The Acer Aspire VX 15 (VX5-591G-75RM) is midrange gaming laptop that does okay for itself but doesn’t really do anything extremely well to stand out from its competition. To top it off, its minimalist-ish matte black design may not appeal to everyone. However, what it lacks in standout features and performance, it makes up for with a very attractive price tag, easily making it one of the best value midrange gaming laptops on the market today.

Acer has ramped up their efforts in the gaming laptop market in recent years, with them releasing some of the best value portable gaming machines we’ve seen in a while. The Acer Aspire VX 15, which was announced by Acer at CES 2017, seems keen on continuing that trend this 2017. 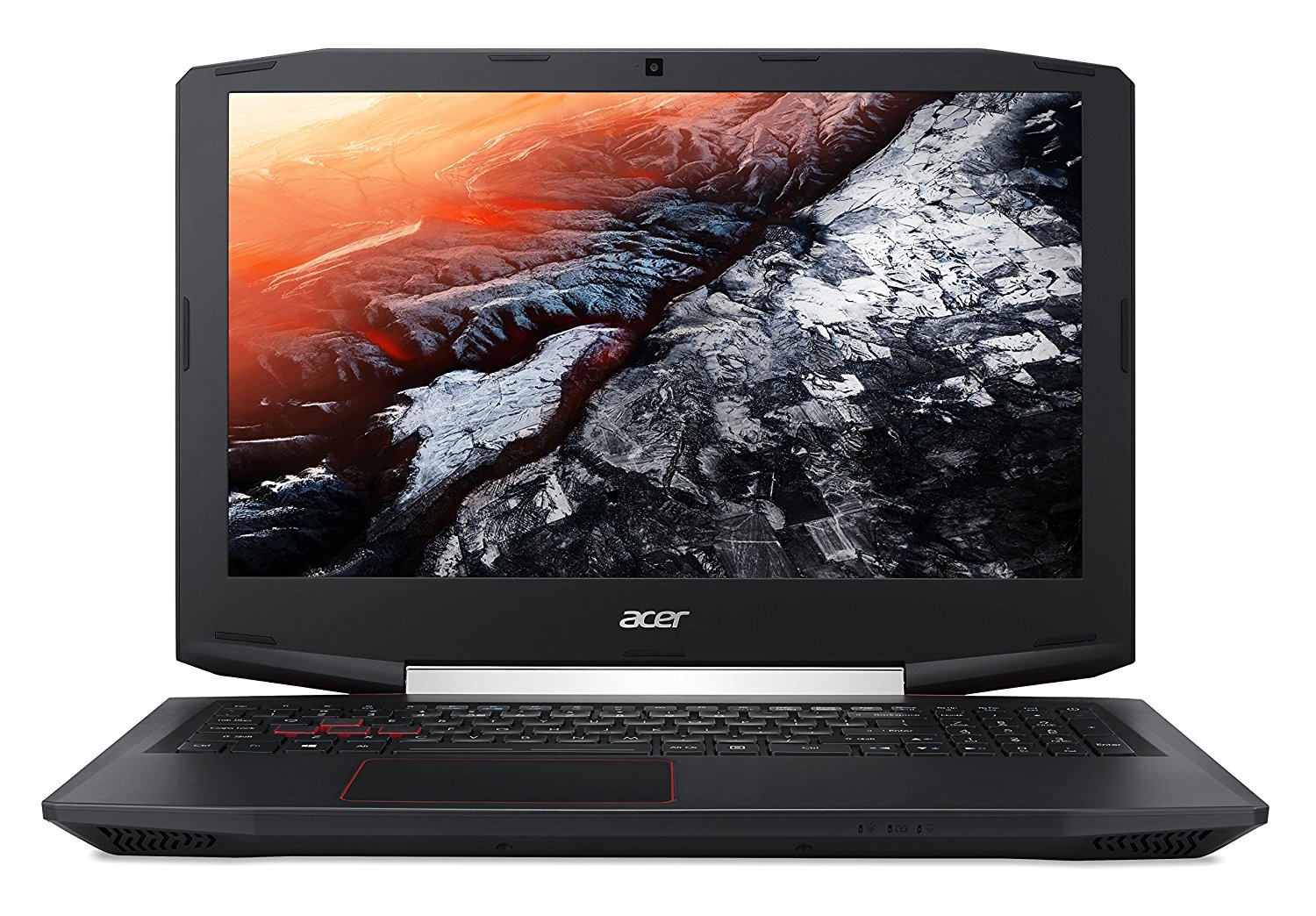 But, as with any other gaming laptop in the market, the question for most consumers such as yourself is, is it worth buying or are you better off with what other manufacturers are offering?

Find out the answer by scrolling down below!

Despite being a budget midrange laptop, the Acer Aspire VX 15 definitely doesn’t lag behind in the looks department. Housed in a plastic chassis, the laptop feels very durable to the touch and doesn’t feel like its price. Meanwhile, the minimalist-ish matte black profile and matte surface make it look unique, helping it stand out while adding a premium look.

Of course, being that its design was derived from Acer’s Predator line of gaming laptops, the Acer Aspire VX 15 isn’t totally devoid of gaming laptop staples. The laptop has red keyboard lighting and comes with red accents on its cover, touchpad border, as well as rear exhaust fans. 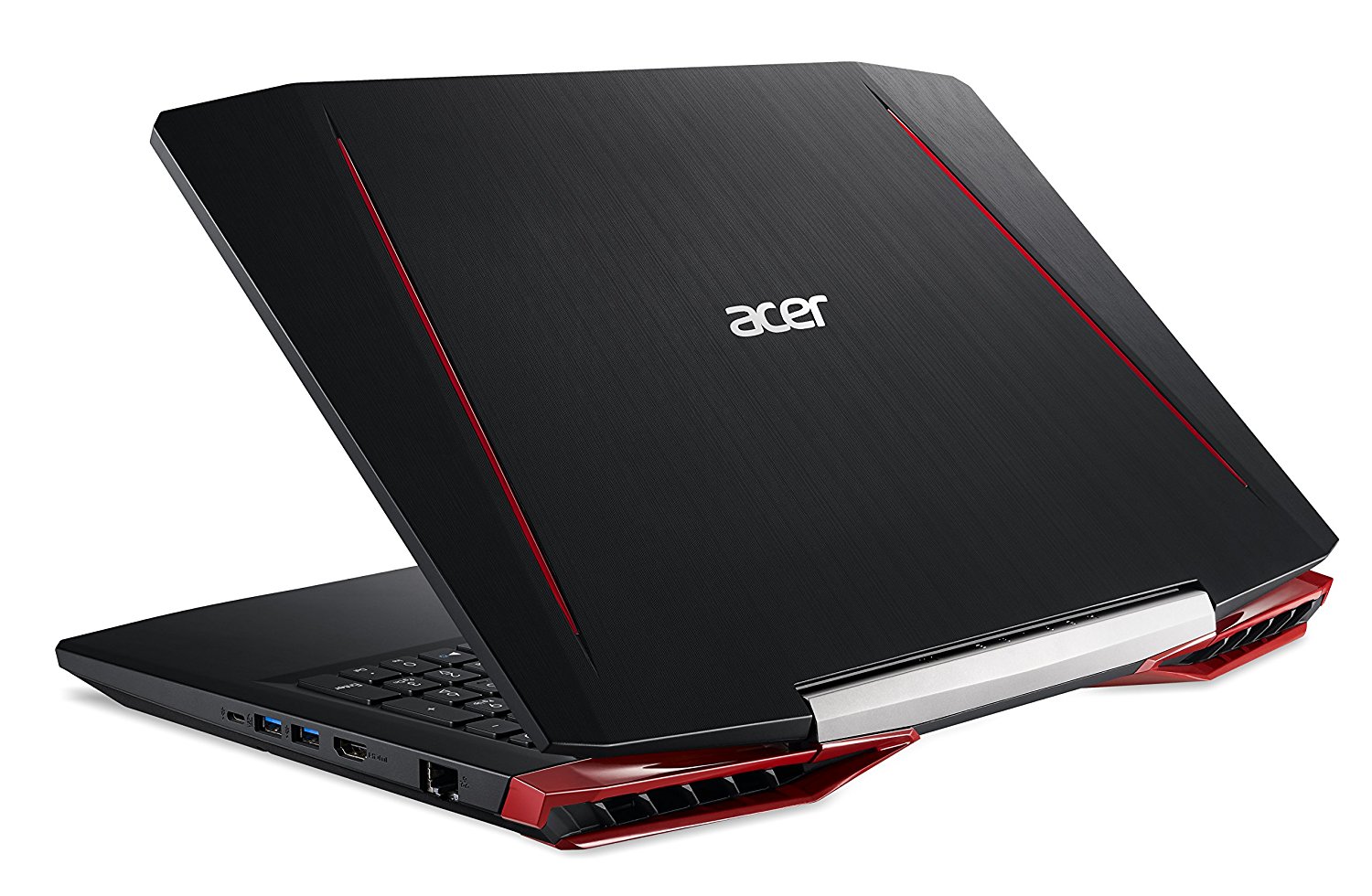 Rounding up the whole look is the silver central hinge that complements the matte black body and red accents extremely well.

The Acer VX 15 sports a 15.6-inch, 1080p Full HD LED-backlit IPS display. It is sharp enough as Full HD displays go, but it doesn’t really stand out in any way. In particular, picky users may skip on the VX 15 entirely simply because of the display, which has been described as dull, and sometimes even dim. Although the average user probably won’t be able to tell the difference.

Just right above the screen display is a 720p webcam that should work well enough for video calls and light streaming.

The VX 15’s chiclet/scissor-style keyboard comes with red backlit keys and a generous palm rest area. The arrow keys and the [W] [A] [S] [D] keys are painted with red accents, while the rest are the typical black and white.

Acer definitely wasn’t lying about the 1.6 millimeters of travel and 65 grams of force required to press the keys. The keyboard feels very responsive and comfortable to type on. Both average and hardcore users won’t have to worry about bottoming out the keyboards during prolonged sessions. Meanwhile, the touchpad, which as mentioned earlier has red accents, feels very responsive and smooth to use. Personally, I’m more of a mouse person, but users who’re fond of scrolling and switching between apps should find the touchpad very smooth and responsive.

If there was a caveat, though, it’d be that the keyboard doesn’t have any programmable keys, which might be a deal breaker for some gamers.

The Acer Aspire VX15 doesn’t have as many I/O options compared to its competition, but there’s more than enough for the average user to work with. On the right side of the laptop, you’ll find one all-new USB Type-C 3.1 port, two USB 3.0 ports, an HDMI port, and an Ethernet jack. Meanwhile, on the left side, you’ll find a Kensington lock slot, a USB 2.0 port, an SC card reader, and a headphone/microphone jack. For wireless connectivity, The VX15 relies on a dual-band 802.11ac Wi-Fi, and Bluetooth 4.0.

The Acer Aspire VX 15 (VX5-591G-75RM) comes equipped with a 256GB solid-state drive, which should provide excellent performance and have plenty of space for your games and most important files. Of course, if it’s not enough, you can always plug in an external drive. Or, you can add another HDD or SDD via an upgrade kit.

The Acer Aspire VX 15 (VX5-591G-75RM) comes with the latest Intel Core i7 7700 HQ processor, which is one of the Kabylake chips. It also comes equipped with 16GB of DDR4 system memory, which means that the laptop should pack more than enough power for the average user. And, even in heavier and CPU-intensive applications, i7-7700HQ should prove capable of holdings its own.

Powered by the very capable Pascal-based GTX 1050 Ti graphics card with 4GB of dedicated memory, the Acer VX 15 is capable of playing the latest gaming titles. The Acer VX 15 is capable of maxing out mainstream multiplayer online video games such as Overwatch, Dota 2, Diablo II, Heroes of the Storm, and Legend of Legends, just to name a few, at constant 60FPS on 1080p. Meanwhile, in other titles, the Acer VX 15 averages 54FPS in Fallout 4, 37FPS in The Witcher 3, 62FPS in TitanFall 2, 69FPS in Battlefield 1, and 35FPS in Hitman (2016), all at high settings in 1080p.

The GTX 1050 Ti might be an entry-level dedicated graphics card, but as you can see, it can still put up good numbers and allow you to play the latest gaming titles smoothly without sacrificing much eye candy. Of course, as this price point, VR is out of the question, and should you encounter more taxing games in the future, there’s always the option of lowering the settings for a smoother experience.

Acer claims that the VX 15 is capable of running at around 6 hours, and that certainly holds true for normal use, such as browsing the internet over Wi-Fi. However, expect the laptop to last half as long while video streaming and for gaming sessions, it’s always best to do so while plugged in.

While the battery life may not jump out of the page, the VX 15 lasts much longer compared to most laptops in the same price range.

The Acer Aspire VX 15 (VX5-519G-75RM) doesn’t exactly boast any standout features. Everything it does its above-average at best. The processor is fast, but it’s not the only one that features an I7-7700HQ in its price range. The Full HD IPS screen looks okay and sharp enough, but it’s not a QHD screen, doesn’t support touch, nor is it even the brightest and most colorful. Even the battery life is just “okay”. However, when you consider all those “okay” features and roll them all up together in one attractively priced machine, you have a gaming laptop that’s hard to beat for its price.