A Sheet of Aluminum tops the back of the Acer Chromebook R11’s screen. This is probably the only noble detail in a product that neither hides nor is ashamed of its humble conception and modest benefits. But for a price around 300 dollars little more can be asked of this hybrid between a laptop and tablet operating under Chrome OS. Let’s not forget: it’s a Chromebook and from Acer, an excellent utilitarian firm.

The chromebook market begins to show signs of saturation. There are many companies that have jumped onboard the bandwagon of computers running Google’s operation system and whose philosophy is to always be connected. Asus, Dell, Toshiba, HP and obviously Google have already shown their cards.

And one thing has become clear: with the exception of a few cases in which the price seems like a rocket heading towards a galaxy of millionaires, the idea here it communing decent benefits -such as a battery that holds a full work session- with attractive prices. The Acer Chromebook R11 tries to wager battle in this area.

The first thing that draws the attention in the Chromebook R11 is its successful minimalist and functional design. Elegant lines, a thickness of 2 centimeters and a weight -somewhat convincing- of 1.25 kilos. Despite this last detail, it is really a convenient and affordable product, of those that liked to be carried around (if you aren’t the typical fanboy of certain brands with allergy to more functional products). 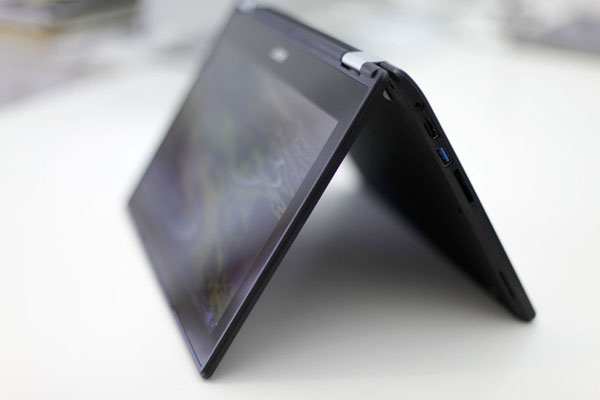 A simple device that thrives and depends on Google’s ecosystem, and that will allow us to carry out a handful of essential daily tasks: checking email, read the news on our websites’ header, edit some odd size photos with online applications like Polarr, work with texts, watch movies with Netflix, listen to music through Spotify… The idea is clear.

To accomplish this the Chromebook R11 has a folding touch screen capable of turning 360 degrees and mutate from a computer into a tablet. Sounds fantastically well, but it doesn’t always work as planned. Or at least not on the unit we have been testing. 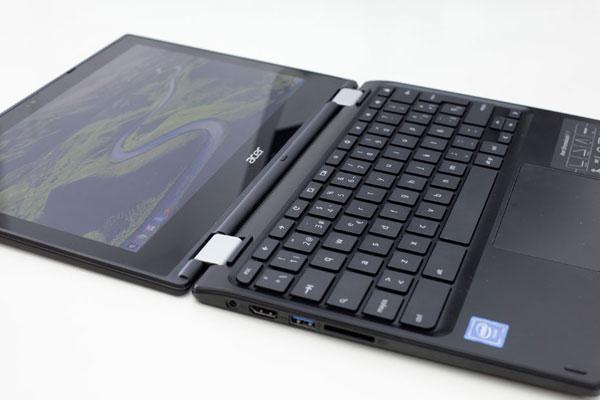 When we turn the screen and switch from laptop to tablet mode, the physical keyboard, -which has a very accurate standard size and a very nice touch- should automatically lock and allow us to work only with the touch screen. However, sometimes the physical keyboard is accidentally unlocked, and to solve the problem the Chromebook must be placed in laptop mode again to get everything back to normal. It does not happen very often, and we insist that it can be a failure attributable solely to the unit that has passed through our hands, but it’s something that we prefer would have never happened.

The identified problems don’t end there. Also the virtual keyboard on screen does its thing: it comes and goes when it wants and makes it impossible to work with certain applications downloaded from the Chrome Web Store. There’s always the option of seeking alternative applications with which the keyboard doesn’t want to fight, but it is a failure that is difficult to overlook.

Among the many positions and options offered by the Chromebook R11 to work with, the one we liked most is the laptop mode, which allows the touch screen to be used at the same time to perform certain operations, like moving though a website. It’s really easy to get used to, even though Chrome OS isn’t an operating system designed for touch technology and certain operations are best carried out though the physical keyboard.

If we are going to work in laptop mode and on a table, those 1.25 Kilos of weight don’t impose an excessive burden, but when used as a tablet the perception is different. That’s when we realized that this Chromebook has a few spare grams. Also, it should be borne in mind that often the device will be held with one hand, due to the other hand being used for navigation and touch operations.

With an acceptable contrast and brightness -although those 224 nits aren’t precisely its strength-, the Chromebook R11’s 11.6-inch screen is one of the elements that has left us the best taste. 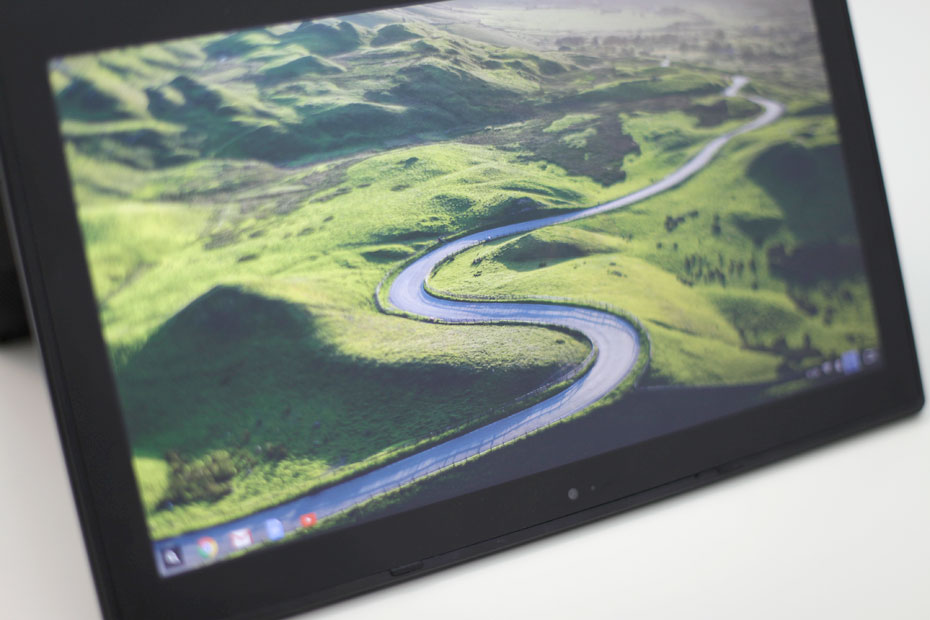 Its resolution of 1366 x 768 pixels is more than enough for most of the tasks that we did with the computer and its IPS panel capable of reproducing a 73% of the sRGB spectrum guarantees intense and beautiful colors in photo editing, video playback and graphic design tasks. Reflexes aren’t as well resolved, but we’ll only be bothered if we work outdoors in an excessively sunny day.

As for the touch technology the response is remarkable, and it is advisable to let all web sites that we visit load so it works with greater ease. It is not by far the best touch panel that has passed through our hands, but we mustn’t lose sight of how much we are paying for it. And when combined with the physical keyboard, we can carry out all tasks with a good pace without complications along the way.

The built in speakers gave us a pleasant surprise. They resound at a good level, even though they’re hidden -and the sound is shut off- when we work in tablet mode. To raise or lower the volume we dispose of dedicated buttons on the physical keyboard.

Inside, the Chromebook R11 we tested features a dual-core Intel Celeron N3050 running at 1.60 GHz, 32GB SSD Internal Storage and 2 GB of RAM. A limited amount of memory for the times, but we haven’t found mayor issues when we tried editing photos of a decent size with Polarr nor browsing through two or three websites at once. The problems actually arise when opening to many tabs in Chrome or when having different applications running simultaneously.

The battery life isn’t bad at all, a determining factor if we consider that we’re taking about a device that can only show it full potential when it’s connected to the Internet: almost 10 hours of browsing and playing music and video. Charging is completed in less than 2 hours.

In the field of connections, it should be noted that the Chromebook R11 features an HDMI and two USB (2.0 and 3.0) ports. It lacks Ethernet, but it has a headphone jack and a SD card slot. And in the wireless section it has Bluetooth 4.0 and Wi-Fi (802.11ac).

Google’s operating system is a good idea which still has many miles to go. Based on the concepts of working always -or almost always- connected and in sync with the cloud, supporters of this philosophy will feel a home with the Chromebook R11.

Some will view Chrome OS’s youth and inexperience as something negative, but it’s actually a point in favor. We’re not facing Windows or Mac OS X, that drag huge backpacks loaded with years and years of versions and updates that revolve around the same idea. Google has free reign to mutate and have its operating system evolve like they please, adapt it to new technologies and make it reach millions of users just using a browser. The prospect is really promising, but for now Chrome OS is still a teenager without much experience.

As we mentioned, the biggest issue with Chrome OS in a product like the Chromebook R11 is that it’s an operating system that lives behind a touchscreen without being designed for such purposes. While it is useful at times to browse websites just using your finger, especially to open new windows and tabs in Chrome, jumping from one text box to another or selecting and editing parts of a texts, for example.

Framed in the world of Google, the Chrome Web Store plays a huge role in this device. And even though it’s not as well stocked as -for example- the Apple App Store, it has increasingly interesting applications for all kinds of jobs, like the already mentioned photo editor Polarr integrated into the Chrome browser, capable of dealing with images of great size with surprising ease. Time should bring new and better applications to Google’s virtual store.

Although at first glance it may seem like just another laptop, we must not forget that the Chromebook R11 is a product thought to work always -or almost always- connected to the web. The philosophy here is to save everything in the cloud and work with applications that run directly on the browser, checking email, accessing social networks and so on that requires internet connection in most cases.

An interesting two for one

The Acer Chromebook R11 is a sincere product that doesn’t promise anything it can’t deliver. It is not without faults, such as the unexpected activations of the physical keyboard on the unit tested when working in tablet mode. However, it has a really interesting price, and it’s a remarkable option even for working.

The idea here is to coalesce Google’s philosophy and Chrome OS with the already ubiquitous habit of touching everything with your finger and hand. And it’s an idea that has been brought to fruition with some ease. The vestiges of the past come in the form of a physical keyboard of the correct size and minimal connections. For its part, the touch technology works in an acceptable way, although you have to give the device some time, which works with a very humble processor and RAM.

Anyway, for those 300 dollars that it’s worth, the Chromebook R11 is a very interesting hybrid between a laptop and tablet. Abstain those who are not yet ready to enter the microcosms of Chrome OS.