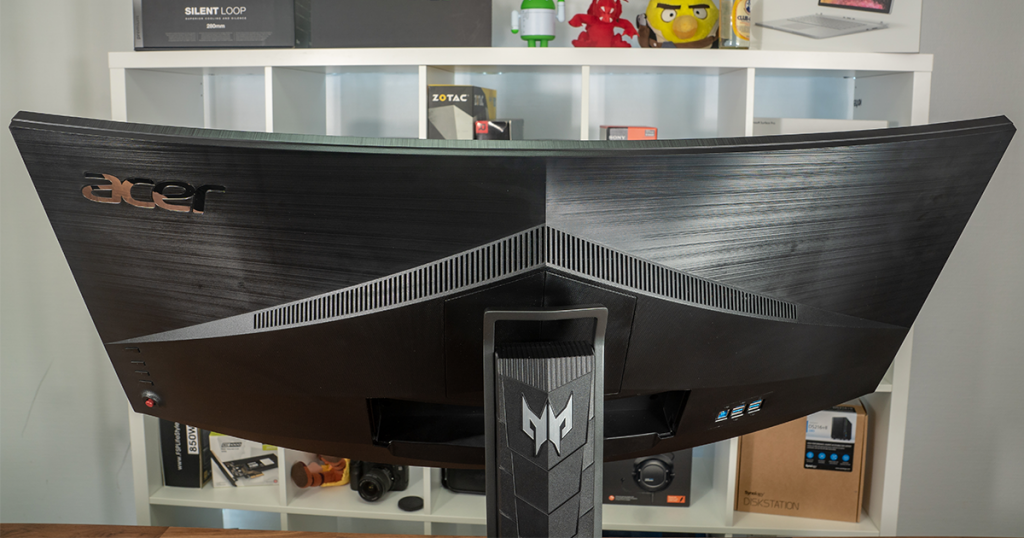 The Acer Predator X34P is unbelievable. 120 Hertz, 1440p resolution, 34-inch, 21:9 curved display and NVIDIA G-Sync. It has almost everything today’s gamer wants, but of course at a price which would shock many. With our test you can find out whether it is really worth 900 dollars.

The Acer Predator X34P really does want to be a predator. At such a high price, it should at least be able to make coffee. To cut a long story short, the Acer Predator X34P is a stylish monitor which does everything right. Unfortunately, though, there are more problems in the B note, which costs it the title of the perfect gaming monitor. Let’s begin as we always do by looking at the specs.

A 34-inch 21:9 monitor does not come in a small box. At least you can still carry it by yourself. In the box you can find, next to the Acer Predator X34P, the HDMI cable, display port and the power cable with a German and British plug layout. You also get a remote control and metal plate, which you need to hang it on the wall. Not necessarily a lot, but it is enough.

The Acer Predator X34P does not have a classic assembly. It arrives fully mounted. You can simply take it out of the box. After that you just need to take off the plastic packaging on the back and connect the power and video cables. And that is it: finished. You can also put the plastic cover back on if you want to.

The Acer Predator X34P already looks very chic on a clear desk. Its slim foot is very slender, but if you hit the table, the display very quickly stops jolting. On the front there is the predator logo and lettering at the bottom in the middle and to the bottom right a status LED. There is not much more on the front apart from a small G-Sync sticker on the bottom left.

At the back, there is a USB hub on the right side with 4 USB 3.0 ports. On the right side there are also other elements in the form of 5-way joysticks and a total of four buttons. Acer has also subtly placed their logo over the control elements. Also on the back is its stand, also with a Predator logo. 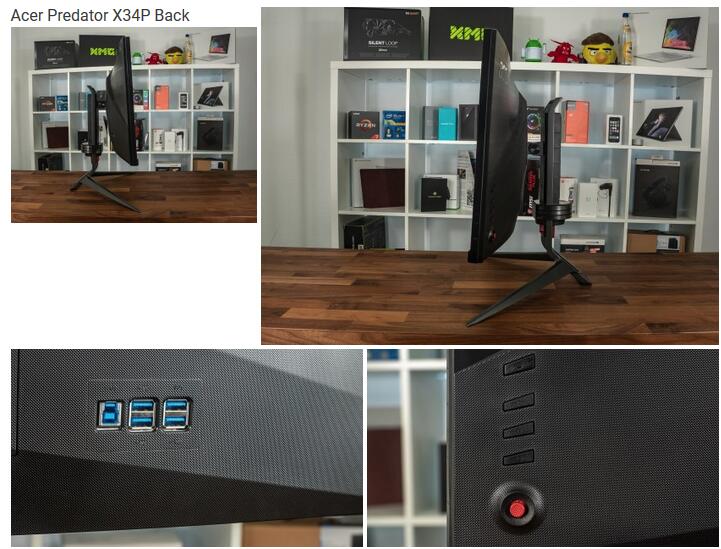 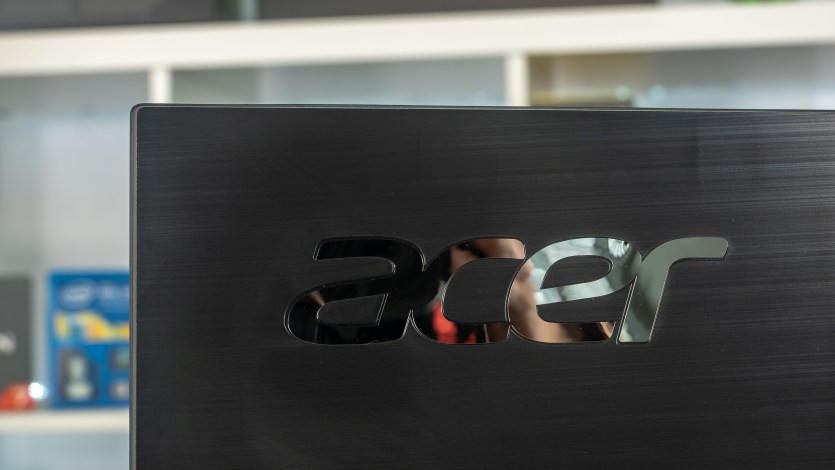 I would not call it an understatement, it has all the gaming accessories already. In the middle of the back there are connectors under the aforementioned plastic cover. With the cover, the back looks very clear. Above the connectors there are air vents.

Acer advertises the Predator X34P with a “zero frame”, or an almost rimless frame. The frame is also very small, but only because a part of it is hidden under the display. It feels like a cheat and it is actually unnecessary for the Predator X34P. With a 34-inch screen diagonal, users who use these monitors side by side are rare. 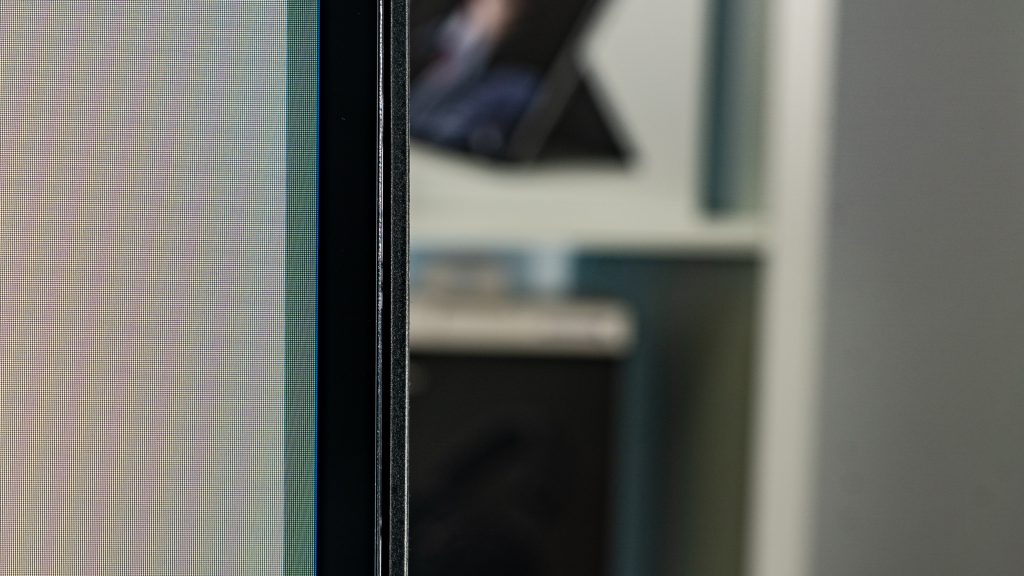 On the underside of the display there are also a few LEDS. Now it is a gaming monitor. The LEDs can light up in different colours and intervals, and also in my favourite configuration: off. The stable stand and the 21:9 display do come with a disadvantage, though: the Acer Predator X34P takes up a lot of desk space. Including the stand, you need at least 82cm x 58cm x 30cm free space. 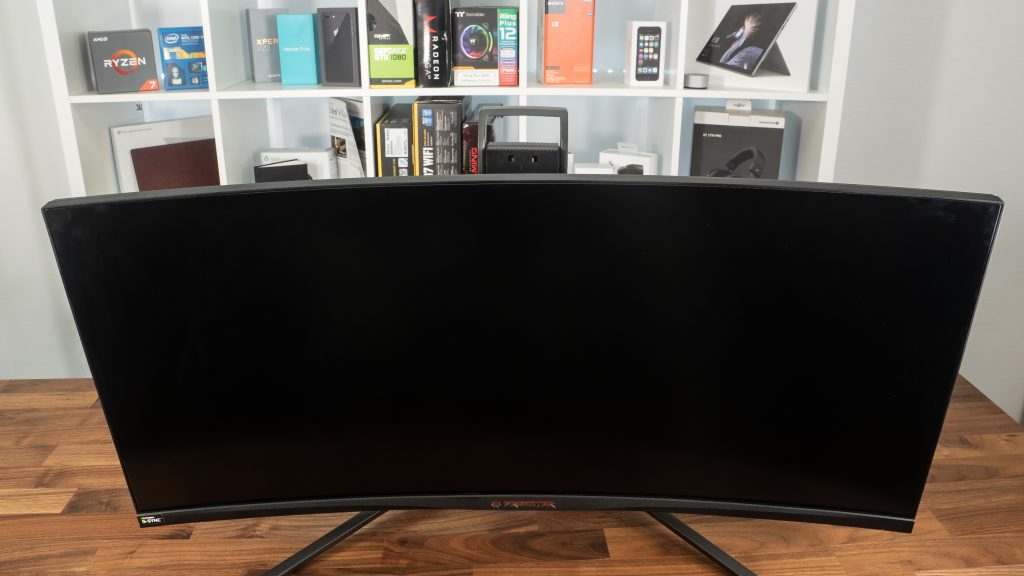 The workmanship is absolutely amazing. Nothing cracks or creaks. The plastic case is also very high quality.

The Acer Predator X34P offers the most important thing in this respect: an HSMI and DisplayPort connector. Other than that, the Kensington lock is hidden behind the cover on the back, which you can use to protect your 1000-euro* investment in its place.

On top there is also a 3.5mm headphone jack, should you want to use the built-in loudspeakers. The two speakers both have 14 watts and sound pretty good. For base sounds though, it is a bit much for it to handle. The mids are typical for this kind of speaker and the highs sound clean.

The menu is clean and well-organised. It can be controlled with the 5-way joystick and three of the four buttons which can be felt at the bottom right from the front. As soon as you have understood that the fourth and highest button is for turning it on and off, it navigates well. You can use the buttons to toggle between input sources, or go directly into the volume control and brightness settings.

The 21:9 curved display is simply an eye-catcher. With its WQHD resolution, the Acer Predator X34P has 110 ppi. Thanks to the high resolution, contents are well recognisable and once the display has been calibrated the colours look natural. 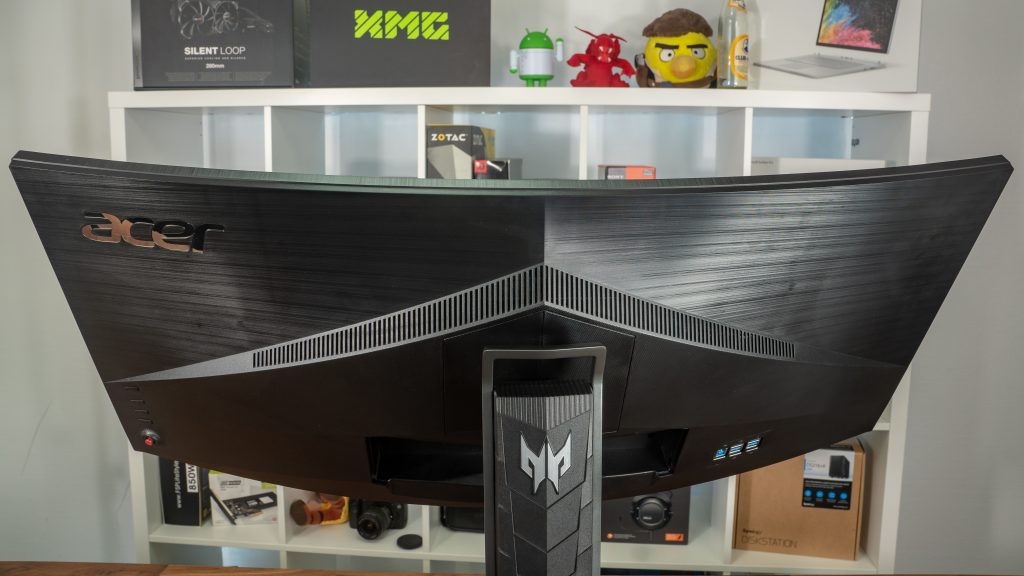 We set up the display with our Spyder5 Elite. The Acer Predator X34P boasts to have achieved 100% sRGB colours, and that is has done. It has 75% for NTSC and 79% for AdobeRGB, none of which are bad figures – but for 900 dollars* you would have hoped that it would be very good at more than sRGB. Because of its curved display, the Predator X34P is less suited to image and video editing. 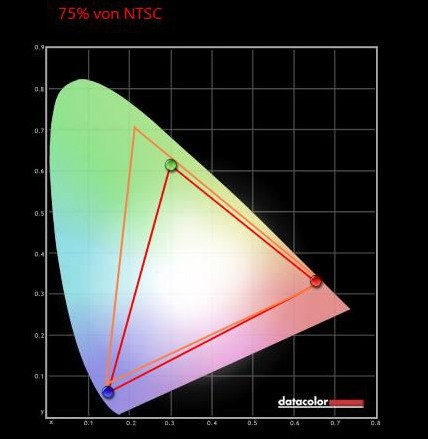 It can show its strengths a bit better when gaming. The display is said to have up to 120 Hz. The Acer Predator X34P generally overclocks with 100 Hz and can be overclocked at 120 Hz on command. Together with NVIDIA G-Sync, the frame rate of your graphics card and monitor is adjusted and it produces a calmer image without tearing in video games. 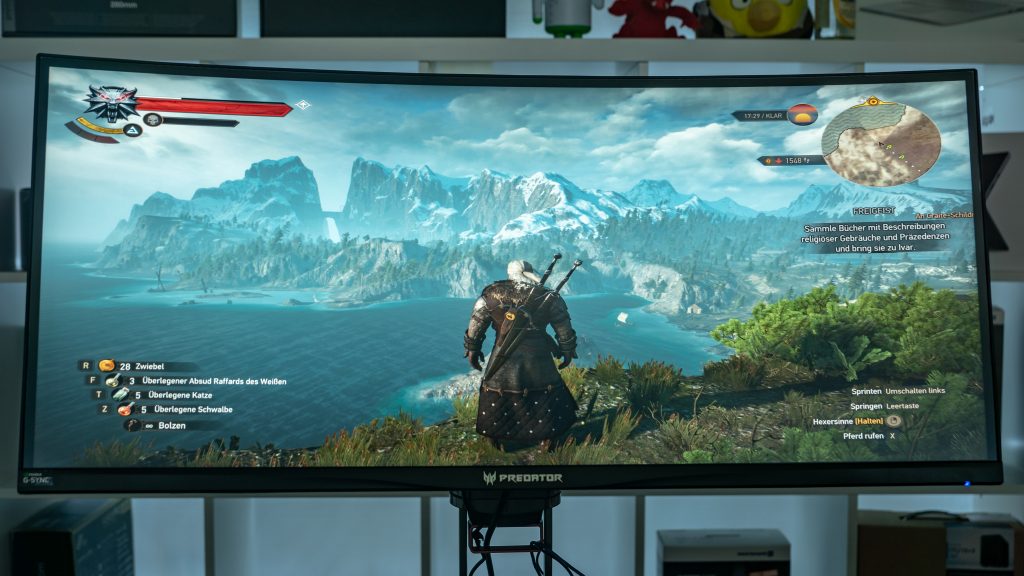 Not all games can scale content to 21:9. If you can, cut-scenes might be played in 16:9 format, bringing the black bulks on both sides.

The 21:9 aspect ratio can also shine in other respects. With it, you can edit images with your source material on 100% and still have more space for your works.

21:9 is also a bit better for films. When watching a modern film on a “classic” 16:9 display, there are black bulks on the top and bottom, the so-called cinematic letterboxes. These can occupy up to a third of your screen. That is how a 40-inch TV can quickly become a 27-inch monitor. The Acer Predator X34P does not have that and enables you to enjoy your media even more. 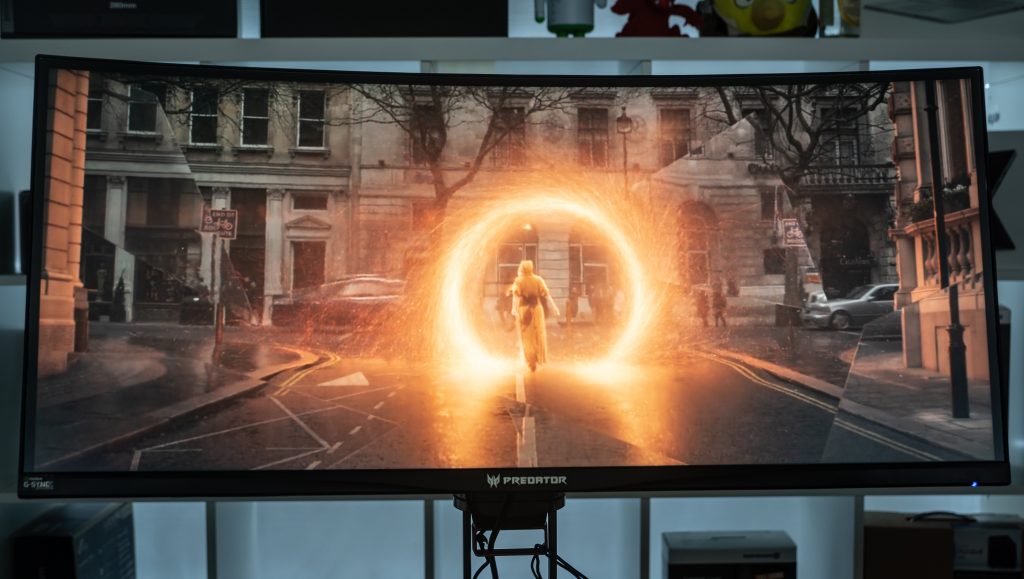 Unfortunately it did not work so well with YouTube. Even when the videos were set at 1440p, they were barely ever optimised for WQHD resolution. This brought back the black bulks, as with the aspect ratios of video games.

IPS technology has been put into the display. The advantage of that is of course the colour quality and the high viewing angle stability. The disadvantage is that it is accompanied with a response time of 5ms. That does bode too well with roleplaying games or action-adventure games, but a really fast ego shooter like Counter Strike: Global Offensive is simply better to play on a monitor that reacts quickly.

What definitely lacked in my opinion is the support for HDR. As the consoles from Microsoft and Sony are put between them, I just do not understand why this was not possible for a 1000-euro monitor, which would not need a budget. It is probably because the production process of these very special panels is not yet sophisticated enough to integrate this function as well. If there is HDR on the next version of the Acer Predator X34P, I would also hope for 12-bit HDR and not a half-baked interim with 8-bit.

The Acer Predator X34P is a beast of a monitor. With an aspect ratio of 21:9, it is stylish and with G-Sync it looks more than just good. Unfortunately, the “zero frame” barely ever works and I miss the HDR simply because of the price. The Acer Predator X34P is good and in many areas, very good. For multimedia and gaming I could not wish for anything more. The curved display and the high image frequency particularly impress me, but do not completely sway me in terms of the price.

At the end of the day, the Acer Predator X34P is a luxurious item. The panels are (still) hard to produce and therefore cost more to produce than a 27-inch display with full HD and 16:9 format.

Is the Acer Predator X34P the next must-buy for every gamer? Not really. Do we want one anyway? Most definitely!