Today is the day. AMD has officially presented the RX 470 and RX 460; two graphics solutions that are meant to cover one of the mid-range and mid-lower-range segments and are marketed to those players who have a budget of approximately 100-200 dollars.

In the end, almost all of the leaks and rumors that we have been seeing have been confirmed, which has certainly surprised us, but we want to make use of all of the official information that AMD has given us to create a special article with which we hope to ease all of your doubts.

Like always, you can leave any question that you may have in the comments, and I will answer them without any problem. 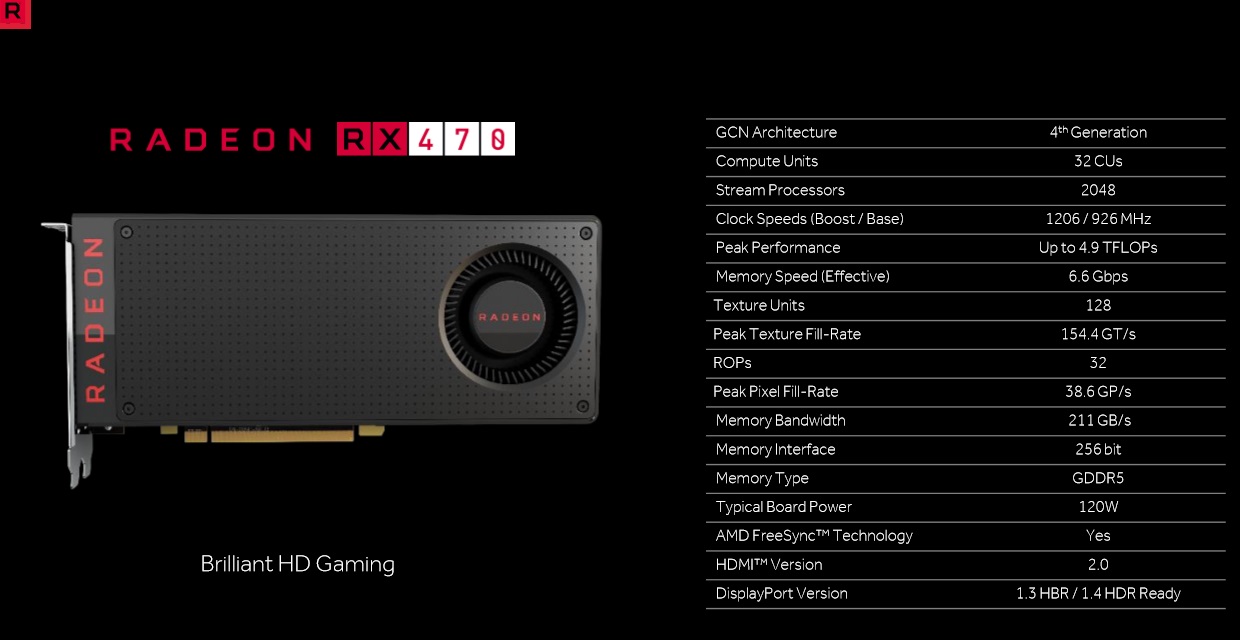 The RX 470 has proved itself to be a graphics solution that’s very similar in specs to the RX 480. As we can see in the photo, it has 2,048 shaders, keeps the 256-bit bus and has 128 texture units and 32 raster units. This means that its performance should be slightly inferior to that of the RX 480 4GB GDDR5, but we can’t tell the exact difference.

In any case, I sense that the RX 470’s performance will be very similar to that of the GTX 970 from NVIDIA. Seeing that its price will be approximately $149, I can confidently say that it is destined to become the dream of every player with a tight budget.

Looking at this performance that AMD has given us, we begin to see that is doubly surpasses the performance of a R9 270, a graphics solution that we recall as being between a GTX 660 and a GTX 760.

Otherwise, we can see that the TDP is 120W and that it uses a single additional 6-pin connector – an important fact that makes it an accessible solution for those who want to update without touching their power source. 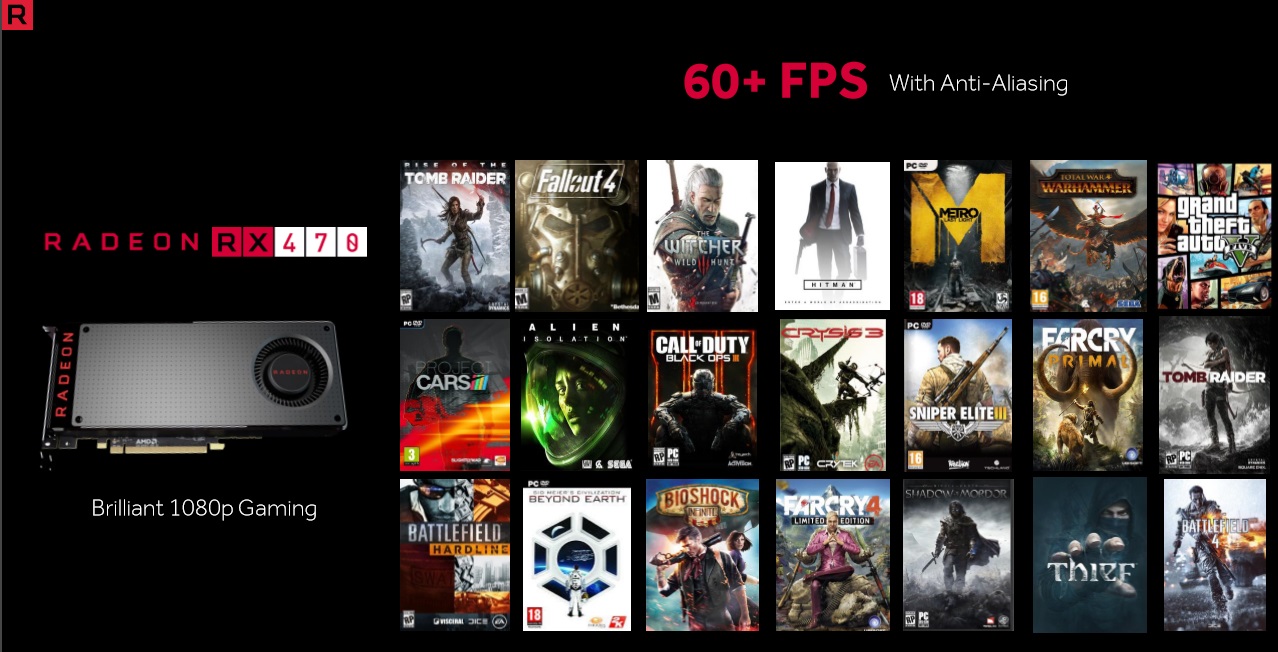 Its release is scheduled for August 4th. 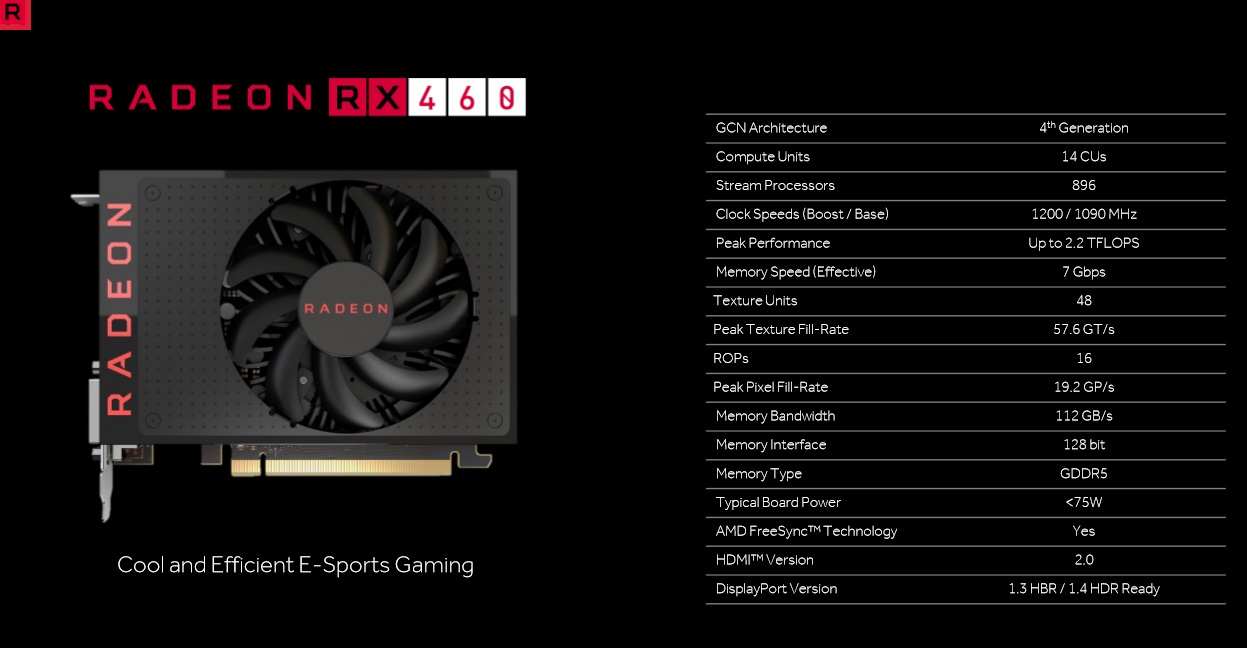 On to the RX 460, a graphics solution that can be qualified as medium-low range, though it’s best that we don’t get carried away into offering such a simple interpretation of it – its performance seems more than enough to enjoy any current game in 1080p resolution, as long as the quality level is adjusted based on requirements.

AMD has shown the RX 460 as a graphics card made for users who want to enjoy the main competitive games that form part of the current panorama of electronic sports, and which are generally not too demanding.

As we see in the power comparison with this new graphics card, we can enjoy games like Overwatch and Counter Strike Go in high quality 1080p resolution and also maintain more than 90 FPS. 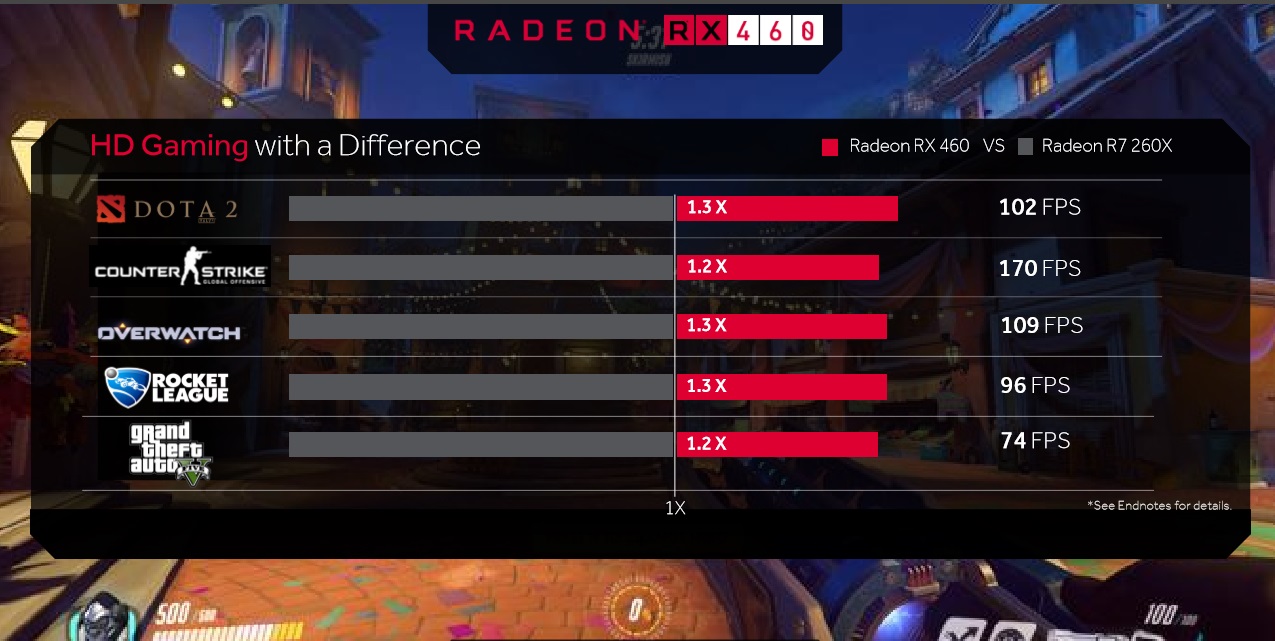 An undoubtedly great aspect that we see when comparing the R7 260 X and the RX 460 is in the graphics. The RX 460 will be up to 30% more superior, a statistic that can later increase with the evolution of the drivers – but at the moment, it can be placed between an R7 370 and an R9 270.

Taking everything into account, that the base version with 2 GB of GDDR5 would have a price of $99, a TDP of 75W and wouldn’t need an additional power connector, we can come to the conclusion that the RX 460 presents itself as a very balanced and interesting solution for those who long to play in 1080p for the least expense possible. 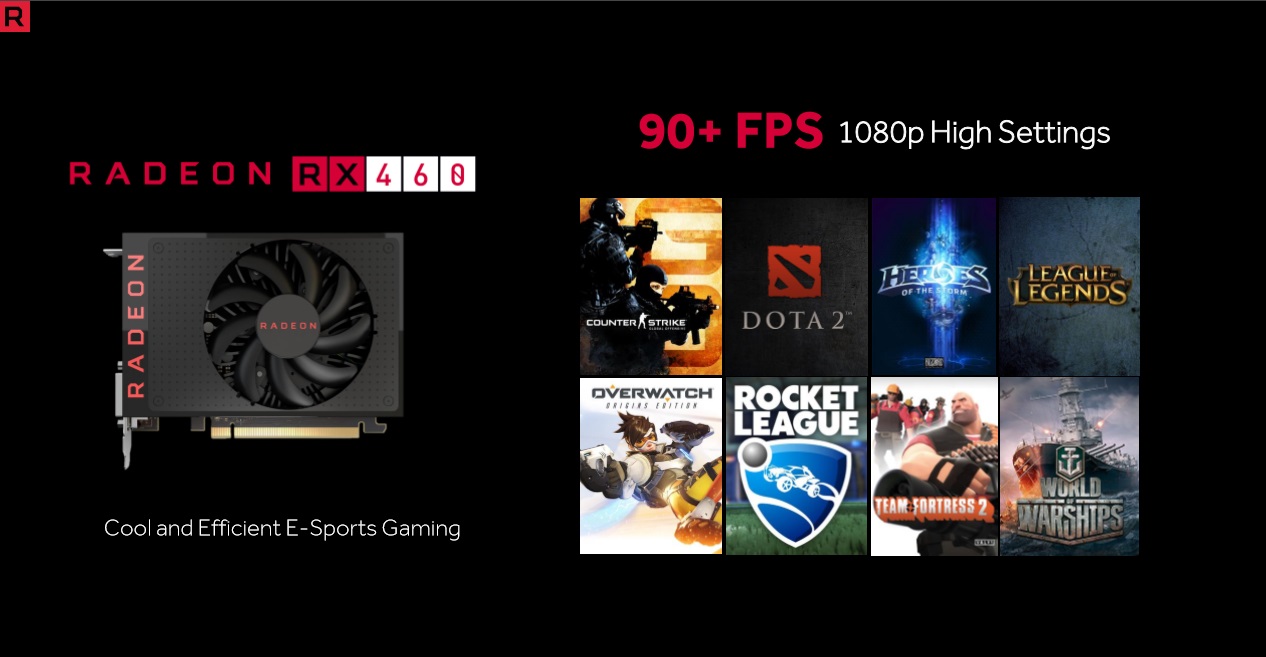 It will become available on August 8th.

Which of the two is the better option for me? A necessary reflection

Before going on, we must show which users the RX 470 and RX 460 are most suited for, and in order to create an explanation that is as clear as can be, here’s a summary:

With this summary, you can choose which option is best for you, though personally, I’d like to do a little more reflecting. 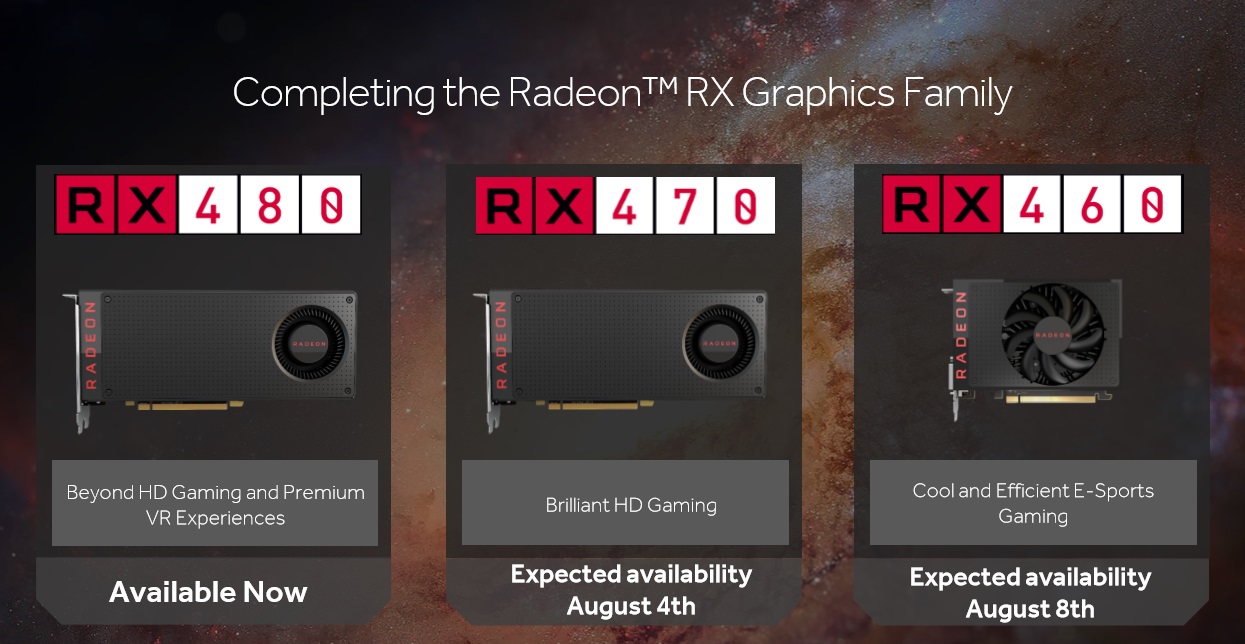 Given the price difference that will exist between both graphics cards and the performance distance that exists between them, it’s clear that the RX 470 is a better investment, especially in terms of its usefulness. In other words, the RX 470 offers better value in terms of its dollars-performance ratio, and unless your budget is extremely limited, you should keep it in mind as your main or first choice. 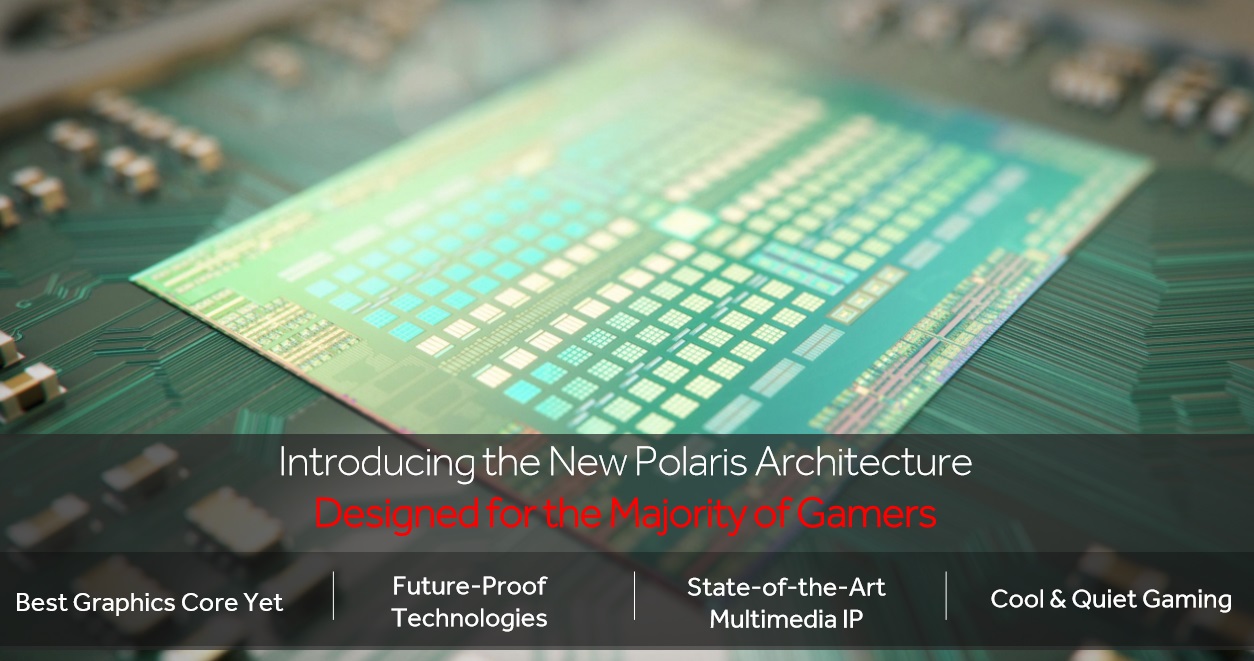 Obviously, this isn’t to say that the RX 460 is a bad option – in fact, this is the opposite concerning the price range in which it lies, but the RX 470 offers that price-quality deal that, disregarding price ranges, is completely superior.