Portable gaming for those not so demanding.

Asus lent us one of there computers that is designed for gamers who want portability, and a great gaming PC to play anywhere without having to suffer to much over having to carry a huge case where we could easily throw in three changes of clothes. Lets not forget the peripherals and the monitor. If you move around a lot, you’ll understand how important it is to have a Portable console. So from this the line Republic of Gamers is born and today were taking a sneak peak at one of its models, the Asus GL552JX.

The Asus GL552JX is great for pc gamers that want these type of characteristics mentioned above in one single machine. Portability and enough power to play comfortably is what makes this line and this model in particular right in the middle of these two properties. It’s exterior design is very attractive, made of very resistant polished black plastic, the interiors are a perfect match, plus with a smooth finish, which make it easier to smudge it when handling it to much.

Additionally, the interior plastic feels a bit weaker than the exterior plastic, especially the pieces used to put together both the keyboard and track pad. This last element in particular, feels even weaker than other parts of the computer, which on occasion misses the precision of contact with your fingers,

Regardless, over all, the assembly is good, and if you take good care of it ( which you should anyway) the should be very little factory defects.

On the other hand, something that must be considered, is it is just covered in plastic, which as you know, plastics are less efficient to dissipate heat, so compared to more expensive computers, covered in aluminum, this could feel more hotter to the touch.

Although, we didn’t have trouble with overheating while we tested it out. Taking special care of maintenance and cleaning will guarantee your computer to live a longer life, especially if you’re a long session gamer. 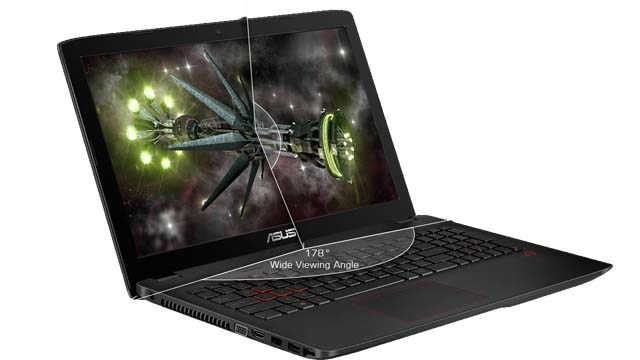 The 15.6” screen is one the stronger points of the Asus GL552JX ,for it is a very high quality monitor, good enough even for the most demanding gamers. With a max resolution of 1920 x 1080, this IPS technology screen has excellent definition, color scheme and contrast. In the tests we did, we found that what was shown on screen whether desk applications or games, had great resolution, with a very crisp clear and defined image.

In fact, you can figure it out when a software fabricator used low definition images for their programs, cause it will just jump right at you the lack of quality in imaging and graphic resources for said program. Also the angles of the screen have an ample aperture which allow it to be seen very clearly and without many reflections, which is always well received. That way, even though it does not have the highest quality of retina screens like the Apple computers, the Asus GL552JX screen is one of the best you could expect for a gaming laptop. (Read More: Best Gaming Monitor)

Internally, this machine is equipped with 2 flavors of the Intel HM86 Express processor, the i7 as well as the i5, at a velocity of 2.6 Ghz with up to 12GB of RAM, a hybrid hard drive of 1 to 2 TB and a Nvidia GTX 950M video card configured with a 4GB VRAM DDR3 or DDR5. As you can see there are several configuration options that you could find at the moment you look for them in stores, and there all designed around the idea of an efficient gaming experience. Sadly, as we know, configuring a computer, for efficiency vs. Performance, usually has an impact, on the way that we can enjoy our games, and according to the tests we perform, that was the case for us in this instance, although the results aren’t as negative as you might think. 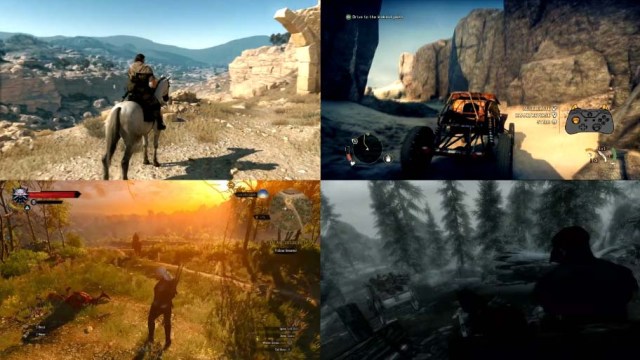 These tests were taken as real cases with games you can get right now and demand a lot of the systems there played on. We picked Metal Gear Solid V, The Witcher 3, Mad Max and The Elder Scrolls V : Skyrim as they are popular games that are ahead of the others as far as graphics go. The exception of course is Skyrim, since it’s been around the block a few times, but we used it so you could see how a 4 year old game runs, when at the time it was highly reviewed as far as graphics go .

Clearly our tests are to see how far these machines can go, so all these games were executed in a 1920×1080 resolution, and the graphics were set to the max. Yes, including the ones that make Geralt’s hair so beautiful in The Witcher 3.

So we found, as we expected, the game with the best numbers was Skyrim, but despite the fact that it’s been out on the market for a while, we could not get it to run at 60 fps with the graphics set to the max. It’s best score was 61, but the average was below that mark with a 35 fps. Cleary as you can suspect, with the other games the results weren’t that much better. On the other side of the spectrum, with the worst performance was The Witcher 3 which barelygot to 12 fps, averaging at 10. On an a more normal range is Mad Max as well as Metal Gear, which got more acceptable numbers. In the case of Mad Max the highest was 52 fps with an average of 28, while Metal Gear Solid V, the most constant of them all, achieved 28 fps with an average of 23..

Of course, this doesn’t mean you can’t reach the golden number of 60 fps, because in any case, except for The Witcher 3, we were able to find a combination of graphic settings that allowed us to enjoy the games in this frame rate and with the desired resolution without sacrificing too much visual quality.

Overall the performance is acceptable except as we mentioned before in the case of Witcher 3 in which case there had to be many sacrifices to get that number, including lowering the resolution to 1600×900, but as you know, this game in particular is one of the most demanding on the market, and if you have the ability to invest in a high quality computer that can run this type of game at 60 fps, all the power to you, but for many others the GL552JX is an accessible option if you don’t mind sacrificing a little bit when it comes to quality.

In brief, the Asus GL552JX is a great piece of equipment with a great design using resistant materials so you can bring it everywhere you go, and even though you might not be able to run the newest games at 60 frames per second, it’s a machine that will give you plenty of years of gaming without needing to make big sacrifices to enjoy most of the latest launches.