Ultra-panoramic monitors are and will be one of my weaknesses. From the first experiences up until now I must admit that it’s a format that I really like. For working with them as well as for consuming media or enjoying the latest PC games. For some weeks I’ve been testing the Asus ROG PF348Q, an ultra-panoramic monitor aimed at gamers.

This Asus display belongs to the ROG family (Republic of Gamers), which offers different solutions such as the PG278Q monitor or the more recent Asus GX7000 laptop which we analyzed here. Going back to one of its distinct features, for some, an ultra-panoramic panel might not seem attractive and they might prefer a 1080p monitor with lower response time and greater refresh speeds. This is totally valid since it’s a matter of personal taste, especially if you also want to use it for playing console games. But if you were looking for something different or you simply don’t want to use two monitors for an extended gaming setup then pay close attention.

The tech specs of the Asus ROG PG348Q monitor are very similar to those of other screens on the market. The differences are, in addition to the curved panel that not all 21:9 include, in the refresh rate improvement which can reach 100Hz with turbo mode and the software extras for its configuration. Still, let’s review the most important ones.

When you sit down in front of a monitor like its logical that you will be surprised at first. With its 34 inch display, the Asus ROG PG348Q doesn’t let down. It’s overwhelming to see that ultra-panoramic image right in front of your eyes. Of course it’s also a bit shocking if you’re used to 16:9 screens.

The design of the Asus ROG PF348Q surely won’t leave anyone feeling indifferent. Apart from its 34” panel you also have the futuristic curved lines.

What I don’t think will raise questions is its particular design. With Republic of Gamer in its name it was clear that they were going to go for a very gamer aesthetic in order to, supposedly, attract more potential clients. Since when it comes to personal taste nothing is written in stone I’ll let you decide if you like it or not. 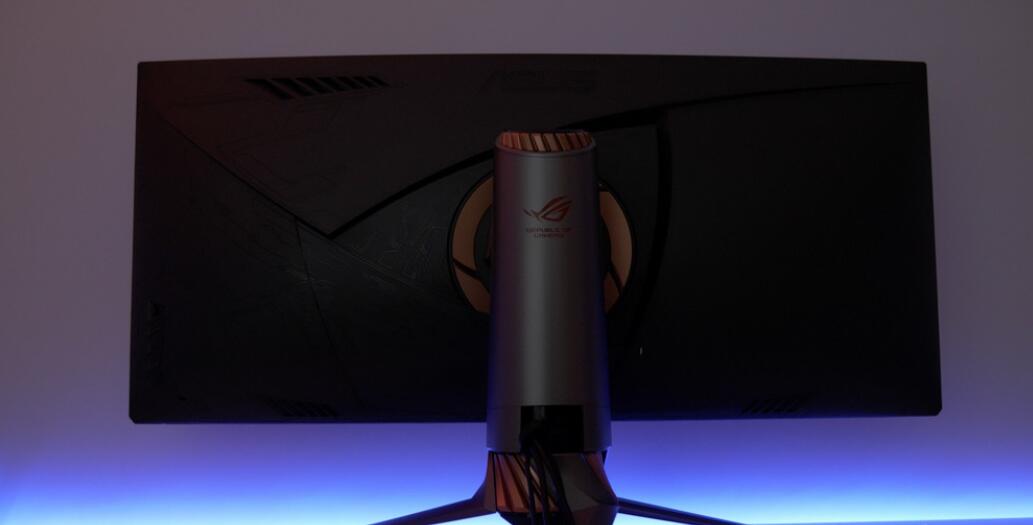 On the front there is nothing remarkable, at least not like in the back. The edges are reduced in order to make it easier to place several in a multi-monitor setup –one next to the other-. Of course you will need a desk that measures at least 170cm if you have two. Imagine if you would choose to have three of these screens.

Then on the backside we see something kind of futuristic. As if it were a printed chip, or rather the body of a transformer or a spaceship. An aesthetic that confirms its gamer orientation. Of course its not the only sign, the base is also worth mentioning.

With three asymmetric feet, the most important part of the base is that it offers good stability and then, with its support, it allows you to adjust the height, rotation and inclination of the screen. So everyone can set the position of the screen to their liking. As an added bonus, in addition to a cable management system, we have a light on the base that will give it an even more gamer look when we’re playing. Fortunately, we can deactivate the light should we not want it.

Lastly, on the back we see a cover that grants access to the connectors, as well as the video connections with a USB 3.0 HUB, which is always useful. The buttons are also on the back –left side- and it also has four buttons plus a joystick that makes it very comfortable to navigate the different menus and options.

IPS Panel and 10-bit color depth. These two points on its spec sheet tell you everything. Although it is important to check for yourself that the quality expectations are met.

In my testing, far from what they would do in a lab, I have compared it with my own personal experience testing screens. So, by running simple tests that anyone could do, I have tested different factors that affect image quality. With the exception of maybe some personal conclusions, I think that most you will share my thoughts about it.

In general, the image quality is very good, it’s a very well balanced screen and very adaptable when trying to find our desired image. Colors, as with most IPS panels, are represented very accurately. Which make it very useful for editing photos or videos.

Also, the brightness level it can reach is sufficient for office and home environments which is most of us. If we look at it from a gamer’s standpoint, it’s highest brightness setting is not great but it’s lowest setting is, since you can still appreciate all of the different details in the image. This is important because most gamers would use it in a darker environment.

With regard to the contrast, it’s the same deal. Blacks are deeper. Also, with a little bit of calibration you can get more complex sceneries where you will be able to appreciate details in less well-lit zones. However, the backlighting is good but when we place a completely black image you can appreciate some clouding in some areas.

I mentioned clouding because I think that it’s my obligation but relax because it’s not something to worry about. Moreover, the amount of clouding it suffers is similar to most screens. Because as we all know there is no perfect screen. Only in OLED panels is there an improvement to this problem. But OLED is still trying to bring prices down in the TV market to be able to complete, therefore it’s going to be a long time before we start using them as monitors. So, don’t worry, in general, the quality that this Asus monitor offers is great. 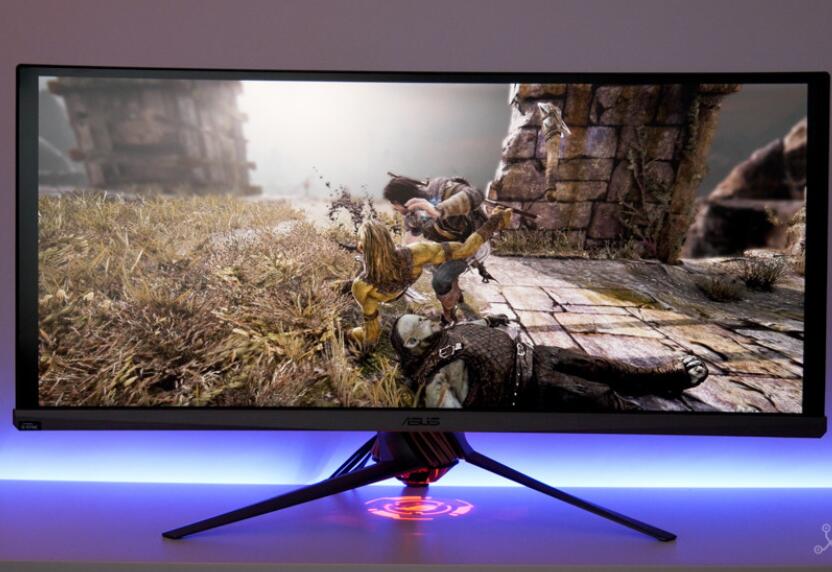 Speaking a bit about the gaming experience, I would go as far as to say that the Asus PG348Q is the monitor that every gamer would want today. For several reasons: 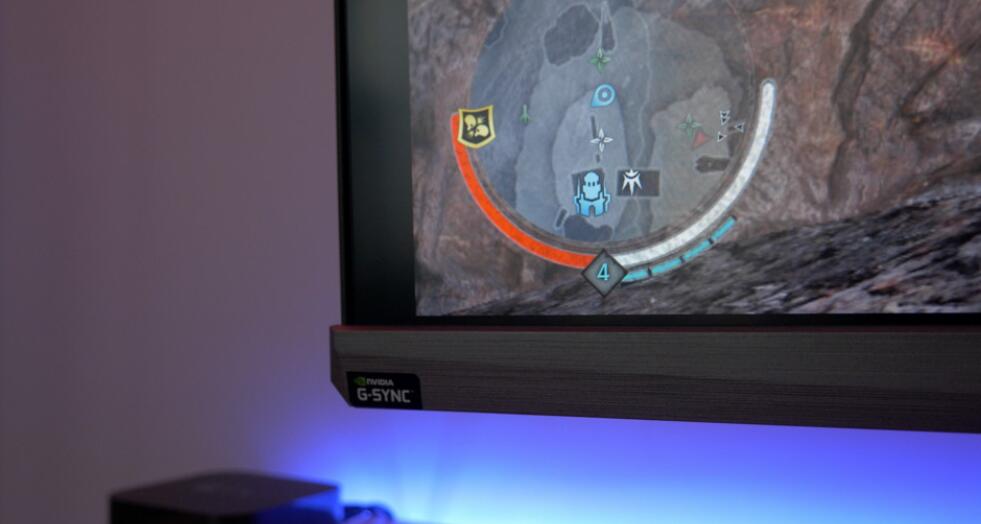 In addition to all of the previously mentioned features there are a bunch of setup configurations and different image modes that will adapt to your preferences or content. Although there is one negative side.

When playing games that don’t support resolutions with a 21:9 aspect ratio, you will see two black bars on the sides of the screen. You can also see this during cut-scenes. So it’s not a very good option if you intend to have it hooked up to a console. 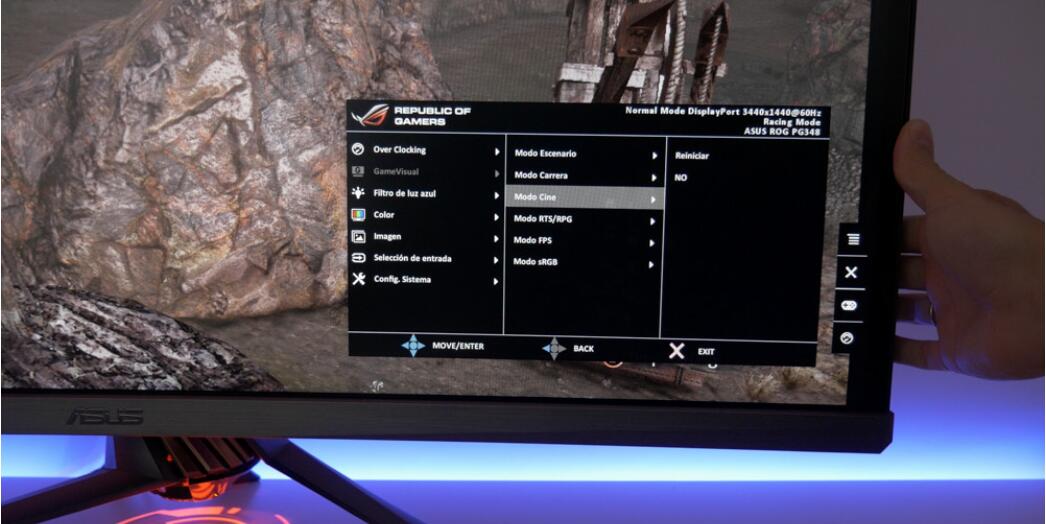 As added bonuses, the software extras offer some interesting features such as a frame-rate counter, a timer that tells you how long you’ve been playing or how long until the game ends as well as an option to place a sight glass to help you while playing FPSs like Call of Duty. 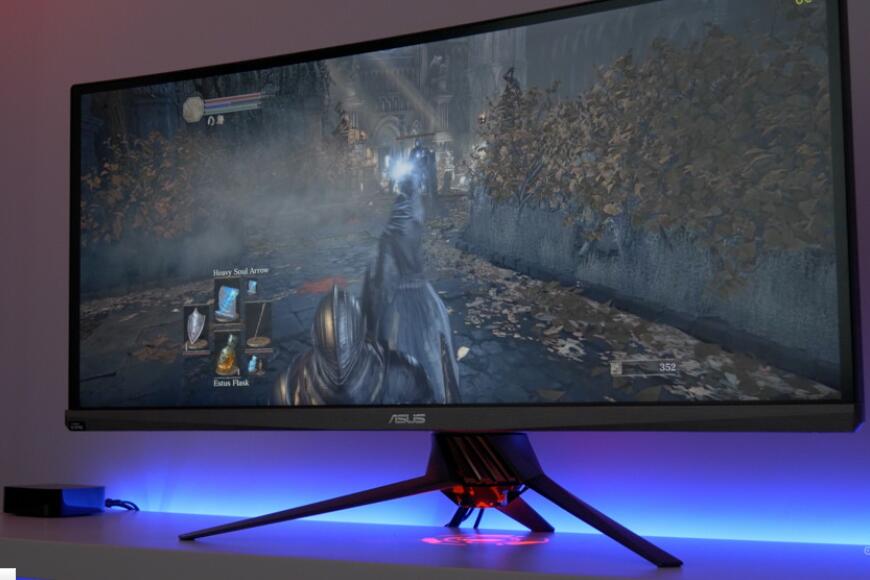 We talked about the importance of having QuadHD resolution on a smartphone, about its quality in terms of color representation, viewing angles, contrast, etc. to an almost absurd level. However, we tend to forget our main screen, the one we use several hours a day browsing the internet or simply playing.

This monitor from Asus, apart from its design and features like the light that projects an image on our desk, is a great option if you’re looking for a monitor for gaming or even working. It is true that if you want it for work there are other options, with the panoramic format or also multi-monitor setups which will boost your productivity. But focusing on gaming, I think the Asus ROG PG348Q is fantastic. Somewhat bulky but in terms of options and image quality it’s remarkable.

The biggest drawback is the price. Its almost 1300 dollars price-tag will drive many people away. Because it is high, almost as much as you would pay to setup a Gaming PC for VR. But if you can, why not? You could also take advantage of its design to place several screens and get a truly immersive experience.