Ultra-wide displays are gaining more and more popularity, with a resolution of 3440 by 1440 they fall mid-way 1440p and 4K resolution in terms of pixel count and typical pixel density. The 21:9 aspect ratio is gaining acceptance as game developers and content creators alike are accepting. Movies already are released at this aspect ratio and most of the 16:9 monitors get black bars on top and bottom while playing them.

The two monitors that we are going to look at here, are almost identical in all respects. The differences are very subtle and both of them are very impressive displays that any member of the PC Master Race will highly appreciate. Both of them have same panels, 3800R curvature, 10-bit colour depth, an insane contrast ratio, and the whole 9 yards.

It should be noted here, however, that you need to have a powerful GPU build to enjoy such a display having an Nvidia GTX 1060 in the very least. We recommended a GTX 1070 just to ensure the best possible performance with the least expenditure.

Without further ado, let’s dive in and look in detail at both these monitors.

There a lot of things that an enthusiast can appreciate about this monitor – The curve, the bezel, the response time and a lot more. The first thing that you’d notice however, would be the aesthetics of this monitor. Being the flagship monitor for the ROG line up at the time of its release, this has one hell of a design and is the perfect eye candy for you to have on your desk. 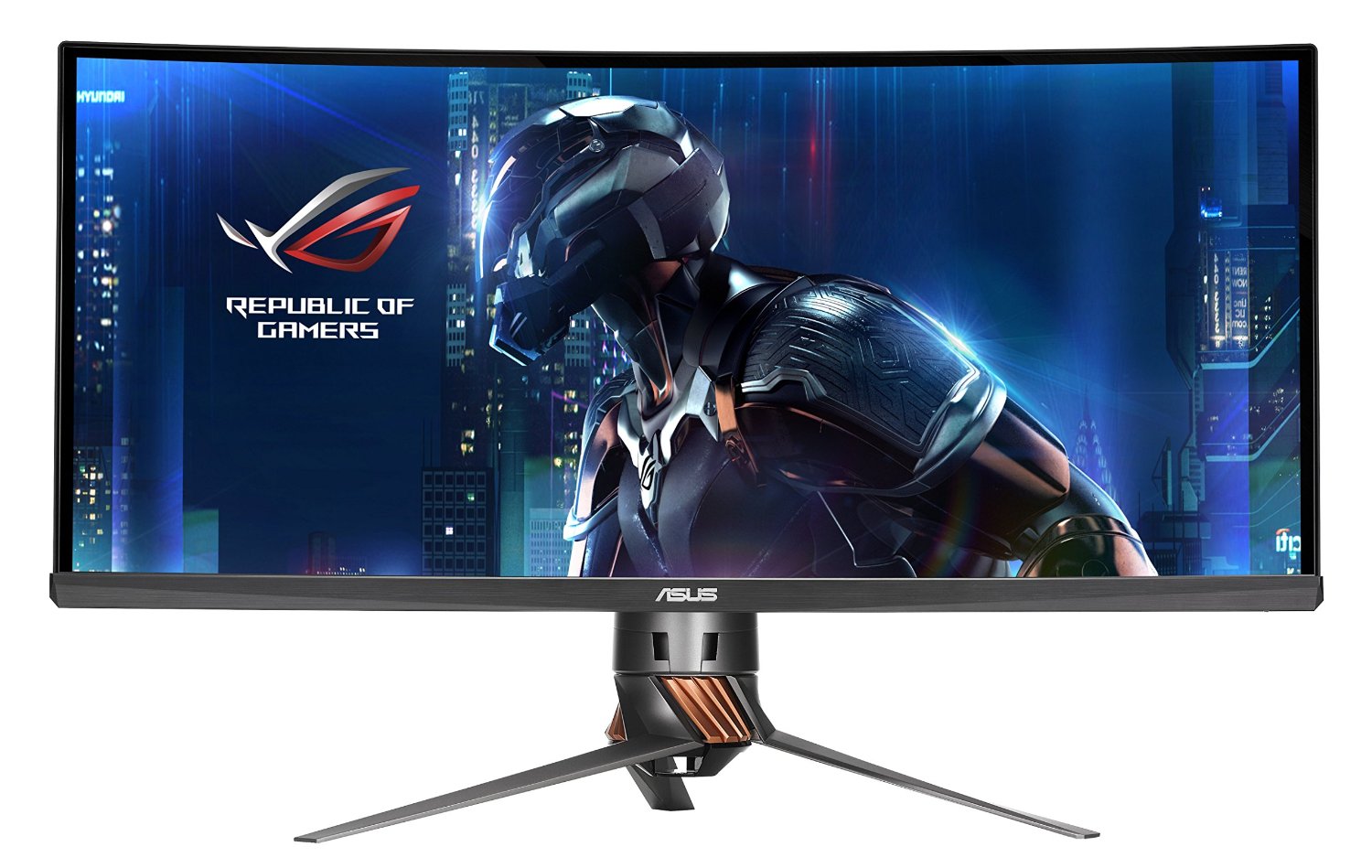 Let us clear one thing; it will require a lot of space on your desk. The 34” screen is not something you can cram on a small office desk, but that is not all. The monitor stand itself covers a lot of area and goes all the way back beyond your display’s back panel. You need to ensure that your desk is sufficiently large both in length and depth to fit this monitor. Jumping on to the RGB branding that is so popular these days, the monitor has an LED in the bottom, above the stand, which casts the ROG logo onto your desk like a really awesome Bat-Signal. The cable routing mechanism is good and cable management is not going to be an issue with this monitor. The monitor has good horizontal swivel of -50 degrees to +50 degrees, -5 degrees to 20 degrees of tilt and the height can be adjusted up to 4.5” this leaves no complain as far as desk ergonomics are concerned. It is worth pointing out that it doesn’t have a pivot option.

Now that we have the look and feel out of the way, let’s dig deeper. The panel itself is a 3440 by 1440, IPS panel which can be overclocked to a 100Hz quite easily using the on-screen display itself. The monitor supports Nvidia’s G-Sync technology which is part of the reason that this is priced at around $1200. Yes, that is quite a hefty price tag but in this case you get something which is worth its every penny. No hidden flaws, no unpleasant surprises. The only drawback, if you want to call it that, is that it has an HDMI 1.4 instead of HDMI 2.0, so if you own an Xbox One S, this can be a major drawback for you.

If you are a PC gamer, however, you would definitely want to connect via the display port 1.2 instead of HDMI. Since the 100Hz refresh rate is supported only over display port. This monitor comes with a tonne of various pre-sets for everything from productivity to individual gaming genre like slow-paced MMO to fast-paced FPS. The controls for on-screen display are, again, well-designed and easy to use something which other manufacturers should learn to implement too. There are also 4 USB 3.0 sockets and a USB upstream for connectivity, but accessing them is quite cumbersome as they hidden under a removable flap on the back of the monitor.

Coming back to the panel, it is an IPS panel with an antiglare coating on it, and that means an insanely good viewing angle of 178 degrees in both vertical and horizontal directions. The panel has a 100% sRGB and is good for both gaming and productivity alike.

For those who have not used an ultra-wide before, but instead have had a multiple monitor setup instead, you guys and gals are in for a treat! The seamless screen with larger screen real estate is simply superior to using a dual monitor set up. Gaming experience is very immersive and if you have a good GPU, with G-Sync turned on, it just doesn’t get better than this. At 100Hz, with no screen tearing and a 5ms grey-to-grey response time this is everything a PC gamer can hope for it to be, the gentle 3800R curve makes sure that it fills your field of vision without distorting the geometry of the displayed objects.

If you are new to PC gaming and displays, or just don’t want to fiddle with a lot of settings, stick to the sRGB mode and you are good to go for all types of productivity and gaming. The only issue you may encounter is with the perspective if you are a designer who needs precise geometrical representation of various shapes.

The Acer Predator X34 is the toughest competitor to the Asus PG348Q that we just reviewed. It has the same panel, same resolution and for the most part, performs equally well and has all the right features that you’d expect from a gaming monitor priced over a thousand dollars. 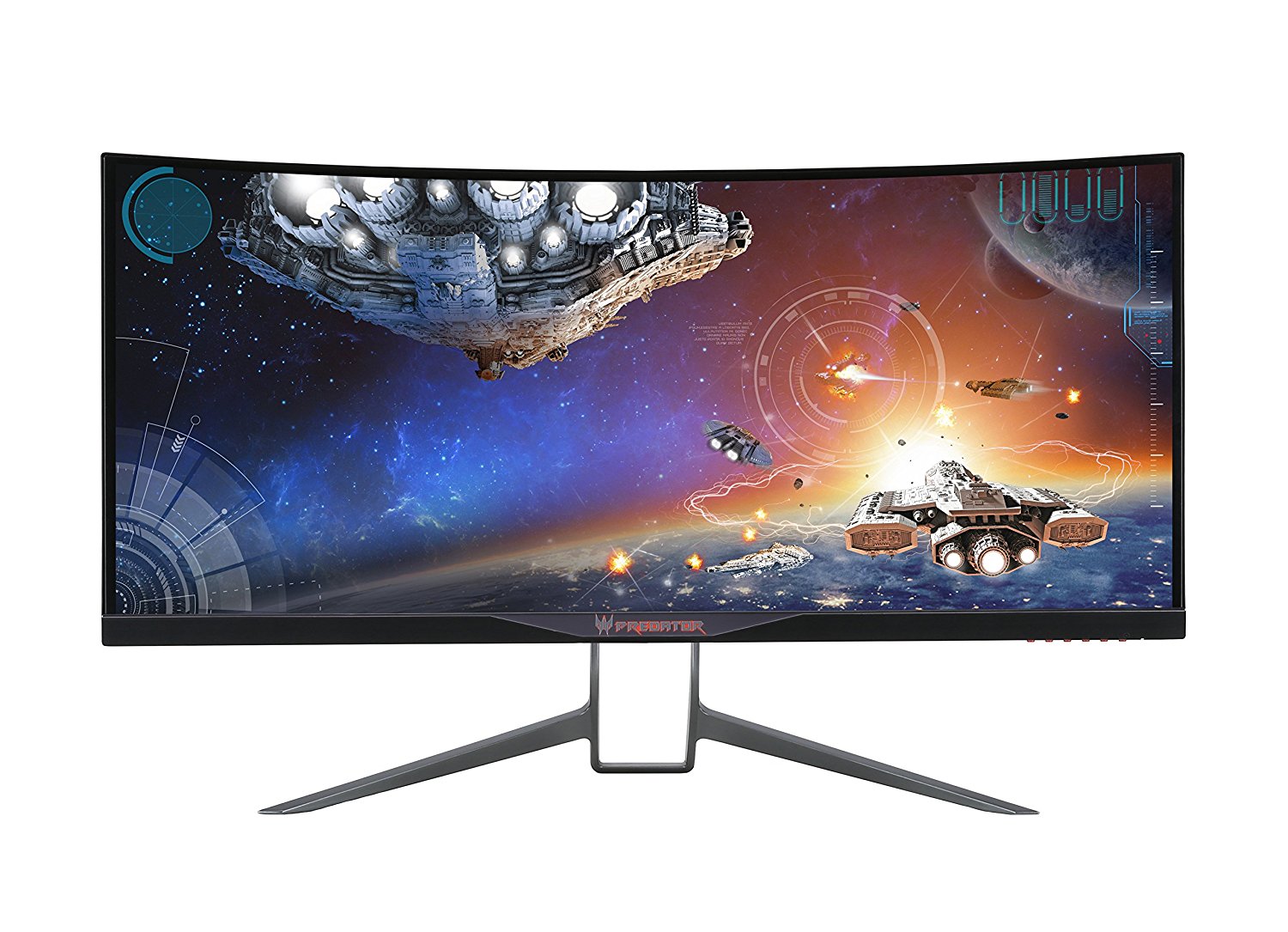 The monitor, on the day of its launch, was regarded as the best gaming monitor out there. Granted that there has been a few issues with quality control and to answer those Acer released X34A a revised version which is essentially the same exact product with those issues resolved. However, even in 2017, after over a year of its initial launch, Predator X34 is still one of the best gaming displays with very few competitors at the given price point.

The monitor, like its Asus counterpart, is quite spread out and will demand most of your desk space (Be prepared for that). The vertical tilt of 5 degrees down and 35 degrees up, the horizontal swivel in both direction, and 5.12” of height adjustment room are all adequate enough to provide plenty of flexibility. It also comes with a 100mm by 100mm VESA mount option, if that is your cup of tea.

The on-screen display is not a pleasant thing use. You will keep clicking the wrong buttons, as they are badly placed, and navigation through various tweaks and settings will take some time. Once again, we’d recommend setting it at its default sRGB mode and adjust the brightness to your liking, if you are too overwhelmed by the options.

Once all is set and done, you would first notice the colour accuracy and sharpness of the display. Needless to say, 34” screen at this high resolution is enough to provide sharp and clear images and the accurate colour reproduction with 100% sRGB can be appreciated at its finest glory.

Enough, about the image quality, how well does it perform in real-time?

For gaming, you may want to use it via the display port so that you can use the monitor’s full potential. Overclocking can be done simply using the on-screen display and with G-Sync turned ON, you will notice no stuttering or screen-tearing. However, it is important to point out that this does require you to have a beefy video card like a GTX 1070 or better. Flickering and stuttering will be the least of your issues if your GPU can’t keep up with this resolution and refresh rate. The grey to grey response time is 4ms so it checks all the boxes, as far as fast paced FPS games are considered. Other connectivity options include an HDMI 1.4, 4 USB 3.0 and a USB upstream.

The giant screen real estate, can be used to play games, while simultaneously having, say, a conversation on discord open. Pretty much any crazy multitasking workload that you may want to manage simultaneously, can be done on this display. The aspect ratio is perfect for having yourself immersed into the gaming. Every square inch of your peripheral vision will be covered.

It also comes with two 7Watts DTS speakers which can provide a decent audio solution if you don’t have one already in place.

Who should get an ultra-wide?

The choice between the Predator X34 and ROG PG348Q is a simple one, get whichever is the cheapest at the time you are ready to purchase. The Predator is about $80 cheaper, on Amazon, at the time of this writing. However, if you don’t care about the price and just want the ultra-wide goodness you can’t really go wrong with either options.

Something worth mentioning here is that the monitor’s insane price tag is only justified if you have a GPU that supports G-Sync and this means an Nvidia card is powerful enough to game at 100 FPS for even the most demanding titles. Assuming that you do have such a system, we can safely recommend either of the monitors. If you have an AMD card look for something with free sync in it, it will cost considerably less as well.

E-sports players may also want something else with even shorter response time, probably a TN panel, but again, that is a very specific use case.

This upgrade is way more significant than upgrading your processor or RAM for that matter. Most of the user experience circles around the computer peripherals and an ultra-wide would make that experience much more enjoyable and productive.