At this year’s CES in Las Vegas, Asus introduced the GL553V, a 15,6” entry-level gaming notebook. Inside it sports a lot of current technologies including the Nvidia GTX 1050 and the new Kaby Lake generation Intel Core i7 processors. Find out what this little guy can do in our in-depth review of the ROG Strix model.

With the ROG Strix GL553VD, Asus is specifically targeting those users who don’t want to spend 2.000$ or more on a gaming laptop. This gaming laptop has only recently been introduced at the CES in Las Vegas and our test configuration comes in at 1.299$. For those who have a little less cash at their disposal, a base model for 1,099$ is also on offer.

Those among you who like simple and purist hardware design will not become fans of this one: Asus has designed the ROG GL553 using a mixture of dark brushed aluminum and strong, red elements that you will find on the lid, the rubber feet, and the speaker and fan grills. 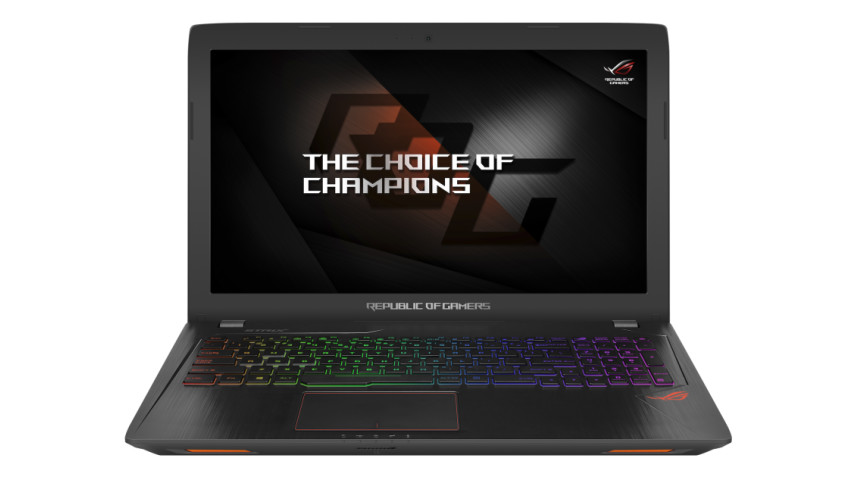 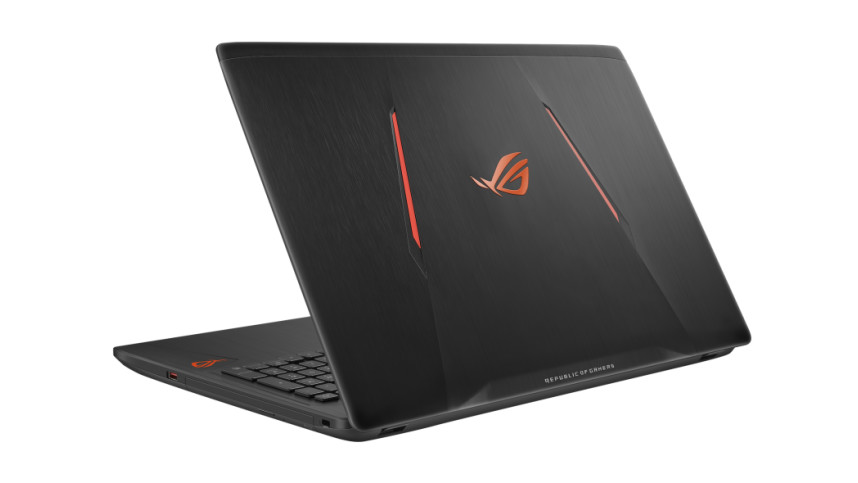 A big point of concern with our team has been the noticeably soft material that the body of the notebook has been made from. With the screen closed, just a light push on the top is enough to press the screen against the keyboard. The palm rest area is similarly flexible.

Even though we the general build quality is nothing to complain about, this computer could not pass our durability test. It is this are where you can feel that the device may have been developed with its entry-level price point in mind. This is something you can live with. You just have to be careful when carrying this 2,5 kg laptop with you. Also, the case is a real fingerprint magnet.

Whereas other laptops are offering 4K screen resolution, the ROG has to make due with a resolution of 1.920 x 1.080 (Full HD). This can be forgiven however, as the 15,6” display is very sharp and has quite realistic color reproduction. Contrast and brightness however, are average. We would have at least wished for a brighter screen.

Naturally, Asus has fitted the notebook with an IPS-panel which offers a wide viewing angle. When viewing it all the way from the side, the only thing you will notice is a slight drop in brightness and contrast. Color alteration cannot be observed here. Awesome: The screen has low reflectivity, can be opened with one hand and can be tilted up to a maximum angle of approximately 135°.

As was to be expected, Asus has fitted this laptop with a gaming keyboard that sports a separate num-pad and offset WASD keys. All of the 101 keys are sufficiently backlit with the color of the lighting being customizable through the preinstalled “Aura”application. That way you can have either the entire keyboard or areas of it lt up or pulsating in different RGB colors. 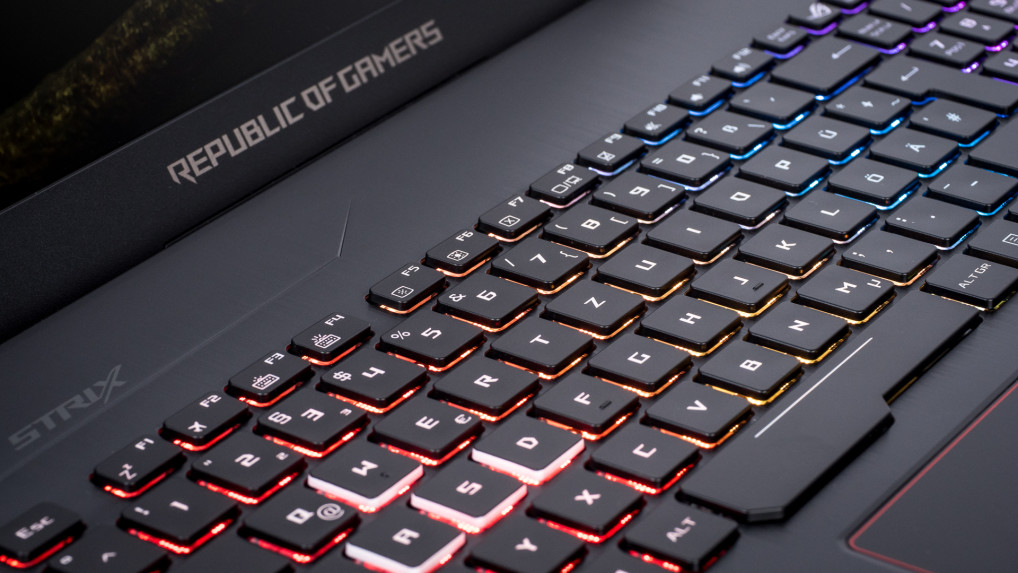 The keys offer a medium amount of travel with soft key klick. This does neither affect working nor gaming negatively in any way. In fact, you will be able to type on it very quietly and with very little fatigue. Those among us who like to hit their keys rather hard will however be disappointed with the laptop build in this area. There is some notable flexing in the center of the keyboard when pressing keys with above average force.

The trackpad offers a good amount of friction. It supports multi-touch but does not have physical buttons. With its size of 12,5 cm diagonally it looks a bit lost on this huge computer. We would have wished for a more generous amount of trackpad-space but gamers will want to use a mouse anyway. That’s where the USB ports come in handy which have been placed on both the right and left sides of the laptop.

No matter what we throw at this laptop’s Core i7 and its fast RAM, there is almost no task besides gaming that it should have any trouble with. It scored a multi-core score of 703 and a pretty good 94.97 frames in the graphic performance benchmark in Cinebench R15. The performance improvement from the previous generation of Skylake i7 processors however is not exactly significant, as was to be expected. A key improvement that Intel made with this generation of CPUs is the energy efficiency which, on a gaming laptop, is sadly only slightly noticeable.

When playing older titles, the ROG has no problems whatsoever. Same can be said for most current games. Even demanding triple-A blockbusters like Rise of the Tomb Raider will run smoothly in 1080p on even the highest graphics settings with the framerate only occasionally dropping below 40 FPS. However, that is all the overhead that the entry-level Nvidia GTX 1050 can offer and you won’t see much higher framerates on similarly demanding titles. Battery life? Well, even with the screen dimmed quite lot, you won’t be getting much more than four hours out of this laptop – four hours of standard usage that is. When gaming, you will need to find an outlet much sooner. In that way, the Asus is not much different to other previously tested gaming laptops like the Acer Predator i5.

The fan kicks in often and quite audibly so. It propels the air out of the case vent on the left side of the laptop. The occasions where you will get to enjoy a moment of silence are writing an e-mail or surfing the web. Even when gaming, the plastic case will heat up significantly. 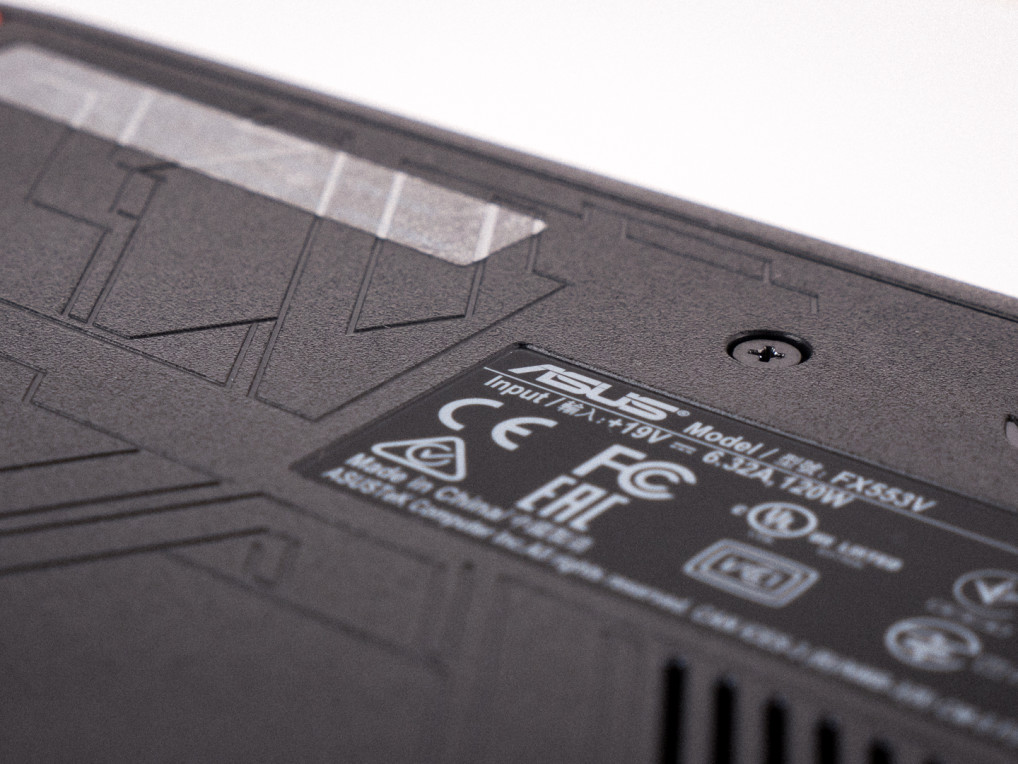 The two speakers that sit in the front of the laptop give a decent stereo image and sound pretty well balanced. They also won’t distort when you put them on maximum volume. For an immersive sound experience however, you will need to plug in decent headphones since the laptop does have a subwoofer and lacks decent bass response.

Even though it might look like it the laptop does not give you a service door. This unnecessarily complicates upgrading or repairs.

The ASUS ROG Strix GL553VD offers quite the handful – especially when looking at the price tag. Current titles run smoothly on high graphics settings and the keyboard and display are well suited for gaming. The biggest point of complaint is the body, which makes a less “professional” impression and does not offer the greatest rigidity.