Although the laptop market has been greatly affected by convertible and 2-in-1 devices, current technology provides smaller components and more efficient processors that make laptops the talk of the town, and models such as those in ASUS’ ZenBook lineup are the centerpiece when talking about outstanding devices sporting thin and light designs.

We already reviewed the ZenBook 3 UX390UA, which is a model that won our best ultrabook on the market prize thanks to its good finish and performance, when it was launched. This year, the company announced that model’s successor: the ZenBook 3 Deluxe UX490UA currently sitting on our hands, with which the brand takes advantage of the new bezel-less displays and of additional connectivity options, updating their flagship ultrabook. 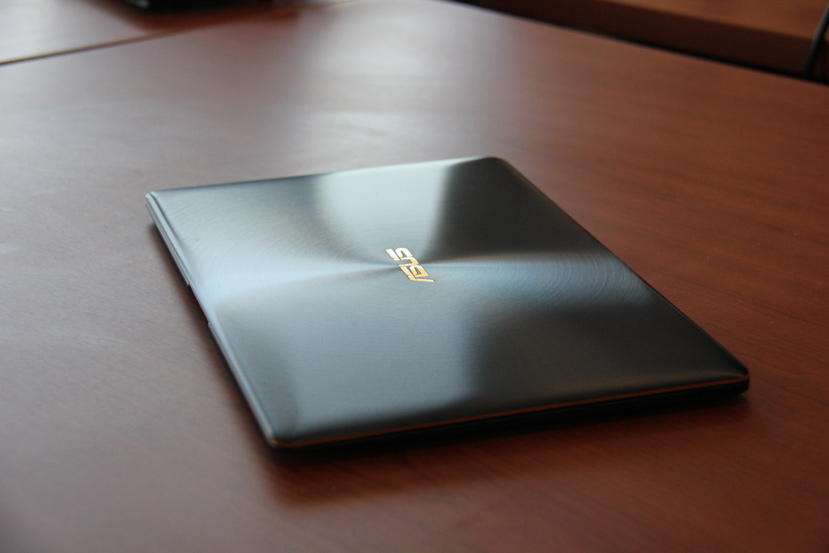 The ZenBook 3 Deluxe UX490UA’s general design barely changes, because, as some say, if it’s not broke, don’t fix it. 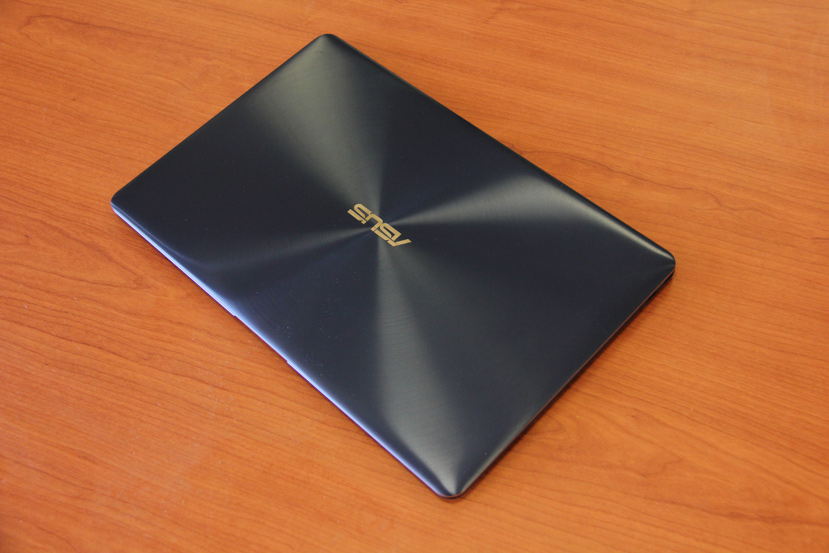 It still has a premium feel thanks to its polished aerospace-grade aluminum unibody chassis, its golden diamond-cut edges and its concentric finish, giving it a unique touch when we compare it to other average ultrabooks on the market. In this case, we have the blue variant, which undoubtedly gives it a very original touch.

The combination of blue and gold can also be seen on the keyboard and the trackpad, which has a fingerprint sensor built into it. 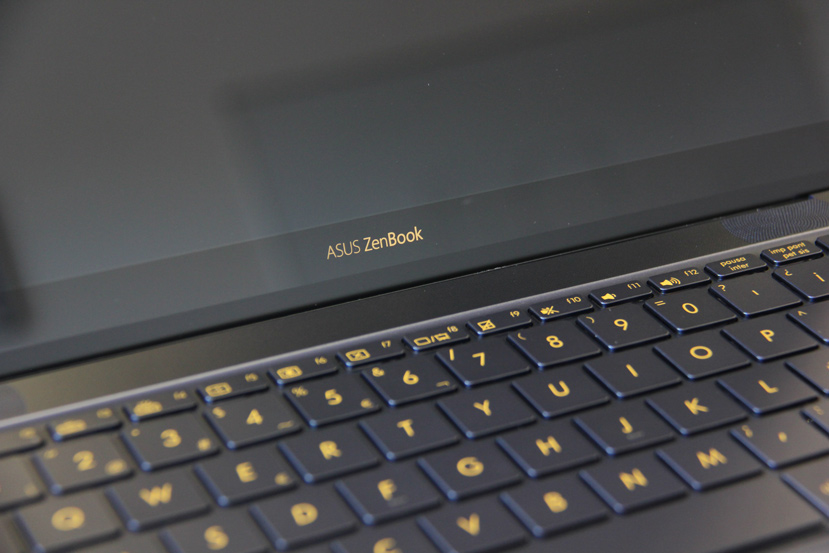 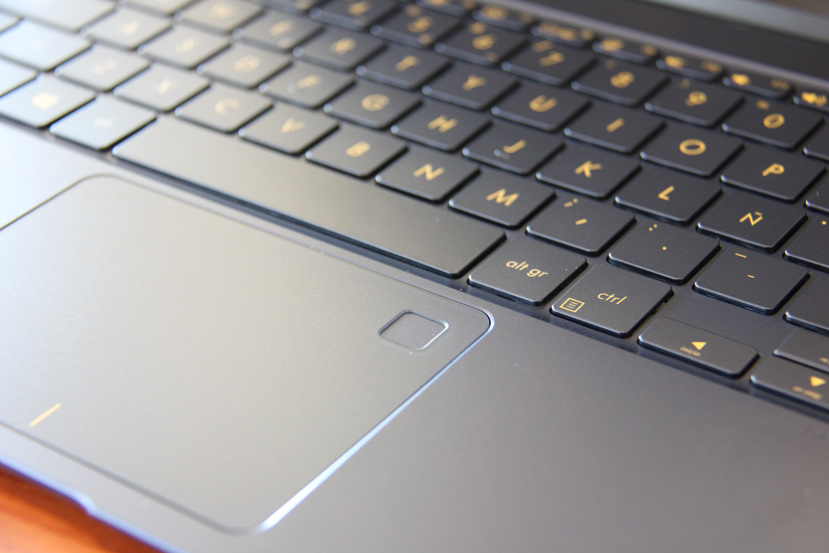 The display is one of the ZenBook 3 Deluxe UX490UA’s main changes when compared to the previous model’s 12.8-inch display. The new model increases its display size to 14 inches while keeping its body size the same thanks to a new bezel-less display design. 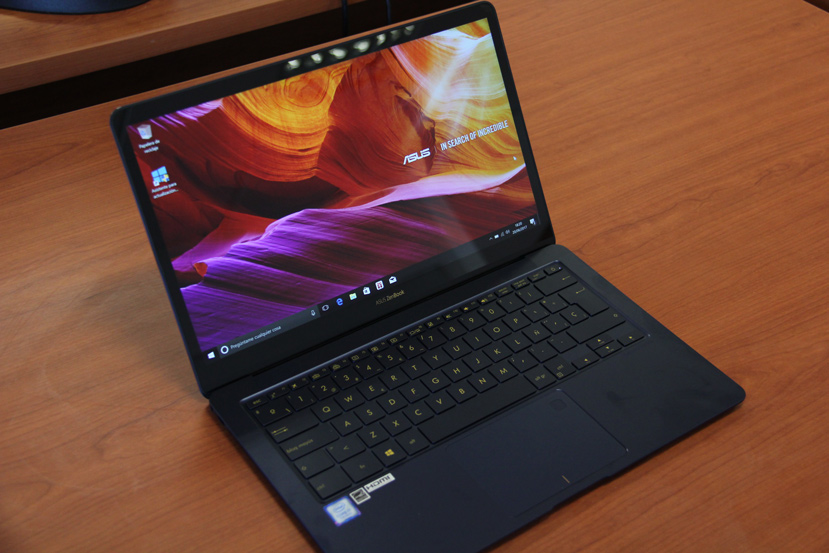 Despite being reduced, and although the bezels are now thinner along with an 84% screen-to-body ratio, the 7.46 mm bezels do not seem remarkably thin, as there are other alternatives on the market that have achieved even thinner bezels, such as the XPS 13. However, we are thankful for having a bigger display size without sacrificing the device’s overall size. 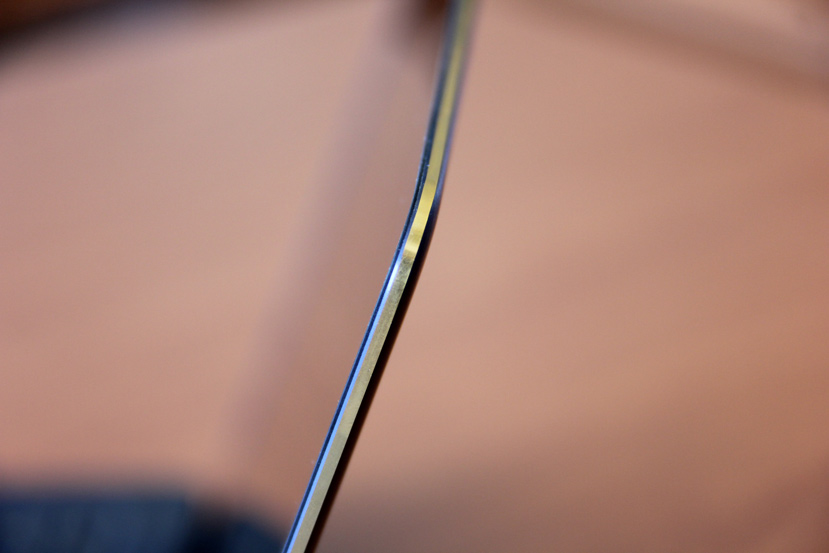 Its weights an impressive 1.1 kg that makes it a very light device (though heavier than its predecessor) while its thickness increased slightly from the previous model’s measures, with 21 mm in its thickest part and 12.9 mm in its thinnest part. Despite this, we have gotten improvements in terms of connectivity thanks to its three USB-C ports, two of them being 3.1 ports with Thunderbolt 3.0 while the third one is a 3.0 port. 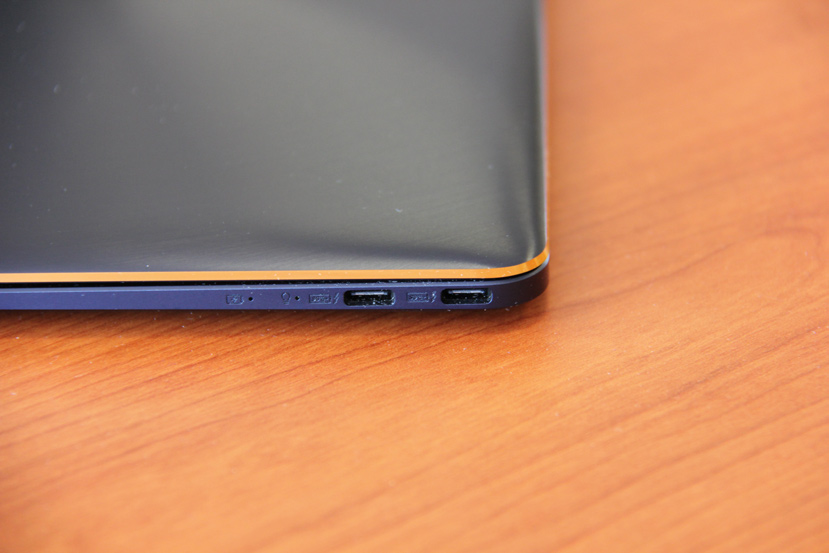 These ports can also be used for charging the laptop, meaning that we can get rid of proprietary connectors. Actually, the USB-C ports are the laptop’s only kind of physical connectivity along with a 3.5 mm headphone jack, but luckily ASUS includes two free adapters: one with an HDMI port for external displays and one with a USB Type-A port. All of this comes with a sleeve for carrying and protecting the laptop. 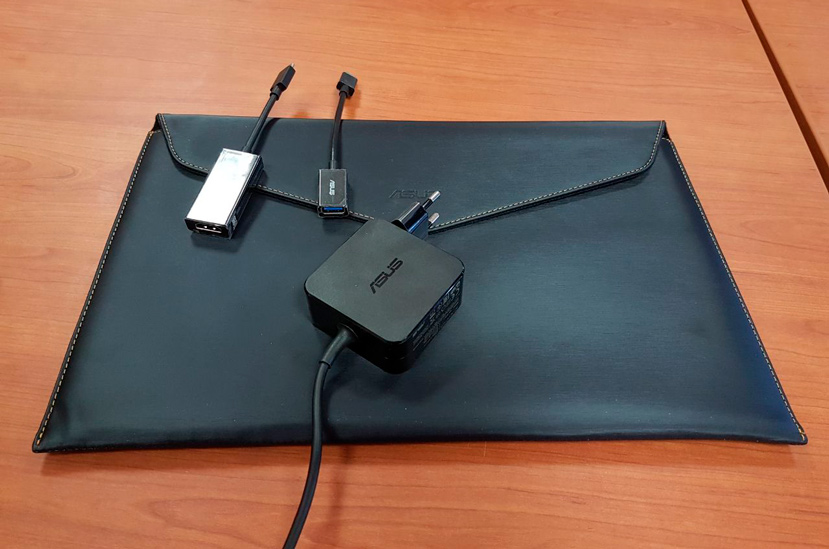 This thin design has a cooling system sporting a incredibly thin fan with a 0.3 mm liquid-crystal-polymer fan impeller and a 3 mm heat pipe.

As we can see, everything inside the Zenbook 3 Deluxe UX490UA is miniaturized except for the battery, which occupies most of the laptop’s interior, leaving a small part for the motherboard where the CPU and the M.2 NVMe SSD are. 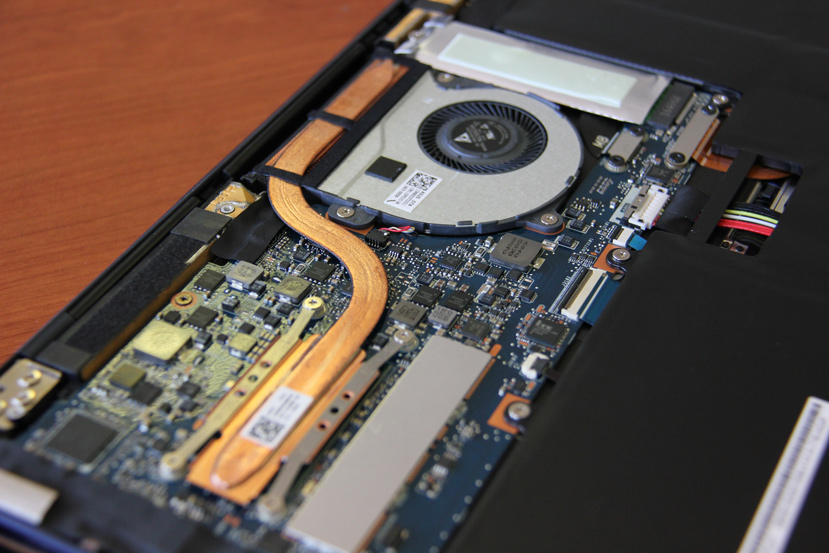 However, a downside in terms of upgrade options is that the RAM is soldered to the motherboard, so changing it is not possible. This is the price to pay for such an incredible thickness, so we have to bear this in mind when choosing between the 8 GB and 16 GB RAM models.

Opening the ZenBook 3 Deluxe is really simple since we only have to unscrew the back cover and take it off. The common components that we can replace are the battery, the M.2 SSD and the WiFi/Bluetooth chip. 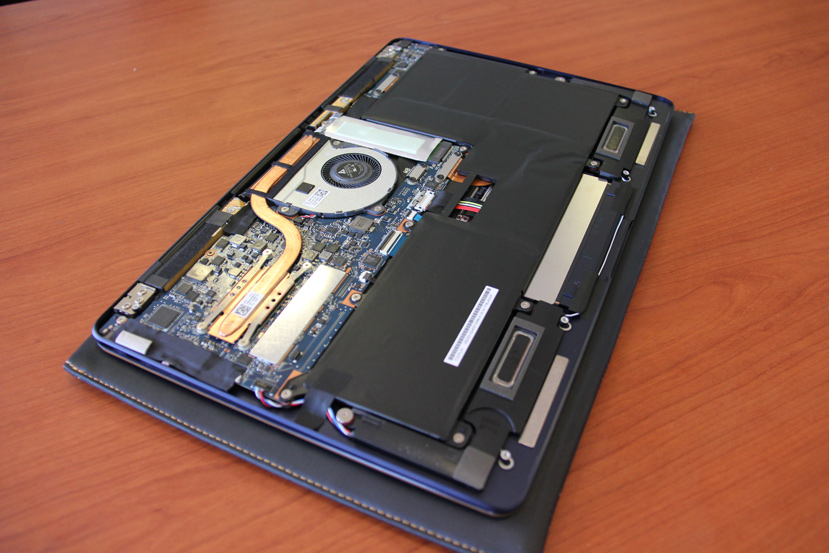 As we already said, the display is one of the features where the Zenbook 3 Deluxe outshines its predecessor. It managed to go from 12.5 inches to 14 inches without increasing the laptop’s size thanks to its thinner bezels.

It has an non-touch IPS panel with a 1,920 x 1,080 pixels resolution and a 60 Hz refresh rate, now protected by a Gorilla Glass 5 surface in order to avoid scratches. 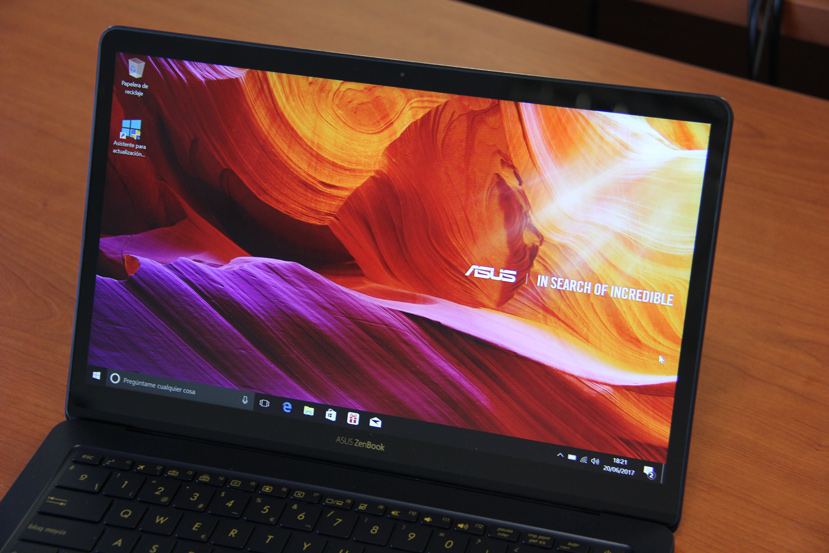 A downside of the display is that, although the company states that it has an anti-glare surface, it is very reflective since it is not a matte display, which is not a issue indoors, but it would be a bother while using the laptop outdoors and in bright places. 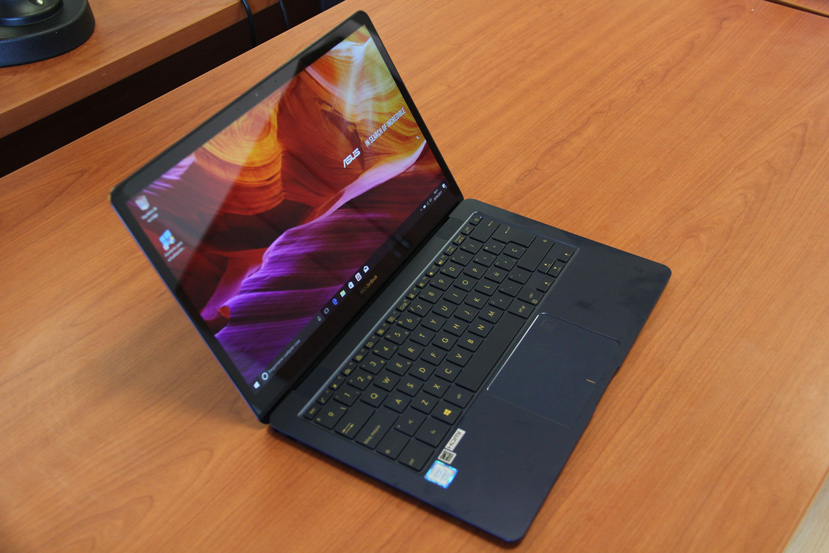 As for the specifications, ASUS states that the UX490UA’s display has a 1000:1 contrast ratio and covers 100% of the sRGB color gamut, so let’s see what values our tests get.

Contrast values are on par with the ones that ASUS promises: a real 1010:1 contrast ratio measure while the display’s maximum brightness stands around 315 cd/m².

Although the display has a good sRGB color gamut coverage, it does not achieve 100%. Moreover, it has problems with the red, green and blue color spaces while overly covering the yellow and magenta color spaces. (Read More: Best Laptop for photo editing) 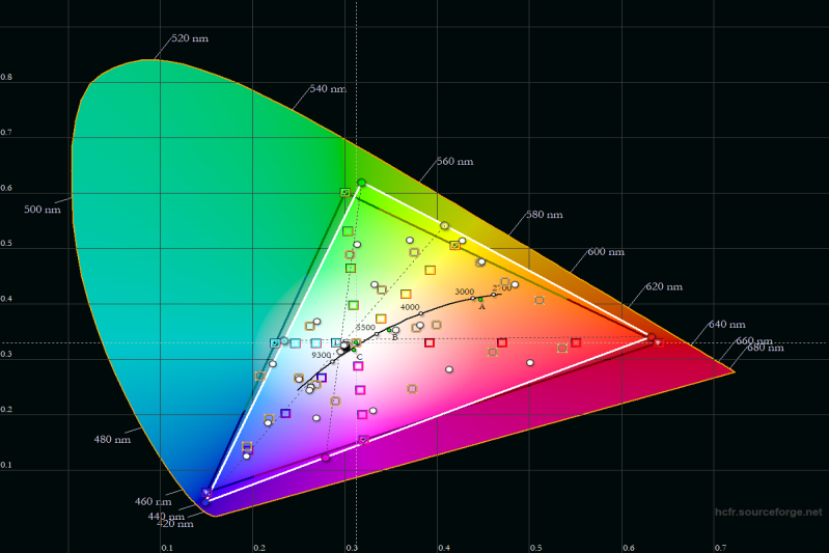 In terms of color reproduction, we have a graph where we can see the difference between the colors shown by the display and the real ones. These results are really good when reproducing whites, but the other colors’ reproduction fall short from the one provided by models such as Gigabyte’s Aero 15 with its calibrated display. 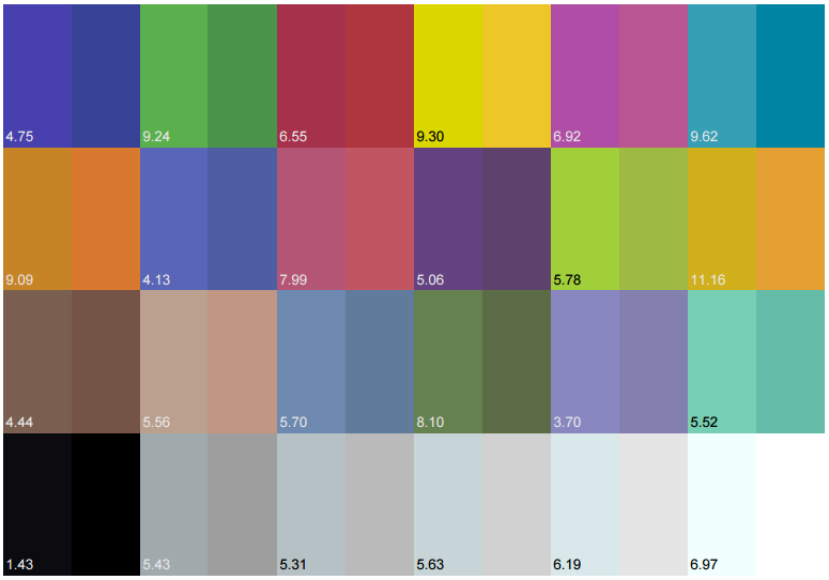 We can also see how the RGB’s green color space generally stays close to the optimum value while the blue color space stands around 110% and 105%, and the red color space stands around 90% when reproducing the grayscale. These are great results that can be improved by calibrating the display manually only if we are looking for a more realistic color reproduction, as some people prefer cooler tones such as the ones being provided by this display. 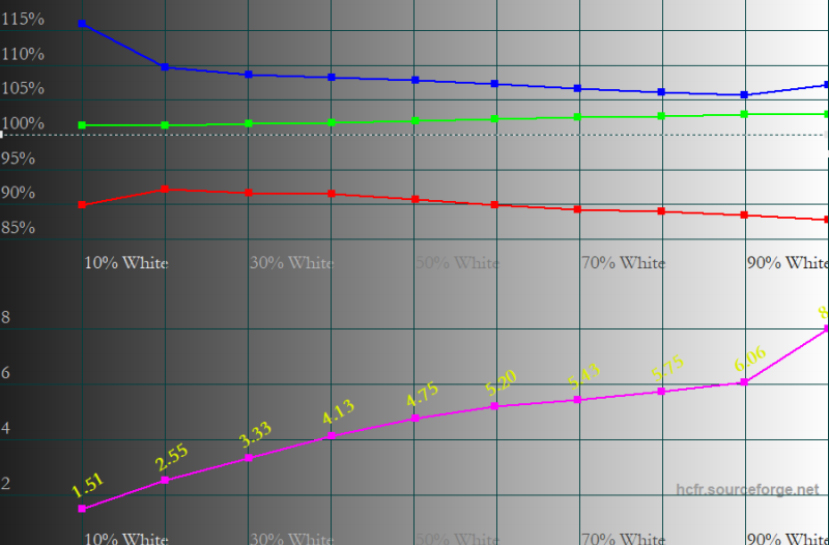 We can notice this clearly if we take a look at the 7200K value of the display’s white balance, which is a cooler tone than the 6500K value that represents true white.

Battery life is one of the main features that are usually looked for in this type of ultraportable devices. In fact, the Zenbook 3 Deluxe UX490UA gets a great score of 4 hours and 2 minutes with PCMark8’s looped benchmark, meaning that the laptop has more than 4 hours of battery life under load like multimedia tasks, games, photo editing, word processing, web browsing and video calls, among others. It actually has a longer battery life than its predecessor. 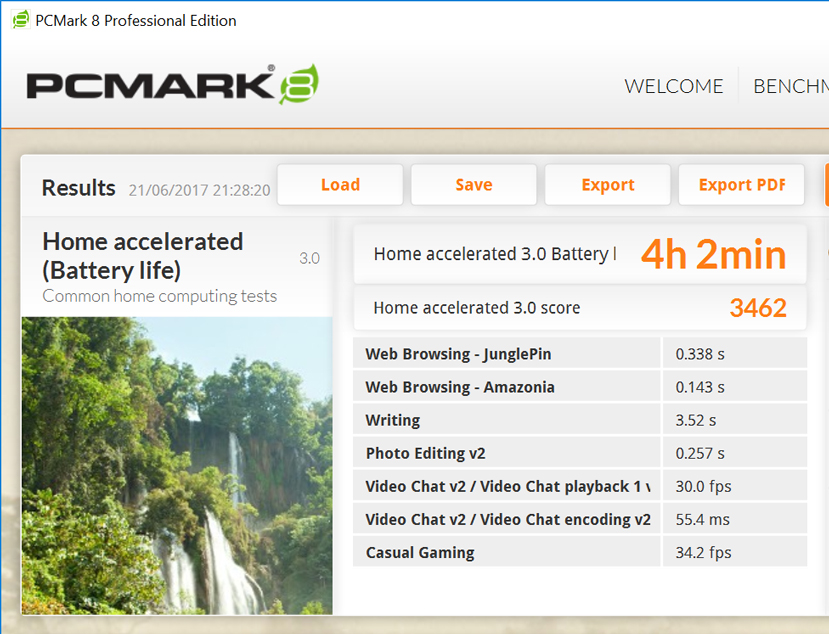 The laptop can be easily used for up to 8 hours under normal usage, which is not so bad if we take into account that it has an ‘official’ 9-hours battery life and that results are always exaggerated.

Besides, the Zenbook 3 Deluxe supports fast charging, going from 0 to 60% in just 49 minutes, giving us more than 4 hours of autonomy in little time. 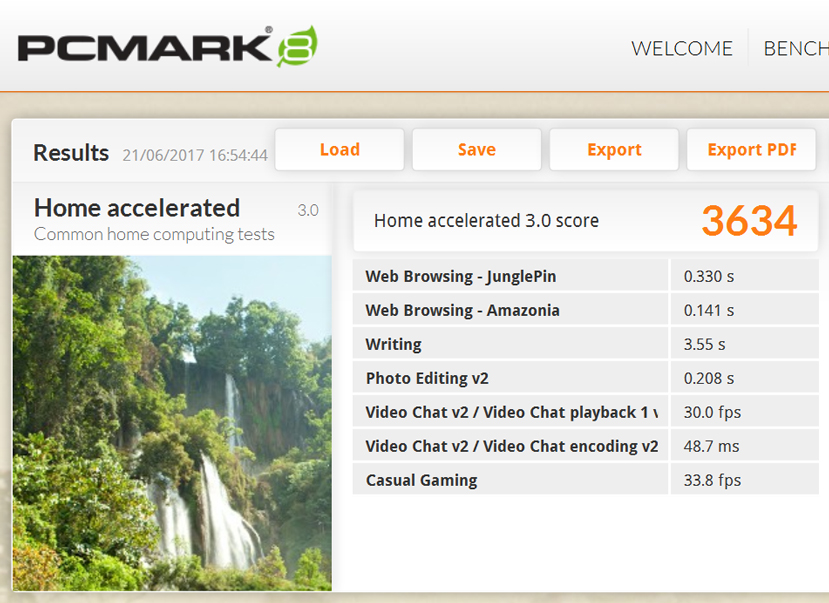 Unlike their portability or their battery life, raw performance is not one of these kind of laptops’ strongest suits: it lacks a dedicated graphics card and the processor is a low voltage one featuring only 2 cores and 4 threads. However, the laptop’s Core i7-7500U is more than enough for office tasks, even allowing us to use some programs like photo and video editors.

Naturally, we are not going to start playing the latest games on the market at maximum qualities nor rendering 3D models, but it definitely is a device capable of creating and using content, which is validated by its PCMark score of 3634 points.

The Core i7-7500U is an Intel low-power U-series processor, so it does not require a great cooling system on average devices. However, for such a thin laptop ASUS had to develop an ultra-thin fan along with a heat pipe on a 3 mm-thick system. Moreover, the fan’s RPM are low in order to keep noises down.

Even so, the laptop manages to keep the processor cool with no problem. Something that might make the user uncomfortable is the external temperature, but the laptop keeps temperatures pretty low when idle, reaching a maximum of 29.9ºC on the keyboard’s upper right corner and 28.9ºC on the touchpad. 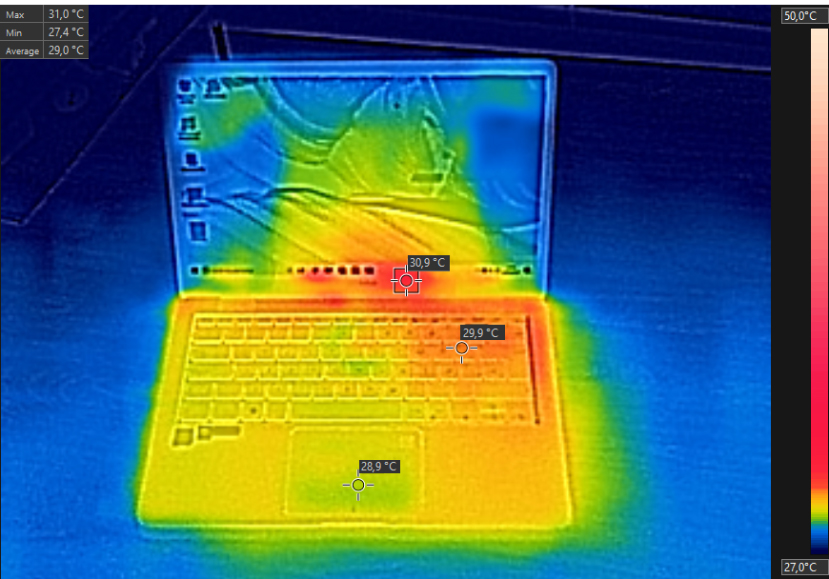 When the laptop is under load (running the PCMark8’s benchmark in this case), we see how the temperature rises about 10 degrees, which will not have an impact on the user experience while using most of the keyboard’s surface or the trackpad at around 32.4ºC. 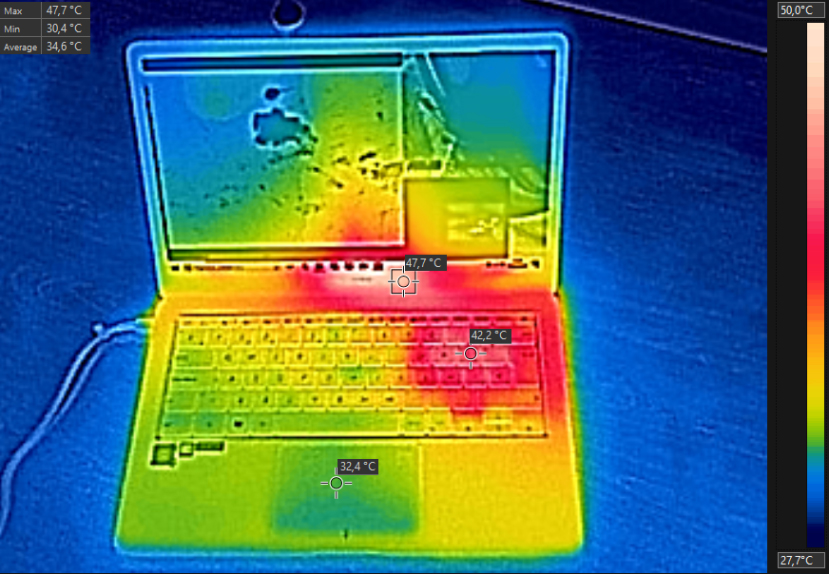 However, we will notice how the temperature rises to over 42ºC on the zone where the P, L, ; and enter keys are, which is also where the processor is located. The heat is slightly noticeable in that zone, but our hands are usually resting on the touchpad, which will remain a much cooler zone.

ASUS already had one of the best ultrabooks on the market with its Zenbook 3 UX390UA, and the brand managed to improve it with this new version.

The ASUS Zenbook 3 Deluxe UX490UA does not represent a huge change from its predecessor, but thanks to the laptop market evolution it does fill the void left by some of the features that were not present in the previous model at the time.

An example of this is its two USB-C ports with Thunderbolt 3, showing its full support for this type of connectors and interface useful for charging and even transferring data and video output. 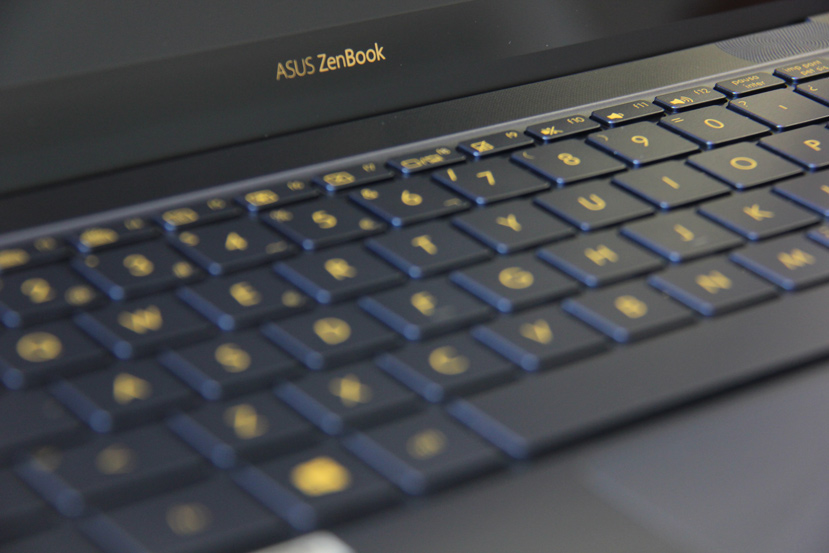 Another major improvement is the display’s reduced bezels, allowing the brand to fit a bigger 14-inch display into such a slim body, which is something to be grateful for when using the laptop for work. Actually, thanks to this trend a lot of people unsure of whether or not changing their 15.6-inch laptop for a 12 or 13-inch model will be seriously thinking about doing it.

The bloatware that ASUS integrated in this device is a detail that we did not like. Although it is true that it will allow us to install any ‘recommended’ programs shown in a huge list of ‘sponsored’ software through an assistant called ASUS GiftBox, it will annoy us periodically and insistently even if we close it and tell it not to show itself again.

Along with this software, a totally dispensable trial version of McAfee Livesafe is also included.

Another little, though common, issue in this type of metallic devices is that we can notice the electricity flowing on their surfaces by running a finger on them if we use the devices while they are charging.

There are no surprises in terms of the CPU’s processing power since it remains the same as its predecessor. Its NVMe SSD and its 16 GB of RAM, even if it is a DDR3 instead of a DDR4, do stand out. Additionally, we have a four-speakers system that gives us an above-average quality sound, even if it cannot be compared to the one featured in bigger laptops. All of this is built into a design that has already been proven to be successful in terms of aesthetics, cooling and portability. 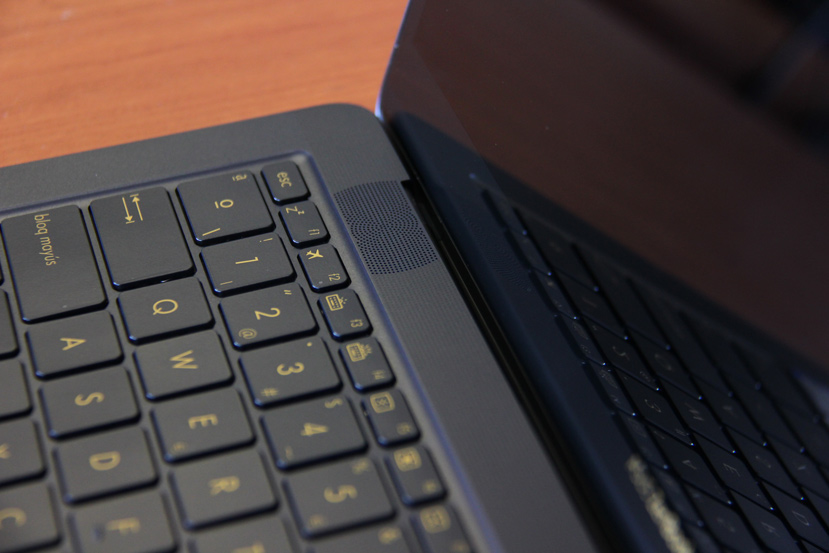 With the Zenbook 3 Deluxe UX490UA, ASUS has updated its best ultrabook to allow it to remain on top of the game as one of the best devices both in its category and on the market, with a lower price than direct competitors like Apple’s Mackbook.