BenQ ZOWIE XL2735 Review – The Gaming Monitor With the Ears

BenQ should be a household term for most of you, seeing how they are one of the early companies that entered the display and beamer market. With its ZOWIE line BenQ is now presenting its new lineup target specifically towards gamers which we’ll discuss in more detail in the following article. Our review model is the flagship ZOWIE XL2735 display which, so BenQ, was specifically developed with E-Sports in mind. 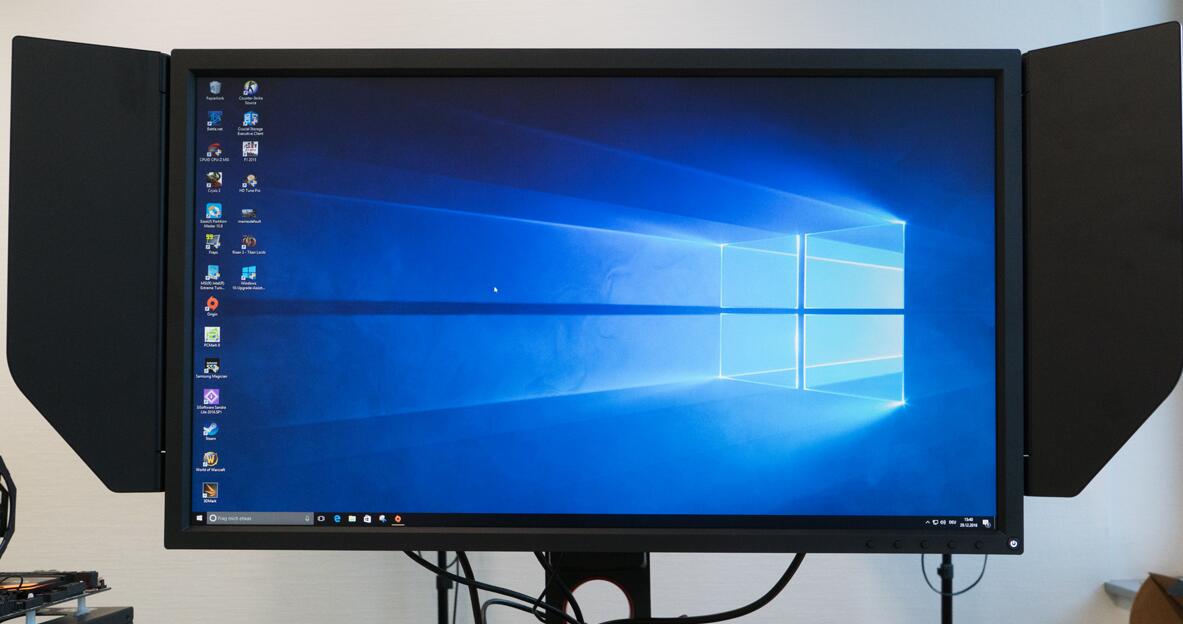 The features sure make an impression right away. 144 Hz “Dynamic Accuracy Technology”, S-Switch, Black eQualizer, Low Blue Light, USB-hub as well as height and angle adjustability. Also included are so called focus-blinds which can be folded out so you can focus on your games better. This makes the XL2735 kind of look like it has ears.

Here are the specs again, this time more compact: 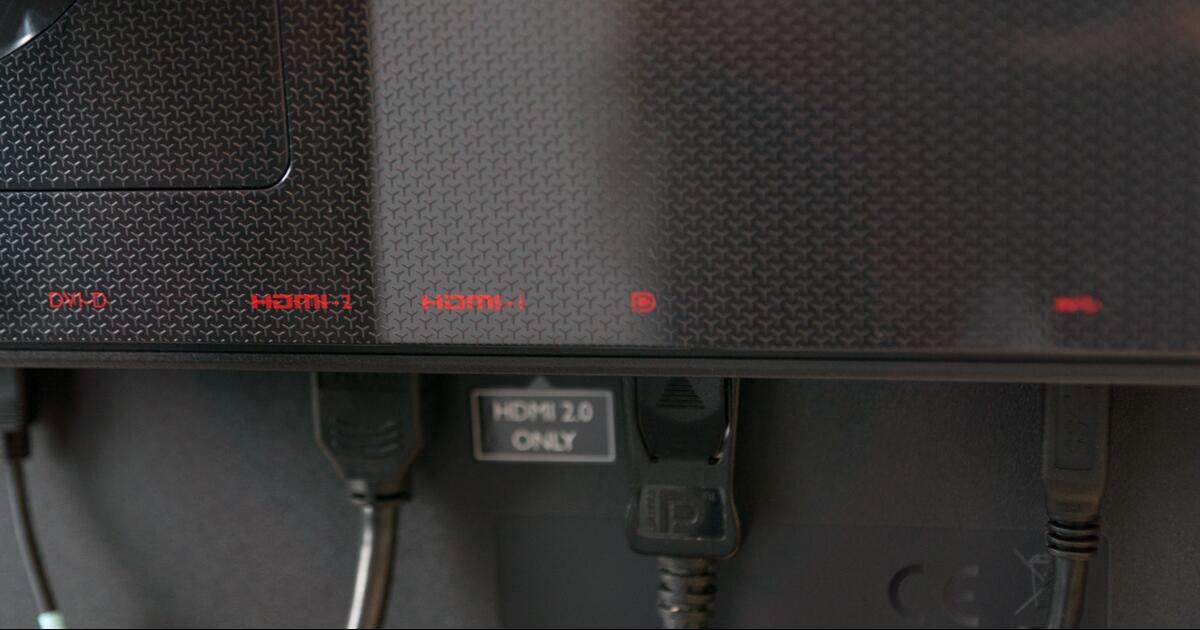 Included are quite a few accessories: The focus-blinds as well as USB 3.0, DisplayPort, and HDMI 2.0 cables are included right in the box alongside the instruction manual and driver CD, and of course the display itself. 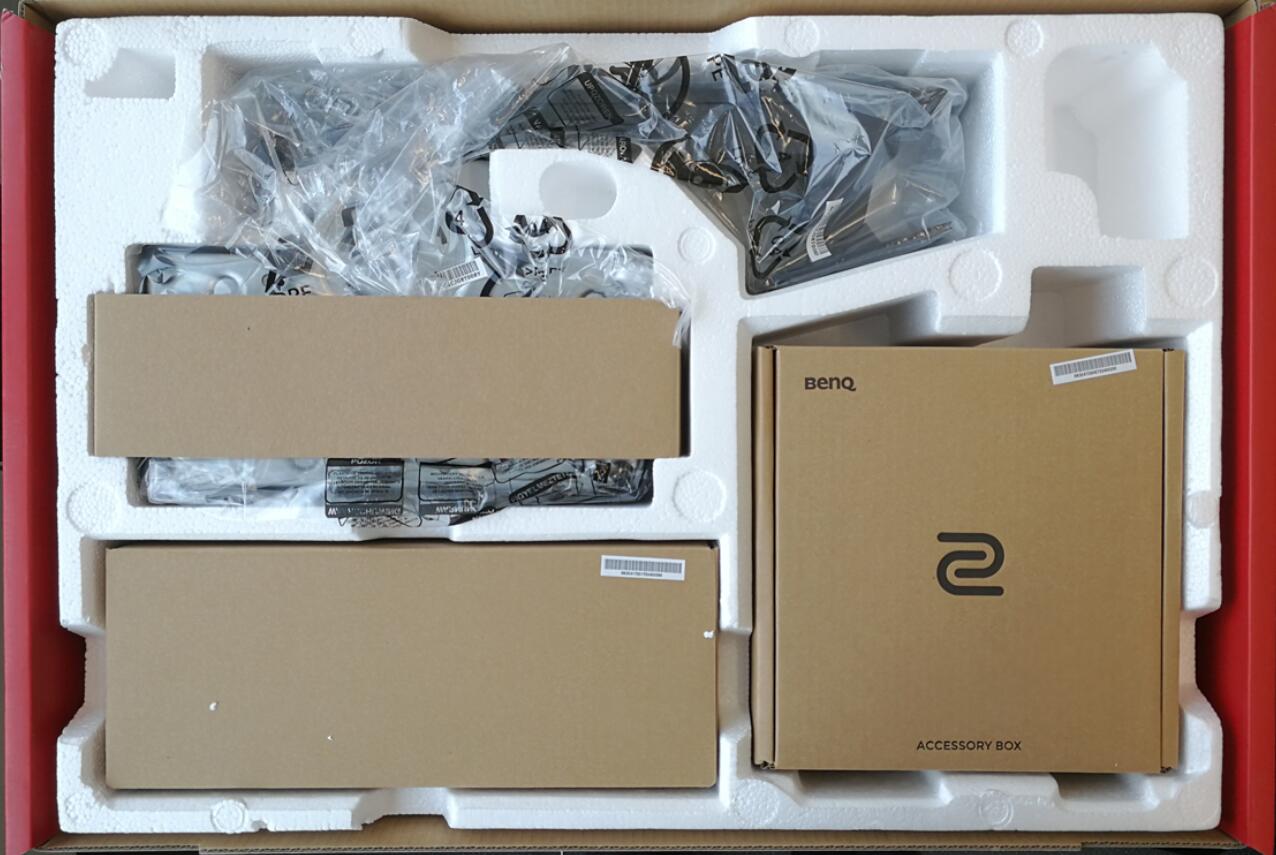 To break it down: Very simple. Unlike other displays, the ZOWIE doesn’t have to be lifted out of the box from the top. You can simply place the box flat on the floor and open the side. The base assembles without any tools with one wing nut that easily can be fastened by hand. One that is done you can simply slide on the display from the top and it will mount to the base with a noticeable “click”. Setup and deconstruction don’t require any tools whatsoever. To take it off the base simply press the button and the display can be lifted right off. Setup can thus easily be accomplished by one person. The only point where you’ll need a tool is when you attach the focus-blinds. These require a screwdriver to be fastened. 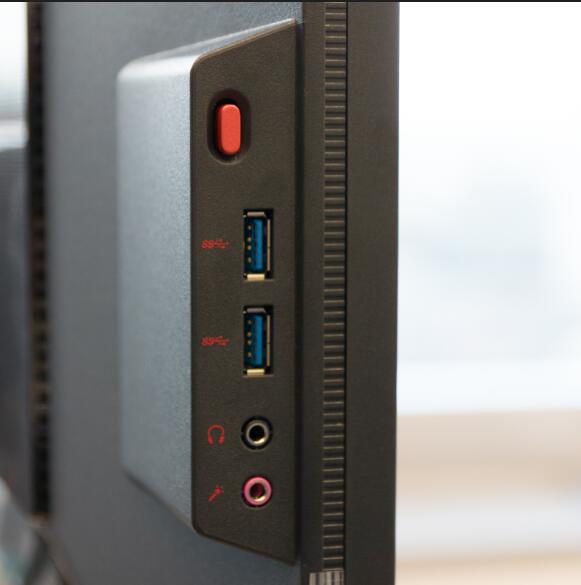 Setting it up on your computer is of course no big deal at all. Simply plug in and play.

The body of the display is made from plastic with the back partially finished in a carbon fiber design. The plastic feels high quality and there’s no audible squeaking or other mechanical noises when you press on it. The build quality seems very solid and even the buttons have a pleasant click without being too hard to press.

Height and angle can be adjusted with one hand and can even be pivoted when you move it all the way up. There it can be rotated up to 90°each way. For each direction there is a scale which allows you to mark your favorite settings. That way setting back up after coming back from a LAN-party is quick and easy. 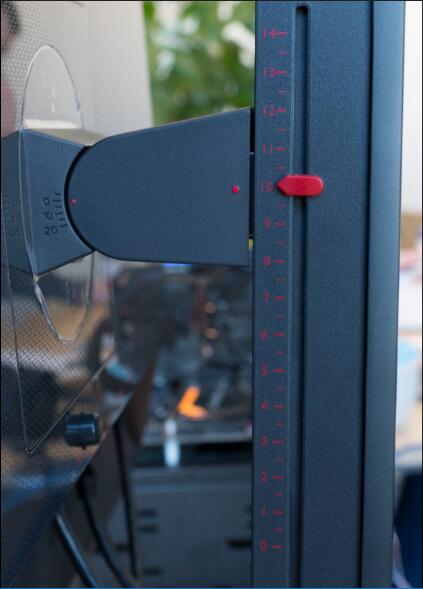 The ports on the side aren’t visible from the front so making out their position may involve some guessing. After a while you’ll find them right away. Above the ports you will find an extendable headset-holder. A very nice gimmick.

Especially in gaming monitors a good menu system is key in order to adjust the settings and recall presets quickly and as easy as possible. The included S-Switch makes setup very easy. Instead of having to reach the controls on the monitor you can just pull the S-Switch towards you and control it via scroll-wheel and the back-button. This needs some practice however, so that you don’t accidentally scroll while clicking. 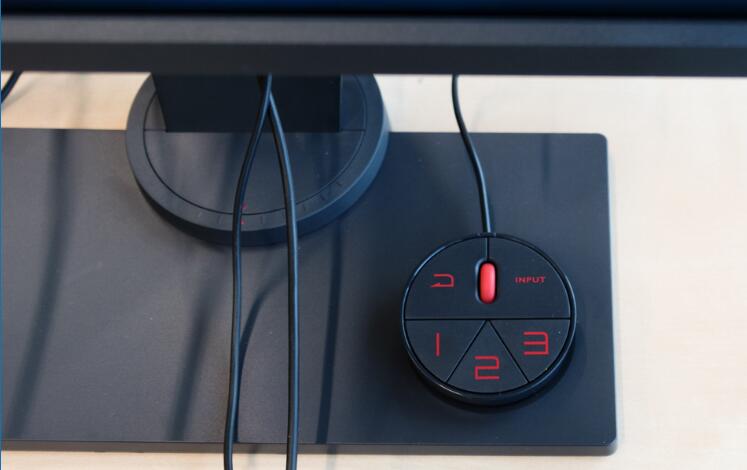 Besides the two pre-configured FPS presets there is room for three user profiles that you can set up yourself. For downtime between gaming sessions there is also a Movie preset.

With the quick menu you can quickly chance preset and adjust color vibrancy and the Black eQualizer. The full menu grants you access to all the individual parameters like brightness, contrast, sharpness, and more. 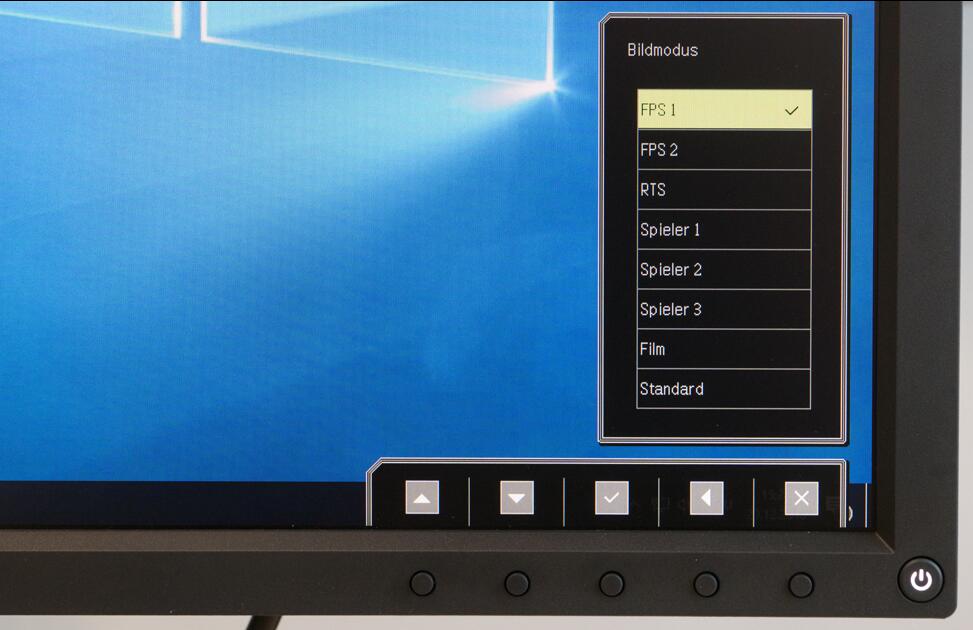 The menu itself doesn’t differ a lot from other manufacturers but it is nice that you are shown the individual parameters that are adjustable upon highlighting any category. Navigation with the S-Switch is also a lot more straightforward than most other screens allow for. 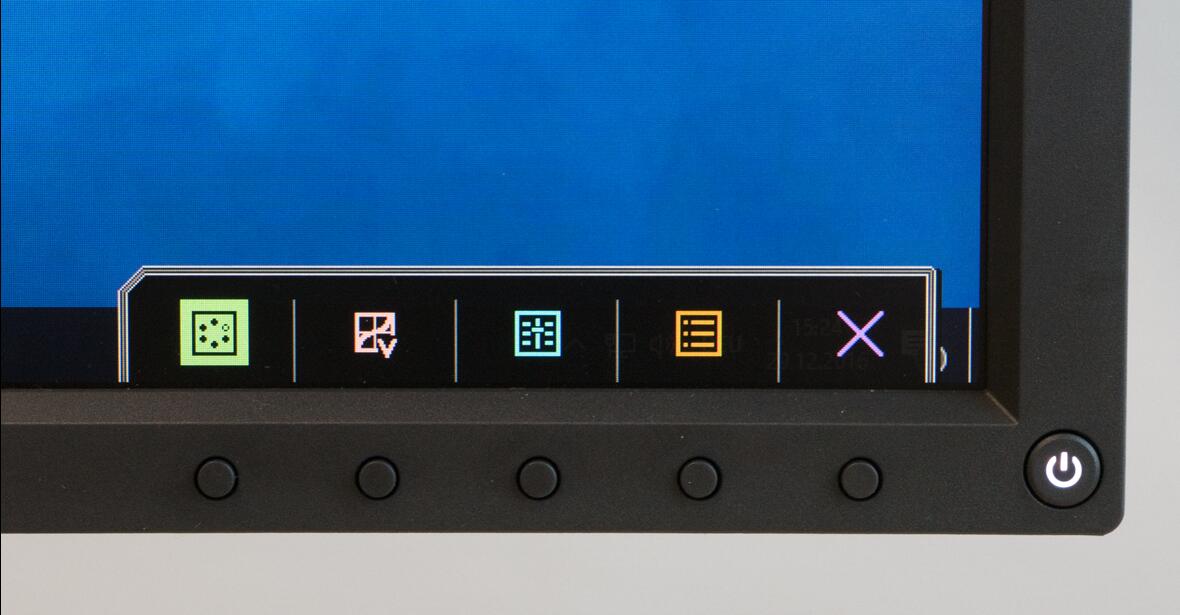 Now onto the most important part of the display: The panel. The colors are strong and it exhibits good contrast. However, you should spend some time calibrating the display for your needs because on factory settings the image looks rather flat with washed out colors and low contrast. For gaming that’s good but for any other type of content it looks rather dull. The WQHD resolution (2560 x 1440) looks great and fits the 27” of screen real estate very well. Sadly, the TN panel means that the viewing angles aren’t perfect. At an angle of 130° you will notice that there is some notable change in brightness. Luckily however, there is noticeable color distortion happening and more exotic viewing angles. The panel is matte and the corners have been rounded so that there are no reflections of the screen on the bezels when looking at it from different angles.

Brightness wise, the ZOWIE XL2735 performs well with the onscreen content illuminated bright and uniformly. Only when looking at darker scenes you’ll be able to see some clouding near the left and right edges of the screen with the brightness on maximum. This disappears however, when running it on anything less than full brightness and when dealing with more average content.

Its blue light filter (called Low Blue Light) is meant to make long gaming sessions cause less eye-fatigue. That is something that can’t really be controlled when sitting in front of a screen for the entire day, though.

The gamers among you might disagree but I personally do not see a difference between 60 and 144 Hz. In both cases the image is sharp and even fast movement onscreen is clear and not blurry at all. On its “FPS 1” setting the image might seem a tad flat but that makes it easier to spot your enemies – especially in dark corners. This is probably also thanks to the Black eQualizer which adjusts the contrast dynamically.

A feature that BenQ advertises as a selling point are the focus-blinds. These are meant to better focus your attention on what’s happening on the screen and let less distractions come between you and your gaming experience. So far, this works as promised. These blinds block out what happens behind the screen. However, won’t we be setting up the screen in front of a wall anyway? In that case there are of course no distractions there whatsoever.

Where we can see them come in handy is at LAN-Parties where you can block out some of the distractions.

Despite the more average factory setup the BenQ ZOWIE XL2735 can score with good image quality. 144 Hz and 1ms of response time are guaranteeing a clear picture even when very fast movement is happening. The factory presets make your enemies easy to spot in game. The build quality as well as the menu system is top-notch and BenQ shows no beginner’s flaws here whatsoever.

The only drawbacks are the TN panel with its comparatively narrow viewing angles and the factory calibration which makes the screen pretty much average for anything but gaming. The ports on the side are also rather hard to find especially with the focus-blinds attached.

All in all, the ZOWIE is a solid performer that will most certainly please gamers. Those who are looking for color accuracy however, could be disappointed.

Read More:
Best Gaming Laptop
Are Dual Monitors Worth it?