In this guide we will walk you through different options and configurations suitable for all budgets so that you can get your hands on the computer of your dreams; Retro Gaming, Home PC, Pro Player performance and even the coveted 400 dollars Low Cost PC. 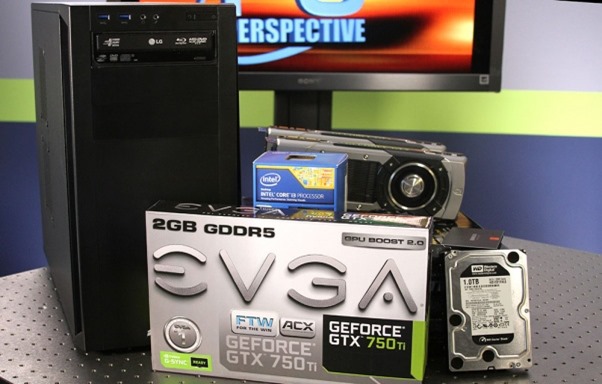 The nextgen consoles have been on the market for a year now and they have given us joy and also disappointments. Some of this disappointments have occurred, possibly, due to the high expectations many users had deposited on Sony and Microsoft’s PCs, hoping they would stand up to Gaming PC in terms of power. The resolution gate, the failed attempts to reach the 1080p at 60 fps have been just the tip of the iceberg in exempted arguments by the players of the compatible. And it’s that the PC door hides a lot of advantages, each time more attractive, but not always within reach of everybody’s budgets. The initial investment is higher than buying a home console. This is why we bring you this guide, which tries to show you the different options and profiles with the most competitive prices to this moment. For all of those who want more than just a console, better graphics, better frame rate, bug solutions, mods community, offers and games you don’t have to pay 74.95 dollars for. In short, for all of those readers, users and bloggers that want to become part of the every time bigger PC Master Race.

But some considerations first. In this budgets, installation is not included – We will be buying the separate pieces. Most of the stores offer the putting-together service for a 40-50 dollars charge, with a good finish and the assurance that all the components will be compatibles. But we encourage you to try to do it yourself, as it is easier than what it seems. Just like when we buy a console it does not come with a TV, we didn’t include a TV either in our budgets. This PC’s are meant for gaming and can be used as if they were consoles, connect our favorite pad, plug in the TV via HDMI and enjoy. We also didn’t include the Operative System. You can use the license of your current PC with your new one. You can also try the free Steam OS Beta, use a Linux Distro or search online for a Windows license which you can find for around 20 dollars. Keep in mind that the disbursement is greater than a console, although, In long term it becomes profitable due to the low price of the games. It is also necessary to have minimum computer skills, because even though it is not usual, a degree can help you out with a configuration or compatibility issue.

This are the PCs, components and budgets we recommend:

We’re putting a 400 dollars base PC. Why this price you say? Well, that’s because that is the RRP (Recommended Retail Price) for a Next Gen console. And we will ensure that the PC performs at least as good as a NextGen. And even though we have surpassed our budget by a few dollars, it is worth it because this computer lets us play with a superior quality than a PS4 when playing multiplayer, or at least with a better frame rate.

The above was just an example that for a little more than what a next gen console costs you can get the same or a better performance, but a bit unbalanced and that you will have to update sooner or later. This is the solution that we would recommend if you want to have a low cost, very well balanced and durable PC. In terms of gaming power, it is very similar to the previous one, although it has more RAM, it’s quieter and the graphics are the best. This PC is behaving way better than the PS4 in pretty much all the multi-player games, for example, it runs Assassin’s Creed in 1080p, with high details between 26 and 40 fps, while the PS4 In a medium settings in 900p runs between 20 and 30 fps.

We have the same processor as before, which returns great results and is an option with future thanks to its 6 cores. With its 8GB RAM it guarantees us that it is not going to fall short in a near future. 1TB at 7200rpms HDD, front USB3.0, card reader and a 750ti, a low power consumption graphics card with 2GB dedicated RAM to put textures in ultra and a superior performance than a PS4 in 95% of the games.

Now, this is a real Gaming PC as it should be. If you want to have a PC that sweeps the floor with the next Gen, you will have to write this down on your budget. The price of this is higher, but then, when purchasing the just released games for €20 apiece, or with discounted prices for just a few cents, it comes cheaper on the long run. We will leave you with 3 configurations, one with an 8 core 3.5 GHZ AMD processor, and 2 other ones with Intel. One of them is bold sporting a 2 core processor, and the other one a 4 core processor

This is the first case that we have with an AMD configuration. The pros are having 8 cores, the cons are having 8 cores. Obviously having more cores is better, but it’s happening now that the games that make use of all the cores are very few. And in fact, most games just use 4 cores, if not 2. Each AMD core is less powerful than an Intel one, so the leverage of this PC is that you will have more cores to use. We are not implying that games that use 4 or 2 cores are going to run poorly, but that it’s not going to be as good as with Intel. On the other hand, it has a good CPU cooler, allowing us to overclock and improve the CPU’s speed, thus improving its performance. The graphics card has 3GB vram, allowing to put textures in ultra. It is undoubtedly the strength of this PC.

In this second case, we have an Intel i3, with 2 physical and 2 virtual cores, which is not the same as 4 physical cores, but it is close enough. In addition to a very high base frequency, that goes up to 4 GHz with turbo – a PC to keep in mind. Thanks to its CPU cooler we will have good temperatures and very low noise. Everything else is exactly the same as the previous case, but with a faster processor in some games and slower in others. The choice between this two PCs is little flipping a coin, although there might be something that will shift the balance; this second option allows us to run heavy emulators like Wii or PS2 do.

In this third case we propose something more balanced. A 4 core processor running at 3.4 ghz plus turbo. A bit less than its little brother, but that will make good use of the 4 cores when gaming. However, we have a bit less powerful NVIDIA graphics card that we cannot activated during some games with AMD graphics since they are exclusive to the green brand, such as the TXAA which completely eliminates the annoying saw tooth, the HBAO+ that gives realism or the PCSS that creates more realistic shadows. Examples of this are the just release games from Ubisoft, Assassin’s Creed Unity or Farcry 4.

This is the big leagues now, and the limit of our proposals in this guide. Paying more money will not give us more performance, unless we use SLI or Crossfire solutions. We have 4 physical cores and 4 virtual. In the same case that we have commented before, the games that use 2 or 4 cores will not run any better on an i5, but if it uses 6 to 8 cores then it’s something else. The motherboard and the heat sink allows us to squeeze the processors circuits when overclocking, so that we can increase it up to 4.7 GHZ without any issues, improving its performance in a 25%. With it, we also used a GTX970, the current queen power/price wise, with 4 GB of vram and a power superior to that of a NVIDIA Titan.

Now we will recommend some PCs for more specific purposes. Do you need a small device to place next to the TV and that performs very well? Something that runs silently? Something cheap for emulating? This are some of the proposal:

A small device, meant to play from emulators up to Dreamcast smoothly, and of course, to use as HTPC. It includes wifi and Bluetooth. In a box not bigger than a console, it hides a silent pc with a minuscule power consumption, but that on the other hand won’t have problems running games prior to 2010 at 1080p. Also, it sports a 1TB HDD.

With this PC you will be able to emulate Wii and PS2 at 1080p and their original frame rate, along with a brutal esthetic and also you will be able to play any game with the quality of a PS4. An i3 at 3.6GHZ processor and 4.0GHZ with turbo, low power consumption, little noise and 1TB HDD. What else could you ask for?

Who said you cannot have it all? Power in a reduced size, silence and striking looks. It is important to note that the graphics card it uses is a GTX760, and all this within a small box. Install STEAM in big picture mode and you’ll have a Steam Machine.

A very nice PC that decorates any room, and most importantly, it is so extremely silent that you’ll barely hear it when it’s on. As for games, it is slightly above the PS4 and brings a Blue ray reader incorporated so you can watch your favorite movies. Certainly, the aesthetics and the silence are the strength of this PC. Although it is not advisable if you’re looking for maximum performance per dollars spent because in this world, silence is money, but a lot of times it is worth the investment.

What would be the PC that you would mount?

Now that you’ve got what it takes to start enjoying this new world, grab your tower, make space for it in the living room, plug it in to your TV via HDMI or A/V receiver, plug in your favorite pad and start this new adventure. And once you’re all set with this, let of know what your ideal configuration is. Do you have any proposals for what a good, nice and cheap PC should be like let us at ZonaForo know and we will include the three best ones in this section, dedicated to the community and we will give you presence on the social networks, where you can also comment which brands you trust, which stores have given you the best service or what plans you’ve got for your devices of the graphic cards heavy weight like The Witcher 3, Battlefield Hardline o Batman: Arkham Knight.