Today we finish with the third installment of our special item reviews in which we chose the best cpu for gaming within different price ranges.

We have talked earlier about the best processors to play games if you have a budget of up to 100 dollars, which would be the basic range, and the midrange, with a budget of no more than 200 dollars.

In this new special article we raise the bar to 300 dollars, a figure that I consider as “the end of the road” as going beyond that means entering a huge gap between quality/price.

By this we mean something very simple, as the difference between a 250 dollars processor and one that costs 400 dollars, for example, is almost nonexistent when playing a game, and this means that for every dollars invested beyond a particular limit you don’t necessarily receive a performance boost that is really worth it.

This makes it easier to understand why it is not advisable to buy Core i7 processors if the use you will give to the PC will be mainly for games, except in the case of laptops, since in this area the Core i5 is not quad-core, whereas Core i7 is quad-core, provided they are not low-energy consumption models.

With these simple but necessary remarks, which no doubt will be very useful to you, let’s review the best processors within this price range that can qualify as high-end.

Within this range, AMD has nothing that can really compete with Intel, as we are waiting to see if the red giant surprises us with Zen, its next generation of CPUs that would give the jump to 16nm and use a new architecture.

That said, it is clear that if you have between 200 and 300 dollars to buy a new CPU it is best to opt for Intel, since you get high quality quad-core processors at fairly high frequencies that also have the unlocked multiplier and a huge IPC.

It is important to remember also that its operation is much cooler and has a lower TDP, which represents important advantages when dissipating heat and gives you the option of using more affordable fans.

It is important to remember also that operation is cooler and have a lower TDP, which represents important advantages when dissipate heat of our team and gives us the option to use more affordable fans.

As we said, AMD does not have any processor in this price range that is really worth it, since the FX 8350 is a lot smarter option than FX 9370 and above.

The reason is clear, as both have the same IPC, unlocked multiplier and an almost identical overall performance, but the second has much higher TDP and higher consumption.

We wanted to point out all this to clear any doubts on why we discarded AMD in this article. 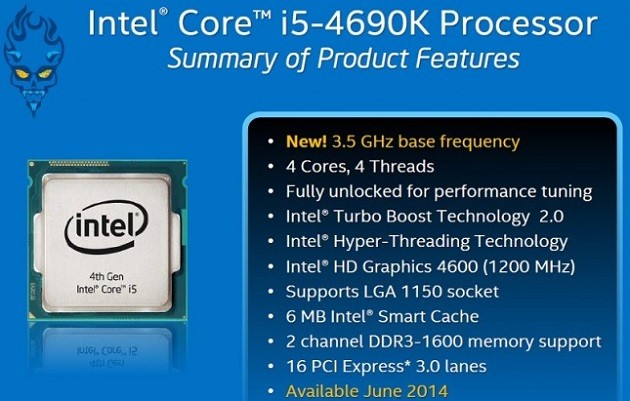 This processor is based on Haswell, the fourth generation of Intel Core processors, and features four real cores running at 3.5 GHz-3.9 GHz in normal mode and turbo, plus 6 MB of smart cache and an unlocked multiplier.

This translates into a high level of performance that can increase considerably if you overclock its working frequency, which is not very difficult, because achieving the 4.4 GHz-4.6 GHz with it is something that is no problem at all.

Its average price is around 230 dollars, a very reasonable amount if you consider the performance that is able to offer, as the difference you save instead of buying something expensive at 300 dollars can be rather invested in improving other essential aspects on a gaming PC to play, such as the graphics card.

In games that are able to use more than four threads, such as Crysis 3, Core i7 processors offer small adavntages that ultimately don’t justify the price difference that they pose, as the cheapest is around 310 dollars.

And what about those of us who can spend over more than 300 dollars in the processor?

We said that the price-performance ratio decreases greatly when entering the highest-range CPUs and therefore they are not a good choice, or at least not from a quality/price viewpoint, but the truth is that it’s fair to reference a “reasonable” option for those with large budgets.

So let’s talk about the Core i7 5820K, a processor with six cores and twelve threads at 3.3 GHz-3.6 GHz, in normal and turbo modes, 15 MB of smart cache and unlocked multiplier, whose price is about 390 dollars.

It is more balanced than other high-range models and therefore it is the only option in the top of the range that would not be completely crazy if you are going to just play games, but you must also take into account that it uses the Intel platform LGA2011-3, which increases the final cost of the machine.

With all this, there is not a substantial difference between it and the Core i5 4690K, at least in the short term, as CPU models rapidly evolve, so we don’t recommend buying these components as a long-term investment, as you will be wasting money that you could spend on other components.

Today we are virtually stagnant in that we believe that the four cores system and the high IPC of Intel CPUs are still the best option to play, a reality that will not change anytime soon.

Yes, we know that the arrival of DirectX 12 will give an important push to multithreaded processor and therefore the use of a larger number of cores, but even at that point the current difference of IPC between Intel and AMD is large, while at best an FX 8350 equals or exceeds very slightly the Core i5 4690K, using all cores.

To the above it must be added that the adoption of DirectX 12 technology will be gradual, and therefore it could be some time until APIs sets become a real standard.

With this in mind the reality is clear, you must seek the offers with better quality/price value on a short term, and in that sense the Core i5 4690K is the best choice.

As always I invite you to leave your opinions in the comments.