We faced off the representatives of Nvidia’s and AMD’s mid-range to evaluate their performance and quality/price ratio.

Usually the launch of new graphics cards make glances go towards the high-end, to those outrageous numbers, monstrous frame rates or resolutions within the reach of very few, but it is in the mid-range, where the vast majority of buyers aim for because it is where the best price/performance ratio on the market is, in that range between 200 and 300 $. That is why we are going to highlight and face off with one another representatives from both Nvidia and AMD in the range: the GTX 1060 6GB, GTX 1060 3GB, RX 480 8GB and RX 470 4GB.

On the green brand’s side, we have 2 versions of the same card, the GTX 1060 in its 6GB and 3GB models, but they are not exactly the same card as we can see below.

The hardware used was mid-range as well, an i5 2500K with a slight overclock to 3.8GHz, 16GB of RAM at 1600mhz and a supply of 520w. In tests we used the Nvidia drivers 372.54 and AMD drivers 16.7.3. There are some games where the 1060 3GB failed to pass the test with the same settings as the rest due to limitations of VRAM, in these tests the result will be zero because the game could not start.

We are using the usual Benchmarks and games since they are reliable, and favor both brands.

We also incorporated the new Deus EX: Mankind Divided, being an ideal game to test our hardware.

A fairly standard result in this test, since it uses a lot of tessellation the Nvidia cards stand out. The VRAM is not decisive in this test. Firestrike, the world’s most used graphics test so far shows a slightly better performance for the 480, with the 2 Nvidia cards lagging behind and the 470 coming last, but pretty close. On the new 3Dmark test that replaces the Firestrike we can see an almost identical result to the previous test, but with a very close outcome between the big 2.

The latest game from id Software, the brutal DOOM, shows very interesting results. In OpenGL, the original version of the title, the results are fairly common, with both Nvidia cards in the head but if we use Vulkan, AMD shows a large improvement putting the RX 480 ahead, although just by a little.

Square Enix’s MMO is quite demanding on the graphics, and it benefits Nvidia for its use of tessellation.

Before GOW4 arrives in a few weeks, Epic left us this appetizer, a game that works somewhat better in AMD. We see a very tight result, but the 1060 3GB couldn’t pass the test with the same settings as the rest since it crashed the PC for lack of VRAM. Although it’s been out for a while, Metro Last Light it is still one of the most demanding titles found on PC, and its Redux version, even more. The game favours AMD slightly, and we can see how the RX480 wins by a nose, or in more technical terms, by a frame. 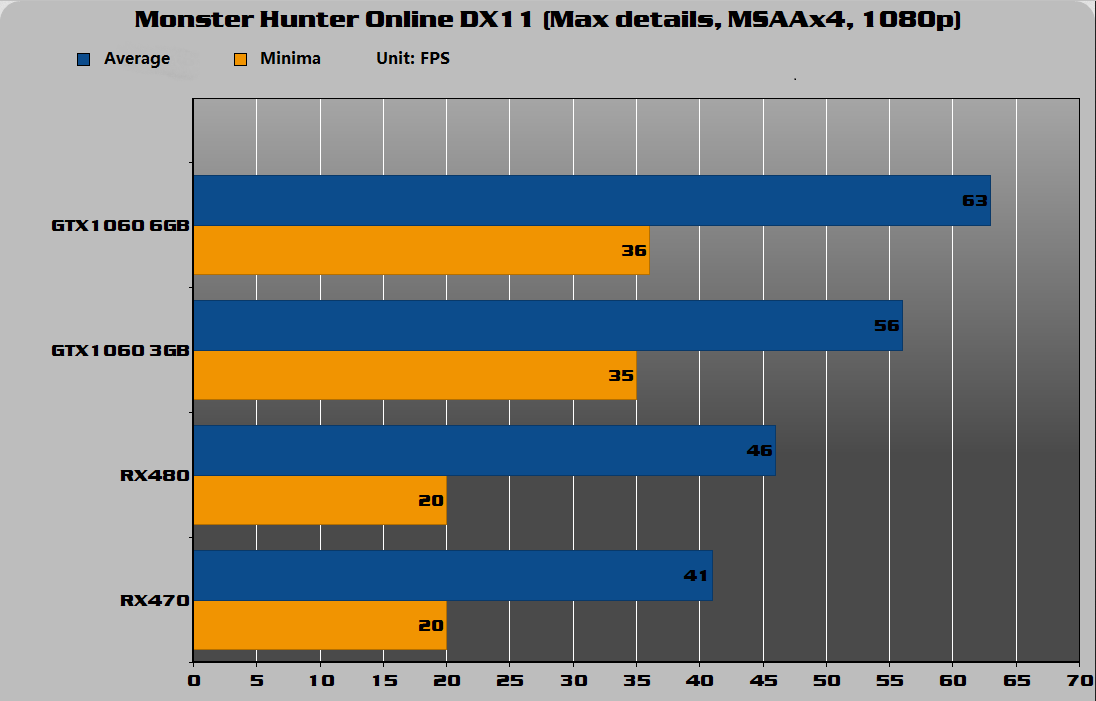 The incursion of Capcom’s saga on PCs was done with latest CryEngine and exhibits demolishing graphics, with much emphasis on DX11 effects like tessellation and hair physics. It favours Nvidia, and we see them take a great advantage.

Another game where the little 1060 failed to run the settings of the test, which includes the HD texture pack and ambient occlusion on ultra. The results are very evenly matched. 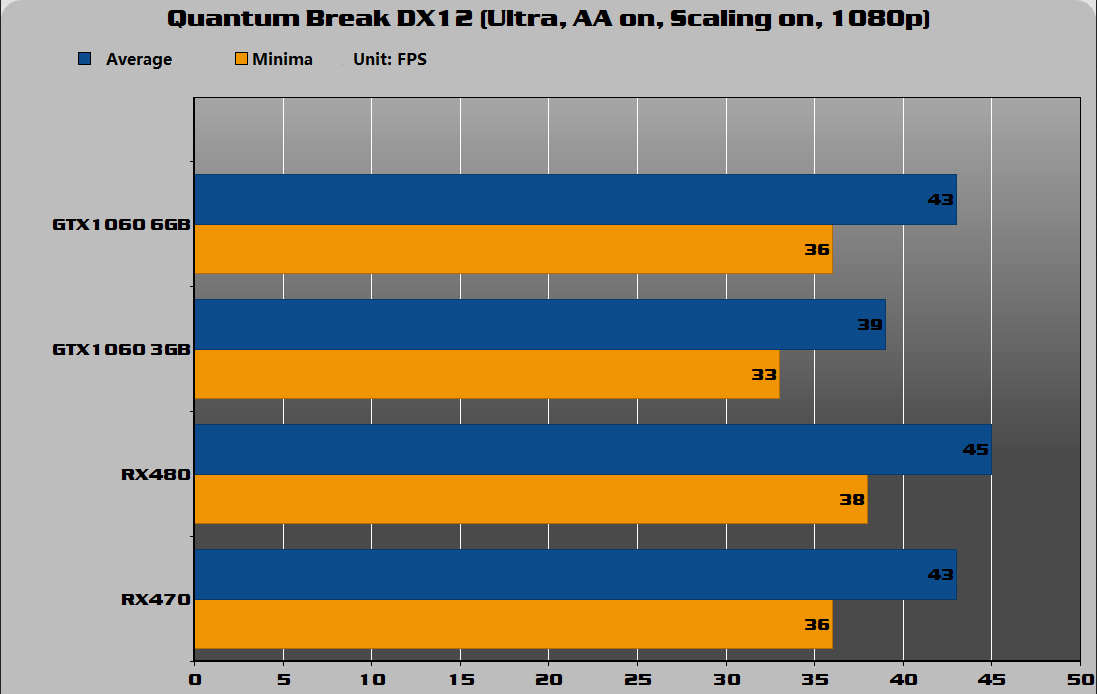 The latest from Remedy is a whole graphics benchmark, it performs better in AMD, but we see the results are tight.

Lara’s adventure powered by DX12 is another classic in the commonly used graphic benchmarks. We can appreciate how the 3GB 1060 has problems with the minimum fps, which also penalizes the average performance. It is also surprising the result of 470, which is very close to the 480, almost equaling it. 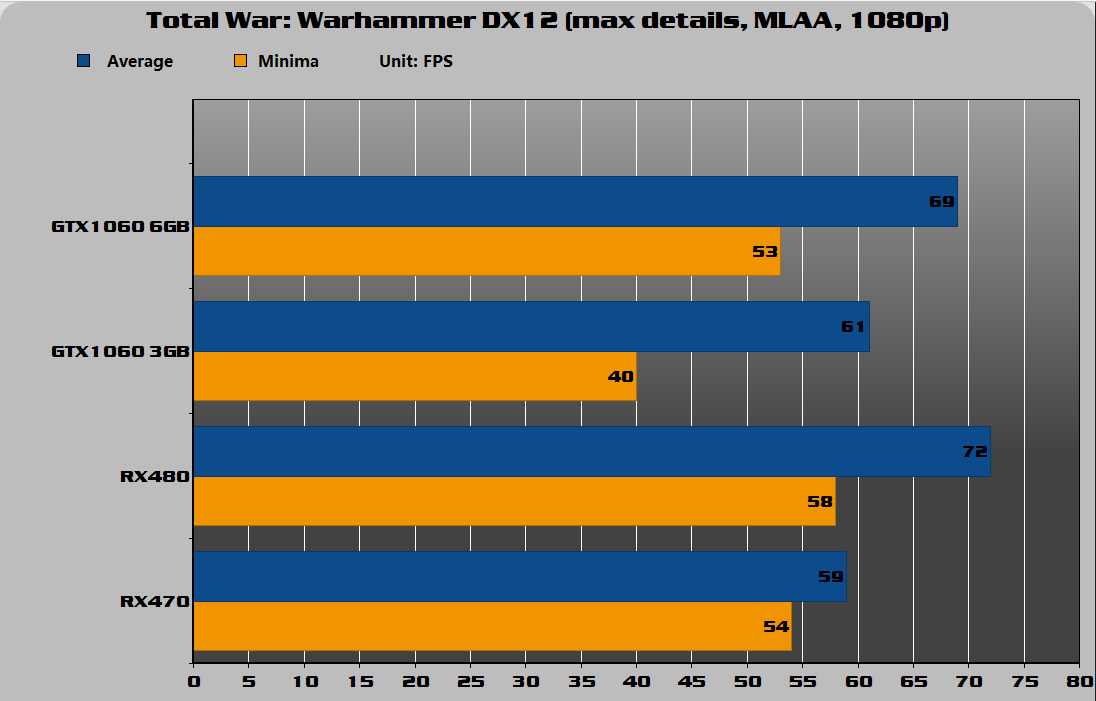 Another champion of the DX12. We see very close results, although the RX480 takes the victory. 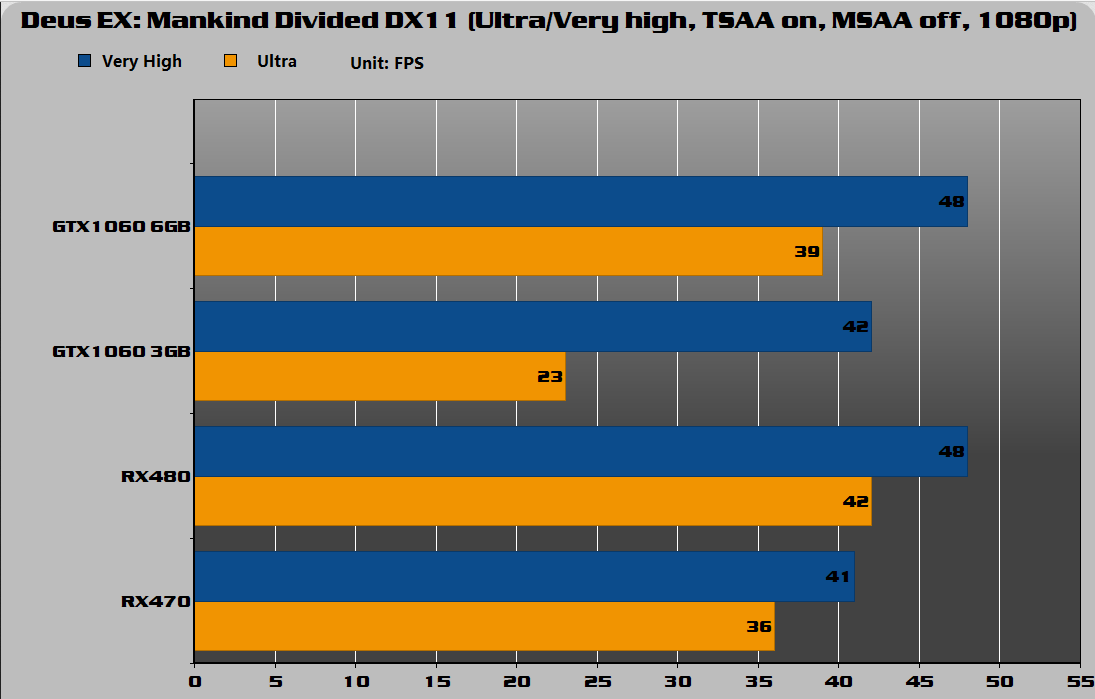 One of the latest releases and one of the most demanding games till date, with heavy use of tessellation and ambient occlusion. We tested it in ultra and very high, with the settings left untouched, with MSAA disabled as it completely drops the performance. We can see how the two AMD cards perform superbly well, no wonder this game is sponsored by AMD. The 1060 suffers greatly due to lack of VRAM, specially on ultra, as it has its RAM full throughout the test. The 6GB card does not fill it’s VRAM, but it’s affected more harshly on ultra, lagging behind the 480, while it ties to it when we put the settings on very high. 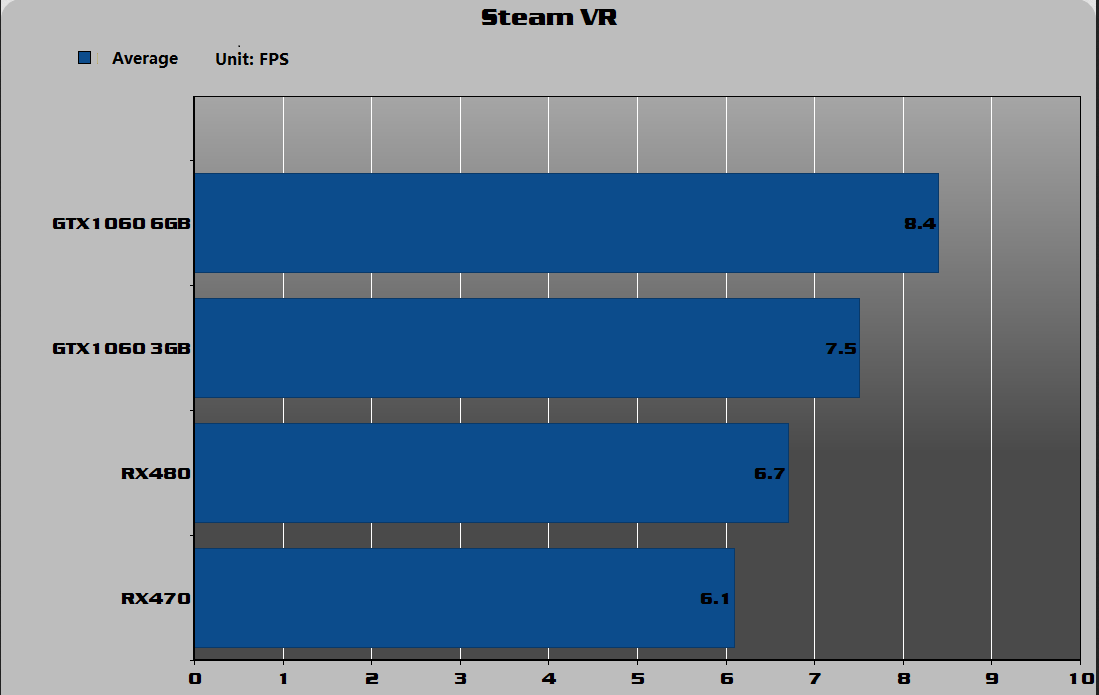 The Valve performance test to know if you are prepared for VR is not a graphic power test itself, but it indicates through estimates if we are prepared for VR. A result of more than 6 guarantees a full VR experience, and obviously the higher the result, the better the experience. Knowing this, we can tell that Nvidia cards are better prepared for virtual reality that the AMD cards reviewed here.

We are facing the four graphics cards with the best price/performance ratio on the market, being possible to find any of them in the range from 200 to 300€. Both AMD cards behave really well, both are cool, efficient and very powerful, but Nvidia cards are a small step above in efficiency and performance. The jarring note it’s put by the 3GB 1060, with a price of 215 and the performance of a 480 it could be a monster, but the lack of VRAM means not being able to put everything on ultra this days, and that implies a shorter life expectancy.

Instead, the 4GB 470 was a real champion, it did not succumb even to the new Deus EX on ultra which marked RAM consumption peaks of over 4GB on its older sisters. One thing we would like to highlight is Wattman, the control and OC application included in AMD’s Crimson drivers, with which we can control the rate of frames per second, the fan speed curve, the card frequency, the voltage, the temperature threshold, etc… all in a very easy and visual way.