In the world of hardware, if you want to improve your computer performance, everything goes through choosing a good solid state drive, characterized by a high speed data transfer (up to 10x more than mechanical drives) and minimum information accessing times. [toc]

What is an SSD?

SSD stands for Solid State Drive. These are devices that use memories such as flash drives or USB drives, but of a higher quality. They can come in different formats, from typical portable hard drives to small cards that plug into special ports (mSATA or PCIe).

The difference between a hard drive and an SSD is the time it takes to access information and data transfer. On hard drives, the discs are turning all the time and only read information when the head passes through the point where the information is. With SSD memories, it directly accesses the information at any time it wants. The transfer speed of the hard drive depends on the speed of the disc, but is something that can’t be increased lightly, especially in the case of hard drives destined for home users.

The transfer data speed of a hard drive is usually around 100-150 MB/s in a 7200 rpm, and a “domestic” SSD easily reaches 500 MB/s (both transferring large files between devices with the same speed, or higher) though there are others that can reach speeds of over 1,500 MB/s.

Things to keep in mind

If what you want is to have a gaming PC, it is best to always have a SSD for the operating system, because the operating system will boot in about 10 seconds. If not, that’s okay too, because the SSD don’t bring any significant advantage to your in-game experience. When installing it in a normal hard drive (preferably of 7,200 rpm) the games will allow you to play in a way that it doesn’t have to access different information simultaneously on the same disc, thus improving the response time of the computer.

It is also desirable to have a backup power supply unit (such as an UPS) for computers that use an SSD. There is great evidence that, for now, most SSDs have a high probability of losing data or getting damage if they suddenly shut down, as it might occur in a blackout. In the case of laptops obviously this problem does not exist unless the battery has come defective, and this is not uncommon.

Despite this problem, these data losses are not so common and even less today, since the technology has evolved and matured from quite a few years ago. Still, the recommendation is that you use the SSD for the OS and to not store important information on it, and rather in a hard drive. In many cases, if it is for a desktop PC, you will need an adapter of the standard size of a SSD (2.5 inches) for a 3.5-inch bay.

In my case I have it floating inside my PC as it has no moving parts, but there will be people who want to have everything placed on their PC. Also, make sure you also that your motherboard or laptop supports SATA 3, in order to takes advantage of up to 600 MB/s transfer that SSDs offer, instead of the 300 MB/s that SATA 2 allows.

The price will depend greatly on the reliability, capacity and speed that the SSD has due to the firmware that the manufacturer uses. In pre-2014 drives it was usually necessary to enable a OS feature called TRIM that just works as a garbage collector for the disk to free up unoccupied space, as unlike a hard disk, deleted files still occupy space on the disk until the TRIM is used.

Now many firmwares do it periodically, and in other operating systems, such as OS X, it does it by default if the SSD is provided by the series manufacturer. You can additionally activate the control that makes the SSD do it, but in practice this is not absolutely necessary anymore.

SSDs, to maintain their performance as high as possible, should have a part of their free space, so I usually recommend you to have at least 10-20 percent of the total free space. It is because of the way to save the information on the drive that I will not go into much more detail in this article. On some models the need for free space will be larger and in others much less, depending on their firmware. The newest models usually already include sufficient over-provisioning for possible defective sectors and prevent also slowdown when it’s almost full, though it is advisable to leave at least 10-20% of unused space.

How to choose your SSD

But choosing a suitable SSD is not always easy because it is a “new” technology that has been around the market only a few years, in fact, less than two years at reasonable prices, and their prices are still going down. So, in the end we will give you some indications for choosing the SSD with the best quality/price relation that is best suited to your needs, or if you only want to buy the least expensive one. They tend to be ideal for laptops as a way to improve performance in Macbook Pros and laptops in general, as the Macbook Air and Ultrabooks are sold with this type of storage (low power consumption and fast start as big advantages).

The drives from 240 to 256 GB are going to have the most attractive prices for most users. The parameter of read/write speed given is the sequential (that is, copying files of multiple gigabyte size from of one device to another). To see the Random 4K block measured in IOPS, you can consult the product sheet itself.

Note: If you see anything wrong in this article, you see something is not clear enough or if you disagree, please indicate it in the comments and help us to improve it. Try to maintain a positive and collaborative attitude, as the world is already filled with people with negative and destructive attitudes. It is through talking that people understand each other, and it is always possible that you may get conclusions that are far from what we want to convey in the article.

In each category, we also provide the Pro Version to choose. The Pro Version of SSDs are more expensive and in general they have great read and write consistency, that is to say, they maintain the highest possible speed at all times. There are some lower priced models that also have less consistency, and therefore, in prolonged hard disk activities (eg film ripping or graphic design), poor transfer consistency directly affects the maximum performance that can be obtained with them. They also have better error protection and longer durability.

This amount is usually ideal to have a SSD for faster OS boot and benefit from lower application load times. It’s usually sufficient for a Windows operating system, and in the case of the Mac is often preferable to opt for 240 or 256 GB.

This price range usually offers enough capacity for the operating system, regular applications and user data, but it is also the minimum I recommend for a Mac. In the case of Windows a 120 GB disk is sufficient for the operating system and frequent applications, however, opting for 250 GB also allows you to install a game, improving performance in loading textures, levels and scenography.

A high-end choice from Samsung, which is very fast and very consistent in speeds, is the SSD 850 Pro. It has the highest durability of all because it has been produced with a durability of 150TB, which means that you could record 40GB daily in the drive for 10 years before it begins to have read issues. The downside is that its price is high, but price / quality is fine as long as you consider drive reliability a priority, so that you never lose your data (I never recommend leaving important information in an SSD, except for these high-end models with high reliability, which are level with those sold for servers).

Then you have other high end models, fast and with read/write results that are highly consistent. The SanDisk Extreme Pro SSD has a much more attractive price, whereas the OCZ Vector 180 is a newcomer and its price has yet to stabilize.

This category is not really economic in terms of the price per giga of storage per dollars invested in the SSD, but for those who wish to have more available storage in addition to the fastest, most reliable disk on the market, this price range is ideal. It tends to be more than enough to have the operating system, day-to-day user applications, and several games installed on one disk. So, it is a good option if you want a device that has a single unit and will not limit you in the future.

Then we have the top range models, the fastest with read and write results that are highly consistent. They also have a 10 year warranty and good durability.

Another high-end option from Samsung, which is very fast and very consistent in speed is the SSD 850 Pro. It has the best stability of all because it was produced with a durability of 150TB, which means that you can record 40GB daily in the drive for 10 years before you begin to have read/write issues.

Due to SSD prices, it is possible, in certain offers, to acquire a cheap 1 TB SSD, but generally, this is not a worthwhile option. 1 TB is enough to have a considerable quantity of Steam games installed (30 space-occupying games), personal photos and videos, and more. Even so, in these cases it is better to install the operating system on a 120 or 250 GB disk, to be able to reinstall it at any time, and keep the 1 TB disk separate for storing other data.

Various 2 TB SSDs have started to come on the market, but their price per giga is usually quite high.

M.2 is a specification that describes a number of possible different form factors for SSDs. Each may have different interfaces, being common to all the PCIe. This gives them greater speed, which can overcome by far the usual 550 MB / s of SATA SSDs (such as the 2.5 inches and mSATA models). 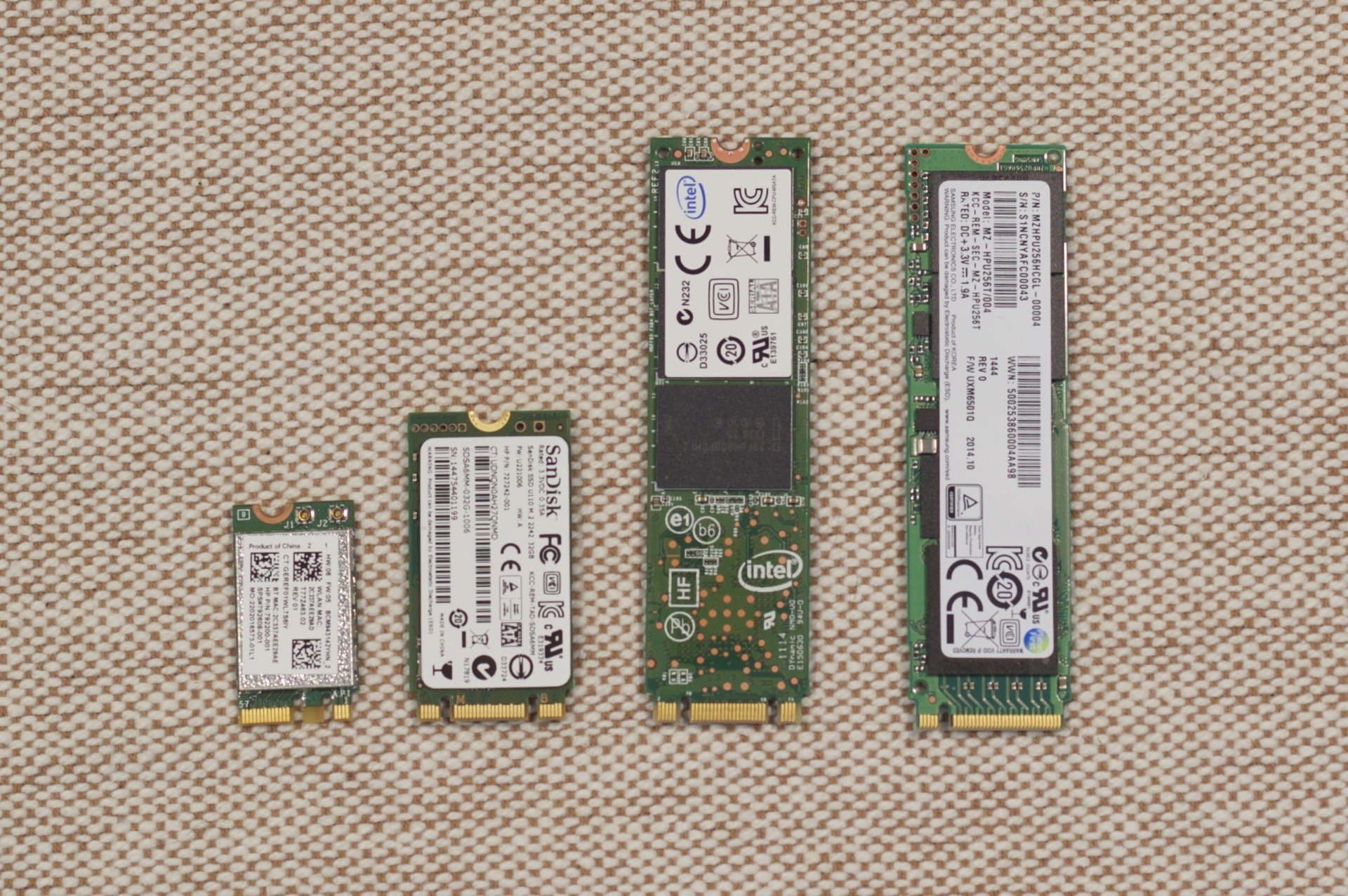 Right now there are few SSDs options that use any of the sizes M.2, since they have come with the Z97 Intel chipset, but in the coming weeks and months it will increase as the sale of motherboards with this chipset accelerates. M.2 technically substitutes the mSATA format, but it has backwards compatibility with SATA 3 in two of four form factors that M.2 has.

The main advantage of this Samsung SSD is a really high transfer rate of up to 1,200 MB / s, and they can be put in RAID 0 for even greater speed. Most motherboards of ATX and Micro-ATX size (if not all) have a connection to this type of plate.

The Plextor M8Pe is a SSD in PCIe card format with PCie 3.0 x4 connection which allows it to reach speeds of up to 2500 MB/s, which makes it one of the fastest SSDs on the market, and without the problem of heat limitations which usually occur with other SSDs of this type, or, at least, it prevents from reaching these limits more than others thanks to its dissipator.

Since SSDs can come in different form factors (mSATA, M.2, 2.5”), you may find yourself at some point in the situation to of reusing one mSATA from a laptop for your PC in which you don’t have the right connection. You will need an adapter, as you see below.