The good: unsurpassed protection against malware. Its various phishing shields protect you from Internet fraud in virtually all situations. It is the fastest and at the same time, along with Norton Security, the one that consumes less computer resources. Its optimization tools are simple and extremely useful.

The bad: its interface can be improved. We miss some form of parental control, a boot disk or the available space for Internet backups.

Conclusion: Though the competition is becoming closer, as in the case of Kaspersky and Norton you could say that they’re almost close on its heels, Bitdefender still remains, this year, the best antivirus for Windows and Mac. It definitely needs to be more generous when it comes to including some additional tools, such as those mentioned above.

Bitdefender Antivirus Plus 2016 – a Review

This protection software of Romanian origin, made big brands such as Norton or Kaspersky to get down from their high horse, and it’s becoming quite a habit for it to lead the lists of best antivirus for PC and Mac this year. We will explain you the reasons one by one.

No in one, but for several consecutive months, Bitdefender has achieved an effectiveness of 100% in AV-Tests, the independent technological laboratories of greater authority, and whose statistics are the main yardstick in the field of antivirus programs. In these tests, the ability of security applications to detect the most widespread malicious code is evaluated, and in them, Bitdefender Antivirus Plus (as we have been saying for many consecutive weeks) has performed impeccably against malware.

While it’s true that PC or Mac users worry every day in a greater extent and with all the more reason, about the threats to privacy (and your bank account) that abound on the internet and that go in many different ways,

We often group these threats under the term ‘phishing’. To avoid all these scams that can come to you in the form of emails, instant messages, from falsely authorized websites or when doing certain transactions, Bitdefender Antivirus Plus 2016 also has a magnificent shield, which showed again in AV-Tests to be infallible, not even one attempt to use private data fraudulently passed the filter.

In this area where it was the undisputed king, Bitdefender has a tough opponent, really at its height: Norton Security. But otherwise there’s no other antivirus for Windows or Mac, among the important brands that will make your computer spend less resources than ever.

Bitdefender Antivirus Plus 2016 is, indeed, if we take into account its average performances in as a suite of security tasks, the one that consumes fewer resources than other antiviruses (along with Norton) or, in other words, it doesn’t slow down your PC or Mac as much.

Another thing is the impact on battery life when performing a complete analysis of the machine, in that regard there are (quite) more effective alternatives, such as Kaspersky or Panda Antivirus Pro. But the rest of the time Bitdefender remains in a second plane, discreet; you barely notice it and it carries operations faster than all its competitors.

One of the few perks that come with this program is related to the user interface, as the design seems rather simple (in the worst sense of the word), just too simple, and it even seems jumbled in some sections, such as in the Privacy section, where in addition to various antiphishing functions you can find a file shredder, or in Tools, a cleaning and optimization system that could be better organized. 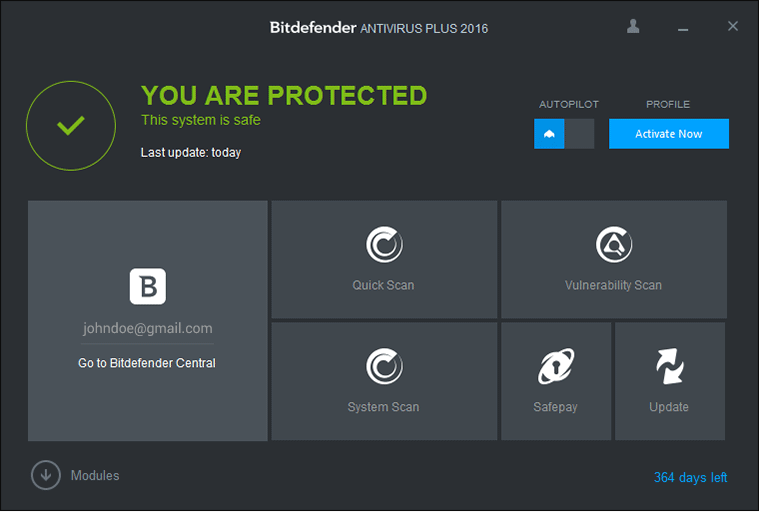 On the home screen, next to the two we just mentioned, we have also the Protection box in a big size, within which you can find the various analyzes that can be performed and the different degrees of Internet protection, and at the right of the three, in smaller squares, the buttons of updating, and direct links to certain tools.

Bitdefender technical support has been improving a little from year to year and though it’s still far from being perfect, is the best that can be found in this abstruse world of user support offered by antivirus software suppliers.

To begin with, you can find direct help via telephone and email in Spanish, something that is usually not at all common among antivirus software support, even among the most important (and if you don’t believe me, just ask for Kaspersky or ZoneAlarm support). While it is true that the phone customer support attention hours is somewhat restricted, as it’s from Monday through Friday from 9:00 a.m. to 6:00 p.m., you can also send an e-mail, but Bitdefender experts are “at your disposal 24 hours a day, 7 days a week,” but first you must fill out an email ticket… and then wait.

Moreover, we don’t understand this mania for filling up the customer service page with large fonts in which you can read the most common questions and problems, and then show you the possibility of support by phone or email in a tiny little box that you will only see if you go down. Could it be that they prefer the subscriber to just manage things on his/her own? We often wonder.

Finally, we noted the absence of an online chat or at least we haven’t found one, as maybe Bitdefender put it in a little corner with half millimeter characters, something that is becoming common practice among more companies, as they must have realized that chatting online with a technician live, while the program is opened, is precisely the most convenient way to get help for a large number of users.

So, finally, the support of the Romanian company is not bad (if you put it into perspective), but it’s not really that remarkable, either.

Here, as well as in the previous section, we got a bittersweet aftertaste. Well, it’s sweet because the additional tools that this program includes are all, without exception, very helpful, but we’re left a little bitter because we miss features such as parental control, some space on the Internet for backup, or a boot disk. That said, let’s see what Bitdefender Antivirus Plus 2016 provides, which as in the case of a protection suite of basic level, is not little at all: 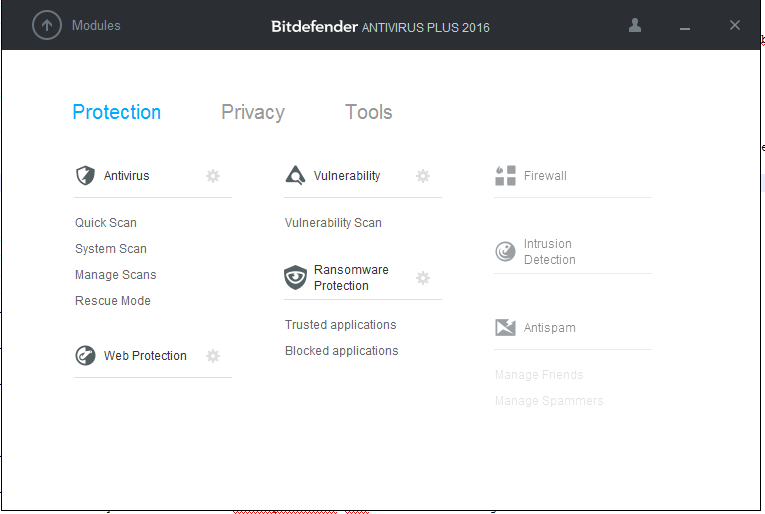 Yes, it is true that some features lack weight, but all that we outlined above are quick, simple, work well and provide your PC with an extra layer of protection and a really exceptional optimization.

Should I buy Bitdefender Antivirus Plus 2016?

For us there is no doubt. It does still not exist in today’s market, within the basic level of protection (and neither in others), a better antivirus for PC and Mac than Bitdefender Antivirus Plus 2016. Once you get it, you will have nothing less than the best defense against malware and phishing, the maximum speed of action and minimal impact on your computer, aside from a few extra tools that are great.

But we don’t let passion blind us. Just as we tell you this, we have to recognize that illustrious competitors such as Norton Security or Kaspersky Anti-Virus continue to improve, catching up in several sections (or even equaling in some) to Bitdefender, and if you happen to miss some function that those offer you, then Kaspersky or Norton can also be very interesting options.

More information about Bitdefender Antivirus 2016 on the Official site