Despite the very strong competition between the major players in the compact camera market, Canon’s Mark II is the clear winner. The original G9 X, released in 2015, already represented an audacious response to the growing popularity of smartphones. With the G9 X, Canon continues to silence those skeptics who consider that compact cameras, in the era of the iPhone X and the new Galaxy, are doomed to extinction. The compact camera industry still has a few tricks left up its sleeve! 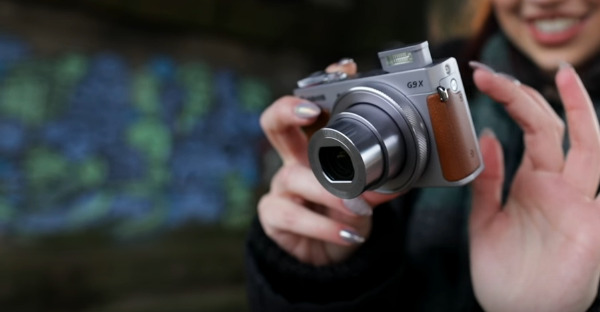 Retailing for under 500€, this camera has the best quality to price ratio of all the devices appearing in the complete comparison that I wrote at the end of 2017.

The Canon PowerShot G9 X Mark II differs very slightly from its predecessors. One thing is certain, this camera is very compact and can easily be carried around in a pocket.

There are two versions of this camera: one in silver and leather and another all-black version. Personally, I prefer the silver version because it more closely resembles Fujifilm’s high-end model (the design of which I have praised in the past). Its sleek and retro look is very appealing, especially since it does not affect in any way how easy it is to hold. The PowerShot G9 X Mark II does not have the same rubber thumb-rest that certain other models have. However, the material which partially covers the device (which is leather for the silver version) ensures a firm handhold due to its anti-slip properties.

It has a minimalist appearance which allows it to be highly compact. Its flash, for example, is built-in and retractable; applying slight pressure to the top of the camera releases it.

On the rear side of the camera can be found a 3″ inch display – a classic feature of this type of camera. Four buttons allow access to the camera’s main functions, namely enabling video capture and accessing the menu. The “Info” button either declutters or enhances the information displayed on the camera’s screen and can be used to control the grid, ISO setting and the various data provided by the camera’s sensors.

What’s more, this camera is equipped with a touchscreen; since this camera lacks direction buttons, its menus must be navigated via the touchscreen. I will speak about the G9 X’s functionality in another section.

Nevertheless, certain options are still accessible via the control knob located on the top of the camera which makes it possible to easily switch between user profiles.

This compact camera is equipped with a 3x optical zoom – not very powerful compared to certain other models which boast zooms of up to 25x magnification. However, it is coupled with a 12x digital zoom with good image depth. In any case, very few people really have the need for such a powerful zoom on a such a lightweight camera.

Its 1″ sensor provides this camera with optimal image capture quality (the main reason why I ranked it #1 in my comparison). Its camera’s 20 Mpx sensor allows it to compete with other cameras in its price range (even though its resolution is not this camera’s most impressive characteristic). This camera’s most important feature is its DIGIC 7 processor, the most modern processor of any camera in Canon’s product lineup. First presented in Singapore in January 2017, this processor is also used by the G7 X Mark II. This processor’s image quality is considered to be among the best by professional photographers, namely due to the sharpness of the images it is able to capture and to its subject tracking abilities (even subjects in motion).

This camera’s ISO sensitivity ranges from 125 to 12800, a wider range than any other camera retailing for the same price. However, it is in terms of “Image quality” that the PowerShot G9 X Mark II’s true performance can be evaluated.

In burst mode it is capable of taking up to 8.2 photos/second – some 21 images/second in RAW format and 38 in JPEG format.

It is able to store up to 64 GB of data on an internal SD storage card which translates into around 8 and a half hours of Full HD video footage.

As far as amateur use is concerned, image quality is generally measured by establishing the ISO level at which film grain starts to become visible. For this camera, the grain remains invisible up to a value of ISO 3200; at ISO 6400, images begin to lose their sharpness, but shapes remain clearly distinguishable. In summary, the Canon PowerShot G9 X Mark II performs very well for a camera in its price range.

In automatic mode, images have good light balance. The focal length – via the 3x zoom – ranges from 28 to 84 mm, making it possible to easily achieve depth of field effects.

The camera’s autofocus system uses the Digic 7 processor for detecting subjects. It is fast, silent, and remarkably precise. It is possible to select a subject via the camera’s touchscreen simply by clicking on it. Hardcore photographers can also adjust the focus manually using the touchscreen, although to be honest, due to the fluid operation of the camera’s AF, manual control is not especially useful; the Digic 7 processor is capable of producing miraculous results.

This camera is also very good at JPEG compression: it produces brilliant, colorful images free from compression artifacts. The only problem I noticed is somewhat excessive noise reduction on some images (ISO in excess of 3200-6400). Also, photos can end up being somewhat glossy in JPEG format.

Its video recording abilities are slightly inferior to those of a hybrid camera. Limited to FHD (1920×1080) definition, videos recorded by this camera – at up to 50 images/second – have good overall quality. This camera’s optical and digital stabilization systems help compensate for any shaking – one of the main problems afflicting cameras weighing less than 500 grams.

The Mark II’s battery autonomy is not its strong suit. It has an autonomy of only 235 photos – a little less than that of other competing models in the same price range. Its economy mode makes it possible to extend the Mark II’s autonomy to approximately 315 photos. This data was collected by performing standard test procedures which involve using the camera’s flash and WiFi connectivity.

A more conservative usage could allow you extend the G9 X’s autonomy to around 350 photos. Contrary to other newer cameras, the Mark II cannot be recharged via a micro-USB cable, which is a shame. This camera comes with a proprietary charger and you will need to remove the battery from the camera every time that you want to recharge it. On the upside, this means that the Mark II’s batteries are easily replaceable and since batteries for this camera are not very expensive, if you plan on going on an adventure you could build up your own little stockpile of replacement batteries.

Anyone looking for a classy, easily transportable and easy to use compact camera is sure to enjoy the Canon G9 X Mark II. This straightforward camera is capable of taking much better photos than any smartphone; its JPEG quality is excellent and its WiFi and NFC connectivity make it easy to share photos and videos. Equipped with a high-end processor and many powerful features, it has what it takes to stand out from the competition.