Review
Verdict
When we tested the second generation of Amazon’s Echo Dot, we were forced to conclude that it was not particularly well-suited to playing music. However, in contrast, the third generation of Amazon’s connected speaker is quite good; the newest Echo Dot has vastly improved audio quality. What’s more, given its affordable price, it is unquestionably the most inexpensive way of bringing Alexa into your home. Our only criticism is that it no longer features a customizable plastic shell as previous versions did. Apart from this shortcoming, for its price, the Echo Dot is a near-perfect connected speaker..
What we liked
Con

By launching its Echo Dot, Amazon took a giant leap forward in the field of connected home technology. The Echo Dot is the most affordable way to bring Alexa into your living room and it also makes a great gift.

We liked its look

Amazon’s first two Echo speakers (the Echo Dot and the Echo Show) had a highly functional and rather basic plastic shell design. In order to compete with the much more aesthetically appealing design of Google’s Home and Home Mini speakers, Amazon was forced to redesign its newest speaker – finally providing it with a design worthy of its performance characteristics. 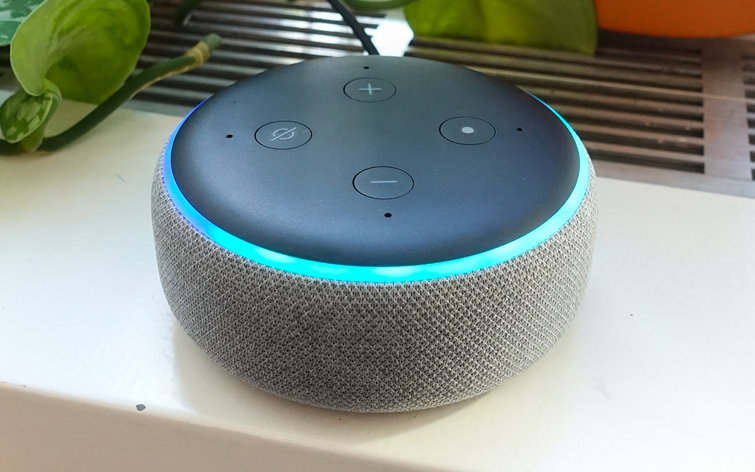 Consequently, the third generation of the Echo Dot has replaced its low-end plastic finish with a more contemporary-looking mesh fabric. The new Dot’s edges are also rounder than those found on previous versions, giving it the appearance of a hockey puck. Most people would be happy to have the new Echo Dot on display in their living room. 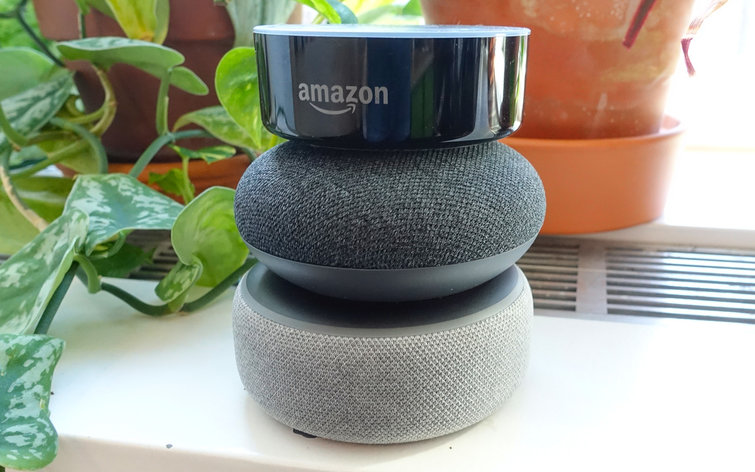 As with previous versions of Amazon’s speaker, the top side of the new Echo Dot is bordered by an LED light that glows blue whenever Alexa is listening. Amazon’s newest speaker is also equipped with two buttons: one to turn its microphone off (if need be) and another to activate Alexa. 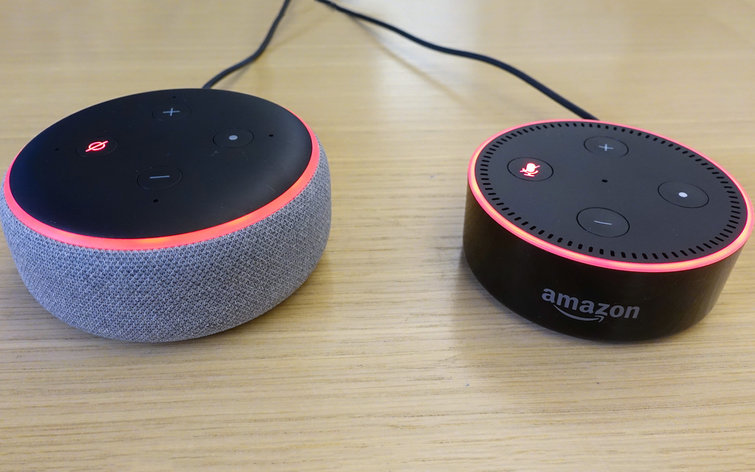 Measuring 99 mm in diameter and 43 mm in height, the third generation of the Echo Dot is a little larger than the previous version (83.8 mm x 33 mm).

While Amazon’s newest speaker is available in three different colors (black, gray, and white), its new design prevents it from being used with third-party plastic shells and accessories (as was the case with the second generation).

As with the second generation of the Echo Dot, it is possible to connect an audio source to Amazon’s newest connected speaker via its 3.5 mm audio Jack or to listen to music wirelessly via Bluetooth. The new Echo Dot also makes use of a new WiFi standard (transitioning from 802.11n to 802.11ac).

We liked its audio quality

The new Echo Dot’s speaker measures 28 mm in diameter – 12.7 mm larger than the speaker on the previous version. This increased size really makes a difference: whereas listening to music on the second generation of the Echo Dot was a painful experience, it has now become very enjoyable. 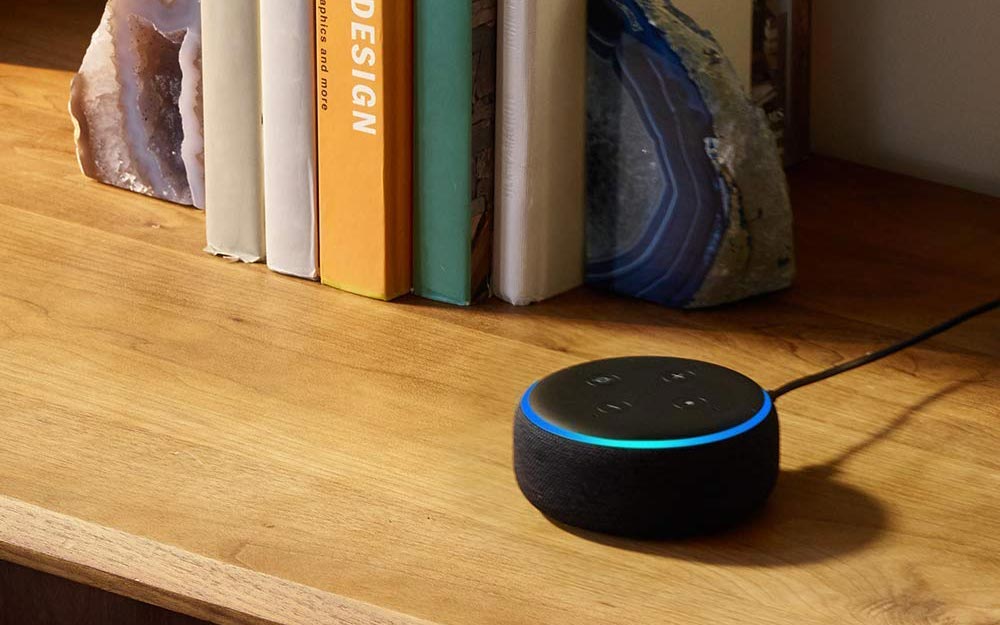 It would be fair to say that the Echo Dot now outperforms the Google Home Mini is nearly all respects. When listening to “Raspberry Beret” by Prince, the Dot has a superior dynamic range and more rounded bass tones. Unfortunately, the Echo Dot’s default equalizer parameters make voices sound a little drowned out; however, by adjusting the speaker’s treble settings you will be able to improve its output to a certain degree.

While Prince’s voice comes across loud and clear on the Google Home Mini (the same thing can be said about Aretha Franklin’s voice when listening to “Respect”), in comparison, the Dot’s rendering of voices seems somewhat approximate.

That having been said, most users will still probably prefer the Dot’s more rounded sound to that of the Home Mini. In the end, the Echo Dot’s tweeter and subwoofer place it a notch above the Google Home Mini. What’s more, all Echo speakers now feature a new ability: the ability to ask Alexa to adjust the speaker’s equalizer by saying “Alexa, set bass to maximum” or “Alexa, reset equalizer”, for example (the speaker’s bass and treble levels can be adjusted over a scale ranging from -6 to 6).

We liked what Alexa has to offer

The second generation of the Echo Dot speaker was already quite good at picking up a user’s voice thanks to its seven built-in microphones and the newest version of Amazon’s connected speaker is just as sensitive and responsive.

What’s more, Alexa is constantly increasing her abilities (to the point where it has become hard to keep up with her). Suffice it to say that, to date, Alexa has over 50 000 skills such as the ability to play Jeopardy, to turn on a light, to order a pizza, and even to arrange for a driver to take you to the airport. 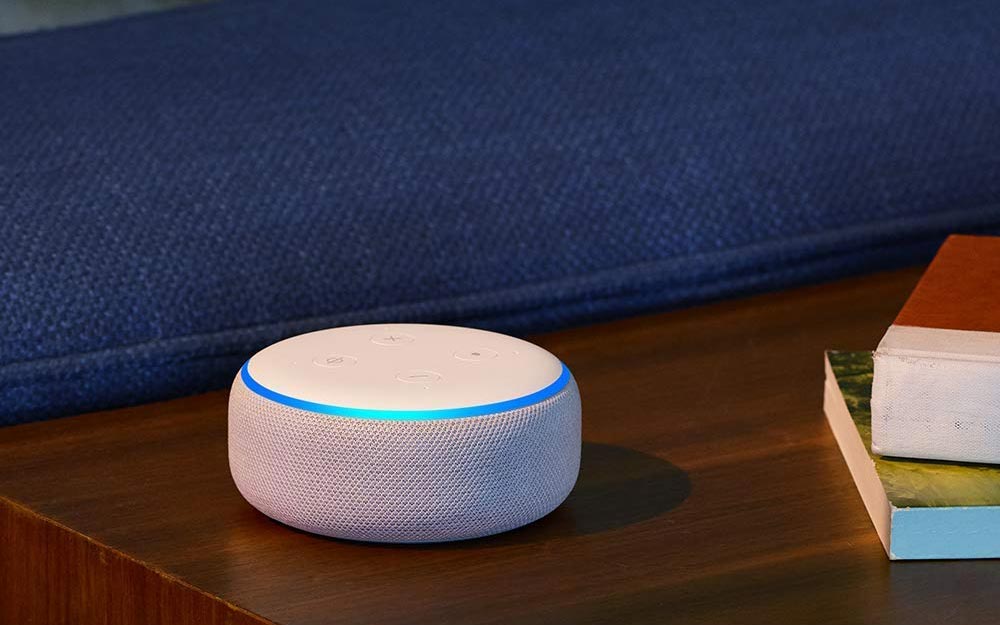 Like all speakers equipped with Alexa, the Echo Dot is able to play music directly from Amazon Music, Spotify, Deezer, and other online platforms.

In the same way that Amazon is constantly improving Alexa’s skill set, it is also continually improving the functionality of its connected ecosystem; these days you would be hard-pressed to find a connected device that isn’t compatible with Alexa. Most brands of connected thermostats, light bulbs, locks, and connected switches/outlets can be controlled via Alexa. Amazon is also developing “routines” for the connected home – making it possible to control several devices via a single voice command. Say: “Good night, Alexa” to turn off all your lights and lock your doors, for example.

You can even use Alexa to place a call, send a message or broadcast an announcement to all or your home’s Echo Dot speakers.