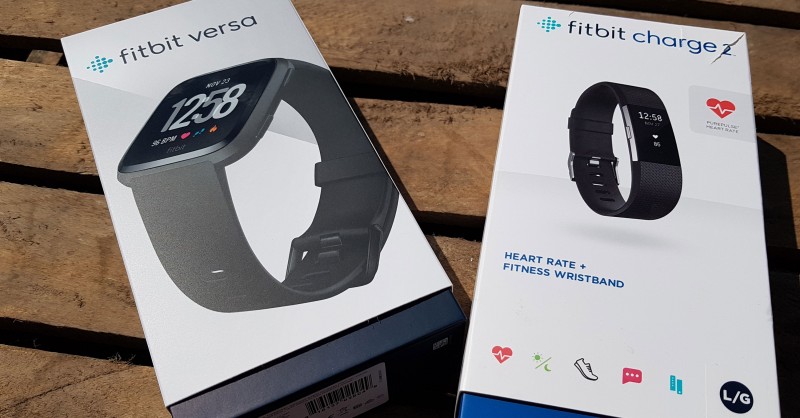 With the Versa, Fitbit has brought a new and very interesting fitness tracker to the market. Where the Fitbit Versa at first reminds you of the Ionic or Blaze, the new tracker is at the same price range as the very popular Fitbit Charge 2 and Charge 3.

Thus, we are comparing the Fitbit Versa with the Fitbit Charge 2, as we think it will definitely be very interesting. Even more interestingly as the Charge 2 has been my favourite of the Fitbit family thus far. In this article I compare both devices. The questions that will be answered are:

After the Versa, the Charge 3 also came to the market, which I have also compared with the Charge 2. If you are interested in seeing this comparison, you can have a look here: Charge 2 vs. Charge 3.

Extremely important, though barely noteworthy for Fitbit – pulse measurement. Both the Versa and the Charge 2 have 24/7 pulse measurement. Thus, your heart rate is continuously being measured. Many devices from other manufacturers only measure your pulse on command. For day-to-day use, that is not very helpful. 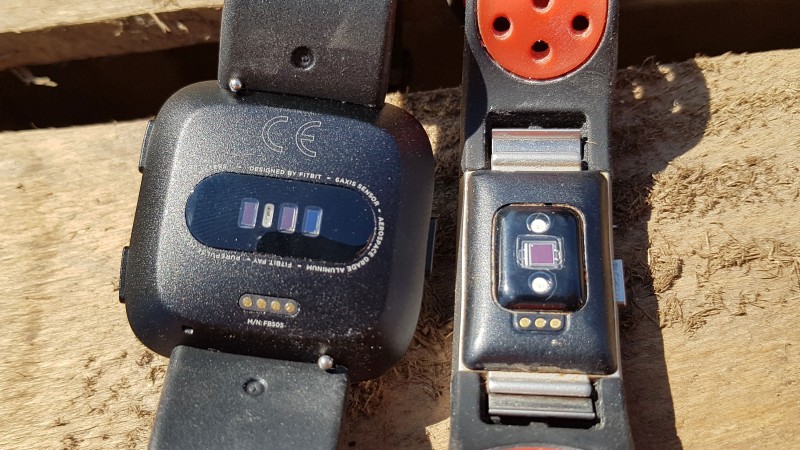 Optically they are different. Both work with PurePulse technology and convince. Generally, pulse measurement by Fitbit has proved itself very well in its previous models. That is still the case now. Although the sensor looks different, Fitbit is sticking to its PurePulse technology for both devices. If you would like to find out more about this, you can look at the manufacturer’s website.

Waterproof – go swimming with the Versa

This is something that many as well as me have wanted for a long time. You can go swimming with the Versa! Indeed, you could also do this with the Ionic or the Flex 2, but one model is very expensive and the other does not have pulse measurement.

This makes the Versa the first Fitbit model to be in the lower price range and is officially designed for swimming by the manufacturer. Fitbit advertise waterproof use for up to 50 metres.

Many are indeed saying that the Charge 2 can also handle water and has survived showers as well as swimming. The manufacturer does not guarantee this, though. The Charge HR had a problem where water damage only appeared later.

Once again, Fitbit is doing without an integrated GPS module. Until now, there has only been one model with a built-in module. That was the long-outdated Fitbit Surge. The reason for abandoning it presumably has something to do with high battery usage through the GPS.

However, both devices can use the GPS on your smartphone. Based on my experience, this works really well. Although, energy saving mode has to be disabled on your phone. It should be noted that not every Fitbit tracker can use the so-called connected GPS. You cannot use this on the Alta HR*, for example.

Aside from route recording, the use of GPS is not really relevant. It is only actively used in training mode. Fitbit can also measure the distance with its motion sensor.

NFC integrated in the Versa

Contactless payment is not quite so widespread in Germany yet. It is growing steadily and is finding evermore relevance in everyday life. Personally, I am happy about it, as it is extremely practical. Now that larger companies like banks and Google are promoting payment via NFC, it is an interesting point.

Integrated memory and music for the Versa

This point closely resembles the Ionic and Blaze models. The new Versa has built-in memory for music (2.5GB). The Versa does not have audio output. You can, however, connect headphones directly via Bluetooth, enabling you to listen to music without your smartphone. Fitbit does not offer this for the Charge 2.

The Charge 2 only has the internal memory for saving fitness data for up to 7 days. This is also the case for the Versa. In this way, they do not have to be synchronised every day. Interestingly, this cannot be done without a second device.

Wi-Fi – built into the Versa

Unlike the Charge 2, the Versa has a Wi-Fi module (WIFI 802.11b/g/n). The Wi-Fi is used to transfer music as well as the streaming service Deezer. So, the Versa can connect to the internet on its own.

Eventually the connection can even be used for developers of apps and a direct connection to the internet.

The Charge 2 has a slightly better battery life than the Versa. The Versa is advertised to have a runtime of up to 4 days. For the Charge 2, it is 5 days. The reason for this is the increase in functions as well as the larger display on the Versa.

Both devices are charged via a special Fitbit charging station. It does work with USB, but it is not standard. Fitbit is once again bringing a new variant of the charging station to the market. 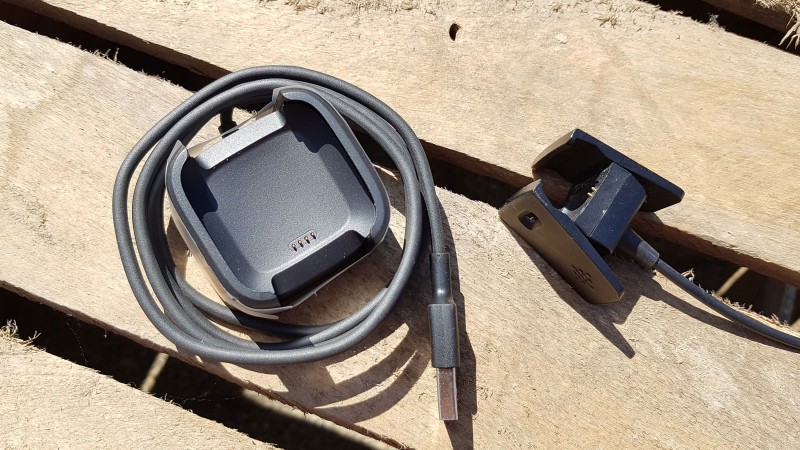 Charging stations for the Fitbit Versa and Charge 2

I would be very happy if Fitbit finally went back to standard USB charging. Fitbit itself has no standard for all its own devices. At the moment, you always have to think about the charging station. This is a particularly big deal for those who travel a lot. In this case, it is worth buying a second charging station* here. It is possible to do this for both the Versa and Charge 2.

Now to the functions of both devices. The Fitbit Versa comes with its own operating system, Fitbit OS, enabling it to offer a few smartwatch functions. You can use apps on it and they are even offered by third-party developers. This is not possible for the Charge 2.

With that the Versa can offer a lot more, such as starting guided training. You can also use it to control music. As aforementioned, you can control music playback directly from the watch. Once again, we see similarities with the Ionic*, the model which Fitbit brought to the market before the Versa.

Both devices offer the following functions: guided breathing exercises, multisport tracking, notifications, sleep analysis, floors, as well as the standard steps, calories and so on.

Not available on the Charge 2, the Versa also has health tracking for women.

With the Versa you can also respond to messages on Android, although in a somewhat limited way – you can send pre-made messages. This is not possible on iOS.

As with the Fitbit Ionic, I was also afraid that the Versa would look very big and clunky. But it wasn’t. 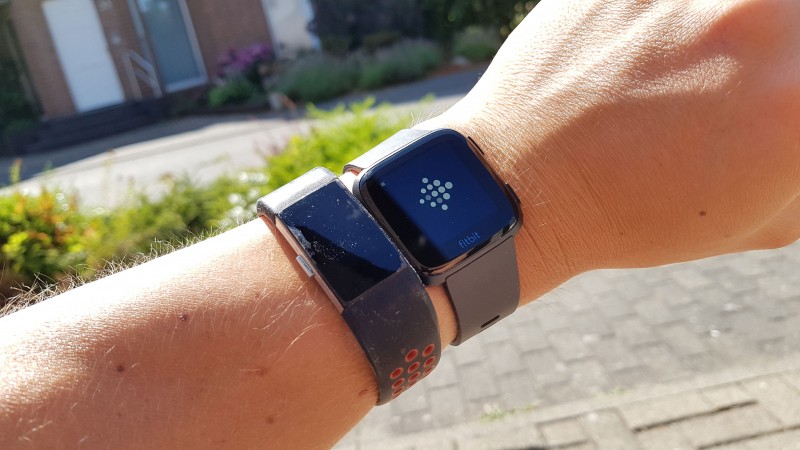 To compare wearing the Fitbit Versa and Charge 2, the Versa looks a bit like an Apple Watch. Of course, the Versa is larger than the Charge 2, so that you can see more on the display. Nevertheless, I do not think the Versa is too big and is even quite modest. That was always my argument for the Charge 2. The exact measurements can be found in the table above.

Changing armbands has become standard for Fitbit products and it is a very cool feature.

Armbands can be replaced on both the Versa and the Charge. It is quick and easy to completely change the appearance of the watch. Indeed, it is a little less smooth with the Versa than with the Charge 2 and takes a few seconds longer.

By the way, you do not have to decide on the size prior to purchasing the Fitbit Versa. The manufacturer just sends you both sizes. 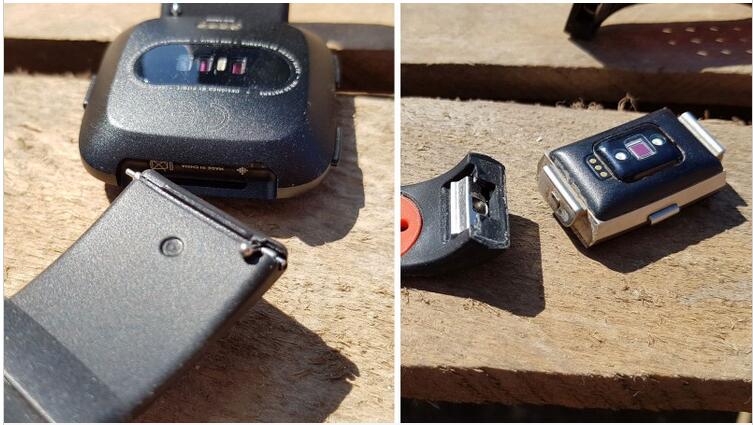 The closure on the Versa is a little more complicated.

Yes, there are also quite a few copy-cat armbands for the Versa already, which are relatively cheap. You can see a very large selection of armbands for the Fitbit Versa here*. For the Charge 2 there is also a lot on offer here*.

For the Charge 2, I had many armbands that were not from Fitbit and was satisfied. This included a red sports band by MoKo, which I have written a report about.

What are the concrete differences?

Along with the difference prices, both Fitbit models also have different hardware and functions.

Having compared them in detail, let’s briefly summarise the most important differences. The Versa is a little larger than the Charge 2. The Versa has the Fitbit OS operating system and offers more possibilities for the software and use. 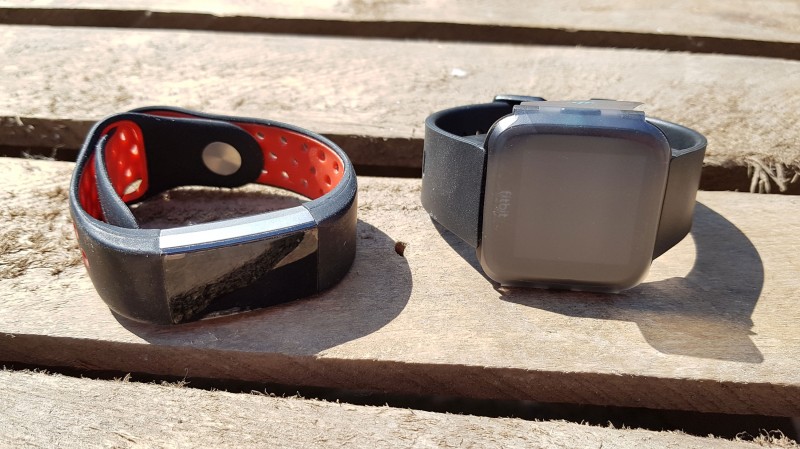 The devices also differ in their hardware. The Versa has NFC and is waterproof. For both devices, GPS is only available through the connected variant.

Furthermore, music can be saved onto the Versa and played without a smartphone, with the help of Bluetooth headphones. The Versa does not have a headphone jack.

Which device is right for you?

When asking about the right device, there is also the question of usage. If you just want a simple fitness tracker with good functions, the Charge 2* would be fine.

If you want to go swimming with the tracker or even listen to music, the Versa* is the right choice for you. As for whether the Charge 3* would be better for you, see the comparison between the Charge 2 and Charge 3 here.

If you do not have a fitness tracker and would like to buy one, the Versa will serve you well. You get more for a not much higher price. This is one point which shocked me with the Ionic. It too has many functions, but they also came at a dear price. The Versa, in terms of price, is more a new version of the Charge 2.

Is it worth upgrading from the Charge 2 to the Versa?

If you already have a Charge 2, you might be wondering whether it is worth upgrading to the Versa. In my opinion, it is. You could also consider upgrading to the Charge 3*, which came to the market a little later. For that, you can look at the comparison between the Charge 2 and Charge 3.

The Fitbit Versa has a big added value especially if you like to go swimming. For me, the ability to listen to music through the watch adds a lot of value to it, as you do not always have to be near your smartphone.

In addition, the Fitbit Versa also offers a few more nice functions, which come from its noticeably complex operating system, the Fitbit OS.

Unlike for the Fitbit Ionic, I would recommend upgrading to the Fitbit Versa*.