GDDR6 Memory, is it really a good idea?

With the announcement by Samsung that they are already developing the next graphic memories GDDR6 our conception of the industry has revolutionized “a little”. In this article we are going to question whether this type of memory is really needed considering that the HBM2 is at hand, and in fact the HBM3 is now also under development.

It’s been a few days since the memory industry was shocked. Samsung announced the GDDR6, a graphic memory that will replace the current GDDR5X that equips the latest generation of NVIDIA GPUs, SK Hynix has already announced that it is developing the HBM3 memory (Remember that HBM2 has not come out yet, but it will very soon with AMD Vega and NVIDIA Volta) and as you probably know the DDR5 memory is also under development. 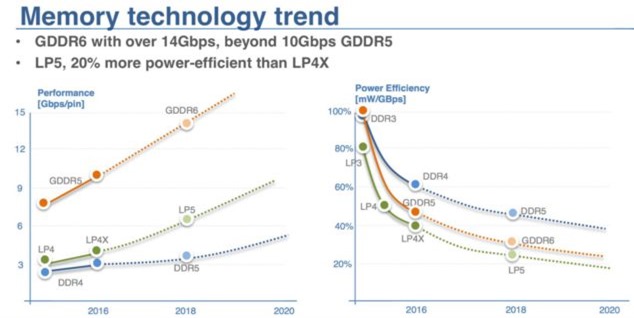 But now, what we’re here for. The HBM3 is the evolution of HBM2, which in turn evolved from the HBM which came as a substitute, not an evolution, of the GDDR5. Despite all this, after HBM memory, the GDDR5X was created as an in-between of both HBM and HBM2, or almost like a “while HBM2 arrives” memory. With HBM already on the market, GDDR5X established and HBM2 on the way, is GDDR6 memory really necessary?

But bandwidth apart, the greatest innovation this new type of memory will bring with it is LP4X, a method by which the memory controller will be able to maintain voltages proportional to clock speeds, reducing power consumption by up to 20% compared to the previous generation.

Lower consumption in something that consumes very little power, and a greater bandwidth that is already outdated before it even hits the market, perhaps I’m the one that’s wrong because if a company like Samsung is investing in its development there must be a something they know and we don’t.

Read More:
How Much VRAM Do I Need for Gaming
How much RAM do I need?