Apple’s only connected speaker is the HomePod (which makes up for Siri’s shortcomings with its excellent acoustic quality). Google, on the other hand, offers several such products geared to “Home” use, with names like Mini and Max. The largest of these products, the Google Home Max, is the one we will be discussing here.

Retailing for around 399$, this connected speaker was engineered to satisfy even the most demanding listeners. In other words… to make you forget about the mediocre acoustic performance of the Google Home (which retails for much less: 129 dollars). A world leader in wireless technology, Google is now seeking to validate its wireless connected speaker. And, after having spent a few weeks testing the Home Max, we have to say that it still has a lot of room left for improvement. 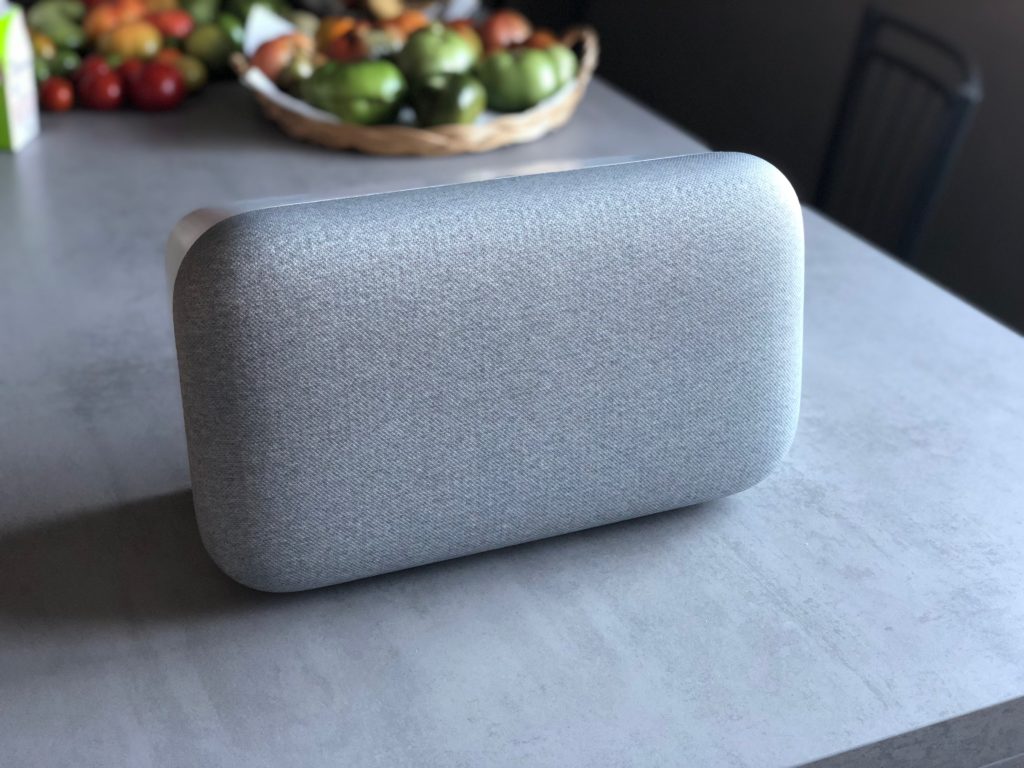 A connected speaker designed to fit in with a person’s interior decor should, above all, be aesthetically appealing. However, it would be fair to say that the Google Home Max is somewhat lacking in this respect. Very massive, the Google Home’s big brother is not very elegant: it resembles a large gray or black brick (your two color options) that sticks out when it is placed on top of a piece of furniture. At least the Home Max has very good finish quality (there’s nothing protruding from the speaker’s case); also noteworthy is its ability to be placed vertically in the manner of a bookshelf speaker. Google also supplies a small, magnetic silicone support to prevent the speaker from being in direct contact with the surface it is sitting on. 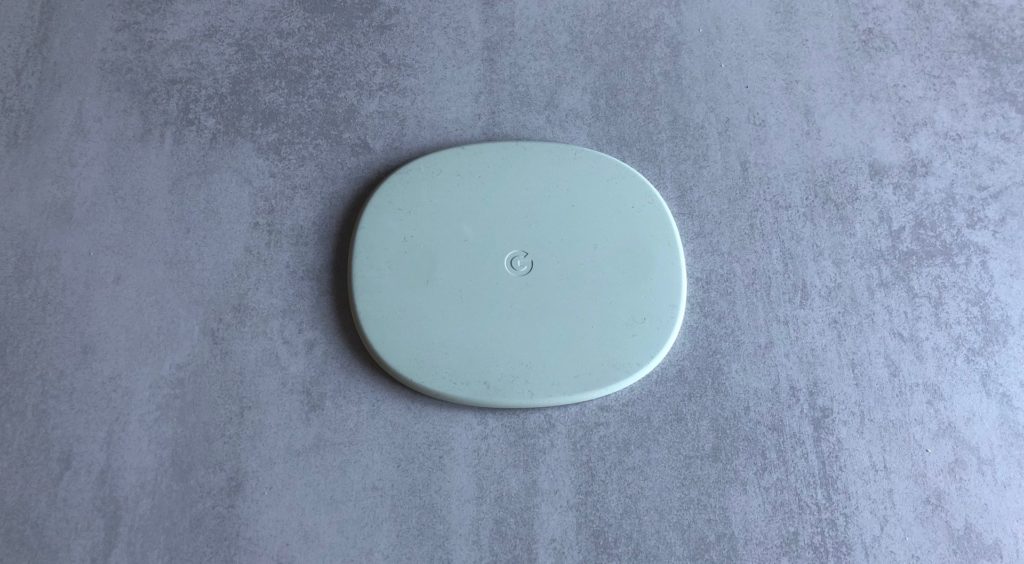 We did like this speaker’s front panel: it is covered with thin fabric that is translucent enough to allow the speaker’s four luminous indicators to show through when using the Google Assistant. Of course, the direction of these indicators will depend on the speaker’s orientation. At the top of the speaker (or on its side if it is being used vertically), can be found a tactile surface (distinguishable by its darker color) which will allow you to increase/decrease the speaker’s volume or pause audio playback. These controls work very well and can be used if you prefer not to make use of the speaker’s voice commands.

On the rear side can be found a button for disabling the speaker’s built-in microphone as well as a Jack connector and a USB-C port (used for recharging the battery). Despite not being very aesthetically appealing, from a technical standpoint, the Google Home Max doesn’t limit itself to the bare minimum – a point in its favor. 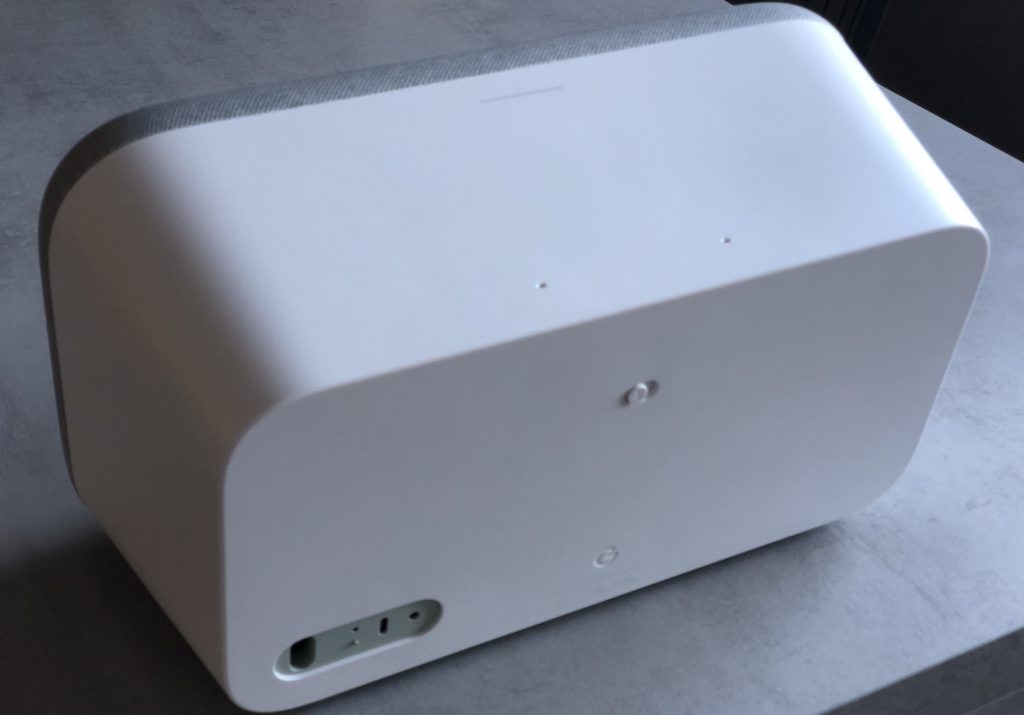 Advantages of the Google Home

We will not spend much time discussing the “Google Home” application available for iOS and Android which can be used for a step-by-step installation of the speaker as well as for fine-tuning it. However, while we are on the subject, it is worth mentioning that the Max functions pretty much in the same way as its predecessors and simply represents one more device in Google’s connected ecosystem. Google is a world leader in the domain of artificial intelligence and its AI systems dedicated to helping its users on a daily basis are among the most sophisticated on the market.

Google’s artificial intelligence systems are among the most sophisticated on the market.

The speaker’s AI system will be able to tell you what the weather will be like or about the latest news for example. You will also be able to ask it to play a music file or turn on the radio. The speaker’s AI system can also be used to play games or control compatible domestic devices. There is not much more to be said about the Google Home Max’s artificial intelligence except that it doesn’t do anything that the Home or Mini can’t do. Although the Max’s additional microphones allow it to do a better job of capturing your voice, its audio rendering does not live up to expectations.

Its audio rendering does not live up to expectations.

We were eager to test out the Google Home Max but we were almost immediately disappointed. A few seconds into the speaker’s “Welcome” speech and our ears were already complaining. Truth be told, it is rather difficult to assess the Home Max’s acoustic quality when it comes to playing music. However, one thing is for certain, this speaker is not well-balanced: at low volume (below 50%), music sounds very flat.

According to its technical datasheet, the Google Home Max contains two boomer speakers and two tweeters; as a result, we were expecting much more impressive audio quality. 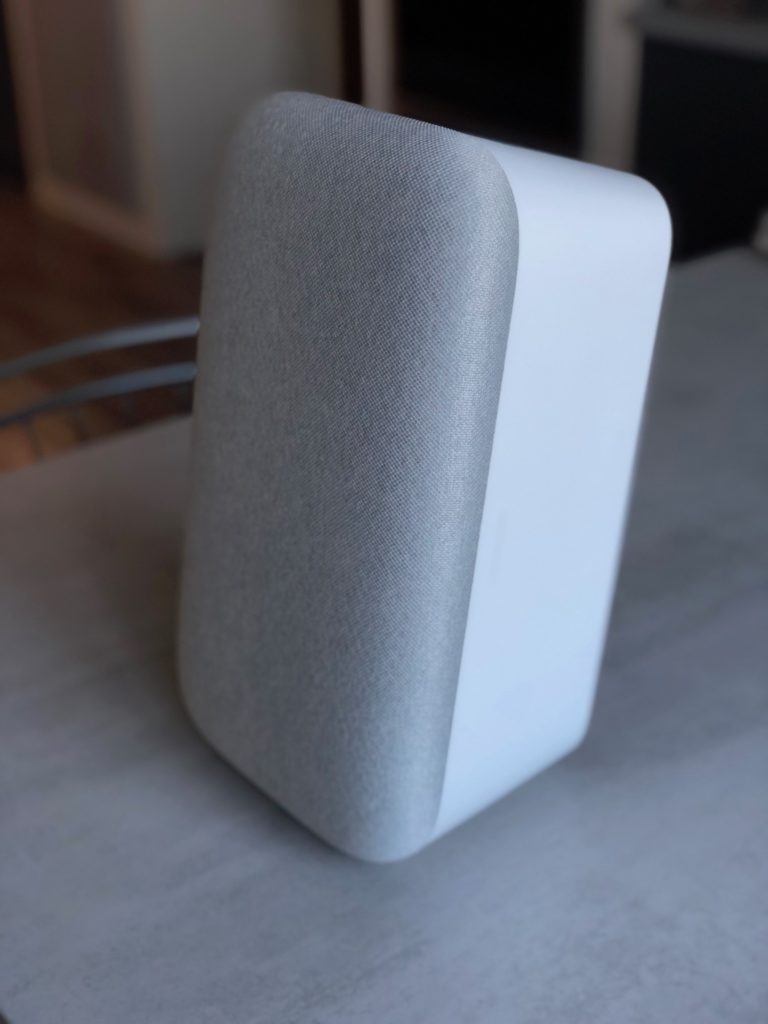 Above 50%, bass tones drown out the rest of the speaker’s sounds. In other words, the Max’s sound is not really enjoyable and it lacks precision and refinement. Basically, this speaker does not seem to be very suitable for playing music at all. We also had questions about the efficacy of this speaker’s software which is supposed to improve the Home Max’s acoustic output depending on the characteristics of the room in which it is placed.

On the plus side, it is worth mentioning that due to its intrinsic power, the Home Max is capable of filling a large room with sound. It must also be said that this speaker behaves a little better in its bookshelf configuration which is good news for anyone interested in pairing two of these speakers in a stereo setup (since we did not have two speakers at our disposal, we were unable to test this type of setup). However, doing so would be rather expensive since the Home Max retails for even more than Apple’s HomePod.

The Google Home Max attempts to compete with Apple’s HomePod which is renowned for its high-quality audio. However, Google’s best connected speaker seems to struggle in terms of its acoustic performance and given its high price, we would not necessarily recommend it to anyone interested in filling their living room with rich, high-quality sound.

The Google Home Max, which takes up quite a bit of room when placed on top of a piece of furniture, is not very elegant and rather disappointing in terms of its performance; it lags far behind the competition in terms of its audio quality. Powerful, but not very discrete, its only redeeming quality is its “Home” functionality. It looks like Google will have to come up with something better if it ever hopes to win over audiophiles.

What’s not so great