The easiest system to install and use, very good coverage and connection speed and much cheaper than alternative WiFi network systems.

The only requirements are a Google account, a mobile access point for installing and managing the system. Beyond that, there are few customizable settings or advanced features.

In short, if you need to extend your WiFi coverage within your home, the Google WiFi router is the best currently available solution.

The Google WiFi router is now available in France from 139 euros per unit. If you need to extend the WiFi coverage within your home, this is definitely the best option at the moment.

To install and use the router, you will need two things:

Contrary to most routers, this router does not have a web interface, and is exclusively controlled via the Google WiFi mobile application. Once installed, the device will remain permanently connected to Google. The California based tech giant claims not to collect any data linked to how the device is used. However, it does admit to collecting data concerning the hardware, the app and the network – although this data collection can be deactivated in the settings. 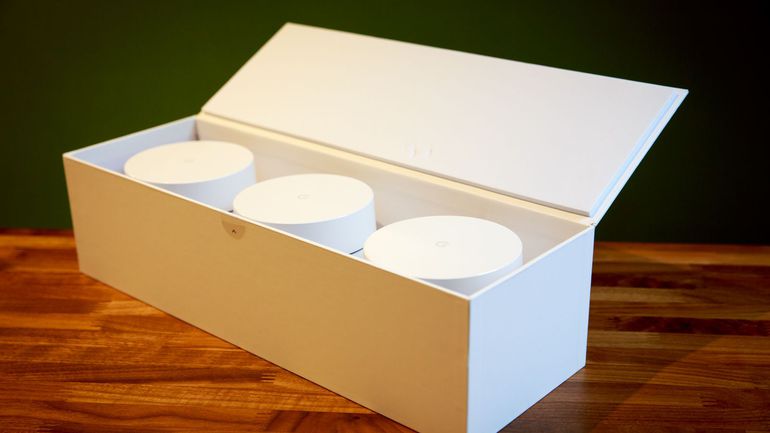 But, you should keep in mind that a constant connection to Google is required for this device to work – something that certain people will be unwilling to accept. There are a few other home network routers that do not require a connection to their manufacturer’s network such as Netgear’s Orbi for example.

The fact remains that most users will be willing to accommodate themselves to this condition, especially since it guarantees a certain measure of protection against attacks due to the periodic updates offered by Google. If you can live with this one condition, the Google WiFi router will offer you the best price, performance and ease of use of any currently available WiFi router. 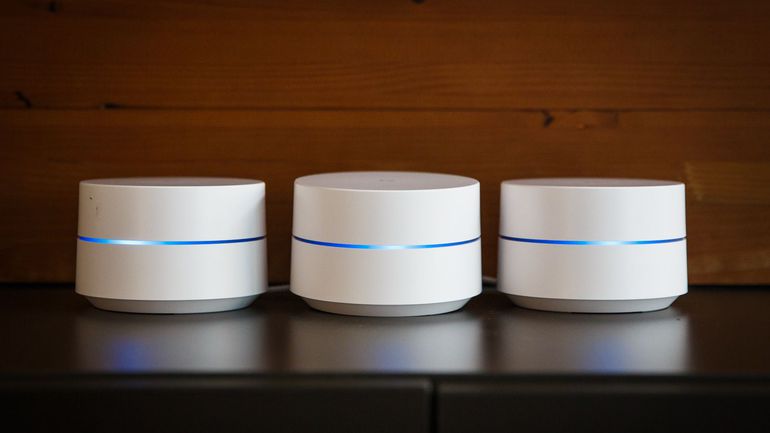 Nevertheless, you should be aware of the fact that each time that a WiFi signal is extended, it looses power, which translates into a loss of speed. This problem can be attenuated by placing the peripheral router in proximity to the primary router; the problem can be eliminated altogether by hooking these two devices up to each other by means of an ethernet cable.

The coverage and solidity of the network’s signal are excellent. We tested this device as a standalone router and in a configuration of three devices linked together. In both cases the Google WiFi router passed the 48 hour endurance test with flying colors. This test involved the transfer of a large volume of data between several terminals, namely four portable computers. The Google WiFi system did not undergo any disconnections during this period. The signal’s solidity was also very good and we were able to go from one access point to another without experiencing any interruptions. We tested this be placing a VoIP call and checking to see if we noticed any disruptions to the transmission.

Google claims that its system is constantly analyzing its environment in order to always choose the signal frequency which will ensure the best WiFi bandwidth – be it 5 or 2.4 GHz. We tested the system out in a home that had other routers in operation, and Google’s system did indeed prove to be very stable. 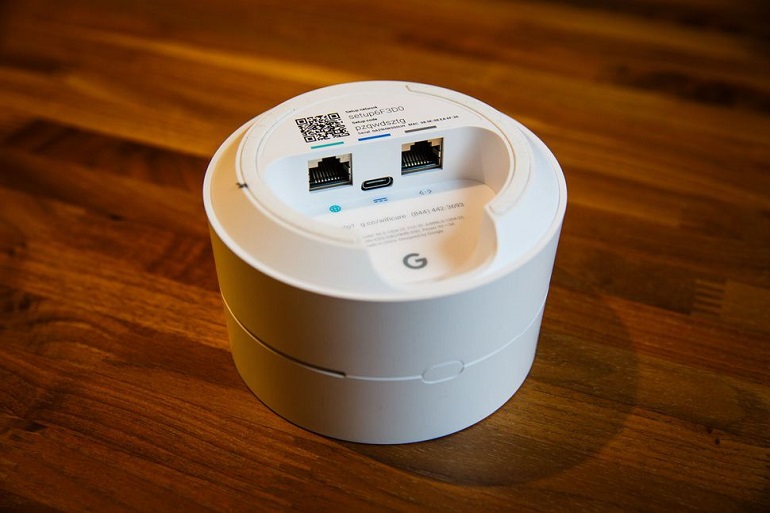 How does it work?

In many respects, this Google router is an evolution of the previous OnHub model. The main difference however is that this system is able to link up to three devices together. A single router is able to cover approximately 110 m² and three networked routers can therefore cover over 370 m². On its product description page, Google recommends using two devices for spaces which require a coverage zone of between 85 and 170 m².

All of Google’s routers are identical. When there is more than one router, one device is used as a primary router which is connected to the source, such as an internet box. The other routers are peripheral and can be placed anywhere within your home in order to extend WiFi signal coverage. Depending on the layout of your home, the distance between routers may need to be greater or smaller, and the application will help you determine the ideal placement of the peripheral routers by measuring the connection quality between devices.

It also displays the configuration of the home network’s devices in an easy to understand manner and makes it possible to change the priority of a particular terminal or to suspend internet access to one or several terminals. It is even possible to see to which router a given terminal is connected and to change a few parameters in order to create a guest access account, to do define the hours that children are allowed to use the internet, add a network administrator, etc.

What advanced users should know

Extending a WiFi signal wirelessly necessarily translates into a 50% loss of speed since the peripheral routers will need to perform two operations simultaneously: receive the WiFi signal and rebroadcast it. If you use two Google WiFi devices, terminals connected to the peripheral device will require more time to receive the same volume of data as terminals connected to the primary router.

This should not be much of a problem if you mainly surf the internet since the transfer speed of WiFi is usually significantly faster than the bandwidth of most high speed internet connections. However, if you plan of doing demanding activities like saving date or transferring files from one computer to another, then WiFi is probably not the best way to go.

The second frustrating thing about this system is does not have many customizable settings. The Google WiFi router does not have as many possible settings as a conventional router. There is no MAC filtering or DDNS support which is indispensable for creating a VPN server or for configuring remote access. We were not even able to change the default IP address. Therefore, people who are used to being able to customize their network settings will be disappointed. It is also worth mentioning that the Google router only has a single ethernet port, which may force you to purchase a network switch in addition to the router.

Who is the Google WiFi router geared towards? 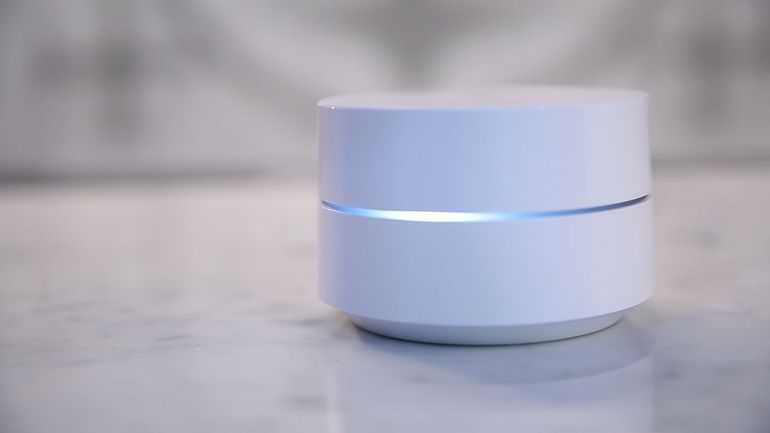 However, the Google WiFi router is probably not for you if:

Therefore, if you fall into the second category, you will probably be better off turning towards another device such as Netgear’s Orbi which will enable you to have control over your network’s advanced settings, but which will cost you more to purchase. Otherwise, you could choose a conventional router such as the Asus RT-AC88U which also has many more ethernet ports.