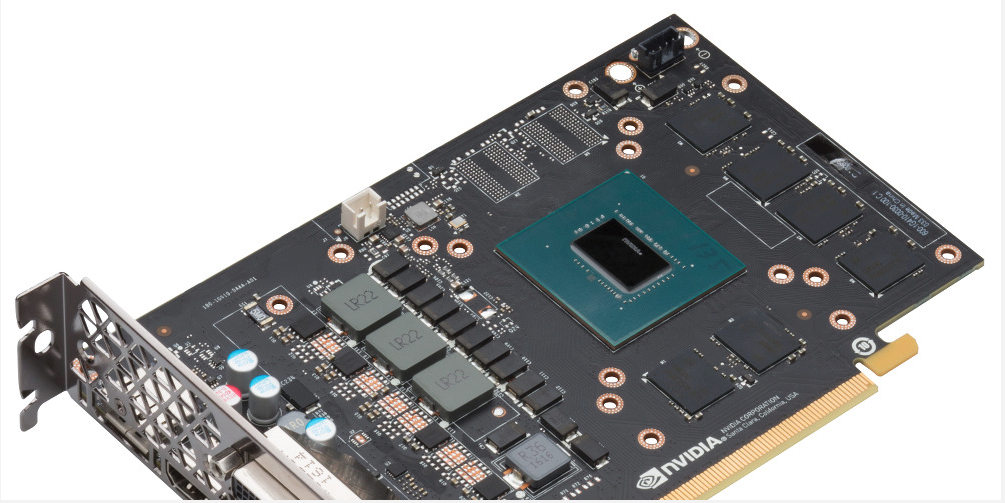 We will analyze how much memory a graphics card needs in order to play current and future titles with no problems. 4, 6, or 8 GB?

We will analyze how much memory a graphics card needs for both current and future games.

Buying a graphics card can be complicated, and the manufacturers often are partly to blame for using a nomenclature that can easily confuse those who are not initiated.

Which is most powerful, and NVIDIA 980 or 1050? You who read Omicrono frequently surely know that the first one is more powerful, but someone who doesn’t know anything about it will see that one has a number bigger than the other, and will come to the wrong conclusion. Believe me, it has happened more than once. 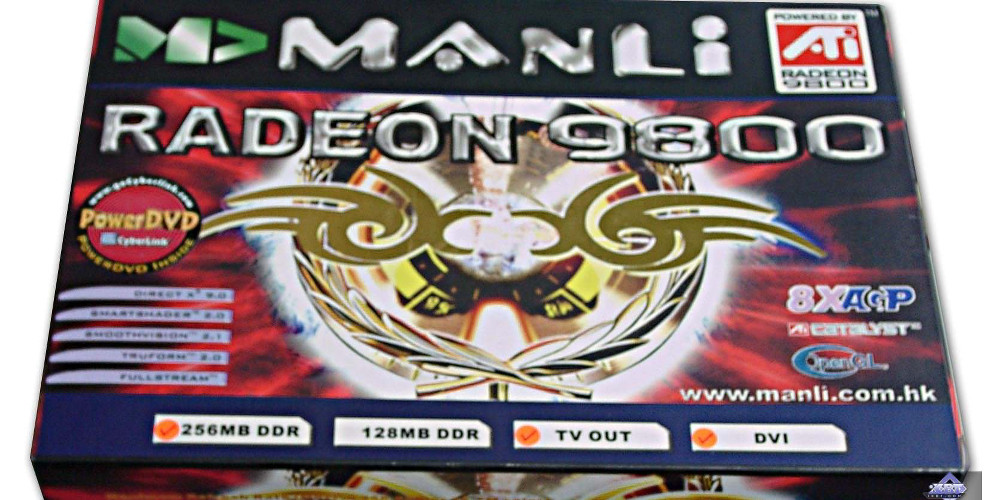 With memory, something similar happens; it’s a number, so our brains have learned that bigger is better. So we go to the store looking for cards that have the largest amount of memory possible, making bad decisions that will cost us more money in the future.

The manufactures themselves encourage this, often making the print that refers to the quantity of memory bigger than the rest of the print so it can be seen on the box from far away.

It’s true that currently these practices are falling into disuse, since these days users are somewhat better informed thanks to the Internet, but even so the memory continues to be a topic of discussion, and it is never clear how much is necessary.

It isn’t an unimportant aspect, since the memory is one of the pillars of the graphic card’s performance; it does no good to have a chip with several nuclei and the latest technology if it takes too long to access the needed data. But how much do we need?

Memory without potency does no good 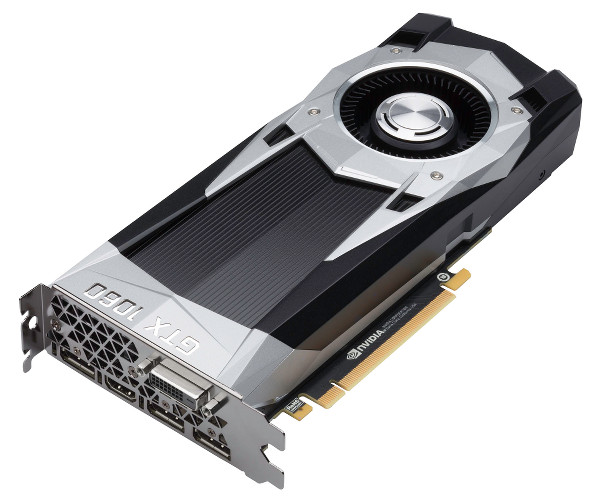 The shortest answer is: it depends on what you are going to do. Don’t shut the window yet, because now we will explain what the amount of memory you need depends on.

To start with, the most basic thing: in the graphics card memory are stored the textures, the geometry and other information from the scene to be rendered. Therefore, a logical relationship is that the higher the resolution, the greater quantity of memory is needed.

It’s not the same to render a game in 1080p and 4K, and in the second case we will need a lot more graphics memory. Does this mean that, when it comes to memory, it just needs to be big no matter what? No, because if we are talking about playing in 4K, there are other aspects that can cause a bottleneck, like the potency of the chip. 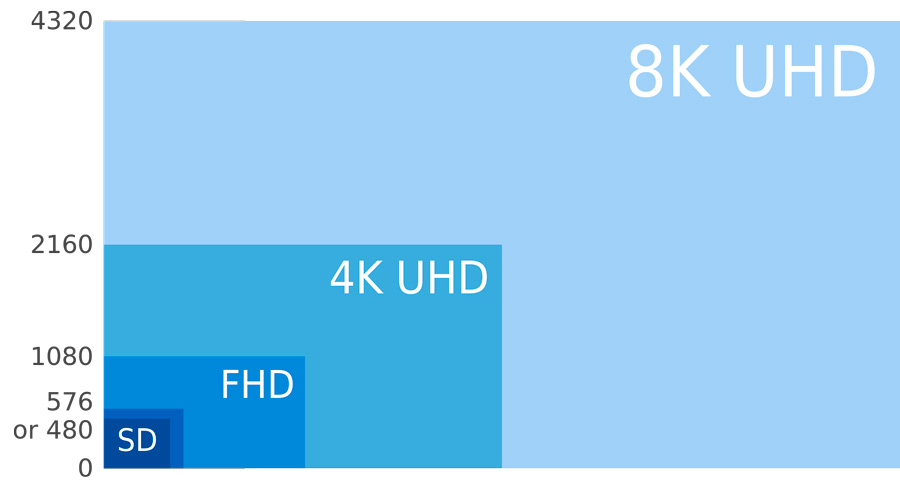 So before buying a graphics card with 8 GB to play on your monitor in 4K, you need to first look at the model of the chip you are using, even if you have been told that 8 GB is essential to play in 4K.

Currently, the consensus is that it is perfectly possible to play in 1080p with only 4 GB of graphics memory, while if we are going to jump to 4K we will need 8 GB minimum (although all the cards used to play at this resolution have at least that much memory).

Easy, right? Of course not, because the manufacturers would never be happy with something so simple, and these days choosing a memory size can mean losing performance.

Normally, a graphics card may have different versions with different amounts of memory, but since the chip is the same, the performance is practically identical in all of the versions.

This pattern has ended with this generation. Both AMD’s RX 480 and Nvidia’s GTX 1060 have two versions with different amounts of memory, but they are not equal, instead the versions with more memory offer better performance. 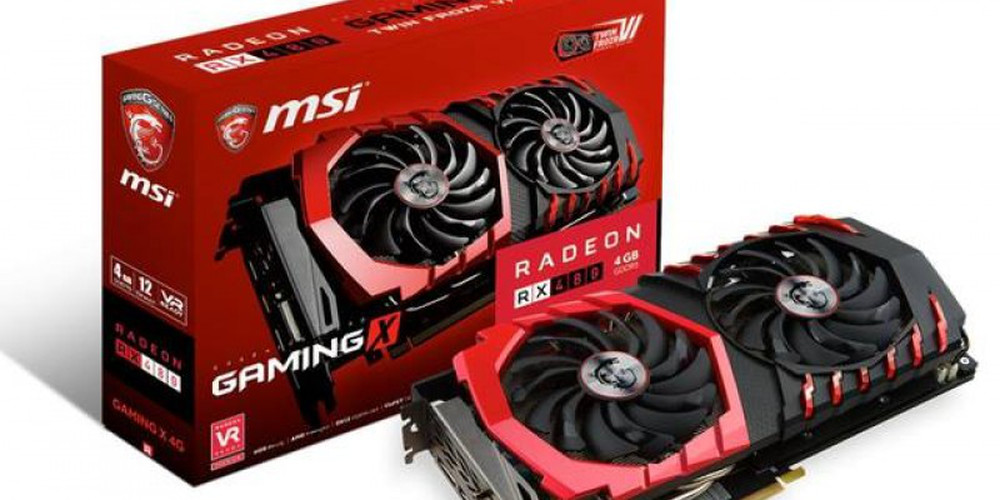 In the case of the RX 480, the 8 GB version and the 4 GB version are very similar, but not identical. The cheaper version not only has less memory, it is also slower: 7 GHz in the 4 GB model as compared to 8 GHz in the 8 GB model. The rest of the card is identical.

This implies that the available band width will be less and that can affect the performance. Clearly it isn’t a huge difference, just a few frames here and there in the games that demand the most memory, like the new Hitman. In Digital Foundry we can see the differences:

The difference is more drastic on the green side. The 3 GB GTX 1060 is cut down compared to the original 6 GB version; it uses the same chip based on Pascal, but it has less CUDA nuclei (1152 instead of 1280) and less texture units (72 instead of 80), although surprisingly the memory bus has not been touched. 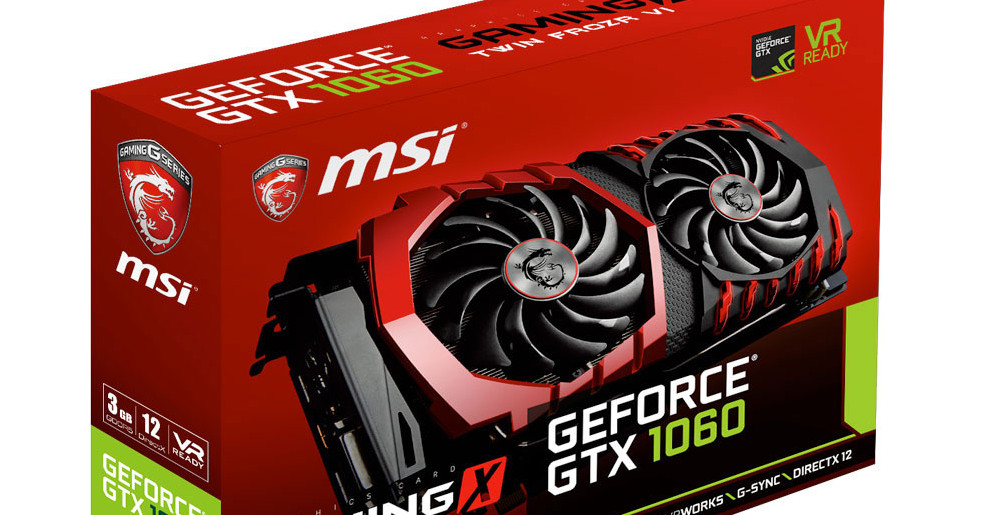 All of this means that the 3 GB GTX 1060 is a step down from the 6 GB version, with differences that can reach various frames per second in some games, as is pointed out again in Digital Foundry:

Looking for the quantity of memory that a graphics card needs 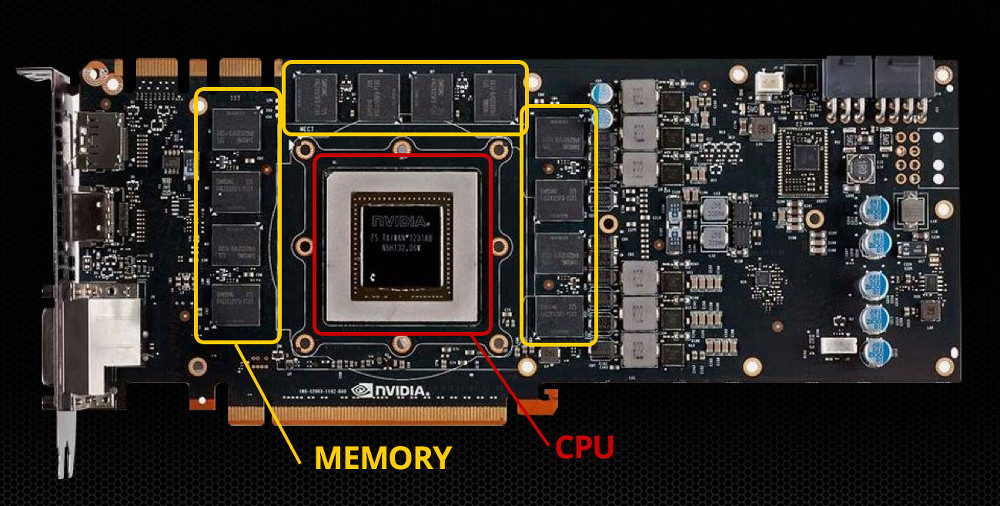 But how much memory is really needed these days? And what about in the future? In ComputerBase they have done a comparison which might interest us a lot, in which the graphics cards analyzed are those we just commented about, the 3 GB and 6 GB GTX 1060, and the 4 GB and 8 GB RX 480.

The tests centered on the time it takes for each frame to appear on the screen; instead of counting the frames per second, this method of analysis tells us if the game causes jerkiness, and more importantly, if the graphics card has problems accessing the memory or runs out of space. The tests were done in 1080p resolution.

The results speak for themselves (in the tables a lower value is better). That which interests us most are the “jaggies,” moments when the graphics card needs to move data because there was no more space for it in the memory, and therefore the frame was presented more slowly.

For a frame to take longer to appear is perfectly normal, it occurs in all graphics cards and tends to be a problem of the graphics engine; but when it happens often, it is a problem with the graphics card. The ideal would be to achieve graphics like those of Call of Duty Black Ops III with high-quality textures: small jumps, but nothing to worry about. 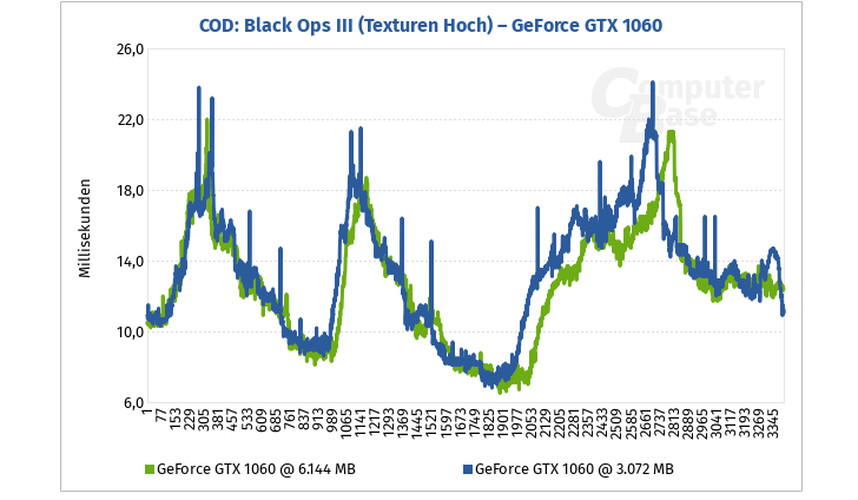 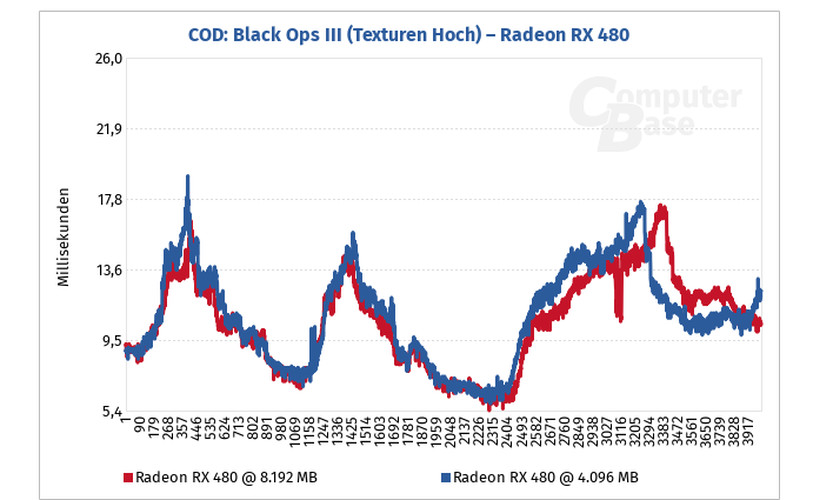 Next, observe what happens when we put the textures on “Extra.” The cards with less memory seem to take it, until a “jaggy” of some tenths of a millisecond appears; this is the moment in which its memory can’t give any more. 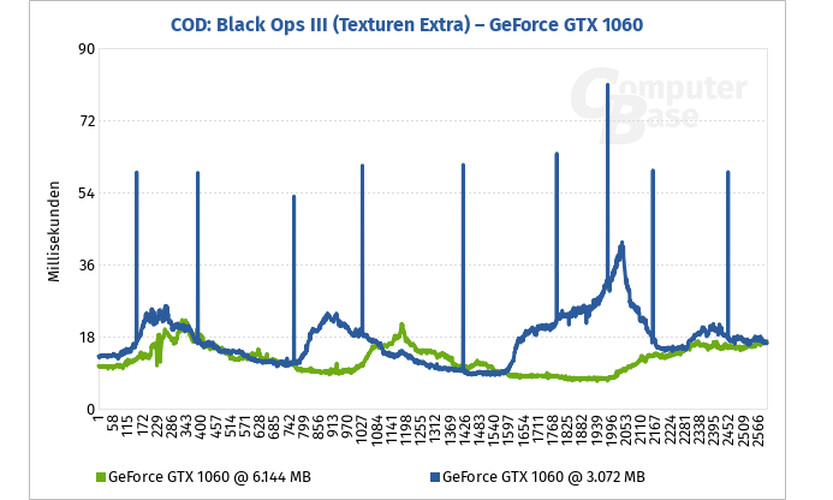 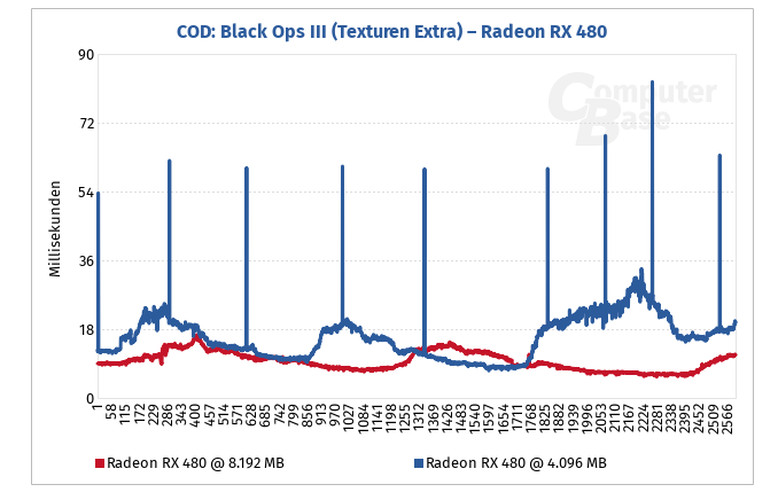 And this is in Black Ops III, which we could say is not the game with the most impressive of all graphics. Granted, it’s unlikely you’ll notice these “jaggies” unless they are produced continually, as happened with Mirror’s Edge Catalyst with the 3 GB GTX 1060. In this case, it is evident that 3 GB is not sufficient for the Frostbite 3 engine, which is also used by the epic Battlefield. 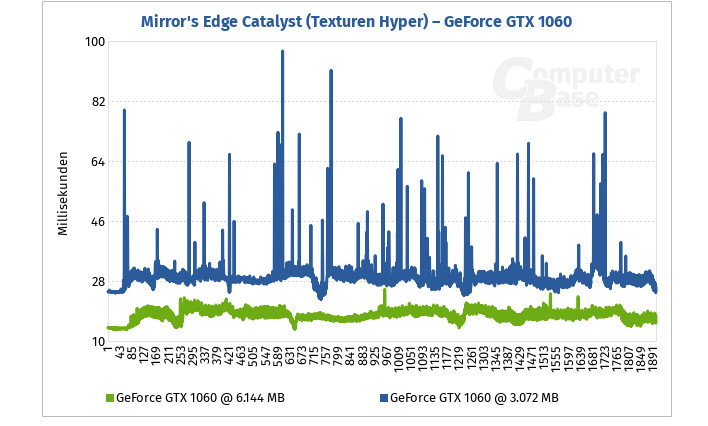 The tests even suggest that 6 GB may not be sufficient in order to achieve “Ultra” textures in some games, as demonstrated by Deus Ex Mankind Divided: 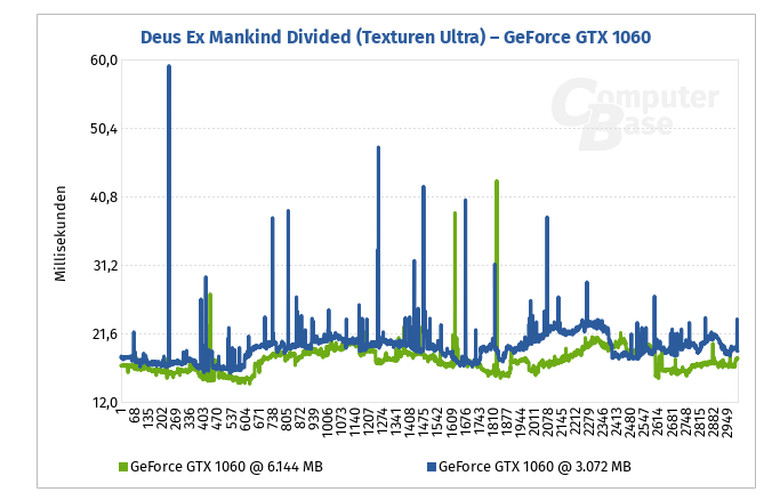 How much memory a graphics card needs

We come to the million dollar question. To respond to it, we don’t only have to keep in mind the quantity of memory, per se, but also the differences in the chips in each card. Although in both cases they are small differences, if you add them together you can find yourself with cards in two different worlds. 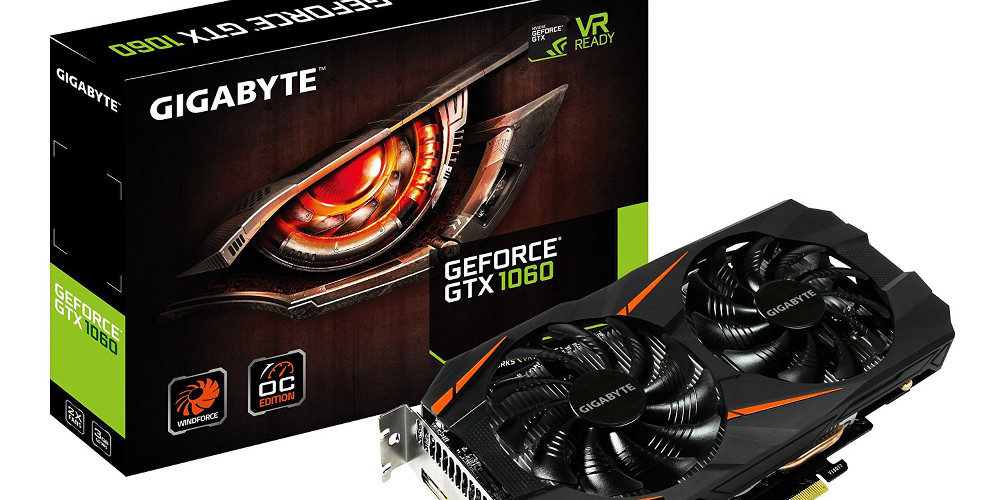 On the one hand, cards with 3 or 4GB of memory are only recommended if your priority is to save money in putting together a gaming computer. Something which I want to make clear is that the 4 GB RX 480 and the 3 GB GTX 1060 are still very capable alternatives which will allow you to reach 60 fps at 1080p in the great majority of current games.

The area of doubt is the future. The visual quality of games is always improving, and this is a tendency that will continue in multi-platform games thanks to fact that the new consoles like Playstation 4 Pro and Project Scorpio have as their goal games in 4K resolution (another thing is that Sony’s console doesn’t render them in this resolution). Textures now don’t only have to be acceptable in 1080p, but also in 4K, and that is a challenge.

If you are thinking about the near future, without a doubt you should choose a graphics card with 8 GB of memory. The 8 GB RX 480 or the 6 GB GTX 1060 are not only a little more powerful and will help you achieve a stable frame rate, they also have enough memory to activate the highest quality of textures possible at this time. 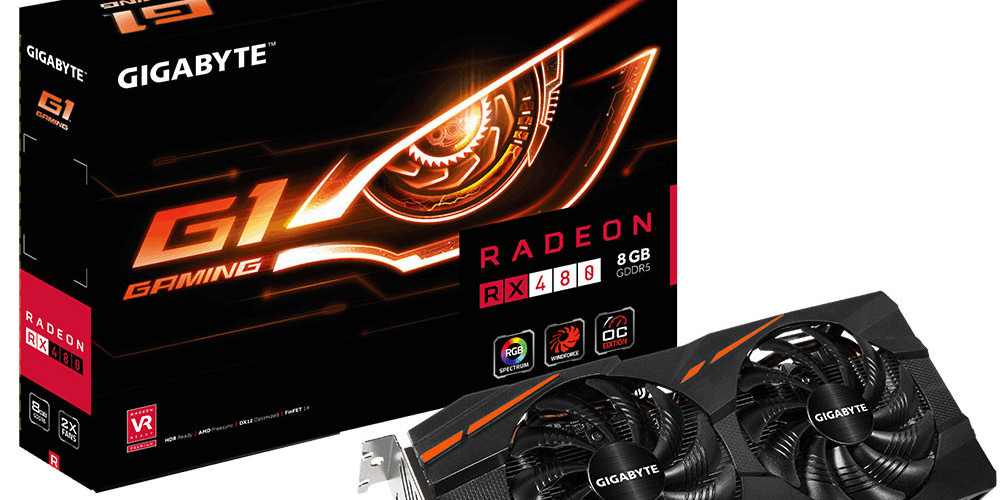 However, the great question in the 6 GB GTX 1060; Deus Ex Mankind Divided is only an exceptional case, but it might be an indication of what’s to come. NVIDIA’s decision to include a card with only 6 GB has made it cheap enough to compete directly against the RX 480, but the sacrifice has been great. How great is something we don’t yet know.

And if you are thinking of 4K, forget about these two cards, because your only option should be the GTX 1080 (or the Titan X if you have extra money), and this card now starts at 8 GB.

Are you thinking of upgrading the graphics card? What quantity of memory are you looking for?