How and why to install a VPN? 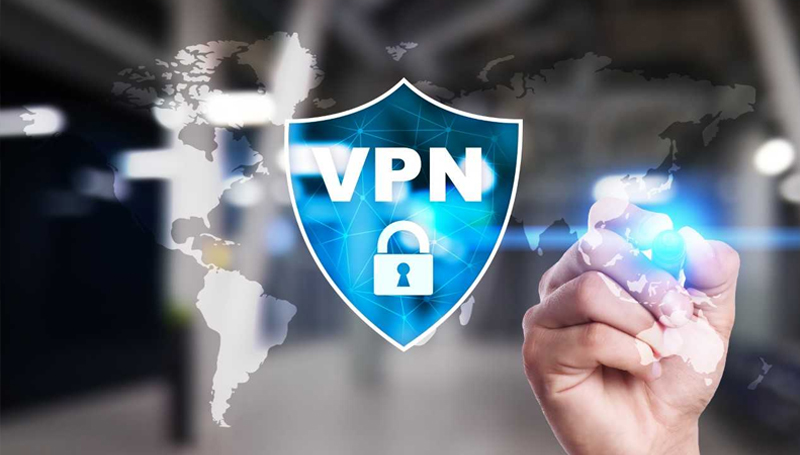 Very popular among people interested in surfing and downloading anonymously, VPNs are a good solution for securing computers, smartphones, and other connected devices. In the following paragraphs, you will find a basic overview of what VPNs are, as well as how to install and configure them.

What is a VPN?

VPN stands for Virtual Private Network. A VPN is a utility that makes it possible to surf the internet worry-free and completely anonymously (we will come back to this point later). Since VPNs ensure the complete anonymity of their users, they are very popular among people who download files illegally. However, VPNs can be useful for many other things as well.

When should you use a VPN?

First of all, a VPN can be used to protect a server from outside threats (a DDoS attack, for instance). A VPN can also be used for downloading files on a P2P network, as previously mentioned. Last, but not least, VPNs are used in certain parts of the world for watching TV programs and accessing prohibited sites or services.

A VPN creates a direct connection between two computers – “insulating” the traffic generated by a remote computer. This insulation will prevent your traffic from being intercepted and analyzed by unwanted parties and will provide you with a measure of protection against hackers (since there will be no direct interaction between your internet connection and other internet traffic). A VPN can be thought of as a tunnel whose walls will protect you from prying eyes and external threats as you travel from point A to B.

The other main advantage that VPNs have (which may explain why these networks have become so popular today) is that they “hide” a user’s real IP address. A VPN will provide you with a new IP address to use while you surf the internet, making it impossible for a server to know your true identity (the VPN service provider will be the only party to know your real IP address).

These days, VPNs are readily used by people interested in remaining anonymous while they surf the internet. A word of warning, however: certain websites, services, games, and applications may deny you access if they detect that your IP address matches one of the VPN servers they have on record. The way around this problem is to use a dedicated IP address (an address reserved to you) instead of an IP address which is shared with other VPN users.

There is something else you should be aware of concerning VPN usage: while it does not happen very often, if you download a file illegally, the RIAA or any other association for the defense of artists’ rights could launch a complaint against your VPN service provider. As a result, your VPN provider could turn against you and cut off your access to its service or even initiate legal proceedings against you. Although using a VPN is an excellent way to surf the internet anonymously, you shouldn’t be under the illusion that a VPN will provide you with total immunity against prosecution.

In summary, and to simplify things, there are three different types of VPN service:

So, which VPN should you choose?

There are dozens upon dozens of VPN service providers that offer an application that can be installed on your computer or mobile device. These VPNs range in price from 2 to 10€/month. In order to describe how to install this type of VPN, we will use NordVPN and VyprVPN as examples. We would like to make it clear that we are only using these VPN service providers as examples and do not necessarily recommend them over other providers. Nevertheless, the wide range of configuration options, high level of performance, and low price offered by both of these VPN providers do make them good choices. If you would like to learn more about the different VPN service providers currently available on the market and find out which one would best suit your needs, don’t hesitate to check out our VPN comparison.

Let’s begin by discussing NordVPN, which has over 4000 servers at its disposal throughout the world. NordVPN’s software can be used on Windows (7, 8 and 10), Linux, and macOS. It can also be used on Android, iOS, and Android TV devices. What’s more, this VPN can also be used via Chrome or Firefox by means of an extension. NordVPN’s service allows you to protect up to 6 devices simultaneously.

1.Navigate to NordVPN’s website in order to register (you will need to provide your credit card number). Once registered, download the application or extension for the device you would like to protect from this page: https://nordvpn.com/fr/download. The application will suggest that you activate a feature called CyberSec, which will protect you against eventual malware, invasive advertisements or phishing attempts which could compromise your computer. You should accept and activate this feature since it doesn’t cost you anything and since you can always deactivate it later. 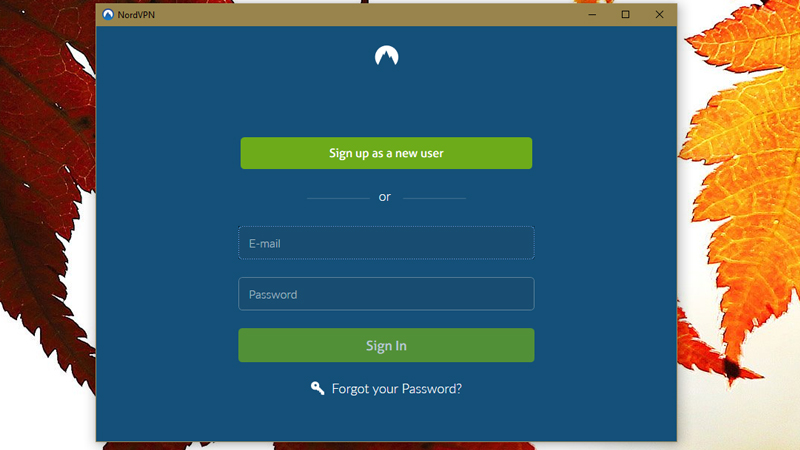 2.The next window offers you a choice: you can either select a server by using the on-screen map or by going through a list of countries by clicking on “Countries”. We prefer to use the second option since it allows for more control over the server selection process. The rest is pretty straightforward: if you would like to “simulate” being in France, click on the French flag, if you would like an IP address in the United States, click on the US flag, etc. 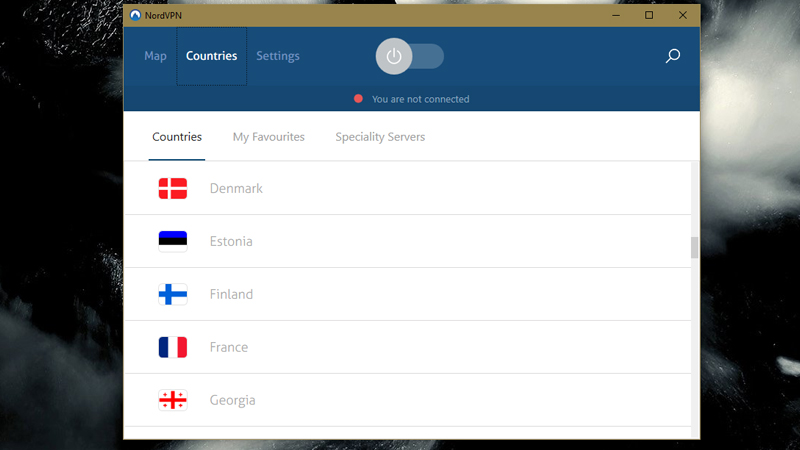 3. By default, the VPN service will select the server with the lowest user load. In order to view server load (calculated in percentage – the lower the better), click on the little icon located next to each country. Once the list of servers has loaded, you will be able to select a different server from the one suggested by default.

NordVPN also has servers reserved for using peer-to-peer services. In order to access these servers, click on Countries > Speciality Servers > P2P. Here too, you will be able to select a server based on its load. However, you will notice that most of the VPN servers dedicated to P2P have a much higher user load than the servers appearing on the Countries tab – proof that NordVPN is highly solicited by P2P users. 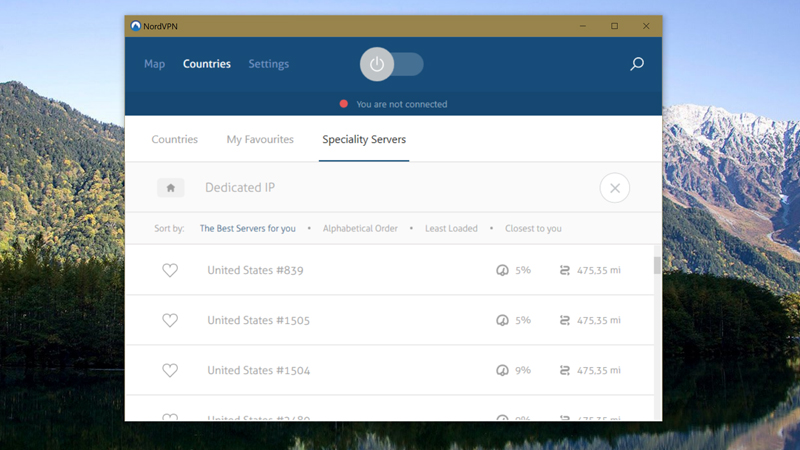 4. What about using NordVPN on your smartphone? As far as their interface is concerned, NordVPN’s Android and iOS applications closely resemble the PC version of the software. There is good news for “anglophobes” too, almost all of this software’s text is available in French. By pressing the Quick Connect button, the application will automatically connect you to a VPN server in France (if you are located in France that is). Like the “Countries” button on the PC application, the “Parcourir les serveurs” button will allow you to: select the location of your VPN server, select a P2P server, access the Dedicated VPN option (dedicated IP as opposed to a shared IP for gaining access to networks with a strict IP protocol), etc. 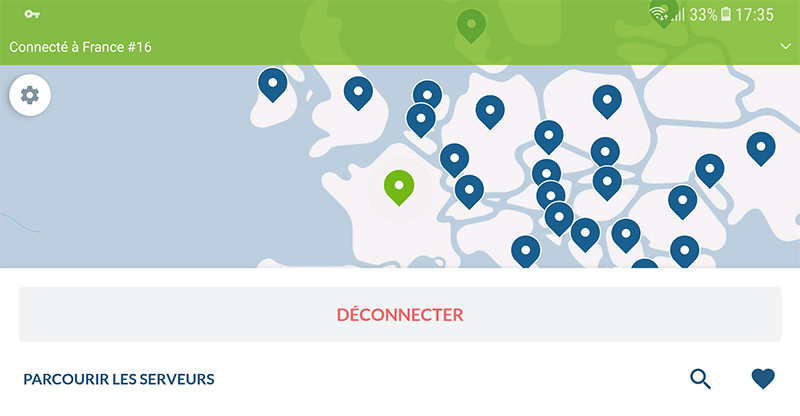 VyprnVPN is also available for various platforms: Windows, macOS, Android, iOS… It can even be used with Qnap brand NAS devices, with Android TVs or as a router application.

1.Navigate to https://www.goldenfrog.com/fr/vyprvpn/vpn-apps and download the version corresponding to your device. Don’t forget to register while you are at it (this service will cost you 3.96€/month for 3 simultaneous connections or 5.42€/month for 5 connections plus access to the VyprVPN Cloud and Chameleon protocol features). It is worth noting that you can try out all of this provider’s various services for 3 days without spending a dime. 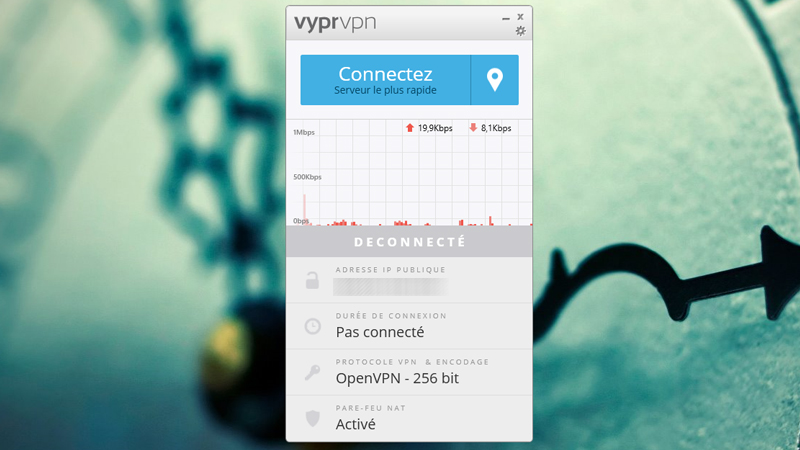 2.Once you have installed the software, launch it; a button will offer to immediately connect you to the fastest available server. While NordVPN connects you to the server with the fewest users, VyprVPN will connect you to the server with the lowest ping. As a result, the best available server will not necessarily be located in your country. If you would prefer to select a server based on its geographical location (in order to obtain an IP address from a specific country), click on the localization icon next to the word “Connect”. Next, click on the “Show All Sever Locations” option. 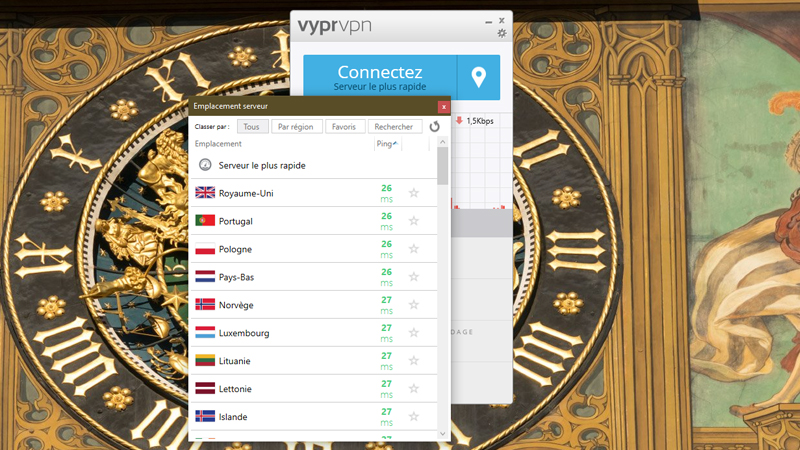 3.In order to connect to a VPN server, simply double-click on it. VyprVPN has a little under 100 servers at its disposal; while this may not seem like very many, VyprVPN’s servers are located in a wide range of different countries. Moreover, since VyprVPN provides a much more confidential service than NordVPN, we have never been denied access by a server because of a “banned IP” while using VyprVPN.

Finally, if you decide to go with VyprVPN’s Premium package, you will have access to other features such as the Chameleon protocol which can be activated via the gear icon located at the top of the application’s main interface or via its Options menu (you will find the Chameleon option in the Protocol section). What is this option? The Chameleon protocol offers to hide your activity from servers that analyze traffic in order to detect VPN users; it randomly searches for open ports in order to prevent your traffic from being blocked in certain countries or to prevent your bandwidth from being capped. 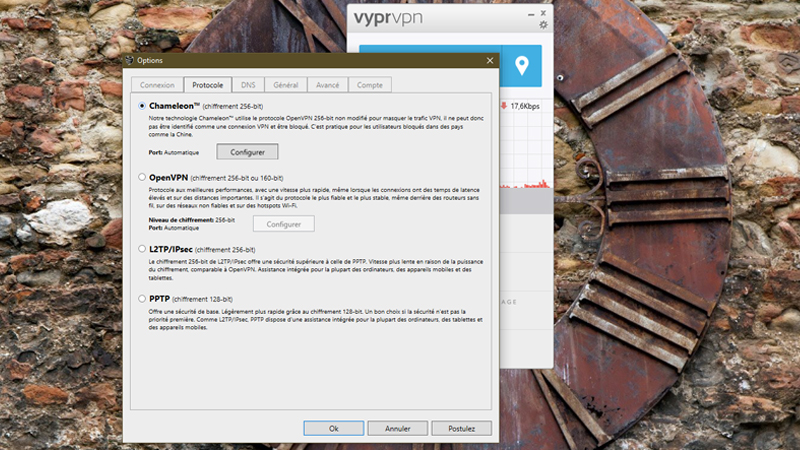