How many times have I told you? Photos you take with your smartphone should not stay on the phone’s memory: you need to transfer them regularly to your PC and back them up on HDDs and memory cards.

But you did not listen, and now you find yourself with a dozen photos you liked very much simply vanished into thin air. What are you saying? Are you blaming some app that promised to delete useless files and picture duplicates? It does not matter.

The damage is done and now you have to try to fix it. Roll up your sleeves right away and find out how to recover Android photos thanks to the apps I am going to recommend you in the following paragraphs; with a bit of luck you will be able to recover all the lost shots.

Two important premises, before you put yourself at work: the apps I am going to tell you about need root access to your phone. Rooting is a procedure by which the user bypasses standard Android restrictions in order to run apps that need access to deeper areas of the OS. (Read More: How to root android phone)

Another important thing to know is that… you cannot make miracles! If the areas of your phone’s memory on which your photos where saved have been unfortunately overwritten by other pieces of data, then there is nothing any app can do to get your shots back. Is that clear? Good, let us get to work then! 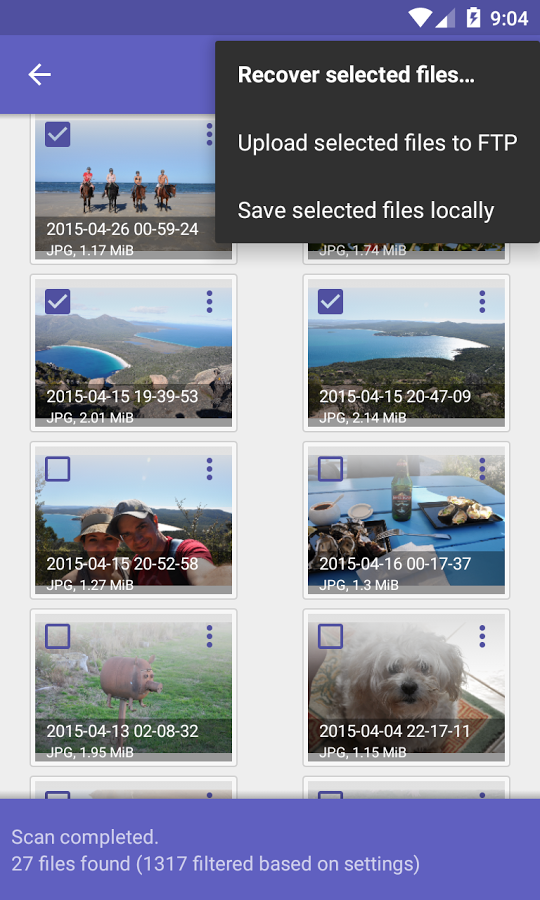 DiskDigger is one of the best free apps to recover Android photos. It is packed with an intuitive UI and it is reasonably fast.

After installing it on your smartphone (or tablet), launch it and tap on Allow to make it to run with root access. After that, answer No, thanks when asked if you want to buy the Pro version of the app (which allows you to recover all kinds of files and is not restricted to pictures) and select the drive from which you want to recover your photos: it will (probably) be the one with the greatest capacity and the name in bold.

Then tick the JPG option and tap on OK to start the drive scan. As DiskDigger keeps scanning you will see the thumbnails of the recoverable photos appear on your screen. Put a check mark on the ones you want to recover, tap on the floppy disk on the top right corner, and select Save selected files locally to complete the process.

If you want to recover your screenshots in addition to your regular photos, tick the PNG option (as well as the JPG option) on the opening screen (initial setup) of the app. 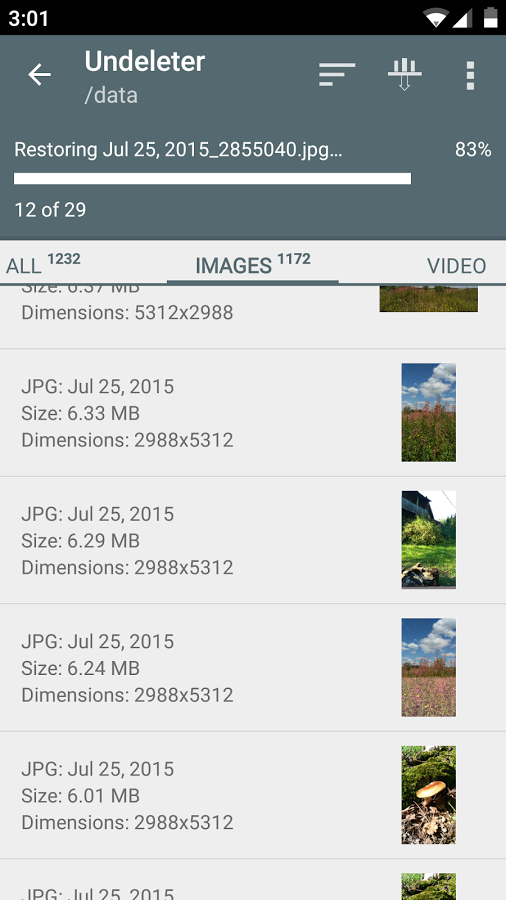 If DiskDigger could not retrieve all the pictures you cared about, you can try with Undeleter, which is a bit slower but does an equally good job. The basic version of Undeleter is free and lets you recover photos only. The full version – available for €3.99 – allows you to recover documents, archives and other file types (on top of pictures).

After downloading Undeleter on your Android device, launch it and tap on Next > Allow to allow it root access. After you are done, tap again on Next and select the drive from which you want to recover your photos (e.g. Internal Storage). Then choose the types of files you want to restore (JPG and PNG), and tap on Scan to start recovering your photos.

As the app keeps scanning your device you will see the thumbnails of the recoverable photos automatically appear on your screen. To recover an image, go on its preview, then tap on Menu (the three dots icon in the top right corner of the screen) and select Save the file from the drop-down list.

If your Android device supports microSDs, you can remove the memory card from your device and analyse its contents on a PC to try to recover lost photos.

1 thought on “How to recover Android photos Free”