Today Intel is launching its new line of desktop Core processors – the so called “7th generation” Kaby Lake line. As we have previously mentioned, the innovations in CPU technology offered by these new chips are pretty limited, the major innovation is their increased operating frequency. 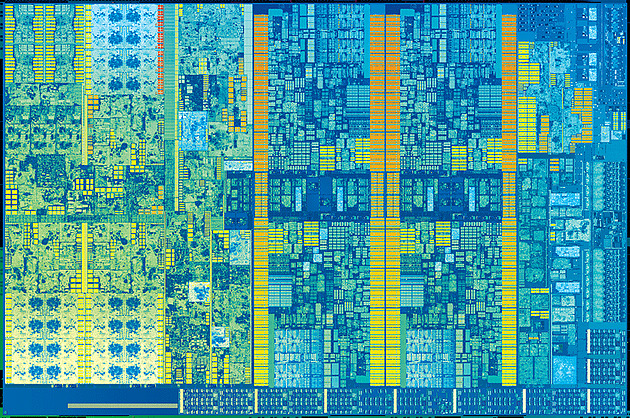 The Core i5 and Core i7 Kaby Lake range is composed of:

Compared to the previous line of processors, we can see an increase in operating frequency of between 200 and 300 MHz thanks to the “14nm+” technology Intel has incorporated into the new chips and all for the same price as the older generation. For all practical purposes however, due to the novelty factor and the absence of non-official suppliers, we can expect a temporarily increased retail price. It should be noted that these processors officially support DDR4-2400 RAM whereas the previous generation is limited to DDR4-2133, except when overclocking with the Z chipset – in which case they easily exceed DDR4-3000.

At equal frequency, their performance is the same as that of the Skylake processors. Kaby Lake processors are supposed to work with all motherboards, but older boards will require the newest BIOS upgrade in order for the system to boot. Because of this, it may be preferable to choose a motherboard equipped with the Series 200 chipset (Z270, H270, B250) to be sure to have the most up-to-date BIOS. Another option would be to opt for a motherboard which allows the BIOS to be flashed without a CPU being on-board.

We would just like to remind you that the main functional innovation of these processors is in their iGPU decoding of the 4K HEVC 10-bit and VP9 data streams. With this improvement, Intel has put its iGPUs at the same level as the most modern GPUs from AMD and Nvidia.

For this review we were able to get our hands on the retail versions of an i5-7600K and an i7-7700K. As anticipated, a BIOS update was required on our ASUS Z170-A motherboard, without which the system would not boot.

On the basis of their specifications, we were expecting a frequency boost of between 200 and 300 MHz. In reality, it turns out that under heavy load, the Turbo feature activated on the 4 cores gave us a 400 MHz improvement:

Given the absence of any gain in IPC and seeing as we have been overhauling our CPU test in anticipation of the arrival of the new Zen product line, we were unable to put these processors through all the paces of our usual test protocol. That being said, in terms of performance, we found a gain in frequency similar to the one measured by Fritz Chess Benchmark: 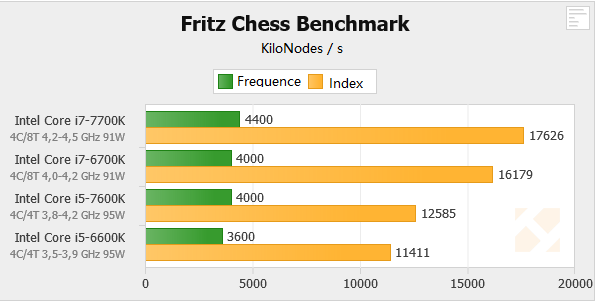 As you can probably understand, we wanted to see just how high in frequency we could get these processors to go. After a measurement at their default setting, we looked for their lowest operating voltage at 4.5 GHz – proceeding by increments of 0.05V. We then increasing the frequency while keeping to a maximum voltage of 1.35V which seemed to us to be the safe limit for long-term use. The stability of the processor was checked with the help of Prime95 and FFT 256K during a time span of 15 minutes. The reported temperature was taken as the average of that of the 4 cores during the last minute of the test. The test was conducted in an open-air environment with an ambient temperature of 25°C and the CPUs were cooled by a Noctua NH-U12P SE2. 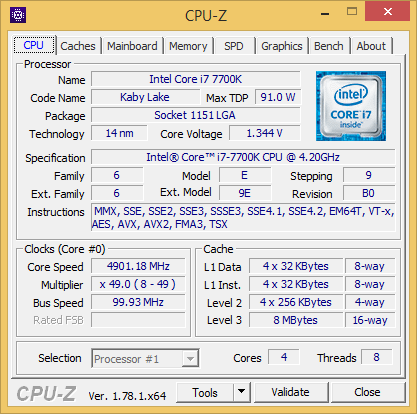 We started by testing the Core i7-7700K which was able to operate at 4.5 GHz with 1.15V which is not bad since the i7-6700K required an operating voltage of 1.25V at the same frequency! It was stable at 4.8 GHz with 1.25V but an additional 0.1V was required to reach 100MHz more. We were unable to achieve stability at the rumored 5.0 GHz possible operating frequency. 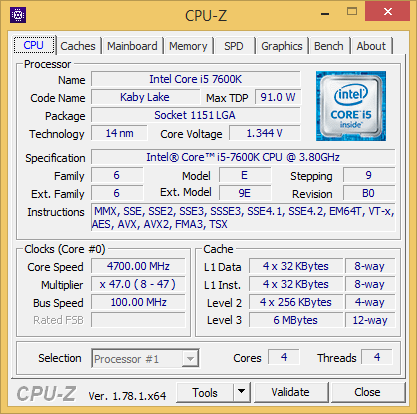 For the i5-7600K, the frequency of 4.5 GHz was attained with 1.2V consumption which is again better than its predecessor, the i5-6600K, which required 1.3V. The increase in frequency was however far less good and to reach 4.7 GHz it required 1.35V and we were unable to reach stability at all at 4.8 GHz.

Overclocking is by its very nature is a somewhat random process as was demonstrated by this test. While the i5-7600K doesn’t provide any significant improvement over a “good” Skylake processor, the frequency achieved by the i7-7700K was significantly improved. We should mention that we had the impression that at the same power consumption the temperatures generated by the Kaby Lake processors were slightly higher than those generated by their Skylake counterparts. This leads us to believe that the contact with the IHS has not been improved and has probably gotten worse in the new generation. Even if this should not present a problem at reasonable operating voltages, it is a shame that Intel has not paid closer attention to this aspect in their K product line.

17 months after the release of the Skylake CPUs, the launch of the Kaby Lake line is somewhat tainted. While it is true that Intel is offering a product which provides slightly better performance at no extra cost – which is always nice, it seems that the marketing campaign surrounding the “7th generation” line of products has been blown out of proportion since this line does not seem to qualify as an entirely new generation of technology.

If we overlook this fact, Kaby Lake processors should be as good a choice as their predecessors have been, if not a slightly better one, that is to say once the prices truly come in line with those of the Skylake line – which might take a few weeks. But, as is always true with computer technology, a newer generation is never far away and the Zen line is just around the corner!