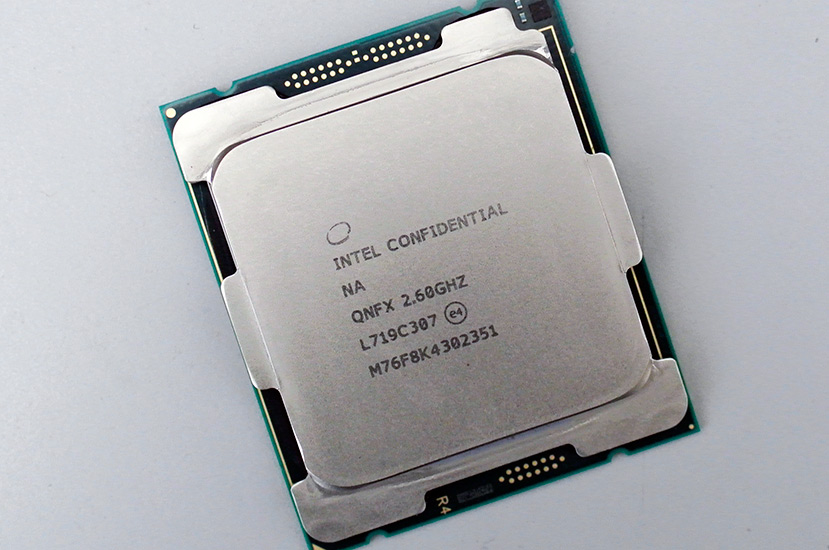 This is a processor rocking several cores that can be perfectly exploited by any modern OS, including almost any recent Linux distribution, as they also have kernels in order to take advantage of the processor’s features, just like Windows 10 does even with its Home versions.

These processors have a direct rival among AMD’s Threadripper lineup (which has turned out to be a new AMD lineup with great potential), but they have weapons to defend themselves and outshine AMD, even if it means being quite pricier.

All of these new models keep having a quad-channel DDR4 memory featuring a 256-bit bandwidth and a maximum storage capacity of up to 128 GB. These memories are capable of providing more than 60 GB/s of real bandwidth while also offering support for high-speed memories that improve this figure significantly. Moreover, they have to compete with the quad-channel memory rocked by AMD’s Threadripper, which also happens to offer great support for high-speed memories achieving a very similar bandwidth potential. 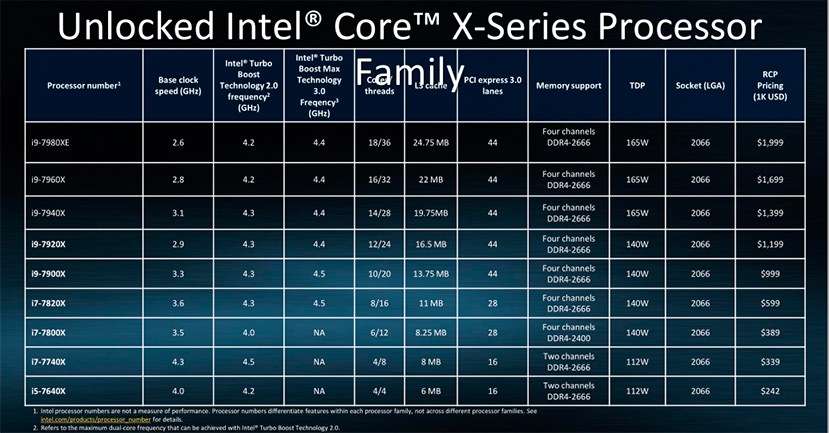 The entire Core i9 lineup also has great potential in terms of connectivity thanks to its 44 PCIe 3.0 lanes and the great possibilities offered by the X299 chipset that supports them. AMD’s Threadripper has 64 PCIe lanes (although its chipset with fewer lanes is almost on par with Intel’s platform) and adds native support for technologies such as USB 3.1 Gen 2 (10 Gbps).

All of these new models offer an architecture optimized for the business market and a cache completely redesigned for demanding environments that include datacenters, but they are also the right fit for the domestic market. For example, these are processors that support overclocking via the unlocked multiplier, which is something that the users with the money to buy them will certainly be grateful for. 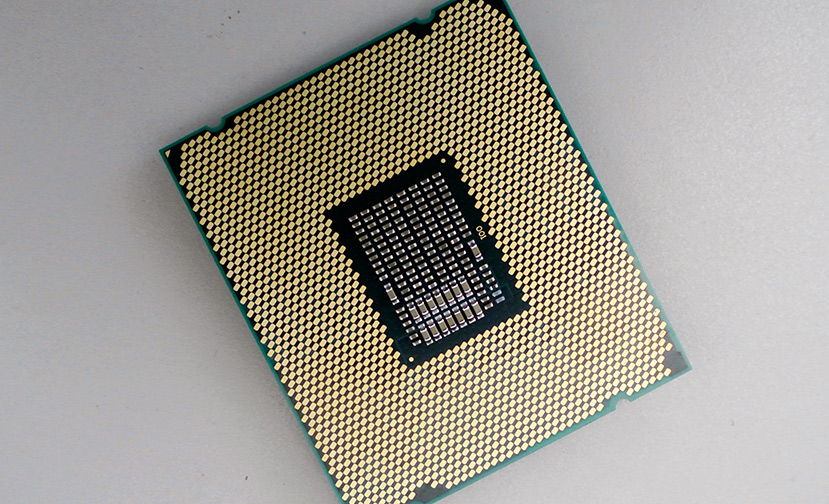 These new processors feature technologies such as the new Turbo Boost 3.0, which has nothing to do with the processor’s overclocking capabilities but with taking advantage of its turbo bin specifications to boost the processor’s best cores when necessary, especially when the rest of them are not required. This allows the processor to increase its frequency to peaks of 4.4 GHz in up to two of its cores without affecting the warranty or its TDP, which will always remain at a maximum of 165 W.

The least-expensive Core i9 Skylake-X generation is the 10-core, 20-thread Core i9-7900X at a price close to €1,090, including taxes; the Core i9-7980XE costs more than €2,200. Their 16-core competition is around €1,100, which is certainly a high price for a processor, but a very competitive one compared to the prices of these new Intel processors.

This chipset and the new X-Series processors make up Intel’s new Halo platform. These two elements allow access to cutting-edge overclocking technologies, such as Intel’s Turbo Boost 3.0 system, which allows us to control each core’s frequency better and manage both power consumption and heat generation in order to constantly achieve higher frequencies in several cores. 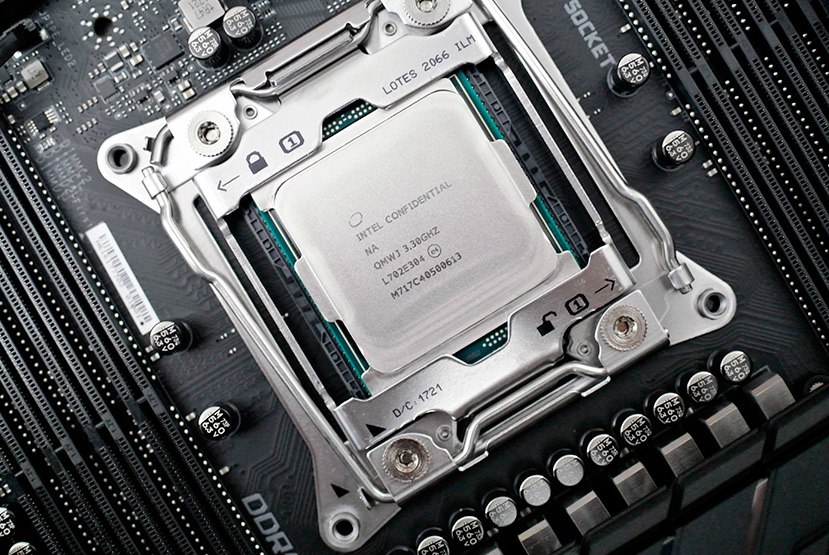 This chipset is oriented towards gamers and overclockers, allowing each important frequency of the system to be totally independent, and adding support for faster memories thanks to Intel’s XMP profiles system. There still is support for the Extreme Tuning Utility application and a protection system called Performance Tuning Protection Plan is introduced so that we can safely mess around with our system and processor’s capabilities.

The X299 is an excellent chipset that will allow a better integration thanks to its greater number of PCIe lanes. It supports up to 24 PCIe 3.0 (8 GT/s) lanes, which is a more than substantial improvement over the 8 PCIe 2.0 (4 GT/s) lanes offered by the X99 chipset. This already is a very important improvement that will allow these motherboards to offer a last-gen storage capacity alongside support for more advanced graphics systems. 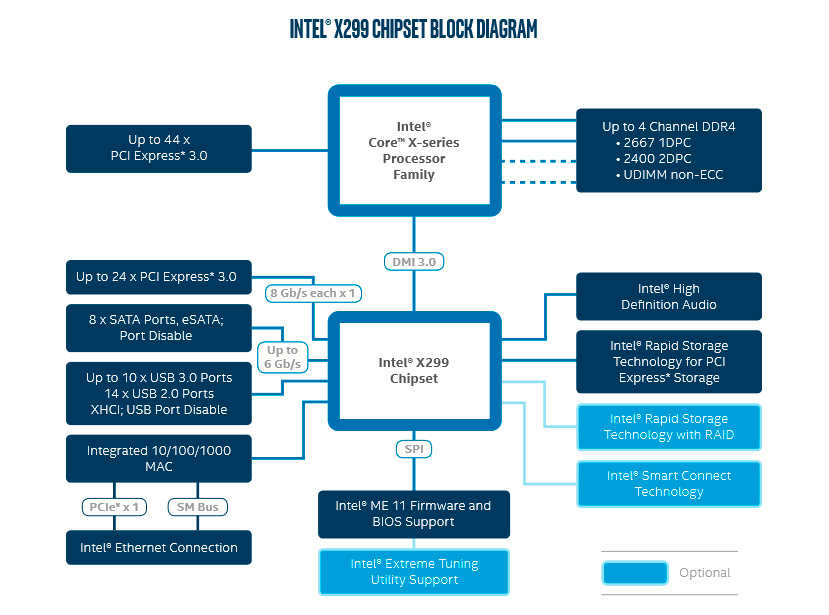 If we add this amount of lanes to the 44 offered by these processors, we would have a total of 68 PCIe lanes, four more than AMD’s Threadripper, but the connectivity of the chipset’s 24 lanes has to go through a PCIe 3.0 4x bandwidth that connects the Intel processor to the X299 chipset. To be honest, there should not be a functional difference between the two architectures, as both of them are excellent in terms of connectivity.

The chipset also supports storage systems such as M.2, U.2, NVMe, Intel Optane, RAID and up to 8 SATA 6 Gbps ports. This translates into great capabilities with a wide range of technologies that will allow us to enjoy the most powerful current storage units, with support on the long run for even faster drives that we will be able to configure in RAID 0 modes.

The chipset’s connectivity offers pretty much everything that we might need, with a total of 10 USB 3.1 Gen 1 (5 Gbps) ports to which we can add up to 14 additional USB ports, though with a USB 2.0 interface. We certainly miss the support for USB 3.1 Gen 2 (10 Gbps), but it will be unusual for a motherboard not to integrate this technology in any way, as this chipset can handle a great amount of PCIe lanes.

Other features of Skylake-X

These Intel processors inherit the advances that the brand has introduced in some of its best Xeon processors aimed for workstations and servers. We can see these improvements on important elements such as the AVX units that are now combined into a single one with a 512-bit bandwidth. On these units we also get extended instructions such as support for HPC applications, new scalar operations, and SSE and AVX instructions. 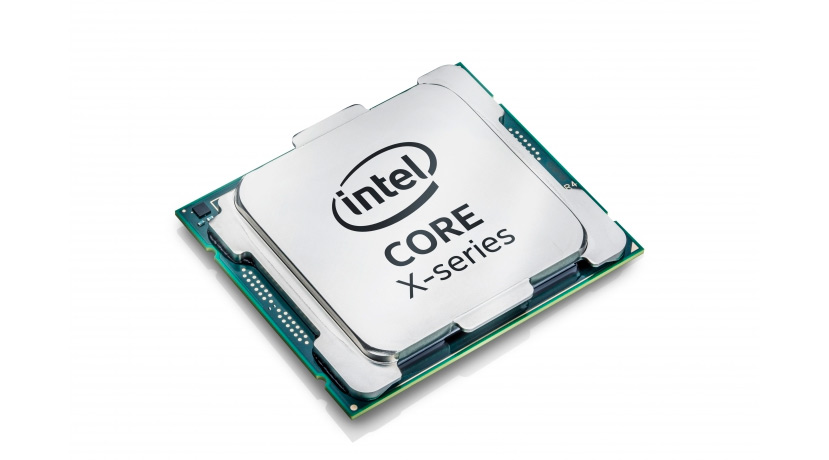 Intel’s Speed ​​Shift technology is also introduced, allowing the processor to take better advantage of hardware states beyond the explicit support for the OS’ new power states. This boosts the usage of higher frequencies continuously in OS lacking modern drivers that use classic ACPI states.

Intel’s Turbo Max Technology 3.0 is not a novelty, but it is as, or even more, important in these multi-core processors. This technology does not focus on the first cores, as it is able to choose the ones that are in the best condition at any given moment to provide a higher frequency.

L2 and L3 caches have also been redesigned. We get more L2 cache, as it goes to 1 MB compared to the 256 KB of additional L2 cache per traditional core, alongside 1,375 MB of non-inclusive L3 cache per core compared to the 2.5 MB of previous models. This allows us to access each core’s cache data evenly throughout the architecture, no matter what core we are using. The increase in L2 cache is essential for virtual applications and reduces uncore frequencies lacking assigned cores as well.

The biggest obstacle that we will face when overclocking these processors is their TDP, therefore the need for additional cooling. These are processors with an out-of-the-box TDP of 165 W, which will go up quickly if we raise the voltage and frequencies. They also require delidding in order to remove the thermal compound that joins the die with the heat spreader if we want to improve them, as Intel, once again, did not use a solder between both elements.

Ultimately, if we want a half-decent overclocking with this €2,000 processor, we will have to tweak it and get a cooling system to match it. However, we can get its turbo frequencies to work steadily without messing with the voltage, and with an all-in-one liquid cooling system we can keep temperatures at bearable values, thus preventing any type of throttling or frequency reduction due to high temperatures.

This processor’s highest temperature value stands around 90 °C before reducing frequencies. Once it reaches that value, the processor will reduce all or some of its cores’ usage to keep itself under bearable temperatures, thus reducing its performance. If we keep temperatures at bay, we will enjoy an unbeatable performance. 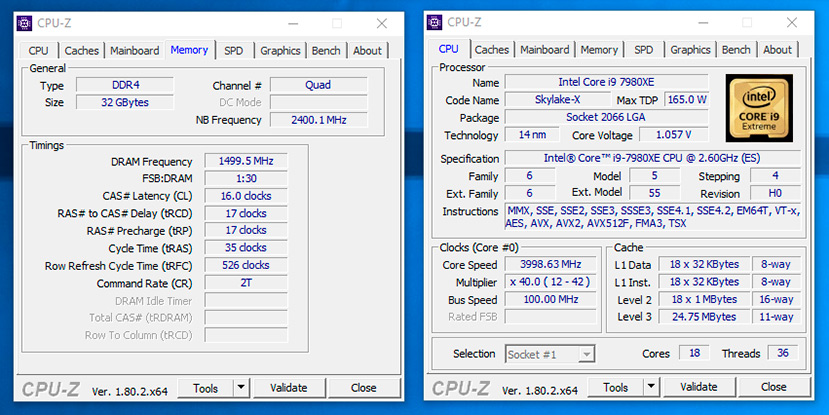 It supports high-speed memories by using XMP profiles; these 3,000 MHz units are already mid-end solutions in a market where frequencies are increased on a weekly basis

While testing it, we were able to steadily increase the operating frequency to 4 GHz. In its natural state, this processor does not go over 3.5 GHz when we push all the cores, so it seems that we are below the out-of-the-box frequency that the own processor offers, but the fact is that we gain 500 MHz over its stable frequencies. This is a remarkable improvement that is perfectly shown in the benchmark results and that does not force us to raise the voltage. 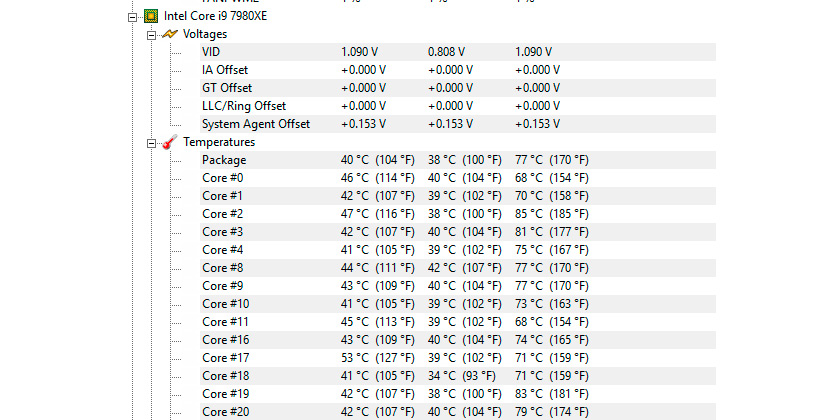 The maximum operating temperatures at this frequency are completely safe due to the processor’s design, especially since we did not have to mess with the processor’s voltage.

Although these processors are no surprise as far as overclocking is concerned, their large number of cores beat any competition from smaller processors. We will have to bear in mind that not every program that we run will be able to take advantage of these processors’ potential, or of any processor with a large number of cores for that matter. What they do have in their favor is that multitasking is as smooth as we would like it to be. 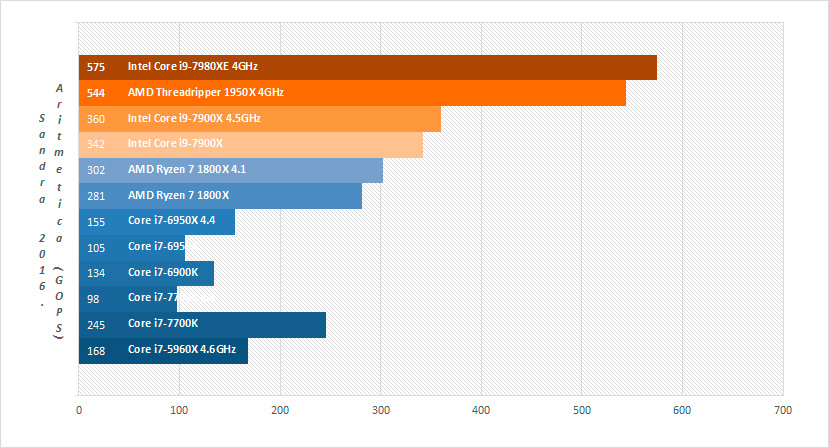 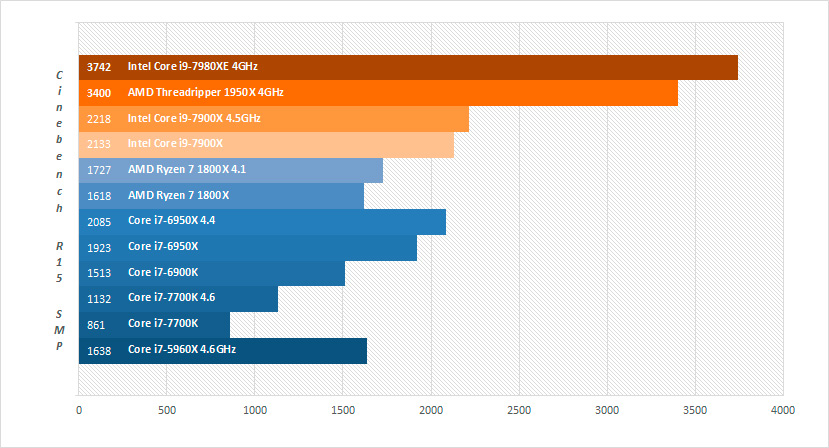 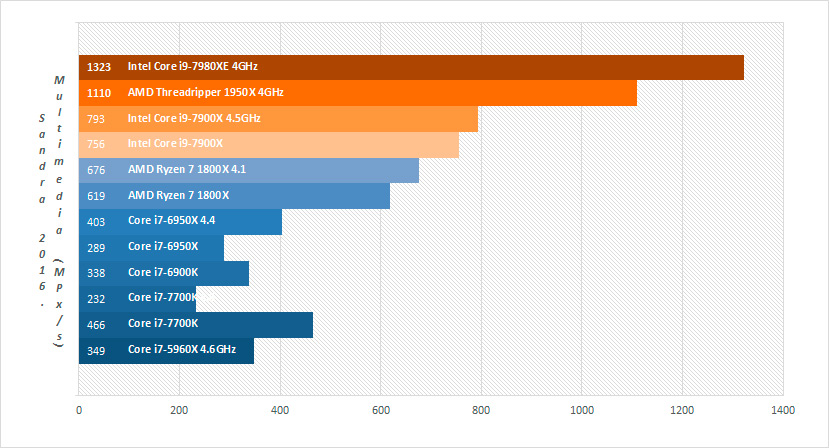 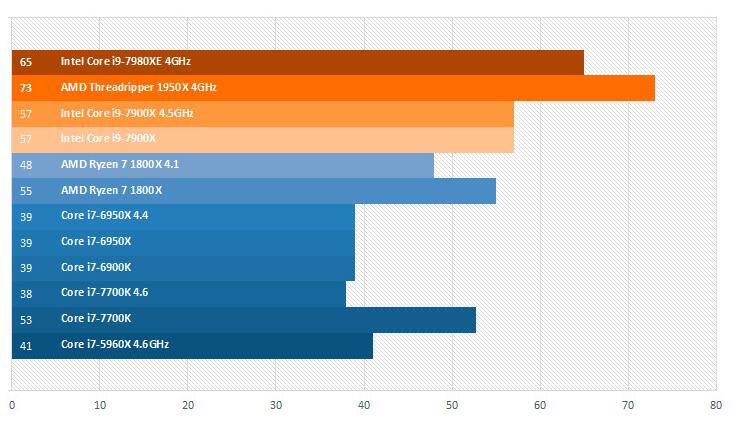 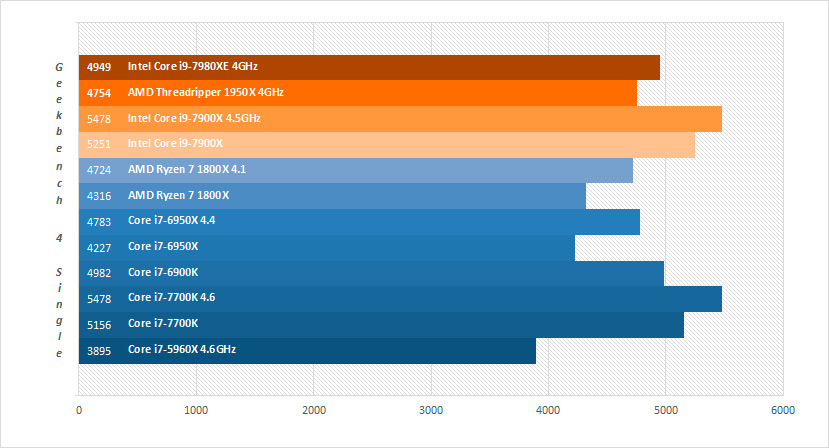 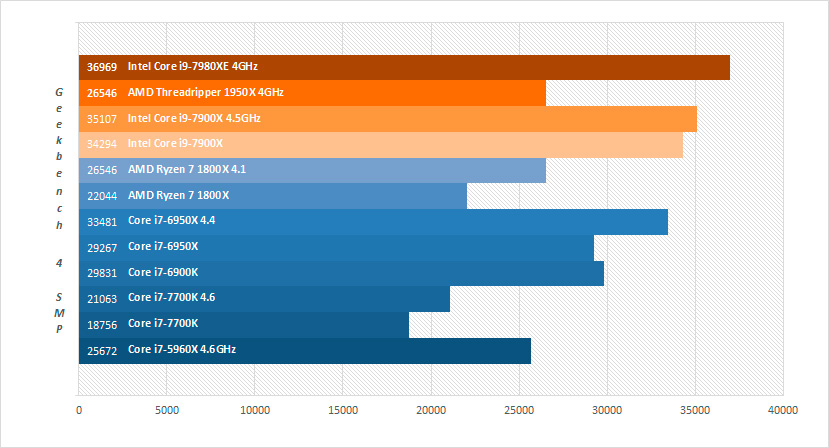 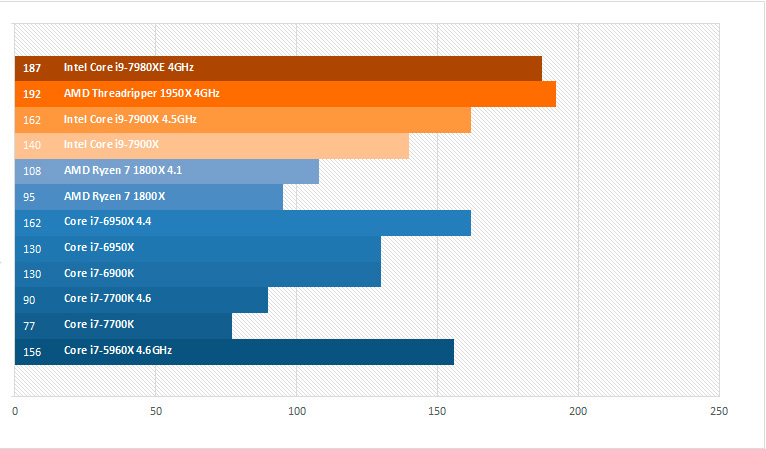 After looking at our results, the best processor for gaming that has gone through our lab currently is the Core i9-7900X, as it improves the maximum frequencies of all of its cores.

This certainly is the best domestic processor that money can buy. An outstanding solution with 18 cores and 36 threads that emerged as Intel’s overwhelming response to AMD’s nerve of trying to take over the processors world. This processor takes the lead easily, but at twice the price of AMD’s best 16-core processor.

Many will question the need for this kind of processors from both Intel and AMD, as they are certainly processors that not a lot of users will need, but technology is always being improved based on its most important milestones. What we see today as excessive, will become the basis to develop other technologies and other forms for people to work and be entertained in the future.

Thanks to the competition, Intel now gives us processors that it could not or did not want to offer before, let alone at an ‘affordable’ price for the public in general. Today we have this magnificent processor at a very high price, but accessible to those who can afford it. A behemoth that we now see as excessive, but that puts Intel back on top just one month after being dethroned.