Kaspersky Free vs Avast Free vs Bitdefender Free, what do the free antivirus have to offer?

Increasingly more users are deciding to rely on free antivirus to protect against malware. While for a long time the two free antivirus stars have been Avast and Avira, the main antivirus companies have decided to enter this sector of the market of releasing free versions of their paid antivirus so that users who don’t want to part with their cash have a basic security tool. Kaspersky is the latest security company to launch its free antivirus for Windows.

Yesterday afternoon, Russia’s Kaspersky Security firm announced its new security product: “Kaspersky Free Antivirus”, a free version of its well-known paid antivirus falls into the gap for the users looking for a solution free of charge to protect their systems.

What has Kaspersky deleted from it’s antivirus to make it free?

A characteristic shared by all the free antivirus on the market is that they typically only provide users with free antivirus protection, but the rest of the protective shields and security modules are limited to users of the paid versions. Kaspersky Free is no different. 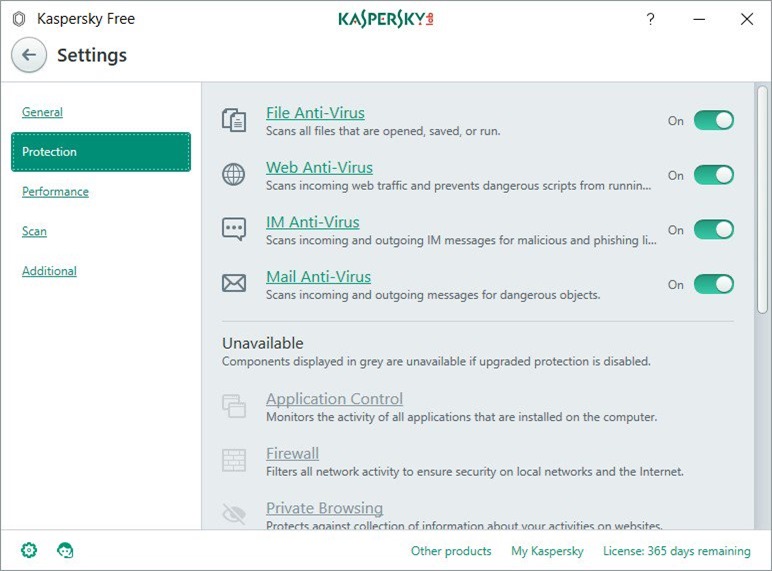 As we can see in the above screenshot, the main protective shields that this free version of the antivirus offers are mainly an antivirus engine that allows us to analyze our system in real time to detect and block any threat, as well as a web engine that protects us from the malware whilst you browse and a shield to protect ourselves from malicious messaging software clients and e-mail.

All other options have been disabled in this free version of the antivirus , from Firewall to control applications, private browsing, Parental Control, the protection of payment online and secure VPN connections, among others.

As we have said, most of the free antivirus only tend to offer their antivirus engine, leaving all the other protctive shields blocked until the user decides to pay for the full version of the antivirus.

Beyond the antivirus engine, Avast is probably the security solution that offers most extra options. For example, the free version of this security software, in addition to its engine, has two shields that allow us to analyze our Wi-Fi network for threats and vulnerabilities and protect passwords in their safe chest, so that no one can access them without permission.

In the case of Bitdefender, for example, this free antivirus offers real time protectio, both data base and with their own company cloud, as well as navigation protection (as does Kaspersky Free, and an anti-rootkit module).

Other free antivirus may include other additional protection modules, for example, a tool to optimize your PC, as is the case with AVG.

If we are looking for a free antivirus and have not yet decided, our friends at PC4U have compiled the 10 best free antivirus in 2017 for Windows that will undoubtedly help us to choose. And, if not, we can not forget Windows Defender, the antivirus by Microsoft that, little by little, is turning into one of the best security options to protect our Windows, especially in the latest versions of Windows 10.