Since the GS60 and GS70 were launched in early 2014, the GS lineup has been the perfect example of ultra thin gaming laptops.

With the GS65 Stealth Thin, MSI is exploring an idea that is quite overused in multimedia laptops, although it is actually quite new in gaming laptops because it reduces bezels as much as possible to get a smaller chassis. For example, this is what ASUS and Dell do with their ZenBook and XPS lineups, respectively.

The laptop is slightly different from the MSI GS63VR, which was the only 15.6-inch GS model so far. The MSI GS63VR also has an independent numeric keypad, which the GS65 lacks due to its small size.

Instead of the striking red details found on most gaming laptops, MSI has decided to go with a subtler design for the GS65. Although it has the typical black finish of the GS lineup, the GS55 also has elegant golden details on the exhaust vents, the hinges and the lid, which has a golden line around it and rocks the Gaming Series dragon logo in the same color.

Although MSI is using the word “thin” for the model’s name, it is actually not any thinner than the aforementioned GS63VR Stealth, which is 17.7 mm think (according to the manufacturer). Its weight is also very similar (both models weigh 1.8 kg, according to MSI).

The GS65’s biggest downside is that the chassis is not sturdy enough. Despite being made entirely of aluminum, it somewhat tends to bend under focused pressure, which happens both on the lid and the keyboard area.

It is worth mentioning that the camera is above the display and not below like in a lot of models with thin bezels like this one.

The laptop’s hinge system is the only part made of plastic and allows us to fold back the display 180º. The design keeps the display in its place while using the laptop as usual, but it cannot prevent the display from moving if we use the laptop in unstable places like moving buses or trains.

The GS65 is one of the first laptops to feature the new 6-core 8th-gen Coffee Lake processors (or 9th-gen if we take into account the Kaby Lake R), which are much better in terms of performance than the 7th-gen Kaby Lake processors.

The laptop has a 6-core Intel Core i7-8750H at 2.2 GHz, which scored twice as much as the old Core i7-7700HQ in the multi-core Cinebench R15 benchmark (over 1000 points). Such score means the laptop is able to perform advanced tasks in the most demanding ways.

Thanks to the second version of the Turbo Boost technology, the laptop can reach 4.1 GHz with one or two cores, 4 GHz with four cores, and 3.9 GHz with six cores.

The processor has 9 MB of cache and a 45 W TDP. It is also compatible with VT-x and VT-d virtualization technologies, AVX2 and AES-NI instructions, and SGX and MPX extensions. 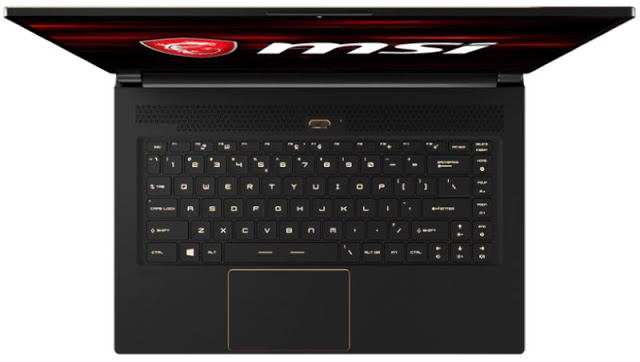 As we can see in the manual, the GS65 does not have a service door, making it necessary to take off the bottom case entirely to get access to the laptop’s internal components. There we can find two DIMM slots that will let us increase the amount of RAM up to 32 GB.

The NVIDIA GeForce GTX 1070 with 8 GB of GDDR5 RAM has great 3D power, providing an excellent gaming experience (highest settings in Full HD resolution) on virtually every current title. Some games can even be played in 4K resolution.

Besides the advanced hardware setup, the GS65’s gaming side is embodied by the display, which is a 15.6-inch Full HD (1920 x 1080) LED-backlit LCD panel with a refresh rate of 144 Hz. The refresh rate cuts down the GTG response time to 7 ms for a smoother playback, allowing us to make the most out of the high frame rates provided by the GPU. We would otherwise misssuch power on a 60 Hz display (we would be limited to 60 FPS).

Thanks to the matte finish and great brightness levels, we could use the laptop outdoors. The display also has excellent contrast levels, a very high color accuracy (the sRBG gamut coverage is widely over 100%) and relatively wide viewing angles.

The laptop has great options for network connectivity. It is compatible with Gigabit Ethernet, 802.11ac Wi-Fi and Bluetooth 5.0.

Both network cards (Ethernet and wireless) were made by the renowned network card manufacturer Killer. They have obvious advantages, like drivers that prioritize the connection of certain apps and games and the Double Shot Pro technology that provides better transfer rates and lower pings when connecting to the network using both cards.

Other elements are the three USB 3.1 Type-A ports, a USB 3.1 Type-C port (compatible with Thunderbolt 3), an HDMI port, a mini DisplayPort output, backlit keyboard, multi-touch touchpad and an HD webcam.

The exhaust vents are located on the laptop’s sides and rear, so the ports feel unsatisfactorily placed in the middle of both sides. It is worth noting that the power jack is placed next to the right exhaust vent, so the charger cable might partially block it, preventing the the cooling system from working optimally.

The island-style golden-backlit keyboard provides a great writing experience thanks to the size of the keys, the nice travel distance and the great texture. The large smooth ClickPad has a thin yellow border, provides a great response and precision, and is compatible with multi-touch gestures.

A built-in app lets us configure the backlight color of each key one by one and set up backlight effects and animations.

The GS65’s cooling system is dubbed Cooler Boost Trinity and rocks three fans that provide an air pressure increase over 45% (according to MSI).The fans are really quiet under a light workload, but they spin faster under a heavy workload and get clearly noisier, although the noise is almost never bothersome.

The temperatures on the wrist rest and the keyboard are manageable under heavy load, letting us work comfortably all the time. However, some areas on the bottom case can get quite hot at the same time, so it is not recommended to place the laptop on our thighs in this case.

Although they provide quite high volume levels, the two stereo speakers on the bottom case are not quite convincing in terms of sound quality. However, we can somewhat work around the issue by tweaking the built-in Nahimic audio software, which lets us change settings and customize the sound.

The 4-cell battery (82 Whr) has a great capacity that allows the GS65 to get an autonomy of around five hours under a light workload, which is quite long for a laptop with these specs.

It is delivered with Windows 10 Home (64 bits) installed and with its corresponding license.