Just a few weeks after the launch of AMD’s affordable Radeon RX 480, Nvidia counters with its proposal for the mainstream market. The new GeForce GTX 1060 is more expensive than the two Radeon RX 480 models and loses two gigabytes of VRAM compared to AMD’s 8GB, but Nvidia promise to compensate with more power, and performance levels like those of a GTX 980. A couple of years ago that meant an investment of almost six hundred euros. Today, thanks to this new card, just a little more than three hundred. It is an interesting offer, but does the GTX 1060 meets all it promises?

Based on the new GP106 chip using Pascal architecture, Nvidia processor has much in common with its equivalent of the previous generation, the GM206. The company took the model that uses the current top performance and reduced its CUDA cores by half, putting it at 1280 shaders. This gave us a good product (Though not a great one) with the GTX 960, but Nvidia has taken measures this time to improve performance, and as our tests show the leap is considerable.

Now, for example, it no longer opts for an anemic 128 bits memory bus, this time the GTX 1060 uses a 192-bit interface with GDDR5 memory modules of 8gbps, resulting in a bandwidth of 192 GB/s. This is a considerable improvement over the GTX 960, although it remains below the 256 GB/s offered by the 8GB model of the Radeon RX 480. This configuration limits the GTX 1060’s memory to 3GB and 6GB, but fortunately Nvidia only opted for the latter, whereby all GTX 1060 are fitted with six gigas. This means there is a good balance between rendering power and framebuffer memory, and that it is more prepared for the future when playing at 1080p or 1440p.

In this article we will analyze the Founders Edition, a limited model only offered by Nvidia. Its design is similar to the rest of the Pascal family cards, but the biggest difference is that this time we have a plastic chassis. Its appearance and feel are good, and the choice of ports is the same as their older sisters, with three DisplayPort, a DVI dual-link and an HDMI 2.0. However, SLI expansion port on top was dropped, ruling out support for multiple cards. This will not affect its target audience, but it is a downside move for the minority who may have explored that option.

Finally we have one of Nvidia’s star features, energy efficiency. With the GTX 1070 the company managed to deliver the performance of a Titan X while reducing consumption by 100W, with a TDP of 150W. The GTX 1060 follows the same route with only 120W and using a single PCI Express 6-pin cable. This provides enough power for overclocking, with Nvidia stating that the card is capable of reaching 2GHz using standard air cooling.

We begin our tests watching 1080p performance, with the GTX 1060 facing the GTX 960, 970 and 1080, as well as the RX 480 of 8GB and the R9 390. AMD released several days ago drivers that fix the bug which caused excessive consumption in the PCI Express line and add some specific optimizations for Polaris. The data that you will see in these tables correspond to these new drivers, but the difference is just one or two FPS respect to the release driver.

We have also added to the list of tests, the DirectX 12 version of Tomb Raider, which was recently updated to add support for asynchronous computation. This provides a small performance improvement to AMD, but not enough to present a big change, so Nvidia maintains its leadership in this particular game.

According to Nvidia the GTX 1060 is “an average fifteen percent faster and about seventy-five percent more efficient than the equivalent competing card at stock speed”. We’ll talk about efficiency later but assuming they refer to the RX 480 as direct competition, the 1060 GTX does not fulfill that promise fully. Assassin’s Creed Unity has a performance 15% greater and on Rise of the Tomb Raider the figure rises to 23%, but on other games (Crysis 3, Far Cry Primal, The Witcher 3) the advantage is only about 11%.

On The Division the 1060 GTX is ahead of its rival by only 3%, but in Ashes of the Singularity it is the RX 480 that offers 3% better performance. Hitman with DX12 still has problems with Nvidia, and here the AMD card offers an 11% improvement.

The assertion that the GTX 1060 offers the performance of a GTX 980 depends on the game you choose. Assassin’s Creed Unity has a level of almost exact parity, Far Cry Primal runs 4% better and The Witcher 3 is about 7% faster. In other games, however, the GTX 980 takes the lead. Sometimes it is small and within the margin of error (The Division and Hitman), but in Rise of the Tomb Raider we have seen a 7% advantage with the GTX 980. Given that Nvidia hasn’t nipped its fingers before when making this kind of promises (The GTX 1070 is actually faster than the Titan X), this came as a surprise. In general, however, you get a similar experience, and GTX 1060 is clearly faster than the old GTX 970.

Moving on to the tests at 1440p the story is very similar. In comparison with the GTX 980 the new card falls within margins of error with Assassin’s Creed Unity, Ashes of the Singularity, Far Cry Primal and Hitman. It is a 3% faster in The Witcher 3, but 4% slower in The Division and almost 9% slower in Crysis 3. It also falls behind with Rise of the Tomb Raider, where once again the GTX 980 holds a lead of 7%.

Faced with the RX 480 we see big advantage in Tomb Raider (14%), Assassin’s Creed Unity and Crysis 3 (both 11%), but Ashes of the Singularity and Hitman still work better with AMD graphics card. In the other titles the improvement of the 1060 GTX are more discreet, 2% on The Division and 6% on Far Cry Primal.

The final outcome is clear: the GTX 1060 offers generally higher performance than the RX 480, but AMD continues to lead in some games, which it is not that bad considering that this product is cheaper and has more memory. The new Nvidia graphics card offers an equivalent experience to the GTX 980 on most cases, but Maxwell cards offered an excellent overclocking capability and, so far, Pascal equivalents have failed to reach their level in this regard. 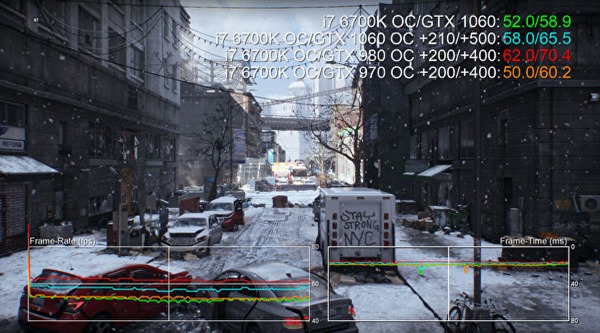 That does not mean you can not achieve a great improvement via overclocking. Getting the GTX 1060 reach the 2GHz promised by Nvidia is very easy, and in fact we were able to raise the core to 2050 MHz. Like in the GTX 1070 and 1080 you can go even further, but any clock increase lowers quickly and stays around 2.05GHz. The new card seems to have the same 8Gbps memory modules of the GTX 1070, with which you can easily overclock to 9Gbps adding a +500MHz offset on your favorite overclocking tool. An overclocked GTX 1060 stands easily past the stock GTX 980 and tears apart a stock GTX 970. Adding 210MHz to the core and 500MHz to the memory you gain between 11% and 15% extra performance, depending on the game.

As for energy consumption, it is clear that once again Nvidia delivers exceptional performance per watt. Judging by our metric of peak consumption, changing a GTX 980 for a GTX 1060 saves 75W, while in the case of the GTX 970 it saves 65W.

We need to re-test the RX 480 overclocked with the new driver, but based on the old one (which apparently requires less power to take more PCI Express input) the GTX 1060 offers significantly better performance with savings of 40W. Even without overclock, the Nvidia card is ahead of the competition, with a difference of 18W (in comparison, the consumption of the RX 480 increases by 44W in our tests)

There is another factor to consider regarding the advantages of the GTX 1060 compared to older Maxwell cards. A lower power consumption means you can use a less powerful power supply, and remember that only one six-pin connector is needed. In addition, the PCB in the GTX 1060 is quite small, so we suspect i won’t take long for mini-ITX alternatives to arrive, ideal for a small computers.

When the price of the GTX 1060 was officially announced we could feel the sigh of relief that came from the offices of AMD. In terms of price vs performance the RX 480 4GB is still playing in another league, but it would not surprise us to see later on a GTX 1050 3GB with a shortened version of the GP106 processor. On the other hand, the RX 480 8GB is cheaper than the GTX 1060, but also slower. It has, though, more memory and seems to do better in the type of games that have traditionally benefited AMD hardware.

Compared to other Nvidia products, the GTX 1060 offers good value for money. At present, the GTX 970 is still at a similar price to that of the new card and it seems impossible even when Maxwell stock is removed that the GTX 980 gets to be at the price of the 1060. What is clear is that its cost is much higher in Europe than in the United States(249$), but that is the price to pay for the weak position of the economy of the old continent. In the end what we have is an iterative improvement of the classic GTX 970, a card with more performance, more efficient and with two extra gigabytes of memory for a similar price. If we add some potentially exciting technologies, like multiprojection (Which should greatly improve performance in VR applications if developers take advantage of it), we are dealing with a product that is very much worth it. Not the major coup against AMD that we expected, but a highly recommended graphics card.

The CUDA cores were cut in half compared to the GTX 1080, but the rest of the cuts are less drastic than the GTX 960, especially in terms of ROPs and memory bandwidth. The GTX 1060 packs the full version of GP106 Nvidia processor.