NVIDIA Shield TV, an Android 4K HDR TV for the utmost in gaming in the your lounge

During CES 2017, NVIDIA introduced -among other things- their new entertainment platform Shield TV, announced as a “media streamer”. This is an Android TV capable of 4K resolution with HDR that offers a great experience in the streaming of multimedia content, games and even artificial intelligence thanks to the integration of the Google TV assistant, SmartThings Hub and the NVIDIA Spot AI microphone.

As we said, the new Shield TV offers a great experience at 4K resolution and with HDR (High Dynamic Range) technology for better viewing of compatible content, such as, Amazon Video, Netflix, Youtube, Google Play Movies or VUDU. The Youtube TV application will be updated soon to incorporate 360 degree content.

Also, the manufacturer highlights the Shield TV’s capacity as a games console. They have expanded the catalog of compatible games, and these are already in the thousands, adding the imminent inclusion to the catalog the latest Ubisoft titles, such as, Watch Dogs 2, Assassin’s Creed Syndicate and For Honor among many others. The launch of the new Ubisoft games will arrive at Shield TV simultaneously to their PC launch. In addition the manufacturer has announced that they will continue adding games from different franchises with native support for the platform, such as Tomb Raider, Shadowgun Legends or The Witness. 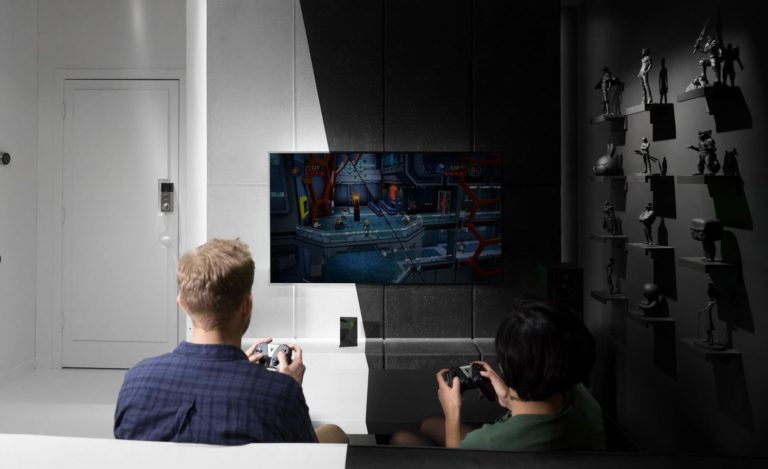 In the coming months, NVIDIA will release an update for Shield TV which will add a series of Artificial Intelligence capabilities that will completely transform the concept of home entertainment. The Google TV Assistant technology will be added, offering intelligent voice interaction with acoustic notifications and allowing control of the Shield TV almost completely with voice commands. In addition, with the integration of the SmartThings Hub technology, Shield TV is converted into a connected home brain, and with the NVIDIA Spot AI microphone we will be able to control all of our connected appliances just by talking to them.