Recently, HP presents a laptop perfectly designed for demanding gamers that want to move around a lot.

On this occasion we review the OMEN 15-ax043dx , a computer with outstanding features for its price range and one that will allow you to go anywhere and still be able to enjoy your favorite games without much trouble.

This laptop is a great computer for those gamers looking for both power and portability in a single device. Usually, portable computers benefit more the latter than the former, but in the case of the OMEN 15-ax043dx we see that the that the scale leans a little more towards quality because it is slightly larger and heavier than average. Its dimensions are approximately 38 cm in width, 25 cm in depth and 2.5 in height (when the laptop is closed) and it weighs practically two kilograms, although depending on the characteristics you set up, it may vary slightly. 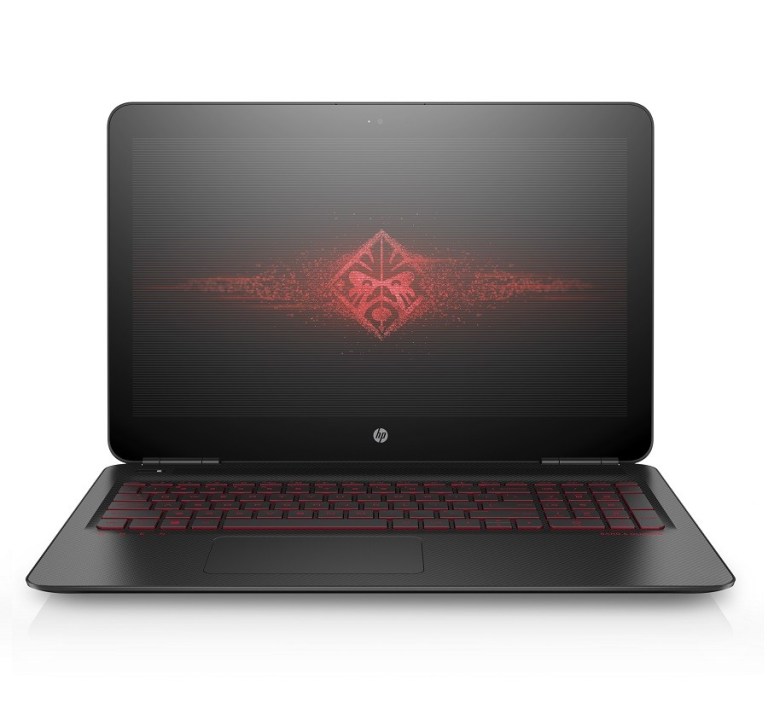 Its design is quite elegant. The exterior is made of durable carbon fiber of a slightly textured black color while the interior is of the same color but without texture. It has red accents (very typical in recent brand gamer laptop designs) although fewer than in other computers, like Asus GL552JX. This laptop feels sturdy and well manufactured so you’ll hardly have manufacturing problems with external parts, as long as you take care of your system as you should.

One observation though, is that you have to be careful and protect the cover of the monitor since it’s easily scratched, so a thick protective cover could help keep your laptop in good condition for longer. As usual in all laptops, the heating of the internal components will be noticeable a few minutes into your gaming session, as internal cooling fans activate and make a noticeable noise, but nothing to worry about. Remember to always keep the ventilation ducts clean to avoid future problems and overheating won’t be a problem. 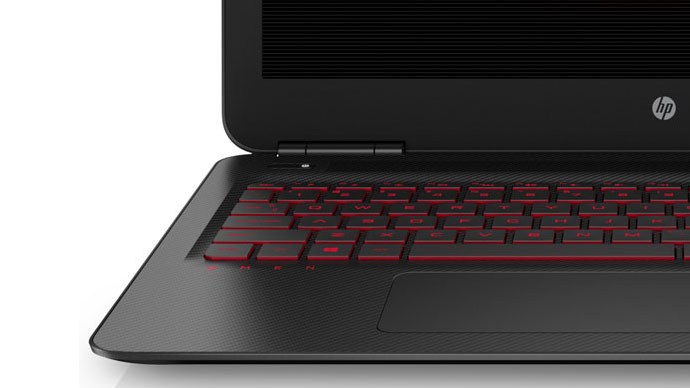 A weird choice to include in this computer was the keyboard because, although very elegant with its red LED backlight, it’s not a mechanical keyboard: this time HP leaned towards one rather similar to those used in office laptops.

In these keyboards the keys are very thin and while the feeling of writing a text (like this review) is very pleasant to the touch with these kind of keyboards, this is something you do not want on a good gaming keyboard.

My impression is that it won’t be very durable for some people as there are some gamers that get excited playing games and press the keys harder, so they could fail early if you use it too much.

Speaking of components used in business laptops, it is worth noting that HP decided to use a touchpad without buttons much like Apple’s; regrettably, the resemblance ends in its appearance since the touchpad feels a little flimsy, so it would be ideal to connect your USB mouse to avoid using the pad too much, not only to avoid failures due to use, but also because it’s not as sensitive to clicks on the area where the buttons are traditionally.

A component that may not look like a good choice is the screen, since it does not show the best fidelity on Window’s desktop. However, this screen will allow you to enjoy your games with very good sharpness thanks to the WLED FHD IPS UWVA technology with an anti-reflective coating. It can display a maximum resolution of 1920×1080 and its viewing angle is pretty good in all directions. 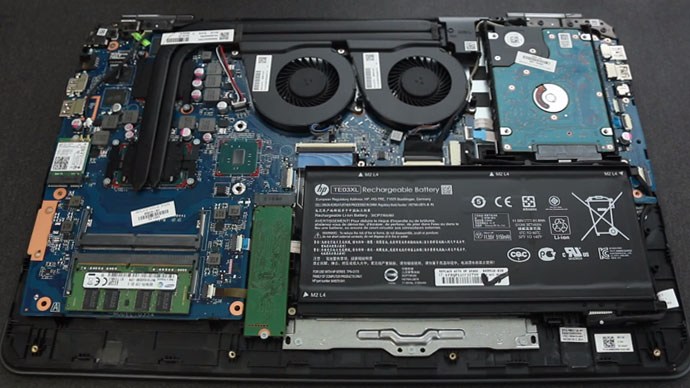 Internally, the HP OMEN 15-ax043dx comes equipped with an Intel Core i5-6300HQ quad core processor that runs at 2.3 GHz with 8GB DDR4 SDRAM at a frequency of 2133 MHz. To this we add a hybrid choice in video cards: for low power consumption it features an Intel HD Graphics 530 and for games that require the extra muscle it has an NVidia GTX 960M with 4GB of VRAM GDDR5. It also has a 1TB SATA hard drive (5400 RPM) plus two USB 3.0 ports and a USB 2.0 port, HDMI output and a 2-speaker system Bang & Olufsen, so the sound is amazing for a laptop.

These features make the HP OMEN a good purchase for gaming. Unfortunately, as with almost all gaming laptops, it’s not possible to run the latest games at maximum quality, but fortunately it’s always possible to find a configuration to run them one way or another at 30 fps, at least. 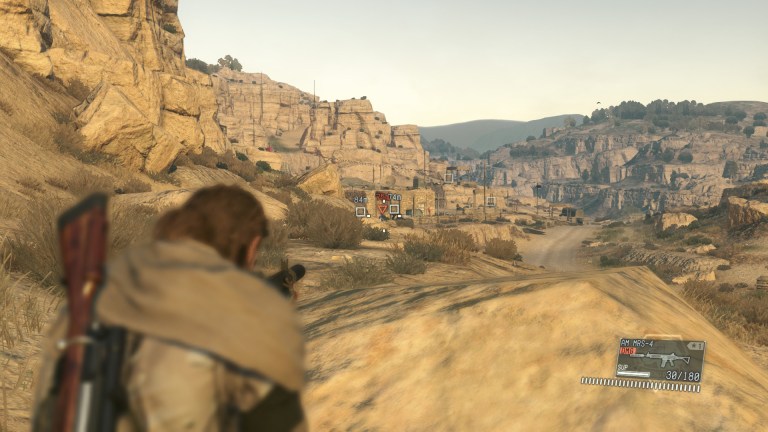 If you’re ok with this sacrifice, then this laptop is a great alternative for you to consider buying.

As always when doing our tests, we raised the settings up to the highest possible quality that allows us to run the game at a 1920×1080 resolution and then we measure how many FPS is the computer able to achieve.

As you might expect, Dishonored was the game that got the best numbers, it got a maximum of 131 fps averaging 108, but given that it’s the game with the most time on the market this is no surprise.

In the case of Watch Dogs results were something to raise a few eyebrows given that the highest achieved by the computer was 30 fps averaging 21, even MGS 5 had better numbers: 38 fps in average with a maximum of 48. This may speak of how ambitious the Disrupt engine is or how well optimized the Fox Engine of Metal Gear Solid 5 is. Or a mixture of both. 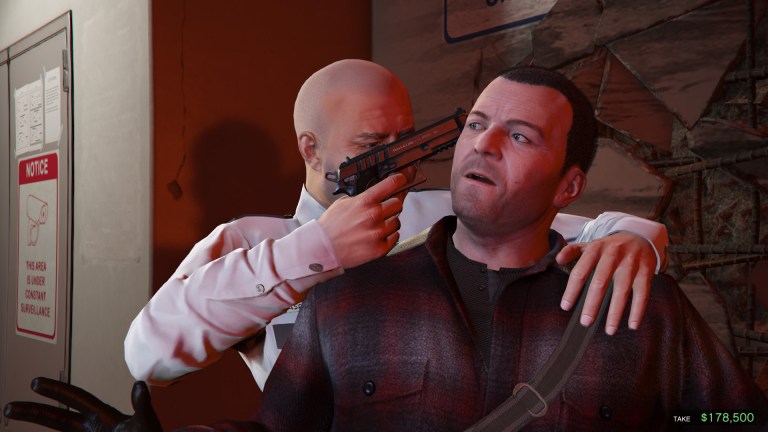 Moving on to more modern games, we see that Grand Theft Auto V had similar values to those in Watch Dogs with a maximum 39 fps while the average was 23. On the other hand, the two games released this year that we tried performed better. Rise of the Tomb Raider managed to get to 60 fps, although just as a top since in average it roamed around 32 fps.

It is worth mentioning that we could not run the game on Very High settings because the game requires a very expensive 8GB of VRAM, therefore this values are of the High setting.

On the other hand, Overwatch gave us very good values compared to other games we tested: its top value got past the 60 fps up to 62 and maintained some nice 48 fps. However, and pro gamers will agree on this, this is a really low value for a competitive game, where it is recommended to run at a minimum of 90 fps.

Fortunately, you do not have to make many sacrifices to reach the mark, it is enough to put the game on High settings, lower the anti-alias and lower shadow quality. 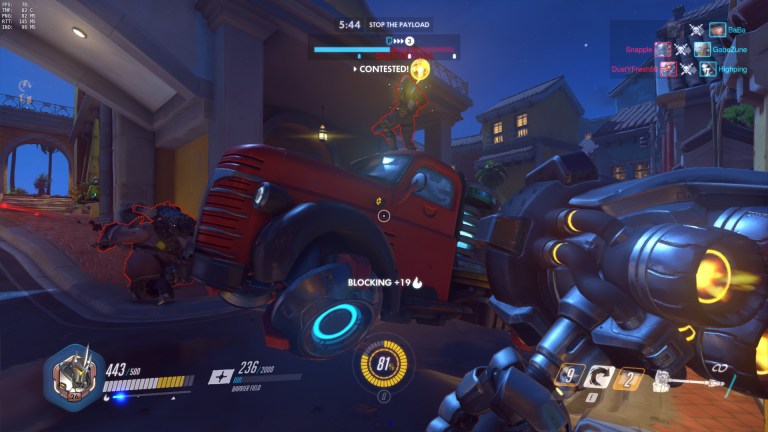 Something that surprised us a little was the performance of The Witcher III that, as usual, had the lowest values: on this laptop it got up to 19 fps and average of just 15. Clearly, of all the games we tested this was the most demanding given its graphic features and it was the greatest challenge to overcome. However, do not get discouraged: it takes very little visual sacrifices to run the game at 30fps and be able to enjoy it with a medium graphics quality. Surely it is far from the best the game can look, but you have to admit it: a computer, laptop or desktop, able to run it the highest settings costs a lot of money.

In summary, the HP OMEN 15-ax043dx is a very good alternative for those who prefer to have a portable gaming pc, because given its characteristics you can play many games very well without losing much quality. Clearly, as it is the case with almost all laptops, it is difficult to run the latest games at the highest quality, but fortunately this computer will allow you to play whatever you want even if you have to reduce the visual effects and details a little. If you don’t mind playing at 30fps, we recommend this computer if you’re thinking of upgrading your system soon.