The Flash Memory Summit just ended, so have to talk about storage devices. One of the biggest bombs of the fair was given by Seagate, as they introduced their new PCI-Express SSD Nytro XP7200, with a total capacity of up to 7.7TB and is capable of operating at speeds up to 10,000 MB/s . They have also shown a 3.5-inch SSD with 60TB capacity.

The system is actually quite simple. Seagate has used a PCI-Express 3.0 x8 capable of accommodating four units SSD NVMe in card format M.2. Thanks to this card that incorporates a controller itself, you can run the four tandem (as per Seagate it operates in RAID 0 software, which is a bit weird having controller), adding capacity and reaching a theoretical speeds of up to 10GB/s read and 3.2GB/s write, with up to 940,000 IOPS and 160,000 IOPS in random rates respectively. These PCI-Express SSDs will begin to be seen by September, in capacities of 7.7TB (four SSDs 1920GB) and 3.8TB (four SSDs 960GBs). 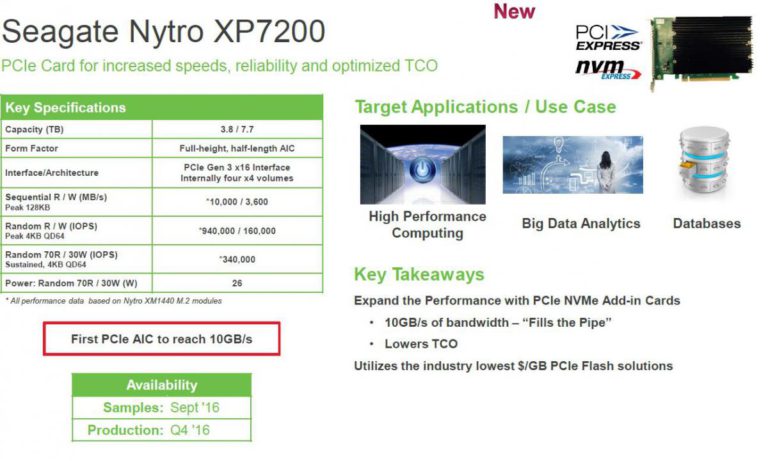 On the other hand, Seagate has also shown an SSD in 3.5-inch format, the usual mechanical hard drives. A SAS interface capable of providing theoretical speeds up to 1500MB/s read and 1000MB/s writing the main advantage of these devices is their massive capacity reaching 60TB in the higher range.

For now, Seagate has not given much information from these records that still have no name, but said it uses memory chips manufactured by 3D TLC NAND Micron Technology and employing a single controller. There is also no release date, price, or anything else, so we will have to wait some time.