The final chapter of a trilogy that began five years ago, Shadow of the Tomb Raider seems to have fallen back on past success rather than innovating.

For many years, Lara Croft was more than just the heroine of a cult video game, she was also a sex symbol, famous for her mini-shorts, her ample breasts, and her two pistols. However, her latest incarnation no longer fits that description at all. She is no longer the sex symbol created during an era when it was taken for granted that video games were exclusively male-oriented. Ever since Square Enix rebooted her image in 2013 (with its Tomb Raider game), Lara has become a mature young adult – a true explorer.

Square Enix decided to capitalize on the new direction in which it had taken the game franchise by creating a trilogy. After Tomb Raider and Rise of the Tomb Raider, Shadow of the Tomb Raider has now been released. This last chapter is meant to conclude Lara’s epic saga by allowing her to fully assimilate her legacy, her status, and her destiny.

Shadow of the Tomb Raider is able to take full advantage of the power of modern gaming consoles – allowing Lara to look her absolute best. The technological maturity of the PS4 and the Xbox One has allowed Eidos Montreal, the studio that has taken over for Crystal Dynamics, to develop a highly-detailed and visually stunning game. This high level of detail made it possible, for example, to realistically recreate a Mexican village celebrating the Day of the Dead, the rich scenery of Peru as well as dark and dense forests – not to mention the stunning realism of the game’s underwater environments.

This rich detail can, in large part, be credited to a technology that we never get tired of highlighting: HDR. Eidos Montreal’s exploitation of HRD’s full potential allows Shadow of the Tomb Raider to excel. Far from being just another asset that can be mentioned on the game’s packaging, HDR accentuates the contrast between the game’s decidedly dark overtones and the luxuriance of its landscapes, the brilliance of its in-game treasures/reflections, and its amazing lighting effects. The Xbox One X, because of its increased resolution, provides wonderful detail (it is also possible to select a 60 fps mode geared towards more fluid gameplay).

However, this game has a small number of technical defects such as a few framerate inconsistencies during the loading of scenery (especially in its village scenes which are full of animated characters). 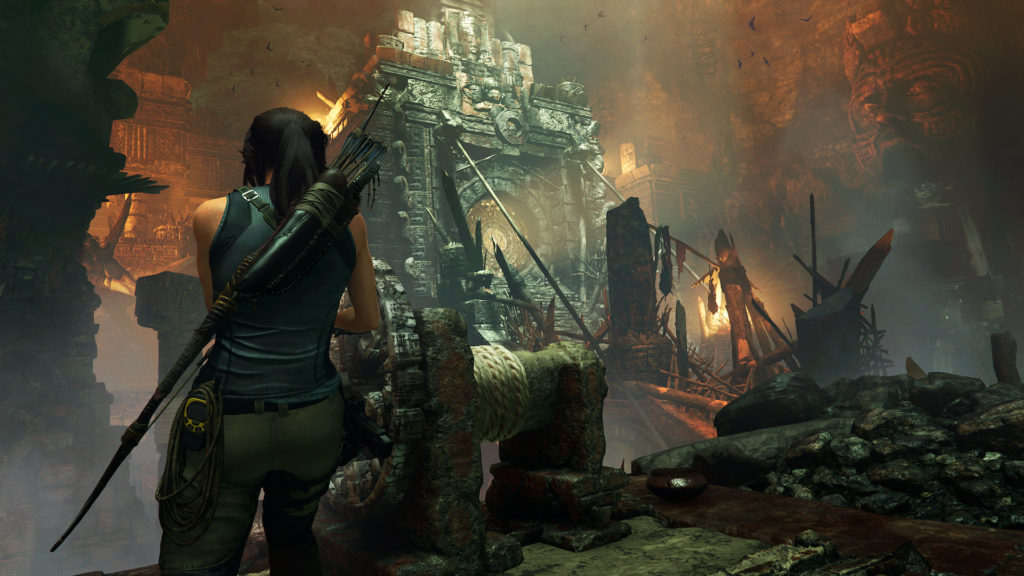 In Shadow of the Tomb Raider, Lara Croft must finish what she started, namely putting an end to the Order of Trinity, in addition to dealing with other more personal matters concerning her family. The whole game revolves around a Maya apocalypse initiated by Lara herself. Feeling responsible, Lara believes that she is the only one who can prevent the world from coming to an end and this heavy burden will lead her to make certain sacrifices, to push herself beyond her limits, and to confront any obstacles in her way – at any cost.

Eidos Montreal, which was not able to count on the talents of Rhianna Pratchett (scriptwriter for Tomb Raider and Rise of the Tomb Raider), put the emphasis on narration in an effort to bring closure to the trilogy’s storyline. Unfortunately, except for a few exceptional dialogues, Shadow of the Tomb Raider tends to follow the well-established patterns of its two predecessors. Moreover, the studio put so much effort into this game’s writing that it takes precedence over all other aspects, not least of which, its in-game action.

With the release of Rise of the Tomb Raider (with its memorable mountain climbing scene) still fresh in our memory, we were expecting this third chapter to be action-packed. However, Shadow of the Tomb Raider only features a few intense moments of action which are, admittedly, mind-blowing, but which are too few in number to be truly memorable (especially given that some of them are overly comical or not very original). What a shame. 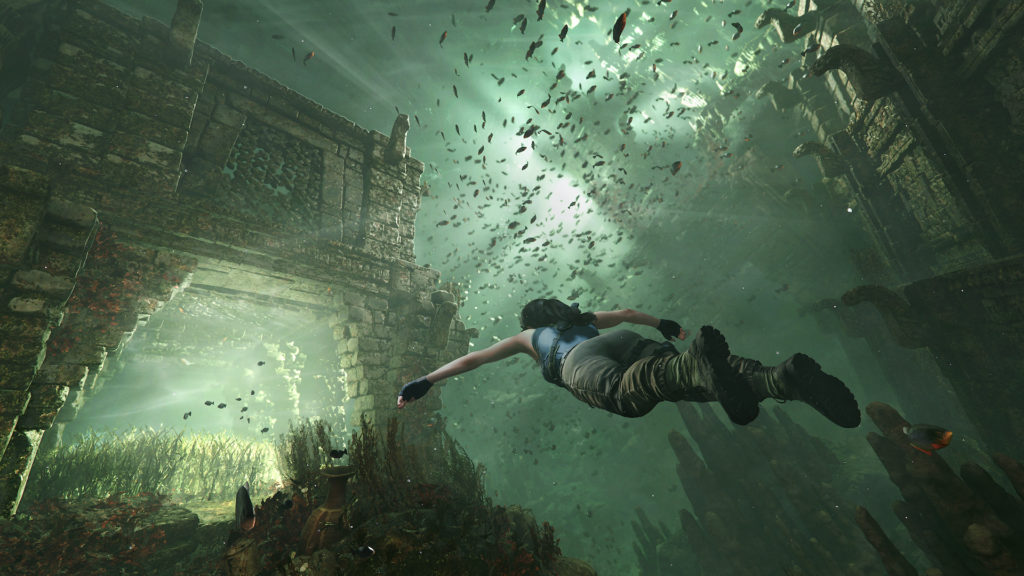 Essentially the same game as the 2013 version

When Rise of the Tomb Raider was released, a number of people criticized its lack of creativity, and for good reason: this first sequel resembled the trilogy’s first chapter, Tomb Raider, a little too much. Unfortunately, the same criticism can be made of Shadow of the Tomb Raider; due to a lack of audacity on the studio’s part, the game comes across as highly repetitive. While its gameplay, which is the product of perfected technology is quite enjoyable, we would have liked to have seen more innovations than the ones actually included in the game (such as abseiling descent during climbing scenes, the ability to hide in walls of leaves or to cover yourself in mud in order to go unnoticed, and anxiety-provoking underwater exploration scenes).

In a nutshell, Shadow of the Tomb Raider, despite a few exceptions (such as a few passages that pay homage to Predator in which Lara preys on her enemies with the help of Mother Nature), feels too repetitive. The most charitable critics will say that Eidos Montreal did not want to take the risk of betraying the artistic vision of Crystal Dynamics, which may have set the bar too high with its franchise reboot. However, others will tell you that it would have been alright to deviate slightly from this vision in the name of innovation, and in order to allow Lara Croft to explore her full potential. 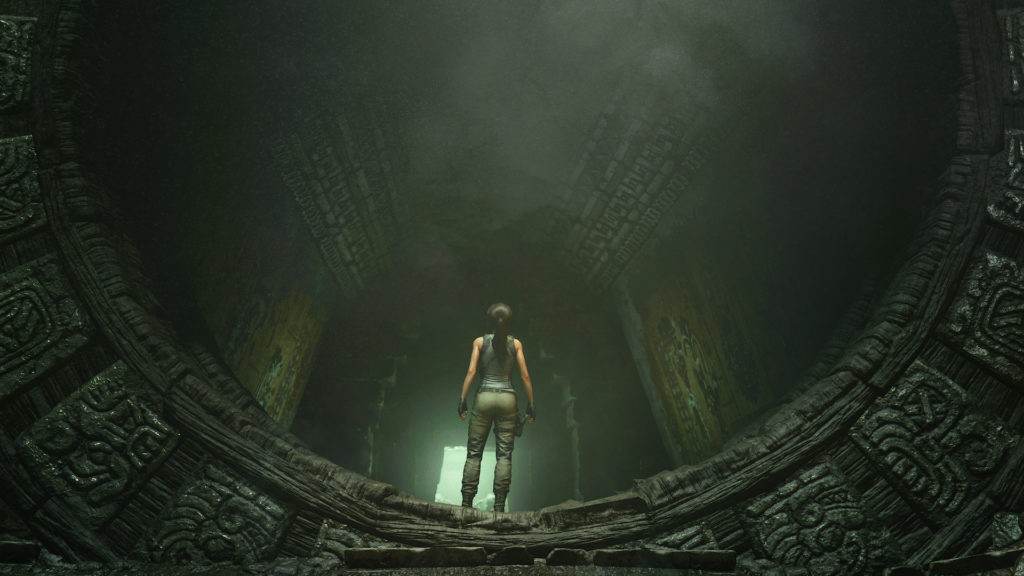 A lot of exploration, a few enigmas, too few gunfights: this sums up Lara’s typical day. The game still uses camp-fires to allow players to unlock skills after leveling up. And, it is still possible to improve weapons by using resources picked up along the way and to craft objects useful for survival (best example: arrows). You could also spend your time picking up the multitude of collectible items spread across the map’s various semi-open zones.

And then there are the optional Tombs which expand Shadow of the Tomb Raider’s ten hours (approximately) of gameplay. While these optional Tombs were disconcertingly easy to explore in previous versions of the game, Shadow of the Tomb Raider’s Tombs promised to be more challenging to locate. They also promised to contain more challenging mysteries. However, this is not the impression you get after going through a few of the game’s Tombs. While they are, perhaps, somewhat less ridiculous and somewhat more complex, they still only take around five minutes to complete…even with all of the in-game help deactivated (it is worth mentioning that you can set the game’s combat, exploration, and puzzle difficulty levels independently of each other).

Finally, Eidos Montreal saw fit to include a number of secondary missions in its game. These missions have the virtue of being well-written and are not as boring as the game’s other auxiliary tasks – not really surprising since this type of secondary mission has been a part of all of this trilogy’s games.

Shadow of the Tomb Raider: In short

In the highly repetitive Shadow of the Tomb Raider, Lara Croft appears to be out of ideas and out of breath. The end result is a game which, while far from being unpleasant to play, is not sufficiently original (compared to the 2013 reboot) to be truly memorable.

Eidos Montreal can’t be faulted for wanting to follow in the footsteps of its predecessors; it found itself in the unenviable position of attempting to respect another game studio’s artistic vision while, at the same time, leaving its own mark. However, in its effort to preserve the existing storyline, Eidos Montreal’s game comes across as repetitive…perhaps Lara’s destiny had already been too well-defined in previous versions of the game.