Since the GS60 and GS70 were launched in early 2014, the GS lineup has been the perfect example of ultra thin gaming laptops.

With the GS65 Stealth Thin, MSI is exploring an idea that is quite overused in multimedia laptops, although it is actually quite new in gaming laptops because it reduces bezels as much as possible to get a smaller chassis. For example, this is what ASUS and Dell do with their ZenBook and XPS lineups, respectively.

The laptop is slightly different from the MSI GS63VR, which was the only 15.6-inch GS model so far. The MSI GS63VR also has an independent numeric keypad, which the GS65 lacks due to its small size.

Instead of the striking red details found on most gaming laptops, MSI has decided to go with a subtler design for the GS65. Although it has the typical black finish of the GS lineup, the GS55 also has elegant golden details on the exhaust vents, the hinges and the lid, which has a golden line around it and rocks the Gaming Series dragon logo in the same color.

Although MSI is using the word “thin” for the model’s name, it is actually not any thinner than the aforementioned GS63VR Stealth, which is 17.7 mm think (according to the manufacturer). Its weight is also very similar (both models weigh 1.8 kg, according to MSI).

The GS65’s biggest downside is that the chassis is not sturdy enough. Despite being made entirely of aluminum, it somewhat tends to bend under focused pressure, which happens both on the lid and the keyboard area.

It is worth mentioning that the camera is above the display and not below like in a lot of models with thin bezels like this one.

The laptop’s hinge system is the only part made of plastic and allows us to fold back the display 180º. The design keeps the display in its place while using the laptop as usual, but it cannot prevent the display from moving if we use the laptop in unstable places like moving buses or trains.

The GS65 is one of the first laptops to feature the new 6-core 8th-gen Coffee Lake processors (or 9th-gen if we take into account the Kaby Lake R), which are much better in terms of performance than the 7th-gen Kaby Lake processors.

The laptop has a 6-core Intel Core i7-8750H at 2.2 GHz, which scored twice as much as the old Core i7-7700HQ in the multi-core Cinebench R15 benchmark (over 1000 points). Such score means the laptop is able to perform advanced tasks in the most demanding ways.

We are still talking about all the new MSI models, which is taking longer than I would like due to the amount of available information. Now it is time to talk about the MSI GP73 Leopard, a 17.3-inch gaming laptop that has a Coffee Lake processor and an NVIDIA GeForce GTX 1050 Ti or GTX 1060 GPU, placing it between the popular MSI GL73 and the great MSI GE73 Raider.

This new laptop is clearly based on the MSI GE73 Raider. Its external design has a black surface with an elegant brushed finish on both the keyboard area and the lid, while the bottom case and the screen bezels have a smooth finish.

Just like the GE73 Raider, the GP73 Leopard’s lid has a striking wavy finish with two oblique lines that frame the backlit Gaming Series logo. In contrast, the red lines on the lid are shorter than those found on the GE73 Raider’s lid.

The GP73 is relatively bulky. It is 32 mm thick, but it does not seem to greatly affect the laptop’s weight, which is quite light (2.7 kg) for its size.

I am being told only the lid of the laptop would be made of aluminum, a material that does not seem to make the lid sturdier in this case because it will clearly bend under focused pressure. In contrast, the keyboard area feels more durable and sturdier despite being made of plastic.

The hinge design is so firm that it does not allow us to open the laptop with a single hand. The design keeps the display in its place while using the laptop as usual, but it cannot prevent the display from moving if we use the laptop in unstable places like moving buses or trains.

You must admit that MSI pulled off an impressive feat of engineering by fitting so many keys on its new mechanical Vigor GK80 keyboard. Glancing at its aluminum-profiled base, you are sure to notice its 16 cleverly-situated additional function keys. 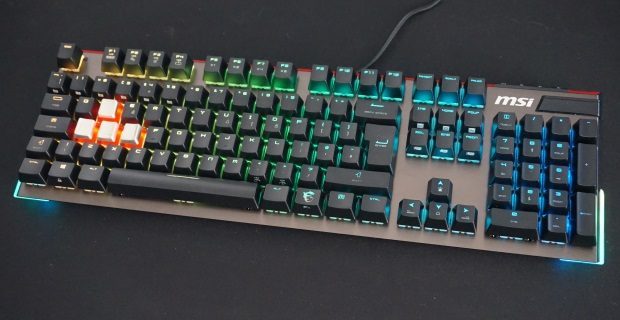 This is not including the four dedicated multimedia keys located in the upper right-hand corner or the 8 normal additional function keys located alongside the Fn keys. For a keyboard measuring 445 x 141 x 4 mm, this is quite an impressive technical achievement. But what’s the use of having so many keys? Except for a volume knob, this keyboard has all of the controls you will probably ever need – regardless of your intended use.

Gaming laptops have evolved to such an extent that it is possible to have models as thick as an ultrabook while also being more than powerful enough. However, if we want the maximum performance available for a laptop, we will have to forget about gimmicks and go for devices on which their lightness or compact sizes fall into the background, like it happens with this MSI GT75VR Titan Pro.

This devices is a gaming laptop in all the sense of the phrase: a device on which the most important things are performance and specifications, and on which it does not matter if it is 5 cm thick or weighs almost 5 kg. What matters is its performance and for it to be able to cool everything seamlessly. Theoretically speaking, this is a promising device due to its Core i7-7820HK, its GTX 1080 and its 17.3-inch 4K panel. 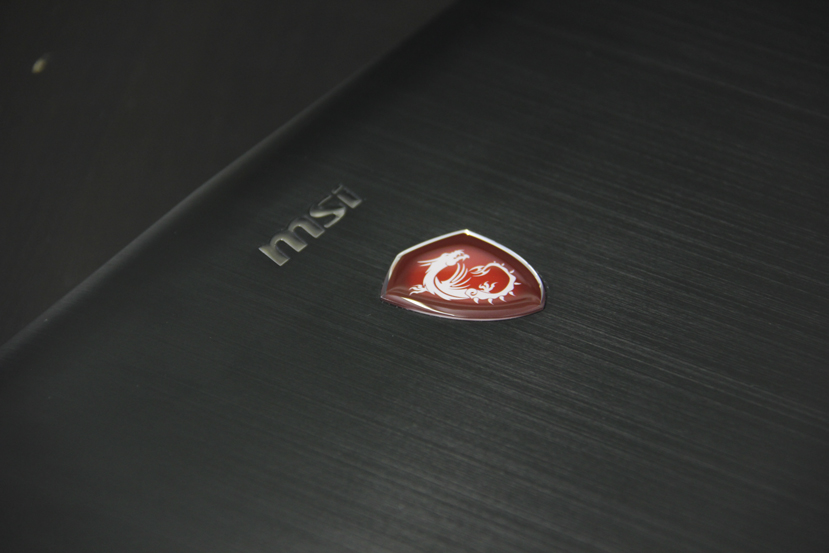 Let’s see what the MSI GT75VR Titan Pro is capable of.

We can tell you right now that this is not an ultrabook nor does it pretend to be one, and we will not be looking for a sober or elegant design, as this is a striking laptop in terms of size, power and design, of course.

For any passionate gamer this is device is a worthy companion, especially for LAN parties. If you already have a Haswell or Skylake powered desktop chances are that you won’t need an upgrade anytime soon. Laptops are another story, altogether.

The Intel 7th gen Kaby Lake and Nvidia Pascal shines really in the mobile computing market. Budget laptops are performing better with power efficient processors in them. MSI GL62M has hit the sweet spot by choosing all the right specs to provide the best gaming performance at the lowest price. 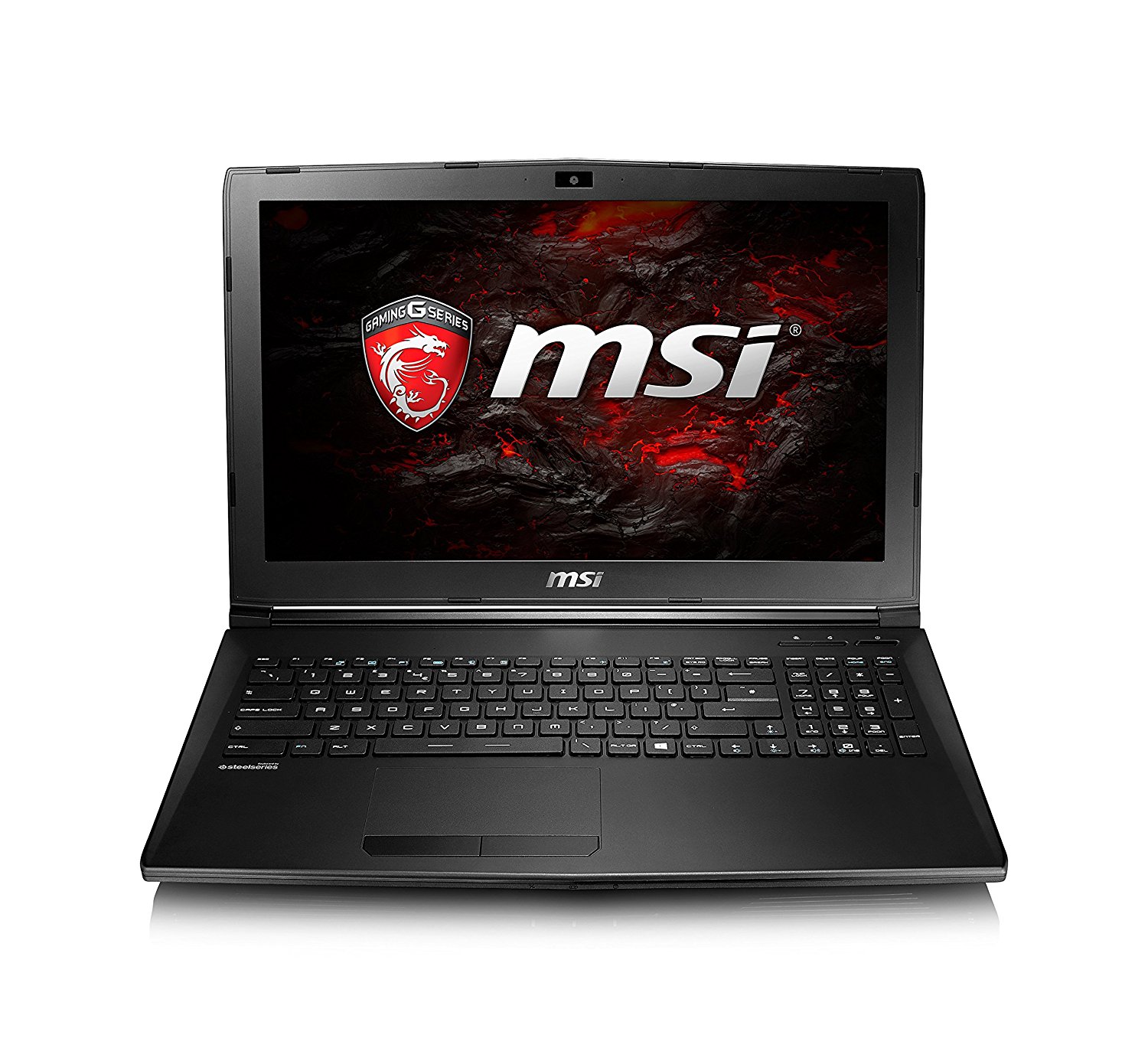 For CPU, we have an i5-7300HQ which is a 4-cores/4-threads processor 6M of L3 cache. This is a standard laptop CPU that can handle most workloads without any hiccups with 2.8GHz of clock speed which can turbo up to 3.5GHz. Complementing this is 8GB of DDR4 memory at 2400MHz. If you are seeking to upgrade the RAM, it is not going to be easy, swapping the memory stick could take some time and effort and is not designed specifically for easy access.

With its Apache Pro GE72VR, MSI is introducing another new gaming notebook outfitted with the newest hardware to its lineup. Inside we find a current generation Intel Core i7 processor, an Nvidia GeForce GTX 1060, 16 GBs of RAM and a lot of storage space. This configuration is sure to guarantee high FPS and a smooth gaming experience. The gaming happens on a 17,3” Full-HD display and the SteelSeries keyboard with its programmable backlighting which is typical for MSI. 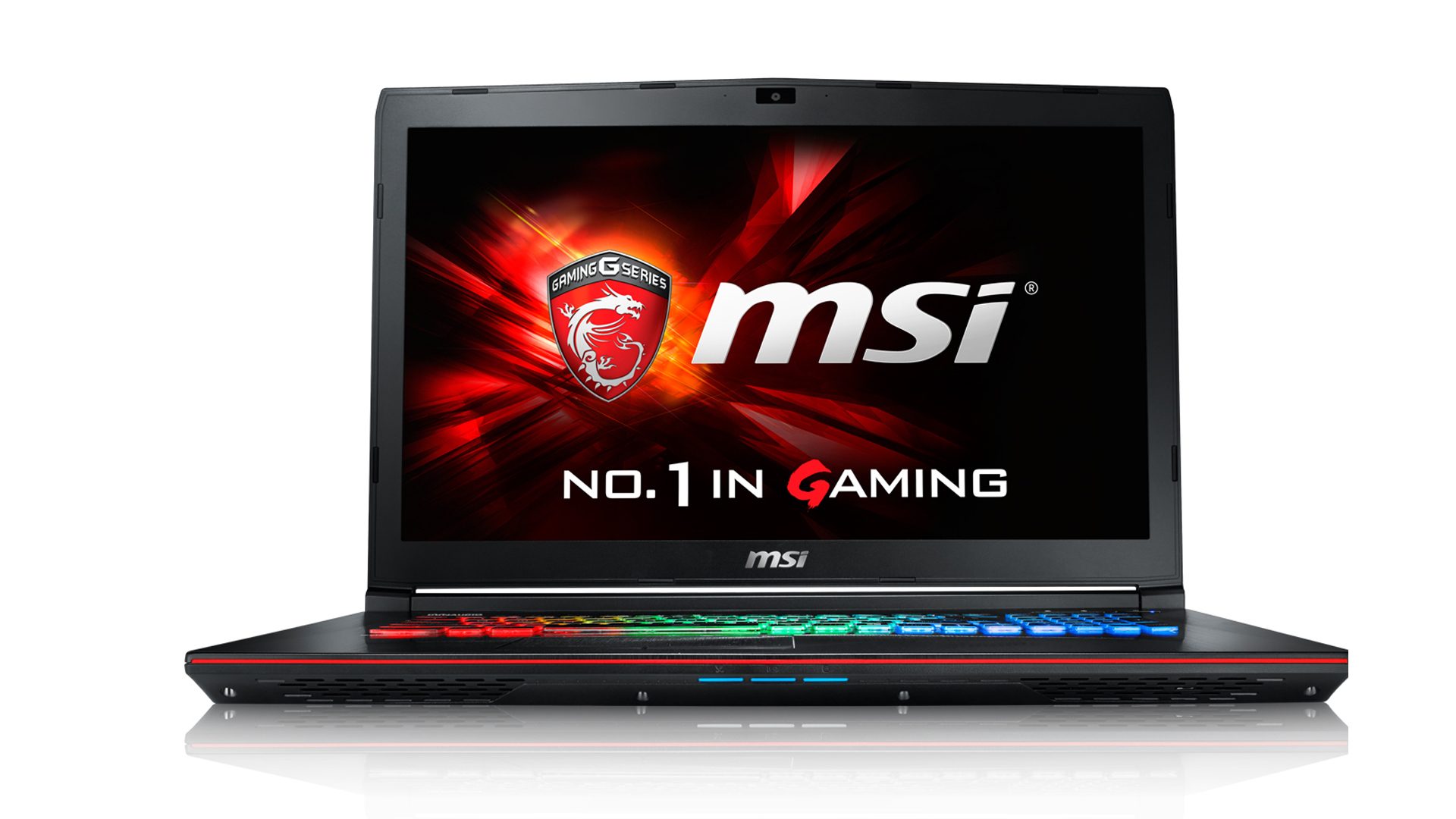 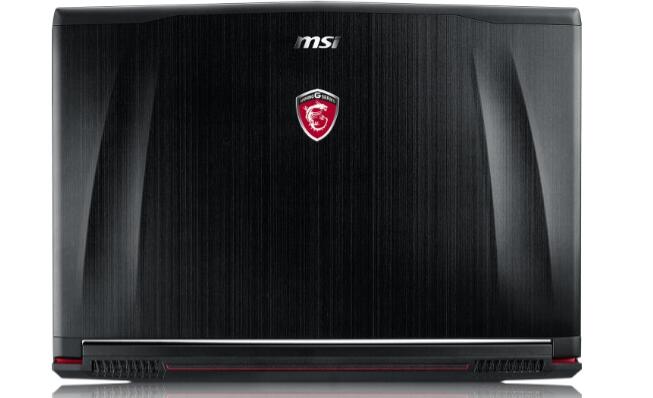 This MSI gaming notebook sports a large 17,3” display with Anti-Glare coating and True-Color-Technology. The Wide-View-Panel also allows for very good viewing angles. It offers a 1920 x 1080 pixel (Full HD) resolution and an average brightness of 244cm/m2.

MSI is keeping up the good work in its gaming laptop sector by updating its various models with the latest developments announced at CES 2017. This means that we can expect the arrival of models with the newest Kaby Lake processors and the GTX 1050 and 1050 Ti mobile graphics cards. These new models also bring something more than CPU and GPU performance to the table.

There is a new line aimed mostly at gamers, the GE72MVR, GE62MVR, GE72VR, GE62VR, GE72 and GE62 series as well as the GP and GL series (I had the opportunity of trying out one of these units, the GE72 7RE Apache Pro). In the classification of processors, Kaby Lake is a step up from the competition with a 10% increase in performance compared to previous versions. What is even more interesting are the new graphics cards: the GTX 1050 and the GTX 1050 Ti which come with 2 and 4 GB of VRAM.

While the general PC market is not going through its best times, gaming oriented hardware is thriving with new needs emerging in the form of massive online competitions or the rebirth of virtual reality, and in this market gaming laptops have a very special niche.

MSI has been working hard in recent years to become one of the crucial points of reference in PC gaming. All this work has paid off as recently they have become the number one gaming laptop manufacturer in the world beating with a market share of 19% to its main rival ASUS, which was left behind with 15%. 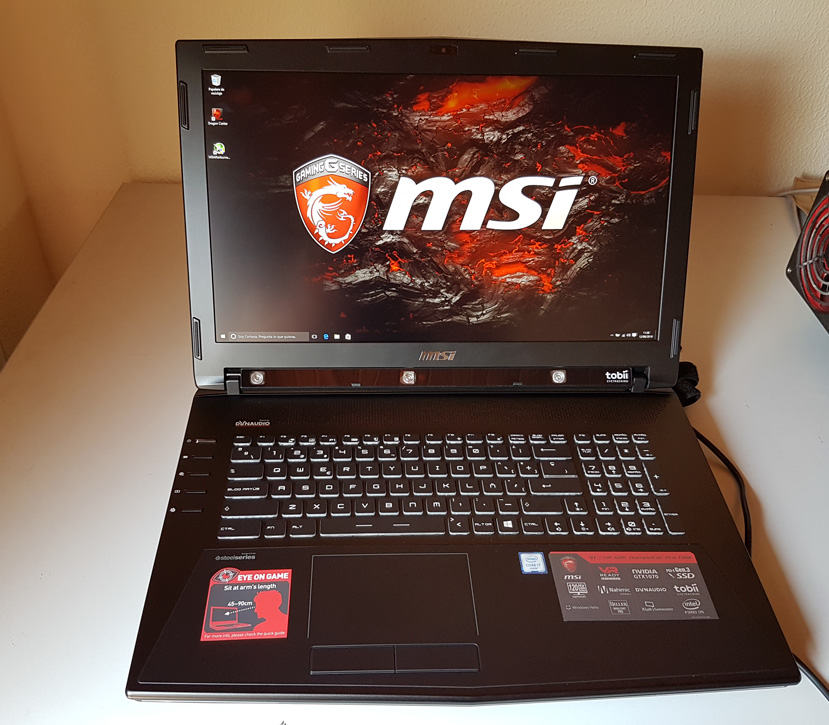 Staying on the crest of the wave ain’t easy so the company keeps launching new models with the latest technology on the market, and today the latests are the new NVIDIA Pascal GPUs for laptops like the GTX 1070 that the company has integrated into the GT72VR 6RE Dominator Pro Tobii that we will be analyzing today.

By using the award-winning heat-sinking design Twin Frozr VI with its magnificent cooling capacity, the advantage accomplished is just amazing, as a result it allows the Z Gaming graphics cards really high clock speeds for both the nucleus and the memory. An entirely new design custom-printed circuit board works with Military Class 4 components with an 8-pin connector in addition to the usual 6-pin to allow a higher overclock performance in order to give the maximum performance to this great graphics card.