Simple to install and very comprehensive, the Orbi RBK50 is a very powerful WiFi networking solution. In the course of our testing, the Netgear system managed to cover a particularly complex, 120 m2 area (thick walls and several stories) while providing high bandwidth. At the moment, the Orbi is one of the best solutions available for improving WiFi coverage. If that is, you are willing to pay the price. If you find its price to be too high, there are other, less powerful, but just as comprehensive solutions available, such as Netgear’s RBK40 and 30.

Have you ever been frustrated with your WiFi network? Weak signal strength or the loss of signal altogether are frequent problems in this era of wirelessly connected homes. It is something of a paradox: people have never had as many connected devices as they do now, but all of these devices are more or less dependent on the often unpredictable behavior of our WiFi networks. In the USA, more than anywhere else, the source of this kind of problem is readily identifiable: Internet Boxes. Practical in many regards, they often use bottom-of-the-line components – especially in the circuits dedicated to managing connectivity.

As a result, any walls or floors separating one of these Internet Boxes from its users will often be enough to prevent its WiFi signal from being accessible throughout the users’ home. Is there a solution? Yes, there is: forego your Box’s built-in WiFi signal in favor of a router or “mesh”. More highly developed and stable than PLC systems, mesh technology is becoming very popular – to such an extent that Google has even introduced its own router: Google Wifi. At the other end of the spectrum, there is Netgear, the specialist in the field of WiFi routers which counts the Rolls Royce of routers among its products: the Orbi RBK50. We tested the Orbi system out for a few weeks and we must say that we were impressed with the results. 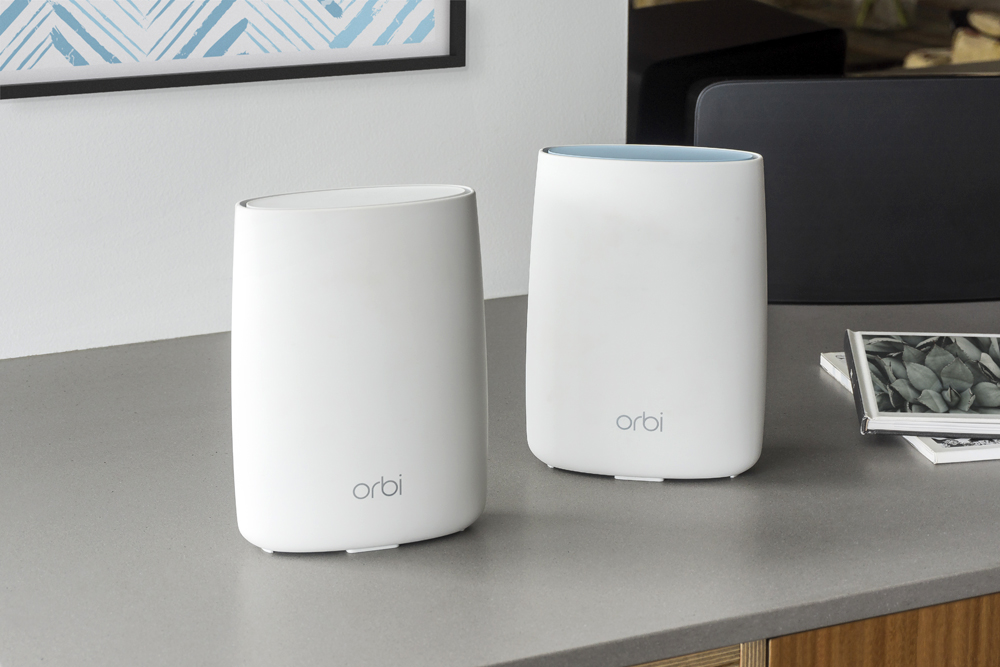 We really didn’t expect it from Netgear, but this manufacturer – well known by computer services departments everywhere for specializing in network hardware, did its utmost to facilitate the installation process of its Orbi equipment. The RBK50 is really very easy to set up: it includes two separate modules which are almost identical in appearance. The first is the router, the second is a satellite device. You will need to hook up one of the modules to your home’s Internet Box and place the other module in another room. The two devices communicate with each other via a dedicated network, there are no wires to hook up and no configuration to perform – everything is automatic. An LED informs will inform you about the state of the connection between the two modules. All you have to do is connect to your new WiFi network.

Some users will not go any further than this point since it is possible to use the WiFi network once a connection has been established between the modules. However, stopping here would mean not taking advantage of the full range of functionality offered by the Orbi, functionality for which users are expected to pay a high price.

And for good reason; in terms of home networks, the Orbi is capable of doing just about anything: dedicated network, guest network, WEP configuration, parental control, VPN, dynamic DNS, etc. Its possible uses are so numerous and its interface is so confusing, that it is easy to get lost sometimes. 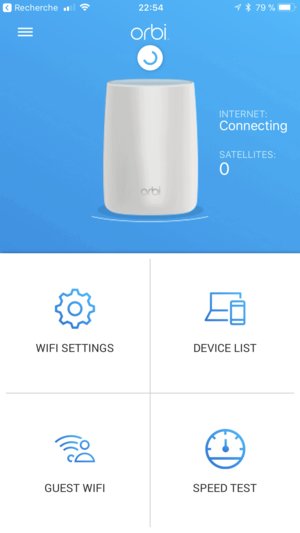 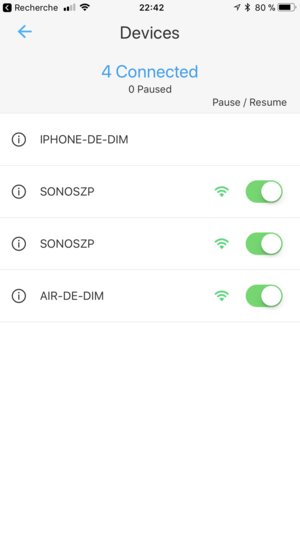 A good portion of its functionality is reserved for skilled users who are not afraid of entirely immersing themselves into the device’s interface. It is regrettable for instance that the device does not initially come set with Bridge Mode enabled. It is up to the user to make this adjustment which can help to prevent potential DHCP conflicts. This adjustment, as most of the Orbi’s adjustments, must be made via the web browser interface. Undoubtedly one of the potential improvements that Netgear could make is to grant more control over the system to its application. 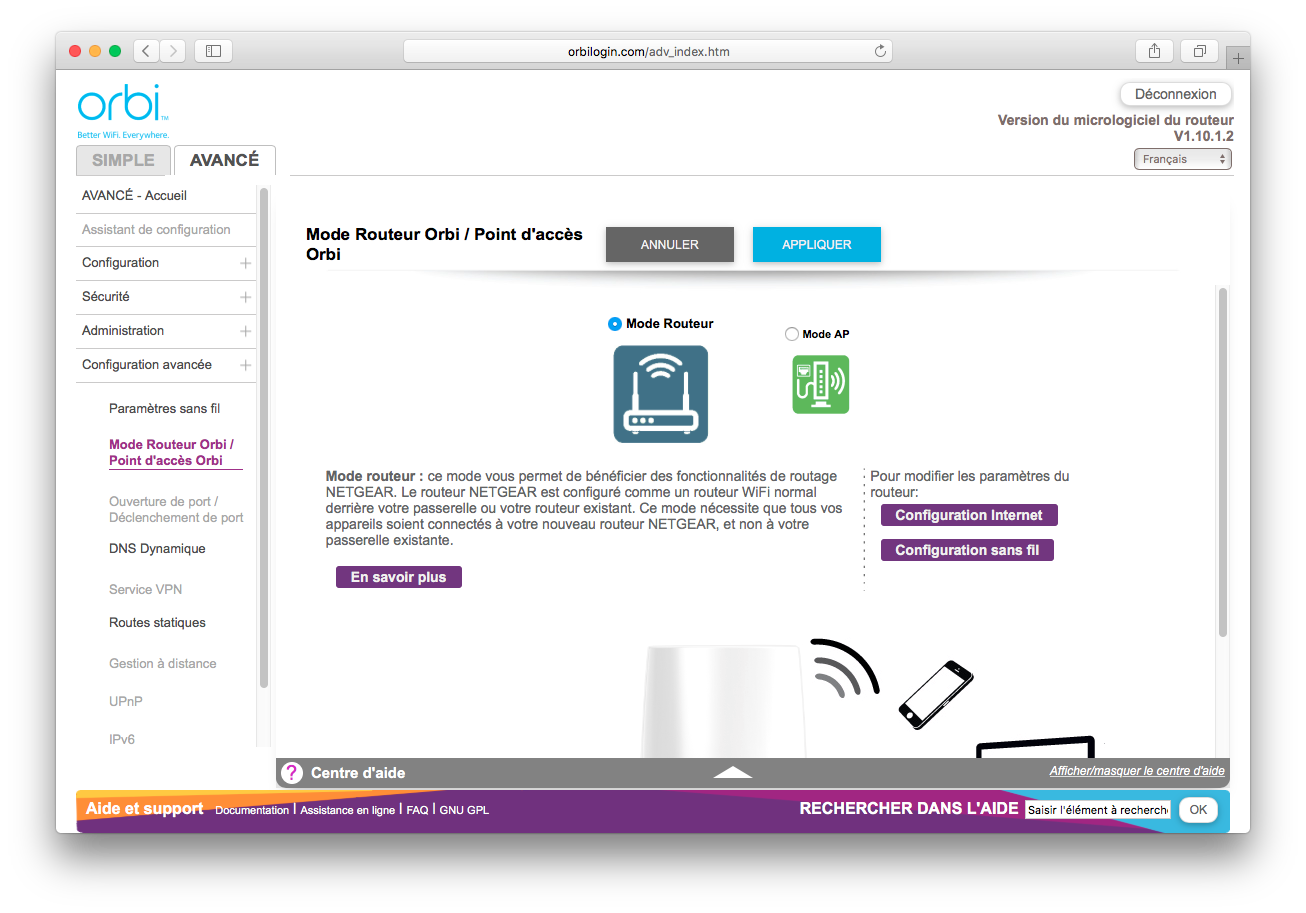 The WiFi mesh system is really quite effective when it comes to increasing the WiFi coverage zone! By using special protocols for communicating between access points (the principle behind a network mesh), it is able to considerably improve WiFi bandwidth. In practice, in addition to the usual 2.4 and 5 GHz frequencies, the Orbi uses a third 5 GHz channel, exclusively reserved for communication with its satellite devices.

With our – highly complex – test configuration, we were able to achieve a maximum bandwidth of between 600 and 700 Mbit/s. Our “test house” has three stories (one mezzanine). It is constructed from millstone and has fairly thick walls (around 80 cm) which are, generally speaking, a nightmare for WiFi propagation. As a matter of fact, with our Box SFR Power Box Plus, placed in the main room on the ground floor, it was impossible to provide WiFi coverage to the entire 120m2. To be more precise, the WiFi signal could not be captured on the top floor and the bandwidth available on the mezzanine did not exceed 10 Mbit/s.

After installing the two Orbi modules (the router in the living room next to the Box and the satellite device either on the top floor or the mezzanine), the difference could be clearly seen. For starters, we were able to acquire a WiFi signal in any room in the house and even in the garden – more than 20 meters away from the house. In terms of bandwidth, it varied depending on the distance from the router and the placement of the satellite device, but it never fell below 300 Mbit/s and flirted with a bandwidth of 700 Mbit/s in the best possible configuration. 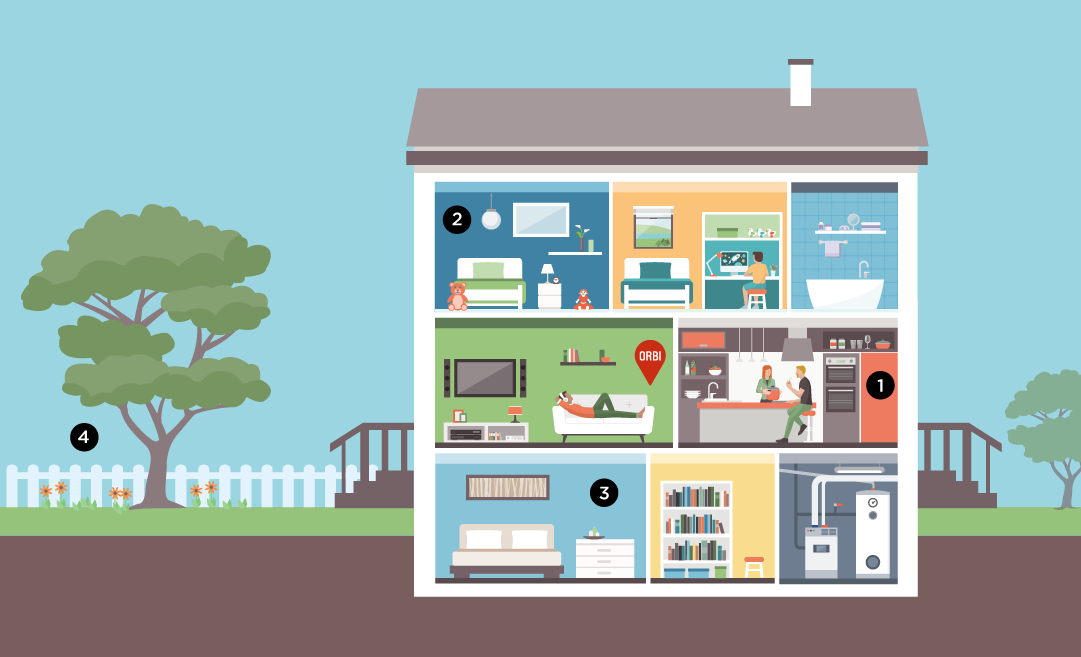 – With the router placed in the living room on the main floor (red on our diagram), the following is a list of the average recorded bandwidth with the satellite device place on the top floor or mezzanine.

The satellite devices are not just for show

Most WiFi Mesh solutions consider the satellite device to be a “necessary evil”, something that you will have to find a place for and that has no use other than to allow the system to operate correctly. In some cases, manufacturers endow these satellite devices with some additional features, the most common of which are Ethernet ports. The Linkys (Velop) and Google systems have two ethernet ports, but that’s about all they have.

Orbi has taken this trend a little further; in addition to offering 4 Ethernet ports on its satellite devices, they are also equipped with a USB 2.0 port. This is especially useful in an office or game room setting which may be located far from the internet Box. It is this kind of small detail which makes the Orbi RBK50 so successful.

In the end, after a few weeks of testing, we are hard-pressed to find any faults with Netgear’s WiFi mesh system. Its main objective is to provide a quality home network and it satisfies this goal completely. Using the RBK50 for our particular test configuration could seem like overkill (since Netgear claims a coverage area of 300m2 for its high-end device). That is why, for less complicated configurations as well as for smaller spaces, Orbi also offers less expensive solutions – RBK30 and RBK40 – which provide smaller coverage zones.