Test of the Logitech Key-To-Go: the rugged portable keyboard

Having a tablet is good, but being able to use it as a veritable portable PC is even better. More tech-savvy users will already be aware of the fact that it is possible to connect any Bluetooth keyboard to their Android device. Many Bluetooth keyboards, while being practical, are not very mobile. Logitech has just started marketing the Key-To-Go, a very thin-profiled and lightweight keyboard which is also hermetically sealed and offers a very comfortable typing experience. 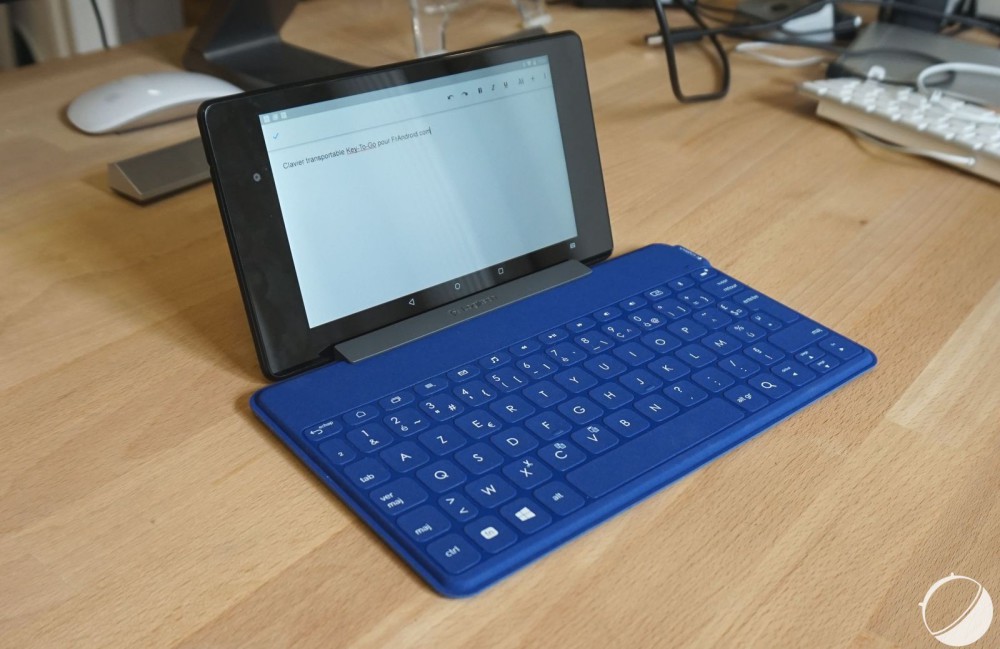 A compact and comprehensive keyboard

This small keyboard is not really an innovation, in fact, Logitech already released an earlier version last year which was exclusively reserved for Apple devices. The Key-To-Go, which we were able to test, is slightly different in the sense that it is compatible with both Windows and Android devices. Therefore, it has shortcut keys specific to both operating systems. The Ctrl, Alt, Fn (function) and Windows keys are clearly visible among the lower keys; the Android home, back and multitasking shortcut keys are to be found among the top keys on the keyboard.

I only tried the keyboard out with an Android tablet, but it is worth noting that all of the keys, even those dedicated to the Windows operating system are at least partially functional on Android devices. Pressing the Windows key, for example, launches a search (written or oral) with Google Now, and the music key launches Google Music. Just a few words about the installation procedure: all you need to do is pair your smartphone or tablet with the Logitech keyboard by entering into your device’s Bluetooth settings.

One of this keyboard’s strongest points is its design. It measures 24.2 cm in length by 13.9 cm in width for a thickness of 6 mm and a weight of 180 grams. The Key-To-Go may be small, but it is still sufficiently large to be able to place both of your hands on it without feeling cramped. Its extreme thinness makes it very easy to transport: you can slide it in between a few items of clothing in a suitcase or carry it in your backpack with ease. There are very few other portable keyboards which are as compact as the Key-To-Go.

Logitech also made use of special materials to allow the Key-To-Go to be hermetically sealed – or at least splash-proof. I didn’t test the keyboard out in my bathtub or pool (I don’t recommend that anyone do so), but I did notice that when water runs over its surface, the water slides right off its hydrophobic coating without damaging the keyboard. The downside of this water or coffee resistance is the keyboard’s peculiar, cushiony feel and its tendency to attract dust. The keyboard’s surface is soft but not as smooth as that of a conventional desktop keyboard; it definitely takes some getting used to. 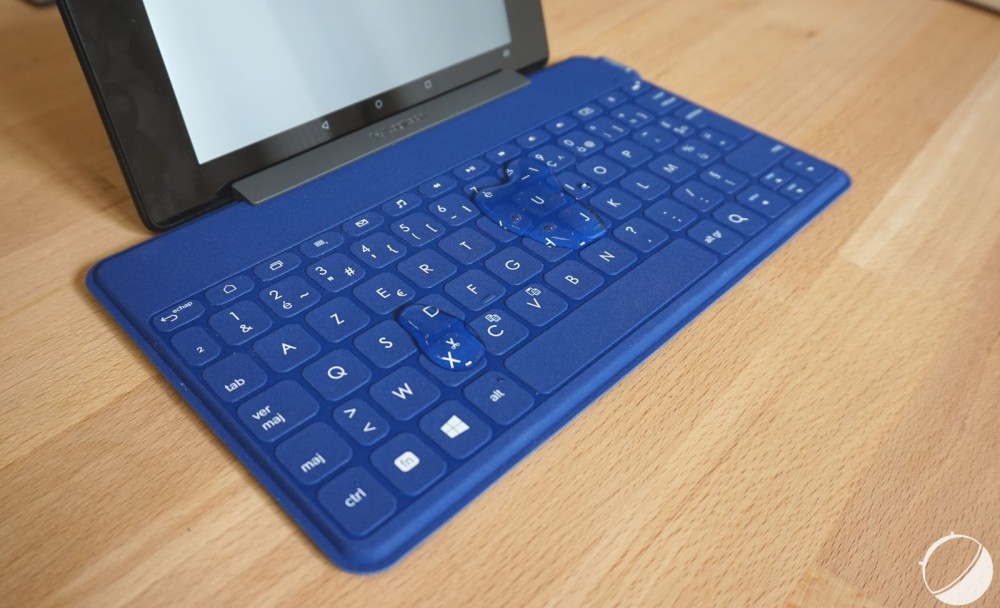 Water slides over the keyboard’s surface and is never absorbed by the coated surface.

So, how comfortable is it to type on? Perhaps the most surprising thing about this keyboard is how pleasant it feels to type on. Despite only being 6 mm in height, the travel of the keys can be clearly felt. The travel is, of course, very limited, but each distinct keystroke can be clearly felt. The Key-To-Go really gives the impression of typing on a keyboard rather than on a flat surface which is what you might expect it to feel like at first glance. After having written a portion of this article using the Key-To-Go, I am convinced that I would be able to work and even write quite long texts using this keyboard almost as quickly as I would be able to do on a conventional keyboard.

The spacing of the keys is excellent, the right Shift key is wide enough to never have to be searching for it with your finger; I got my bearings using this keyboard in a matter of minutes. I only have two negative things to say about the Key-To-Go. The first is the keyboard’s lack of an LED to indicate when the Caps Lock key is engaged since Android devices don’t display this information on the screen. The second negative point is more of a regret than a fault: if the Key-To-Go had been equipped with a trackpad of any kind, even a tiny one, it would be the perfect keyboard. For making modifications to a text document, nothing beats using a pointer instead of keystrokes. 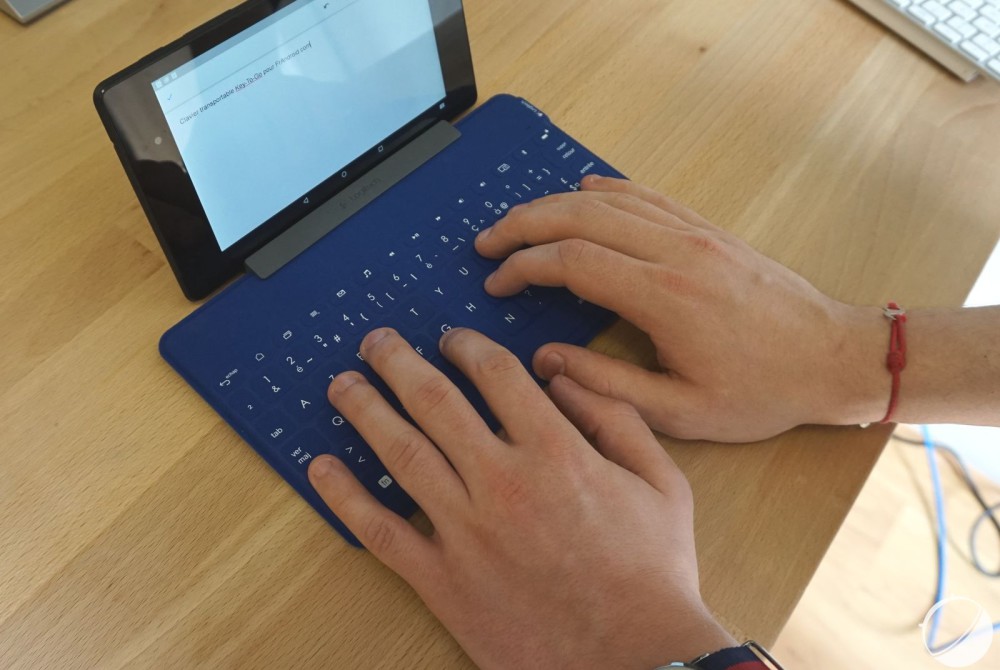 The Key-To-Go has enough length and width to be able to place both of your hands on it without feeling cramped.

The Key-to-Go is equipped with an internal battery of unknown capacity. The official website claims a battery autonomy of three months – something that I was not able to verify. At any rate, it is recharged via a micro USB port located on the right-hand side of the keyboard, next to the power button (which are probably not hermetically sealed). The keyboard is sold with a small plastic support for holding smartphones and small tablets. While this support works well for the Nexus 7 for example, it is unable to support the weight of heavier devices.

The Logitech Key-to-Go is being sold for 69.99 dollars, which is rather expensive and is only available in either black or blue. Moreover, it is sold without any protective cover and its installation manual is very (very) limited. Nevertheless, in our opinion, it is still one of the best devices of its kind.