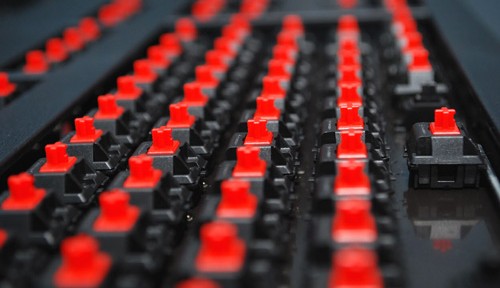 Today we will begin analysing a feature that belongs, in a crucial way, our mechanical keyboard that the gaming passionate already know it very well: I am talking about the switches MX blue, brown, red, black and clear that are all products on a large-scale coming from the Cherry company that owns the rights of them.

The major part of us could consider the differences between the different types of mechanical switches meaningless, but who uses keyboard for working typing in for many hours a day has different thought about it.

These people are well aware about how much these little precautions can improve the comfort when typing and, inevitably, this mainly depends on the type of switches that are used.

We often ask to ourselves “What’s the most suitable switch for gaming, programming or for simply typing in?”. The answer is simple because there is not one. A perfect switch for a determined type of users doesn’t exist, there only the switches on the basis of personal preferences and subjective suggestions.

The most common cherry MX switches are the ones of a Blue type that occupy about the 32% of the market, followed by the Brown ones with their 29% and then there we have the Red ones with a 17% and Black ones with 10%, the Green and White version are not that common or have got a few and particular keys inside the Blue and Red keyboards.

Now, we go on analysing the specifications of each type of keyboard, getting the main characteristics out for each one of them, benefits, drawbacks of usage.

This type of switch is considered the fastest and the most tactile one but, also the noisiest one because of the solid resistance that it applies when we push it. The feedback that it has indicates that it is really suggested for typing in.

On the other hand, it also has some drawbacks of lasting less than the other types of switches and be a bit deleterious for the very close pressures of the keys because of the point of release that is put over the key of activation as we can see in the image below.

Let’s list up some of the particular versions of the MX Blue denominate MX Green, heavier than the original one and they are used for the spacebars, and the MX White that are very similar to the Green ones but they have a more soft click.

Let’s move onto the second type of switches that are brown. They are less noisy and it can be triggered more easily than the Blue ones.

They don’t produce the characteristic feedback of the Blue version but they guarantee more resistance to the medium point.

These switches are optimal for long periods of typing in and for most hardened gamers, they have points of release and activation at the same level( see image below) that will let gamers have constant and efficient pressure of the keys

The Red version of the cherry switches is of a linear type and this means that the power at the beginning and at the end of the race is basically the same. These keys last longer than the others and they seem to be optimal for gaming as the points of activation and release are on the same level like the Brown ones(see image below)

The switches of the black type are very similar to the Red ones: they are of the same linear type and the position of the points of release and activation is the same and so is the long duration. The difference can be found in the power of activation that is heavier than the Red ones: this is a very good fact given that it prevents us from pressing buttons accidentally that for gamers is of a fundamental importance.

Also, there are two types of less common switches that are similar to the MX Black and heavier (sometimes used for the spacebars) and MX Super Black, heavier and used in the past for particular keys, that is now out of production.

The MX clear version of cherry switches is a subtype of the MX Brown that behaves in the same way but it is different because it has got a wider point of pressure than the first ones and this is an appreciated featured by who uses the keyboards for typing in or gamers when it comes to keep keys pressed down for some time. Like all the switches of this type, this has a duration lightly shorter than the linear ones.

There is a version of this switch called “Mx tactile grey” that is slightly heavier and used for spacebars sometimes.