The Surface as a Desktop Replacement: How a Tablet Becomes a Stationary Computer 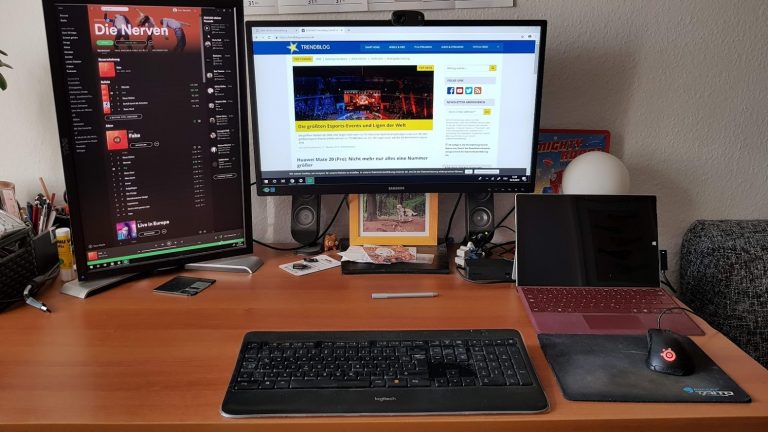 Flexible, mobile, and always with you: a tablet like Microsoft’s Surface (Pro) could replace a desktop computer. We can tell you how.

It has been a possibility for a while, but sometimes we do not use ideas like this until a few years later. Microsoft offers the Surface Dock for its own Surface devices, which is a docking station designed for the Surface Book, the Surface laptop and the newer Surface Pro. For me, the Anschaffung would have been useful…

I love siting at my large desktop PC. I use two monitors – one in high-format positioned for Office, Mail or Spotify. The main display is used for “surfing the net” and research for work. This is the best system for me.

The only dumb thing is that the computer makes time fly by. After eight proud years, the once high-end gaming monster that I bought a few years ago with a fast SSD could no longer handle it. Right next to it, I use a Surface Pro 3 – which also is not among the newest technology anymore.

My motivations for using the Surface as a desktop replacement

What now? Buy a new one? I analysed…

The problem: I didn’t really want to fit a new tower into my home office, seeing as I do not really game much (on PC) nowadays and leave less hardware lying about the apartment. Ah, and I would like to save energy too.

The potential solution: I use my popular Surface Pro 3 as a replacement for the desktop computer. The tablet which was released some years ago still runs wonderfully and solidly equipped with Intel Core i7-4650U, 8GB RMA and 256GB SSD. 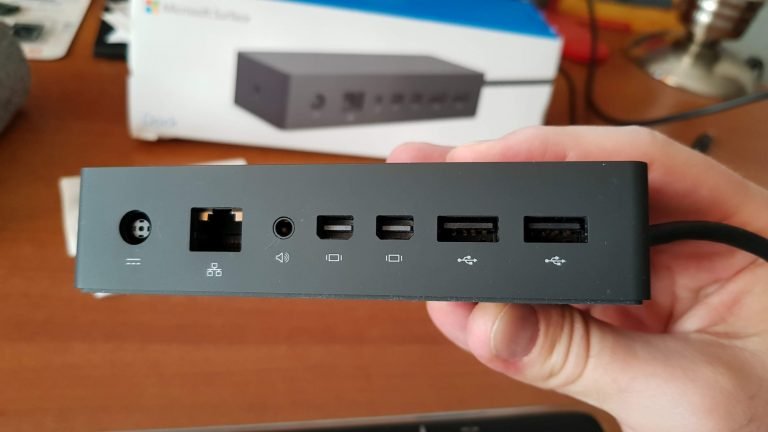 I need a Surface Dock to use the Surface as a replacement for a desktop computer. The advantage: You only need one computer for the office, on the go and free time on the sofa. Not a monster desktop, which is also relatively loud and uses up a lot more electricity than a Surface Pro 3.

In theory, anyway. How is it in practice, though…?

The Surface Dock as a connector

Sometimes it is better to not read online reviews. I did for the Surface Dock – and that did not seem promising. It was criticised for its high price, there were often problems with connections, WiFi and monitors. That is also a reason why I pondered about buying it for so long. In the end, I decided to risk it, because you can only use the Surface as a replacement for a desktop computer if you have it. 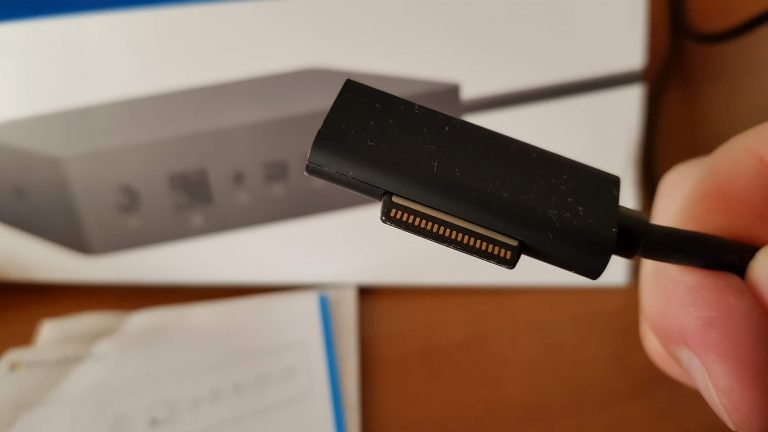 A connector brings a lot of new possibilities.

So reasonably, because the seemingly amazingly valuable and very heavy adapter (it is supposed to stand securely onto the desk) has more than four USB 3.0 (Type A) ports, an Ethernet port, an audio output (3.5mm) and – the deciding point for me – two mini DisplayPorts. A Surface Pro, on the other hand, only has one USB connector, 1x mini DisplayPort and a Surface Connect Port, which is used to connect the Surface Dock.

After seeing the difficulties some others went through, I was certain: I needed to add another two cables – from mini DisplayPort to the standard DisplayPort. They were not expensive either. And the rest? That’s self-explanatory: just plug in the dock with the network adapter that came in the box and connect it with said Surface Connect Port on the tablet. Connect the monitor cables, mouse, keyboard and loudspeakers to the dock – done. It doesn’t even take five minutes to do. 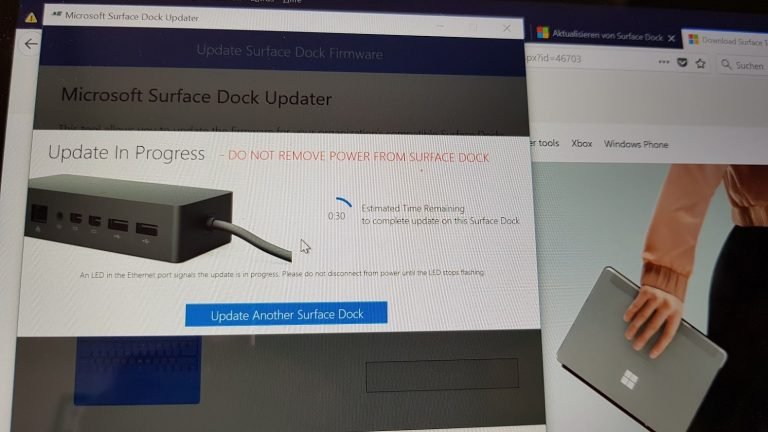 Obviously I had to update the Surface Dock as well.

As a tech-nerd, I updated the Surface Dock, and did so without a problem; but when downloading well-hidden software you had to use the English instructions. Synchronising is advised, even if it does bring back some difficulties of the past, such as WiFi interruptions on the Surface Pro 4. You can find more guidance for this on the Microsoft website.

Another aspect that had to be sorted right away was configuring the monitor. More specifically its location, resolution and text size. Including the Surface Pro, you can use up to three displays at the same time. I personally am content with my two large monitors, as I do not need a third one right now.

Although I have indeed been using my Surface much longer than my laptop and tablet, there was still a moment which surprised me. What was being presented to me on the two large monitors was all coming from my small Surface Pro 3? With just a few clicks I was able to navigate my desktop like I do on my desktop PC – Office, Mail and Co. here, internet browser and image editing there. Just like that?! 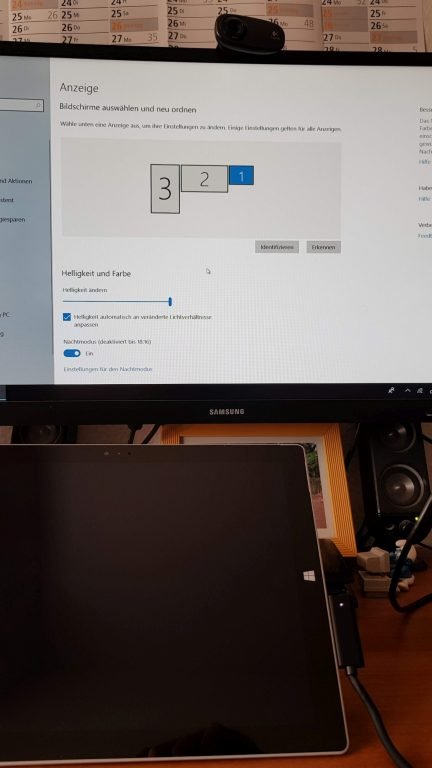 You can only order the displays in the monitor configuration settings.

Some little things were and are nice: if I disconnect the Surface Dock and turn it on again in standard mode on a display, then plug it back in, my desktop replacement is active – with all the devices I connected. That’s all I need really, it could not be any better. 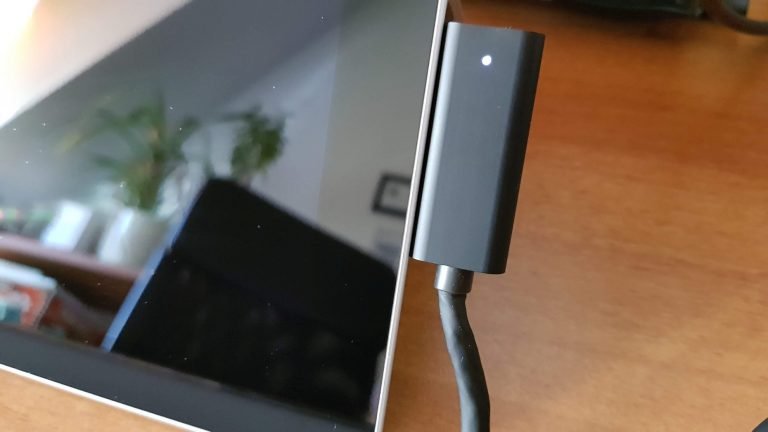 The connection is very stable.

Some stay sceptical (at first)

Based on simple tasks, such as surfing the net, sending e-mails, using Word or Excel and some PhotoShop, there are no immediate differences to my “big computer”. I am just starting out with this though and am taking time to find out whether a tablet like the Surface can really be the desktop replacement PC that I imagine it can be. For now, I have been pleased, but… 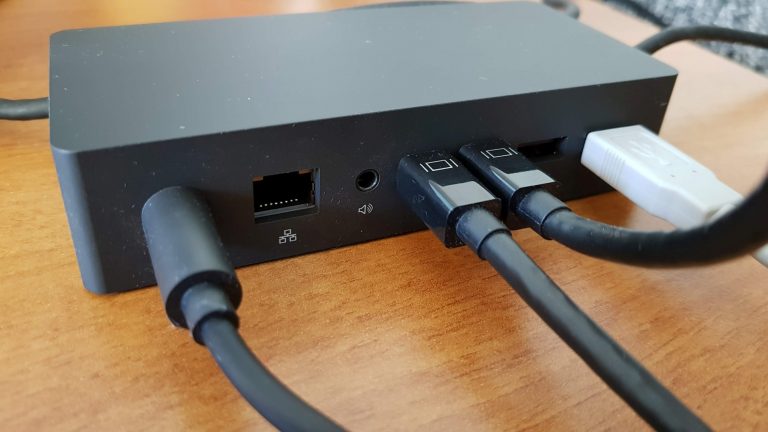 The ports are enough for everyday use.

But? My Surface Pro 3 has an active fan that gets really loud as soon as I have opened loads of browser tabs and am completing other tasks which eat up the memory and resources. Not that I “have to” get myself a Surface Pro 6 as well, which I have been pondering on for a while. At least there would be the argument of “saving money” by using the tablet I already have on the table.

Even then: I am very impressed by the solution. My tablet is my laptop and desktop at the same time. One device for everything. Docking and working at a desk as I have been for years now. And if I have to leave the office, I can simply take my last work stand with me. As for whether the performance is long-lasting, is yet to be found out. As a “creature of habit”, it will take me some weeks to slowly change over.

Do you already use solutions such as a tablet (or laptop) as a replacement for a desktop computer? I would love to hear about your experiences – in the comments below!