These are the best antivirus for Android (April 2016)

According to StatCounter, the Android operating system is the third used in the US, even being comparable with desktop systems like Windows. Therefore, it is increasingly the target of malware or phishing attacks, making it crucial that you choose a good security solution. Here are the best antivirus for Android, as of April 2016.

The security firm AV-Test returns with an updated of its ranking of best antivirus for Android, which includes the latest developments and changes of the major players in the business. Thanks to their research we can see the degree of protection or usability, i.e., the impact these applications have on the overall functioning of the device, disregarding the rates of registered false positives.

In 2015 alone, up to 84 million new threats were created, with spyware, ransomware and all types of malware booming. Windows and Android have been the most affected systems because they are the most used in the world, the first in the field of computers and the second in mobile. Therefore, we will review the findings of AV-Test to know which the best antivirus is for Android.

The best antivirus on Android

Let’s compile a list of the antivirus getting six points in the categories of protection and usability. Nevertheless, while providing a high degree of protection and low impact on system performance, each application offers a number of extras that can be key when opting for one or the other. 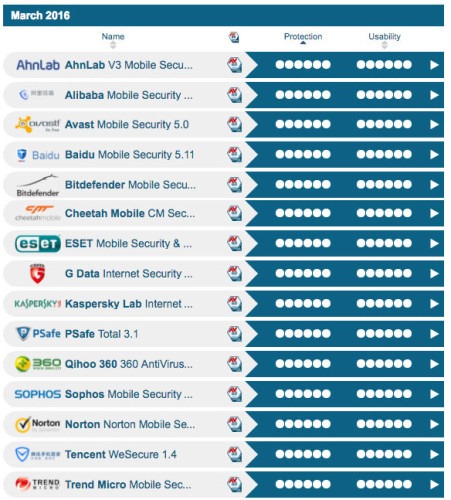