Virtual PBX vs physical PBX, which one is better?

Maybe many of you have previously heard about virtual PBX or cloud PBX, which is a technology that allows to interconnect phones in companies, or even homes, in order to cut their overall costs and keep maintenance to a minimum, allowing the integration of technologies such as Skype at the same time. In this article, we are going to see the differences between a physical and virtual PBX to determine which one is better in each case.

This was the type of PBX that was everywhere until a few years ago. Every phone was connected to a single device that physically distributed the phone lines (in the case of an office, for example). This means that we will necessarily have the physical PBX with its own power consumption, maintenance and all the necessary wiring to connect every phone that we want with a trunk line.

The advantage of this system is that maintenance remains little after investing in the devices and installing the wiring system, although it is true that it will become obsolete or get damaged over the years, prompting us to change it.

With a cloud PBX, a third party will take care of literally everything. It will provide us with a designated number and some phones that we will simply connect to the network to get Internet access, using the VoIP protocol to make and receive calls. Any modification or new setup is easier to do because we will not need new hardware or wiring making everything difficult, as any modification is in terms of software. 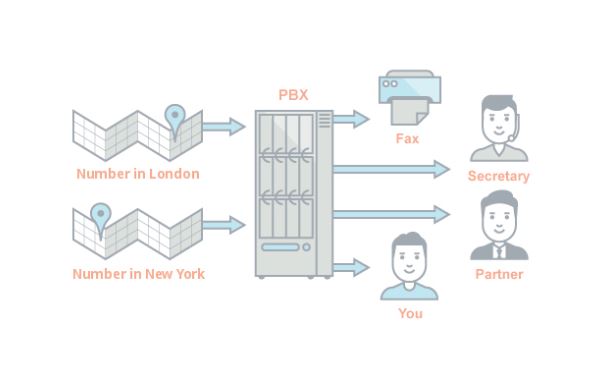 The downside is that if we lose the Internet connection for any reason (failure, a technical fault, a dying router, etc.), we will not be able to use the phone. However, most of the IP-PBX have the option to reroute the connections through the traditional phone if the client loses the Internet connection, so this is not a big issue either. By the way, in case you are curious, the bandwidth consumed by an office with 15 IP desk phone stations does not even reach 1 Mbps.

The advantages of a virtual PBX – Examples

Of course, there is a tendency to go for virtual PBX nowadays. This is evident because they provide us with a better integration and more versatility if something happens. They need no maintenance and we do not need to invest a lot of money upfront because we will simply pay the monthly fees that we agree to, and that is it.

For example, there are companies offering services that integrate phones with instant messaging products, such as Skype, Telegram or Facebook Messenger, meaning that we can get notifications for missed calls, SMS, voicemail, etc., in the same chat window. We can also integrate the PBX with other products like Skype for Business, which will allow us to even make calls from the PC.

Advanced, and some ‘free’, solutions

There are advanced and relatively free solutions (by this I mean that you set up the PBX and you can manage it for free, but of course you do have to pay for the designated telephone number and the calls that you make) like the one that Zadarma offers. It allows us to setup a virtual PBX through an easy process that takes no more than 5 minutes and even connect several offices within the same network.

A phone number will be designated to us under which we will have as many internal extensions as needed, therefore being able to make several calls at the same time and from the same number seamlessly. The PBX offers the possibility to even setup a call center if we wanted to, as it has integration with Bitrix24, AmoCRMand Planfix, and even the API interface for other systems.

As for final words, and except for the fact that we cannot use the phone if we lose the Internet connection, we prefer the cloud PBX (and that is why companies go for redundancy or similar solutions) because it is cheaper and maintenance-free, its modifications are quicker and easier to get done, and it offers great possibilities for software integration.

If you want more information, take a look at Zadarma’s website, which is the one that we used for the example.