We explain the new nomenclature of AMD graphics

You may have already realized that with the new generation of graphic cards, AMD has change their nomenclature once again, generating doubts and controversy among the users and even the experts as always. Therefore, the manufacturer has come to the rescue to explain the details of this new nomenclature that will be used from now on.

The new nomenclature that AMD is using in this generation of graphic cards is, as always, indicative if it’s known how to interpret. Coming up next we are going to explain it in the simplest way possible to leave no room for any doubts. In the explanation, we are going to take off from the next slide. 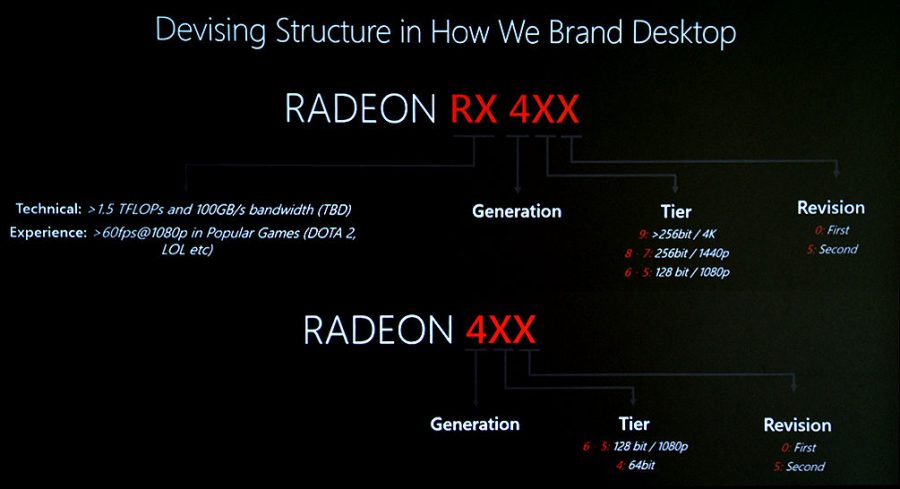 Keeping this in mind, the acronym RX that goes before the model number means that the graph has at least 1.5 TFLOPs of computing power and at least 100 GB/s of memory bandwidth. The graphics that AMD launches that doesn’t reach these values will dispense with the prefix RX, therefore and as we have seen in the web, AMD will use for these the usual Radeon R7.

Having said that, let’s go with the numbers. The 4 of the beginning represents the generation, because we are already in the fourth part of Graphic Core Next Architecture. The following number is the one that might cause more trouble, because it represents the graphics “level” keeping in mind the ideal resolution. This way, we have prepared the following list so that we can make everything more clearly as possible:

These have been represented pretty well by colleagues from VideoCardZ in the following table.

Finally, the last digit may be a zero or five. This means respectively if the graph is the first or the second revision of the same graphic chip on which it is based, neither more or less.

Therefore, we understand that the Radeon RX 480 is a graph of more than 1.5 TFLOPs and 100 GB/s of bandwidth, designed to use 1440p resolution, and this is the first revision of the graphic’s core.