What’s the Difference Between WiFi 2,4 GHz and 5 GHz?

Some of the most recent wireless routers and WiFi modem-routers are dualband, that is they let you set up two wireless independent networks that work on completely different frequency spectrums. The two WiFi networks, 2,4 GHz and 5 GHz, can generally work at the same time, so much so that each one have a different SSID with which it appears on mobile nearby devices.

Acronym for Service Set Identifier, the SSID is the name with which a WiFi network appears to its users. By doing a scan through a software like inSSIDer or even air-cracking, you’ll get the list of the SSIDs corresponding to the wireless networks available nearby, along with their features. By default, many routers use the name and the model of the device itself as SSID: it’s highly suggested to change it, even if it’s actually superfluous to block its spread across the ether (broadcasting) because the SSID of an hidden network could be found in a pretty simple way.

But what’s the difference between WiFi 2,4 GHz and 5 GHz?

The introduction of the 5 GHz band solves, firstly, the problem about the crowded wifi networks. In densely populous areas, apartment buildings, in areas with large presence of offices and commercial activities is actually something common, to find lots of WiFi networks, especially if you consider both the ones that reveal their SSID and the ones that hide it.

5 GHz band is usually preferable, so, when there are, nearby, many wireless networks working at 2,4 GHz. The 2,4 GHz signal has got the advantage to go over obstacles better, but it’s more subject to disturbances and interferences (WiFi networks nearby, cordless telephones, doors and automatic gates opening transmitters, other hardware products influence etc…).

The width of the channels being equal, WiFi at 5 GHz can also bring to an higher throughput (throughput can be described as the transmitted bytes number per unit of time, measured by given intervals).

To provide a wireless connection at 5 GHz, moreover, has the disadvantage about the reduction of the covering range: a WiFi network at 2.4 GHz, then, is able to cover an area that is basically wider, than a network working at 5 GHz. As told before, 5 GHz signal cannot pass through the objects efficiently, as much as the 2,4 GHz networks do: so home or offices areas, reachable by 5 GHz, are less wide than connection at 2,4 GHz.

As they let you use two frequency bands at the same time, most recent routers offer a wide choice to the user. So, it’s possible to think about keeping both modes enabled: at 5 GHz you’ll get better speed performances on shorter range, while at 2,4 GHz you’ll be sure to cover wider areas. In general, if the area in which you’re working or living isn’t particularly crowded in terms of wireless connections, it is possible to keep the WiFi connection at 2,4 GHz. We suggest to use of the mixed mode 802.11 b/g/n in order to permit the connection to every kind of wireless client device.

Dual band routers (which support, then, both the 2,4 GHz and 5 GHz bands), are always able to enable a wireless connection by using only (or also) the 802.11n specs. 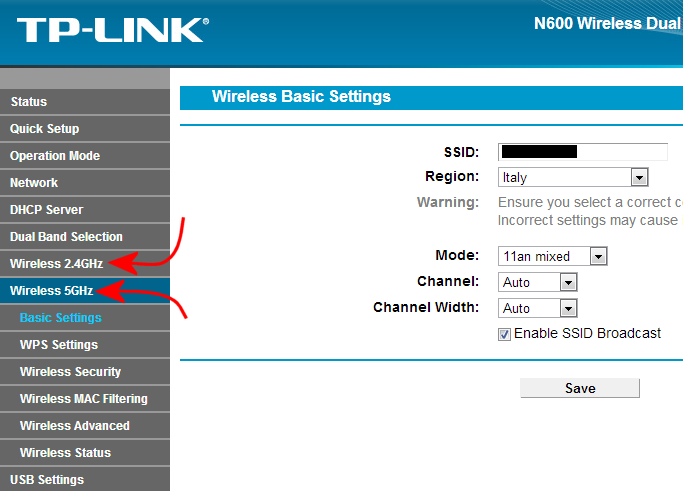 802.11n is the WiFi standard that currently lets you reach the best speed performances that, for example, let you stream HD videos, through the local wireless network, without any problem and with no interruptions. To be able to get the best performances, it’s required that the client devices support the data exchange by using 802.11n.

Thanks to the possibility to use more antennas to transmit and receive the signal (MIMO), most recent routers let you increase the available bandwidth and guarantee further increased speed performances. The standard’s real speed is 300 Mbit/s.

The support for WiFi at 5Hz will be gradually extended as soon as the new 802.11ac specs will be officially approved.