Which is better: the iPhone or a top-of-the-range Android smartphone? Don’t look at the specifications

Let’s clear the field of misunderstandings right away: while it is possible, of course, to compare the features of the iOS and Android operating systems, thinking you can compare the technical specifications of the iPhone with those of Android smartphones is a mistake – and also pretty sketchy -. Let’s see why.

Which is better: an iPhone or an Android smartphone?

When you try to compare one of the latest iPhone models with a top-range Android smartphone, you’ll be often shocked to hear that Apple phones only integrate 2 GB of RAM, whereas with one of the most convincing Android devices have at least 4 or even 6 GB of RAM.  (Read More: How much RAM does Android smartphone need?)

Only the iPhone 7 Plus has recently introduced 3 GB of RAM (DRAM LPDDR4).

Still, an iPhone can guarantee high performance, absolutely comparable with those of “rival” smartphones in the Android universe..

So much so that – with the passage of time – different forks of Android were created, i.e. versions derived from the original Google code. Just think about Amazon’s FireOS, RemixOS and to all the various Android “custom ROMs” (i.e. CyanogenMod) installed on mobile devices.

Android must, therefore. have to deal with thousands of possible hardware configurations, completely different from each other.

It is therefore quite impossible to act at its source to implement specific optimizations, which Apple, instead, can safely take: iOS follows, step by step, the development of new generations of iPhone.

It follows that both the operating system and applications on Android, will require more RAM memory than iOS which, amongst other things, is well known for its “inclination” to close any unnecessary services, so as to improve performance and increase the autonomy of the iPhone battery.

Android has made huge strides forward with the arrival of the 6.0 Marshmallow release: thanks to Doze, to the “green robot” can significantly reduce the impact on battery life with various apps.

Some manufacturers have also joined “proprietary” systems to improve the situation but sometimes have side effects such as the failure to receive instant notifications by – for example – of messaging apps. In these cases, you must access the settings and remove restrictions on each individual Android app.

While iOS (UNIX derivation) uses code compiled for specific Apple devices, Android devices are based on the Linux kernel 3.0 (from release 4.0 onwards) and on a Dalvik virtual machine which was later replaced by the faster new engine ART. 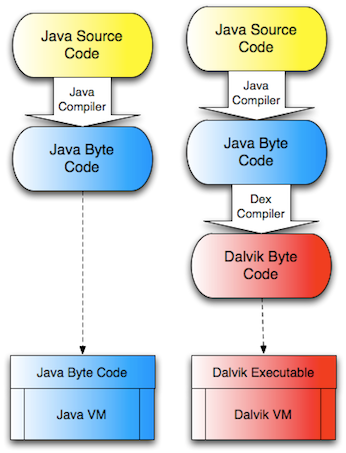 Historically, Dalvik has helped to solve compatibility problems with mobile devices which are totally different from each other thanks to the use of the virtual machine.

As with ART (Android Runtime), Google has tried to narrow the “gap” with iOS by presenting a mechanism that makes the compilation of the AOT app code (ahead-of-time).

That is, the code is compiled when you install an app and not during its execution, a clear advantage in terms of performance and resource management.

The downside is the greater time required to install the application; an aspect which is still well managed thanks to the best hardware equipment of Android devices on the market.

ART was officially introduced in Android 5.0 Lollipop, even if the first part debuted with Android 4.4 KitKat. 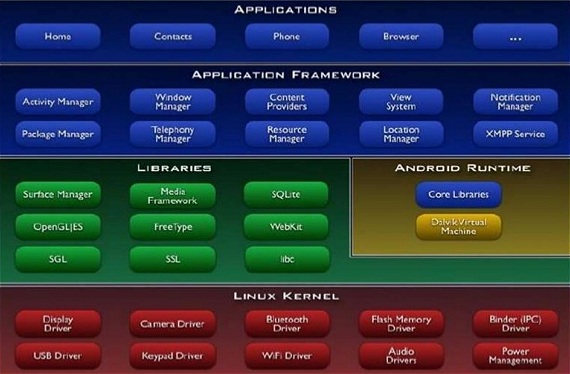 The “freedom” of installing Android on a plethora of completely different devices from each other, without the limitations that Apple imposes at the “factory,” is – at the same time – a mixed blessing for the Google operating system.

It is the skeleton key that allowed Google to gain vast market share worldwide but it is also the reason why the equipment of a top-range Android device is considerably higher than that of a ”commercial equivalent “Apple product.

In short, Apple is able to optimize at the very most its hardware, which is why in addition to a smaller RAM, optimal performance is still guaranteed by using processors (SoC system on a chip) with fewer cores and lower clock speeds.

The Apple A9 processor which “pushes” iPhone 6s, iPhone 6s Plus and iPhone SE, for example, has a dual-core 1.83GHz while, for example, the Qualcomm Snapdragon 820 is a quad-core SoC which works at frequencies of 1.59 GHz to 2.15 more (the processor uses, among other things ARM big.LITTLE, heterogeneous architecture that allows you to combine less performance cores which is more economical in terms of energy consumption with higher performance core; big.LITTLE was also used by Apple for the new A10 Fusion, used in the iPhone 7 and iPhone 7 Plus). 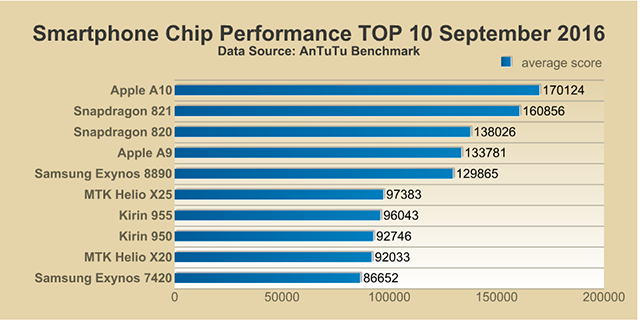 To get a better idea of the processor’s true capabilities, refer to the benchmark AnTuTu, at this address.

In terms of multitasking, Android wins across the board. Although the latest iOS versions introduce several enhancements, support for multitasking directly depends on the classification of the app in the App Store from Apple. The approach is, again, a direct result of Apple “settings” in which the Cupertino company aims to manically control the operating system’s functioning.

Android, however, does not impose any type of restriction and multitasking is truly real.

That’s why it makes no sense to directly compare the technical specifications of an iPhone with those of an Android smartphone. The important thing, regardless of hardware equipment of one or the other device, is that apps work well, smoothly and without delays.

Apple’s Retina display is IPS LCD, which is only in the Plus models (iPhone 6s Plus and iPhone 7 Plus) are Full HD 1920×1080 pixels at 401 PPI(in the “normal” models it goes down to 326 PPI). According to Apple, in fact, there is no use dramatically increase the resolution if the human eye can not discern individual pixels that make up the screen to the normal distance at which you are using your smartphone.

On Android, therefore, it is better to choose a smartphone based on more than resolution (the value of pixels per inch is indicative and should never be less than 300) of the points display a lot about color rendering and a rich range of colors.
Displays with “incredible” resolutions “incredible” contribute – in the first instance – to “bury” the autonomy of the device and require more computational power for the GPU.

It is precisely for this reason that Apple terminals can always integrate batteries of limited capacity – for now never more than 2,900 mAh (iPhone 7 Plus) – while Android on a 3,000 mAh battery now represents the “minimum wage.”

The overall better user experience guaranteed by Android, especially in terms of “freedom of action” (Apple’s efforts in maintaining its platform are known for being “closed” and usable by developers following the rules and using channels…), is not up for discussion. Android devices are capable of offering greater versatility – much more than “Apple” offers-.

Nevertheless, when choosing whether to buy an Android mobile device or an iPhone, you must remember to refrain from making direct comparisons on the technical specifications.